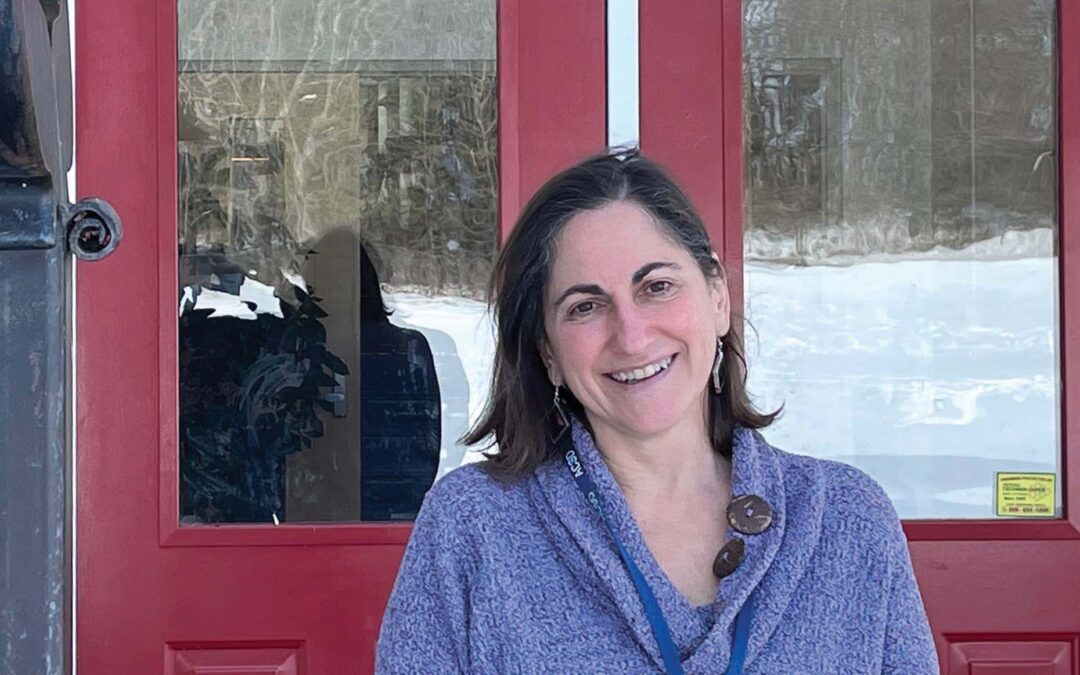 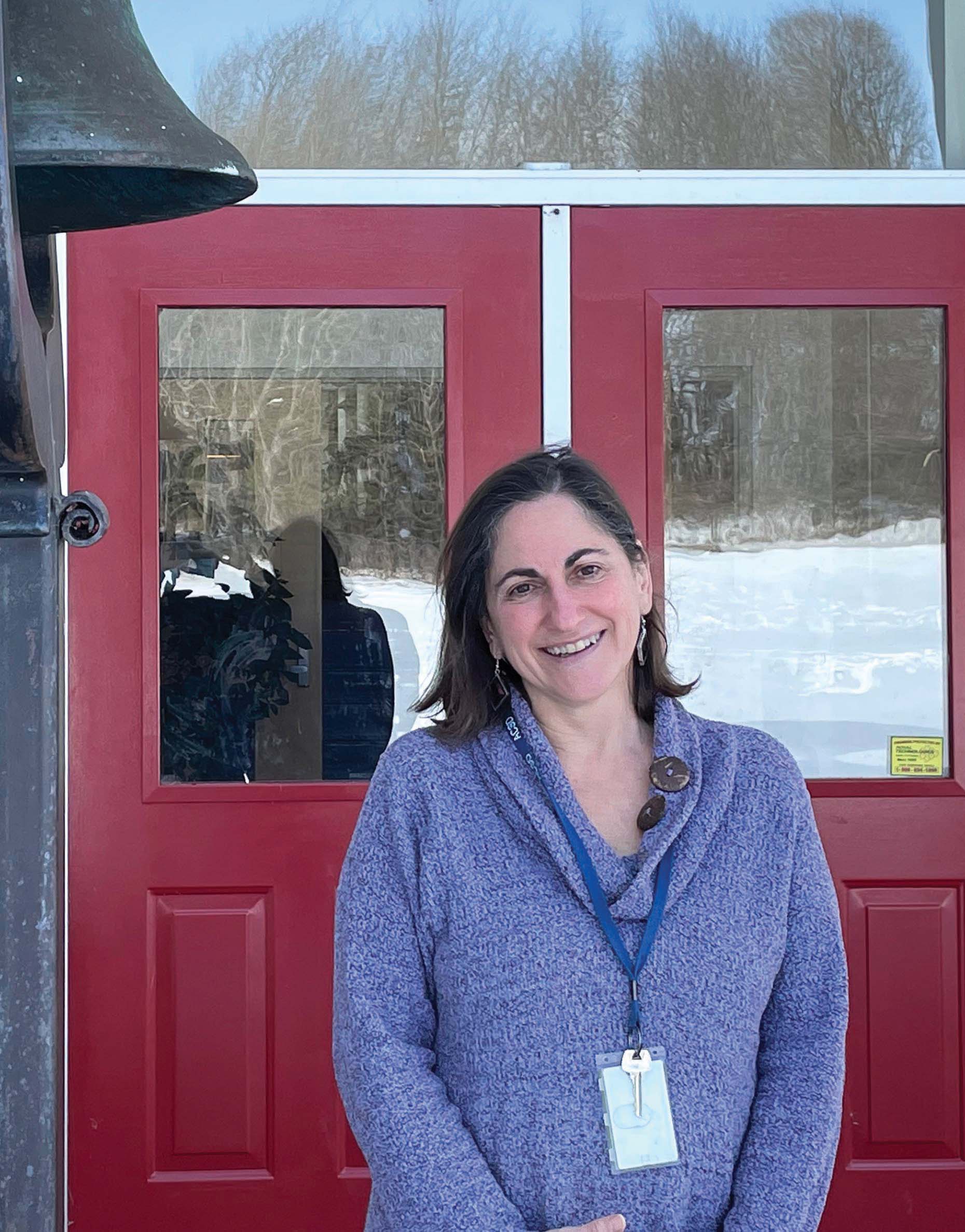 LONGTIME SALISBURY COMMUNITY School Principal Fernanda Canales, shown outside the school with the old school bell, is stepping down this June to embark on new adventures.
Independent photo/John Flowers

SALISBURY — Being bilingual, well-educated and dedicated, and with a history of international travel and effective leadership, Fernanda Canales could have had her pick of many teaching jobs.

Yet all roads led to Vermont and ultimately to the Salisbury Community School, where she will cap her 16th — and final — year as principal. With 39 years now spent in education, Canales is ready to graduate to a new raison d’etre outside of a school building.

“It’s been an amazing journey for me, and I feel I’ve become a better self from having experienced what I experienced working here and in Salisbury,” she said during a recent interview in a principal’s office replete with drawings and crafts given to her by some of her biggest fans: the legions of children that have benefitted from her educational stewardship, constant words of encouragement and the occasional hug.

Her retirement will come this June after a worldwide odyssey.

Canales was born in Argentina to a Chilean couple. She arrived in the U.S. at age 14 with no knowledge of English. Undaunted, she jumped into the deep end of the language pool — a school in Ohio where no one spoke Spanish.

“It was quite challenging,” she said of her introduction to eighth grade.

Canales barely had time to unpack her bags before her family received new marching orders — to Tehran, Iran, where they would spend the next two years. It was there, ironically, that she improved her English skills while witnessing the beginnings of a revolution that would see Shah Mohammad Reza Pahlavi of Iran overthrown and replaced by the Ayatollah Ruhollah Khomeini.

“We left nine months before the (1979) revolution,” she said. “My graduating class from Iran all had to be evacuated.”

She and her folks landed in Massachusetts, where Canales would attend Boston College. After toying with the idea of becoming an architect, she decided to pursue a career in teaching. She earned a bachelor’s degree in education from BC, and then a master’s from Antioch University New England in Keene, N.H.

While at BC, she worked summers at the Walker School in Waltham, Mass., helping boys diagnosed with emotional problems.

“I experienced the difficulties of being a non-English speaker in a school,” she said. “From very early on, I was leaning toward helping kids with challenges.”

Along the way, she met her future husband, Chad Chamberlain, a fellow educator and former wilderness instructor who yearned for a more rustic life experience. He’d purchased land in Goshen in 1983 with the idea of settling there someday.

And “someday” came in 1988, when the young couple made the big move.

“I was a total city girl,” Canales chuckled. “I didn’t know what a cucumber plant looked like until I was 21 years old. I had no idea how they grew.”

But she’s a quick learner. Just as she was thrust into an all-English school years before, she had to learn homesteading on the fly — and for long stretches with just her and the couple’s baby daughter. Chad needed to serve out a final year on his teaching contract in Massachusetts, so he’d leave Monday nights for Massachusetts and return home to Goshen Thursday nights.

“Our ‘dates’ were clearing the land and getting the cabin built very roughly,” Canales said.

“I think back to that time very fondly.”

She began her career as a Vermont educator in 1990, as a librarian at Sudbury Elementary. It’s a role that soon expanded to include a grade 3/4 teaching gig. The local school board liked her work, to the extent they promoted her to teacher-administrator at what was a three-room schoolhouse.

She threw herself into her work, and became smitten with the small-school aura and dynamic.

“There’s a sense of community in (rural schools) that’s so powerful,” she said. “You really see the fruits of your labor. You can enjoy the impact that you have and the positive impact you can make.”

Though Canales was still enjoying her Sudbury School duties, she decided to test the job market during her 16th year there. Her dual role at Sudbury was yielding only part-time (80% FTE) pay. And it was becoming increasingly likely that declining student enrollment would force the town to close its school and merge with nearby Leicester and Whiting.

Since Canales was the junior teacher at Sudbury School, she was at most risk for being laid off in a school consolidation.

One career door seemed poised to close. But that’s when another door opened: At Salisbury School. Canales successfully applied for the principal’s job during the spring of 2006. Receiving the job offer was a highlight of her life, though the news came the day after one of the worst days of her life: A fire that ravaged her family’s Goshen home.

“Our family was homeless, we were staying with friends, and I was looking through a bag of donated clothing for me to wear, really struggling,” Canales recalled. “Then the call came. I was thinking, ‘How can I decide this? I can’t even decide what (clothes) to put on today.’”

She went on a walk with her husband to clear her head and take new stock in her professional future.

“My husband said, ‘All the reasons you wanted this job in the first place are still there; the (homeless) situation we are in is temporary.’” Canales said of her spouse’s advice.

She took that advice, and has never regretted it.

Oh, it was a challenge at first. Fernanda and Chad had to rebuild from the house fire, and by this time had two young children. They sought shelter at four different venues — including a hotel — from April through the end of November of 2006. Fittingly, they finally got back into their amply renovated home around Thanksgiving.

Canales immediately took to the Salisbury School, and resolved to make it another long-term stay, akin to her Sudbury experience. After all, longevity builds continuity, trust and relationships. She believes it takes five years to establish a meaningful footprint in a job.

“By staying, I could build some strong relationships that develop trust and understanding,” she explained. “That’s the beauty of this school right now. We have gone through much together and we have a level of knowing one another. My families know me and I know my families. The staff knows each other, and we support each other. Being 16 years in this school helped me develop those strong relationships and really take our work forward. We could take risks and try things that were significant.”

Among the significant changes: The ACSD’s transition to the International Baccalaureate program. Canales was — and still is — a big fan of the curriculum and its ability to make children lifelong learners plugged into a global community.

She could have never imagined having to lead a school community through a two-year-old COVID-19 pandemic that has yet to be extinguished. But she, her colleagues and the students are still standing.

Canales will leave Salisbury School with the ACSD at a crossroads. With declining enrollment and rising school costs, district officials must decide which ACSD buildings deserve ongoing investment and which should be shuttered. The town of Ripton is withdrawing from the ACSD in an effort to protect its tiny elementary school from potential closure in the future.

Salisbury School isn’t immune to the demographic shift. It consistently served around 100 students until about two years ago, when enrollment dipped into the 80s. The school currently counts 61 children through grade 5. Salisbury and the six other ACSD elementary schools took a big population hit last fall with the transition of all sixth-graders to Middlebury Union Middle School.

“We’re at our lowest (student count) since I’ve been here,” Canales said.

The ASCD board is facing some unenviable decisions, she noted.

“People feel really strongly about what they think needs to happen,” she said. “I really don’t have the solution and I don’t think any solution is going to make everyone happy. But I do think we need to keep an eye on what the kids and the families need, and the best way to offer that.”

Fernanda Canales is a young 61, and she wants you to know that she’s not leaving Salisbury School because she’s “burned out.” It’s because she believes she has more of herself to give in different arenas where her considerable skills — compassion, intelligence and command of two languages — are in demand. One of her goals: To assist the county’s migrant community, to build bridges between non-English and English speakers in Vermont.

“I have a bucket list that’s very long and an appreciation for the fact that life is finite,” she said. “I’m also interested in working part-time in something else that is using some of my other skills that this job hasn’t required. Ideas are already coming to me. It’s really quite lovely to think it’s not a blank slate.”

Along with helping others, Canales wants to spend more time with her two young grandchildren and embark on new adventures with her husband. That will most certainly involve a vehicle with a vintage teardrop camper in tow.

“It’s our hope to travel through the country,” she said, beaming. “I want to see every national park. There are places I haven’t visited yet, and there’s so much natural beauty out there.”

Plenty of folks have been spending a lot of time lately thanking Canales for her service to Salisbury School.

“Fernanda has been such a heartfelt, strong leader for Salisbury Community School,” said ACSD Superintendent Peter Burrows. “She is beloved in her community for leading with compassion and integrity, and it’s hard to imagine Salisbury School without her there. Her impact runs deep. I will miss so many things about her, and am so thrilled that she now has more time to explore the world with her husband, Chad, and spend time with her grandchildren.”

The change of scenery will be difficult, at first.

“Not seeing children on a daily basis will be hard,” Canales said.

Leading a school, she added, “is really a life, not a job.”