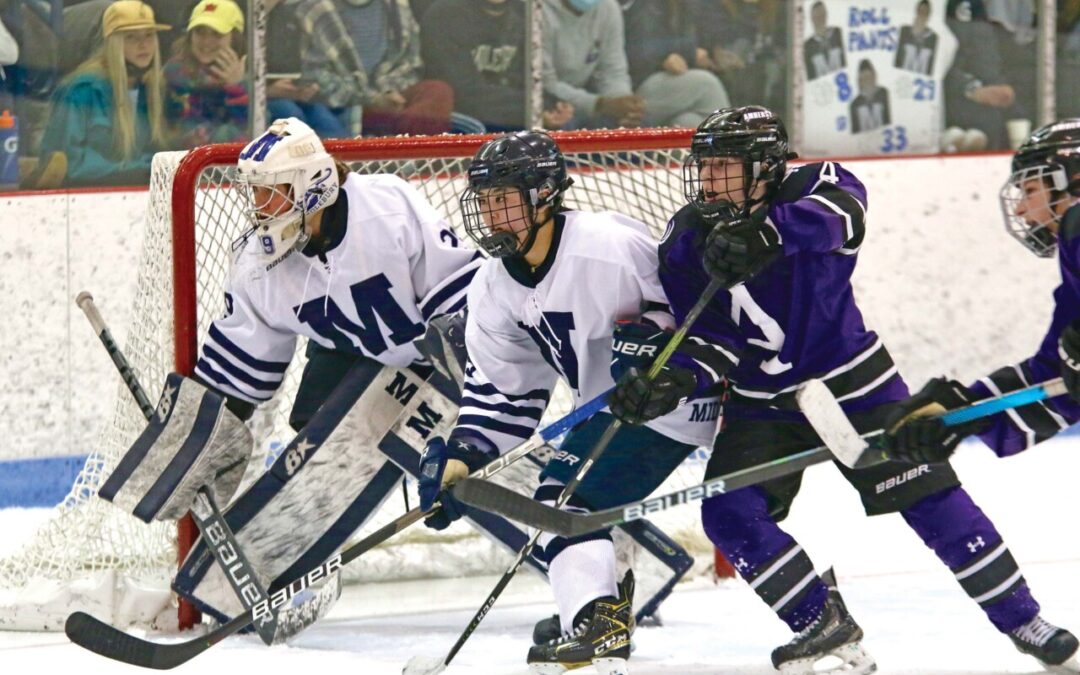 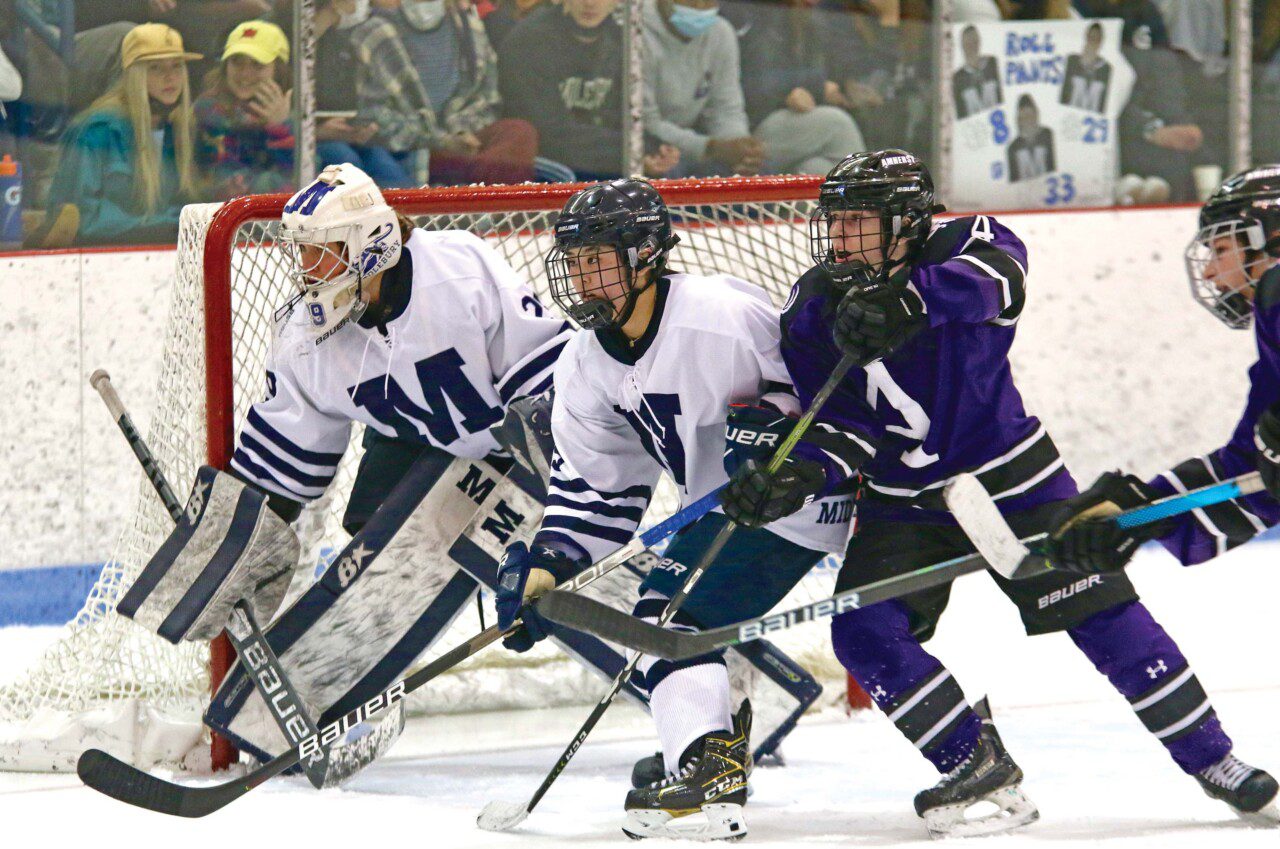 MIDDLEBURY — The Middlebury College women’s hockey team continued to make history this past weekend, and the Panthers are looking to make more.

On Sunday top-seeded host Middlebury captured its 11th NESCAC title with a dominant performance against No. 3 seed Amherst in a 2-0 victory.

That result in front of more than 1,000 happy fans pushed the Panthers’ record to 24-0, tying the program’s mark for consecutive wins that dates back 16 years.

That effort came after the Panthers toughed out a 3-2 semifinal victory over No. 4 Hamilton on Saturday, twice overcoming one-goal deficits.

Next up for the Panthers is a home NCAA Division III quarterfinal vs. Endicott (19-4-1). Middlebury defeated Endicott twice this season by 2-1 scores, once in overtime after tying up the game in the final minute, but rolling up big advantages in shots on goal in each outing.

The NCAA final four will be held at a site to be determined on March 18 and 19. Middlebury has not hosted a final four in several years, its team is ranked No. 1 in the polls, and Kenyon Arena would seem a logical choice as the host site if the Panthers get past Endicott. 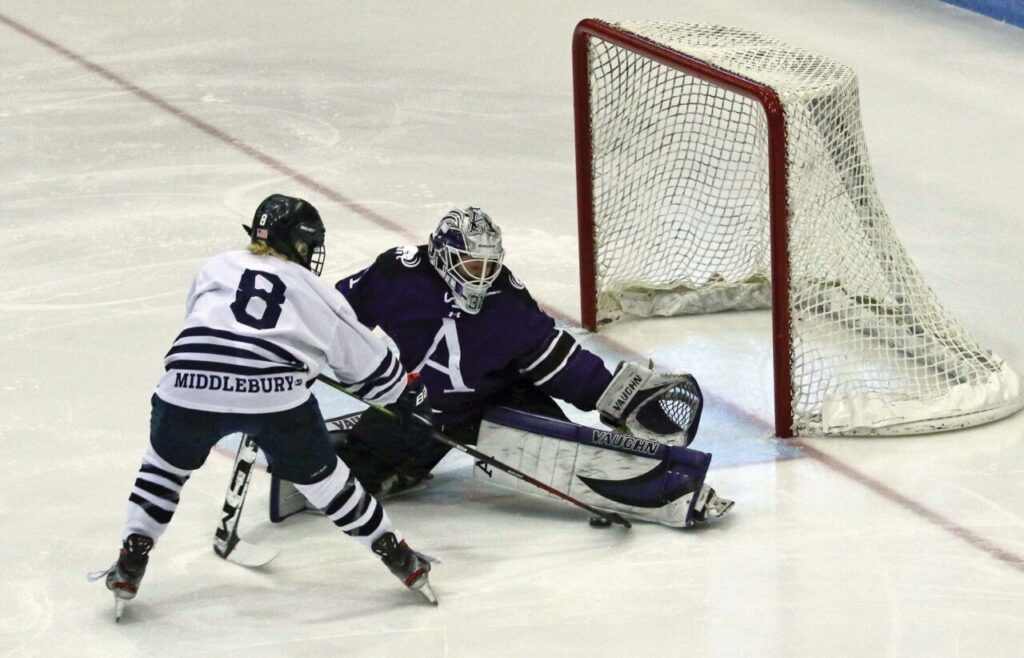 Before the Panthers could think about winning the program’s first NCAA title since 2006 and fifth overall, they had to take care of business this past weekend vs. Hamilton and Amherst.

Coach Bill Mandigo was pleased with the Panthers’ efforts, especially in the title game after Hamilton gave them a battle the day before.

“They played very well (on Sunday). I thought they played hard on Saturday, too. I think there were moments in the third period where the score might have got to them,” Mandigo said. “That was a real nail-biter… We had trouble getting the puck out of the zone at times. But we hung on and figured out a way, like we’ve done all year.”

On Sunday he said the Panthers put it together from start to finish.

“They forechecked hard, they backchecked, they played great defense, the goalie (Sophia Merageas) was outstanding when she needed to be,” Mandigo said. “Their goalie is very, very good, but we found a way to put the pucks in the net.”

The Panthers had a chance to take the lead on the No. 3 Mammoths, who finished at 14-9-2, in the first minute. But Amherst goalie Caitlyn Walker made the first of her 36 saves by flashing her left pad to deny Cat Appleyard’s break-in from the right side.

In the seventh minute Walker stopped Jenna Letterie from the right circle, and Madie Leidt and Letterie created other chances as the Panthers outshot Amherst, 12-5, in the period.

The Mammoths had one good opportunity, but Merageas denied Angelina Wiater cutting into the slot, and Rylee Glennon slid the rebound wide under pressure from Panther defender Eva Hendrikson.

The Panthers outshot the Mammoths in the second period, 14-2. In the third minute Walker denied Letterie, and the rebound bounced away from the charging Leidt. Seven minutes in Appleyard’s screened shot from the left circle went off the tip of Walker’s glove and fluttered over the crossbar.

At 7:40 the Panthers went on a power play in which their best bid was a Claudia Vira blast from the center point that Walker kicked aside.

As the penalty wound down the Panthers set up a similar play. Raia Schluter slid the puck over to Vera in the same spot, and this time Vira’s shot through traffic went in between Walker’s pads for the lead, three seconds after the power play ended.

Walker preserved the one-goal margin with a glove save on Leidt with about 4:00 to go in the period with the Panthers on another power play, and shortly afterward stopped Vira again.

Merageas made six of her 13 saves in the third period, starting by denying Wiater from the high slot two minutes in. Vira also denied a Rylee Glennon solo rush two minutes later as the Panther defense continued to excel.

Walker stopped a point-blank Leidt backhand from in the seventh minute and Maddie Bayard from the slot two minutes later.

Middlebury, which skated four lines as opposed to Amherst’s three, looked like the fresher team in the third period and outshot the Mammoths by 10-1 over the first 11 minutes of the period. But Amherst managed one last flurry over the next three minutes in which they forechecked hard and forced Merageas to make a couple stops.

But the Panthers put the game away on a counterattack that created a Katie Hargrave goal. Letterie carried from center ice into the Amherst zone and fed Leidt on the left. Leidt skated to the bottom of the circle and fed Hargrave charging the far post, and she backhanded the puck home with 6:08 to go. 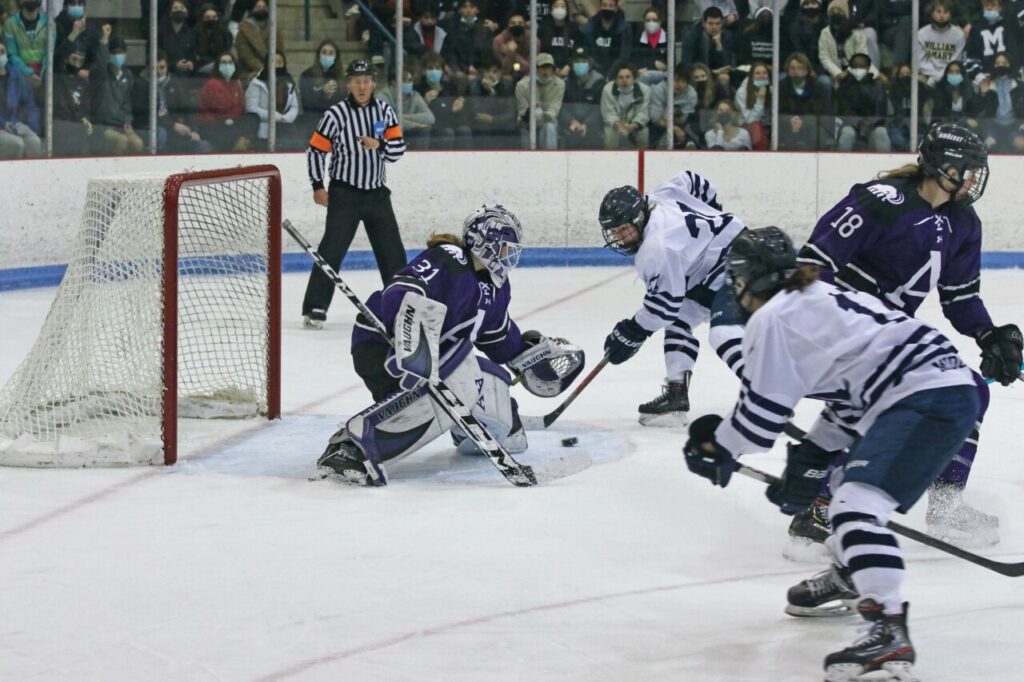 “Claudia can really rip it, and Jenna, Madie and Katie Hargrave, who tucked it in, have been bread and butter for us all year,” he said.

And he said the poise and puck movement of his defenders — Hendrikson, Sabrina Kim, Vira, Alexis Ryan, Julia Johnson and Cece Ziegler — were major factors.

“We talked all week long about keeping it simple, make the simple play, make the early play, don’t over stickhandle, and give it to the forwards so they can go,” Mandigo said. “In the offensive zone we worked on that all year long, D to D passes along the blue line, and then either distributing it or finding a forward who’s in a good spot somewhere.”

On Saturday, Hamilton (12-10) took two leads before the Panthers prevailed, 3-2.

Hamilton’s Nancy Loh made it 1-0 at 7:20 of the first, netting her own rebound after Merageas denied her first shot from the doorstep.

The hosts pulled even with 5:26 left in the period, when Madie Leidt one-timed home her 17th goal of the season on a Letterie pass.

Hamilton regained the lead 3:08 into the second period, when Jess Haviland knocked in a rebound. At 10:53 Vira intercepted a clearing attempt, skated between the circles and fired a shot over Hamilton’s goalie Sidney Molnar’s glove. 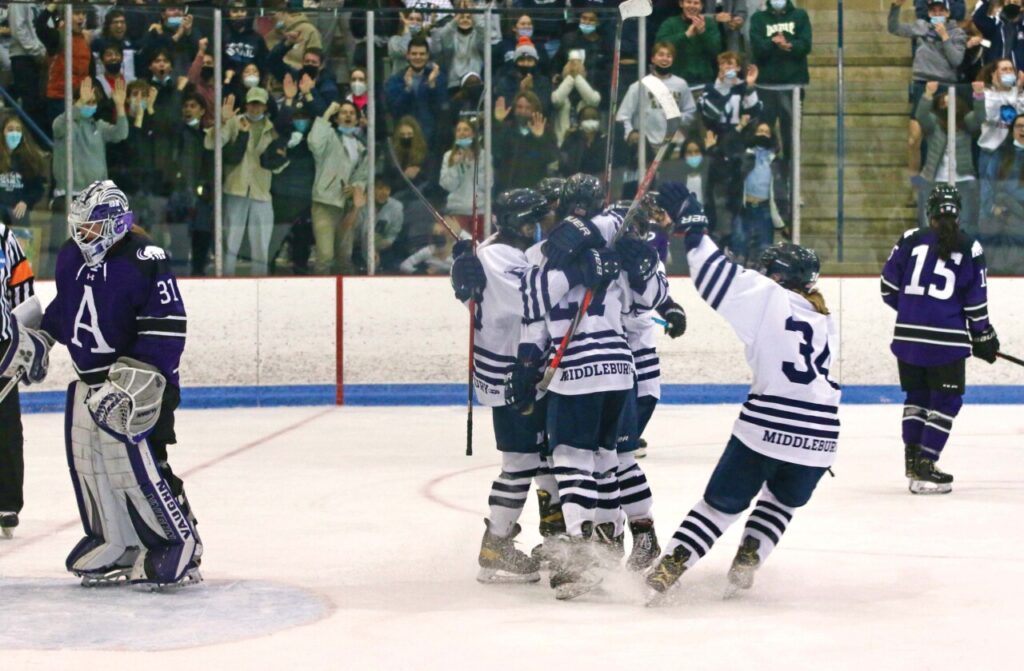 THE PANTHER WOMEN’S hockey team — and some of the thousand-plus fans in attendance — celebrate Katie Hargrave’s third-period pad goal during Middlebury’s 2-0 win over Amherst in Sunday’s NESCAC final. The Panthers will host Endicott in an NCAA game this Saturday.
Independent photo/Steve James

Caroline Cutter gave Middlebury the lead with 3:14 left in the period by deflecting in a Hendrikson shot from the right point.

In the final period, Hamilton had back-to-back chances with just over five minutes left. Merageas thwarted Haviland from close range and swept away the rebound, and soon afterward handled an Abby Kuhns point shot through traffic. The Panthers allowed only one more shot.

Merageas made 16 saves, while Molnar made 35.

Moving forward Mandigo knows after 33 years on the job anything can happen in a low-scoring goalie sport. But he acknowledged depth, goaltending, home ice and Leidt, the NESCAC Player of the Year, are working in the Panthers’ favor.

“I tell them all the time you can beat anyone in the country. Unfortunately if you don’t play your best you can get beat by anyone in the country,” he said. “But they worked hard to get home ice. We’re playing in Middlebury on Saturday, which is a huge deal. People don’t like playing on the big ice. The other factor is we’ve got Madie Leidt, and nobody else does.”