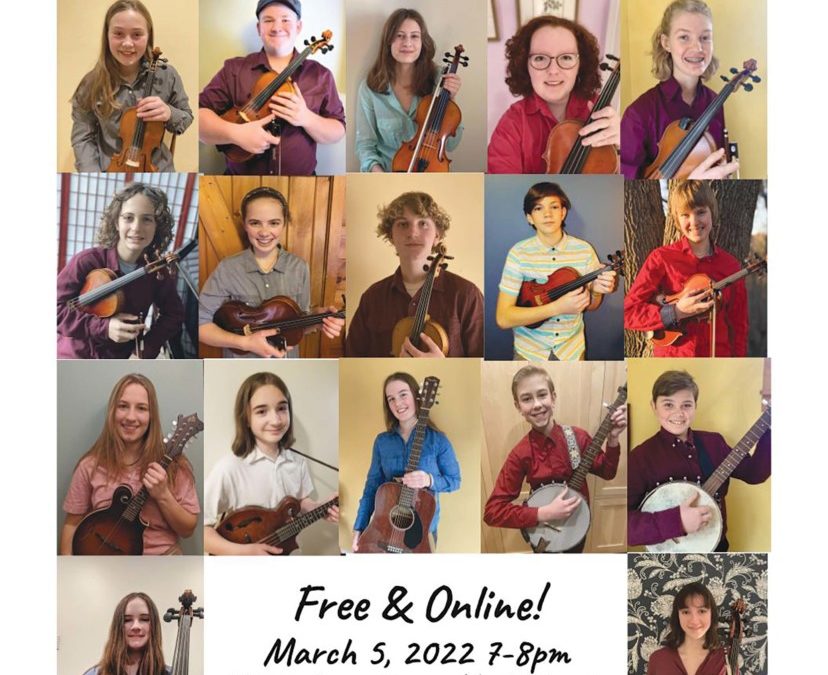 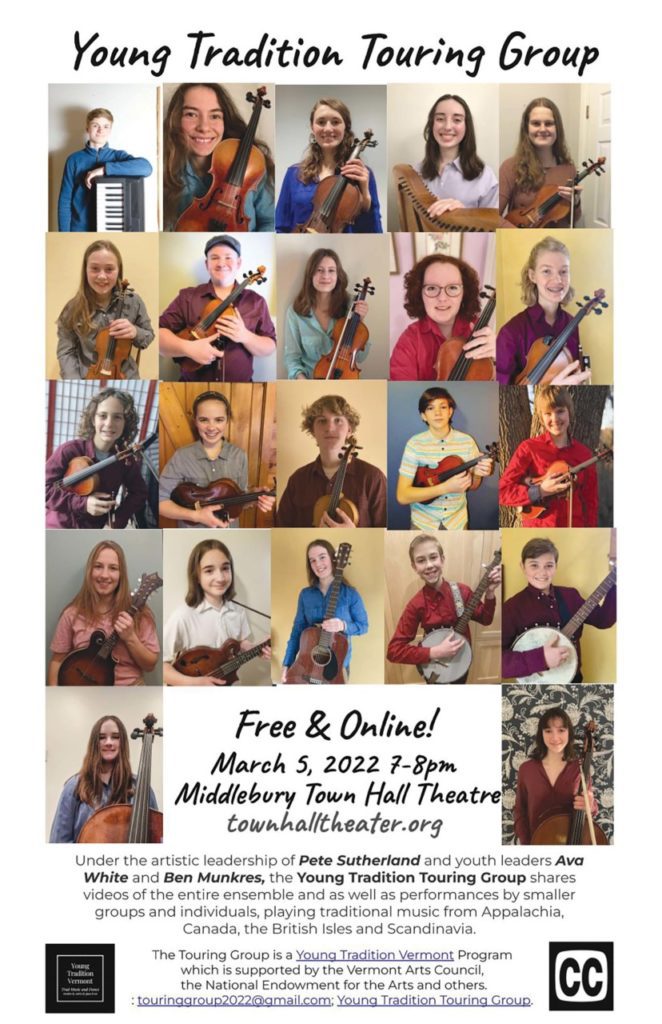 The Young Tradition Touring Group will perform a 60-minute online concert on Saturday, March 5, starting at 7 p.m. via Town Hall Theater’s YouTube platform. The show will feature the ensemble, solo and small group performances by the 22 teen members of the Touring Group, under the artistic leadership of Pete Sutherland and youth leaders Ava White and Ben Munkres of Cornwall.

The Young Tradition Touring Group is composed of teens who focus on learning and performing traditional music and dance from Appalachia, the British Isles, Canada and Scandinavia over the course of a nine-month season, September through May, including an April performance tour. Group members hail primarily from Vermont, but also include members from Maine and Massachusetts. Representing Addison County are Munkres and East Middlebury resident Anya Hardy-Mittel.

Group members learn from and are supported by artist leaders and master musicians, in addition to musical exchanges with master artists, young musicians and dancers while on performance tours. Touring Groups have previously traveled to Scotland, Cape Breton, England, Ireland, Japan and New York/New Jersey. Because of COVID-19 restrictions the group has been meeting online and will be traveling virtually to Quebec, where a living musical tradition is still strong.

To perform as an ensemble online, the group has been recording several video projects produced by Munkres. Interspersed among the ensemble recording projects will be solo and small group pieces by group members. Group members will host the program in real time and introduce their pieces. The group has been performing online in lieu of in-person performances. They were well-received at Highlight: Burlington’s New Year’s Eve as well as at Project Independence.

After the show on the Town Hall Theater’s YouTube platform, they will be featured at the New England Folk Festival Association’s Weekend on April 22, 8-9 p.m., also online and free. They will perform live and in-person on the Main Stage at the Vermont Maple Syrup Festival in St. Albans, April 23, 12-1 p.m., for free. Their final appearances will be at the Young Tradition Vermont Festival weekend in Burlington, May 6-8, currently offered as in-person, ticketed events.

The group is managed by Kristin Bolton, with the support of Young Tradition Vermont’s Executive Director Mark Sustic. Learn more at youngtraditionvermont.org or on Facebook @YoungTraditionVermont. To access the free live stream for the March 5 concert, visit townhalltheater.org.