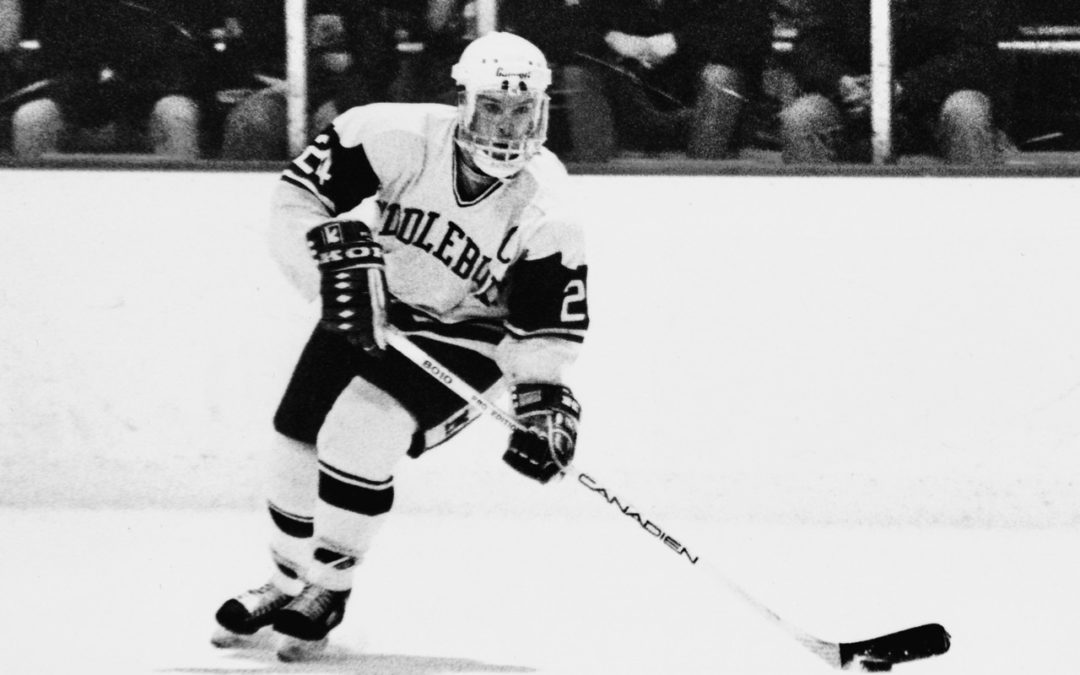 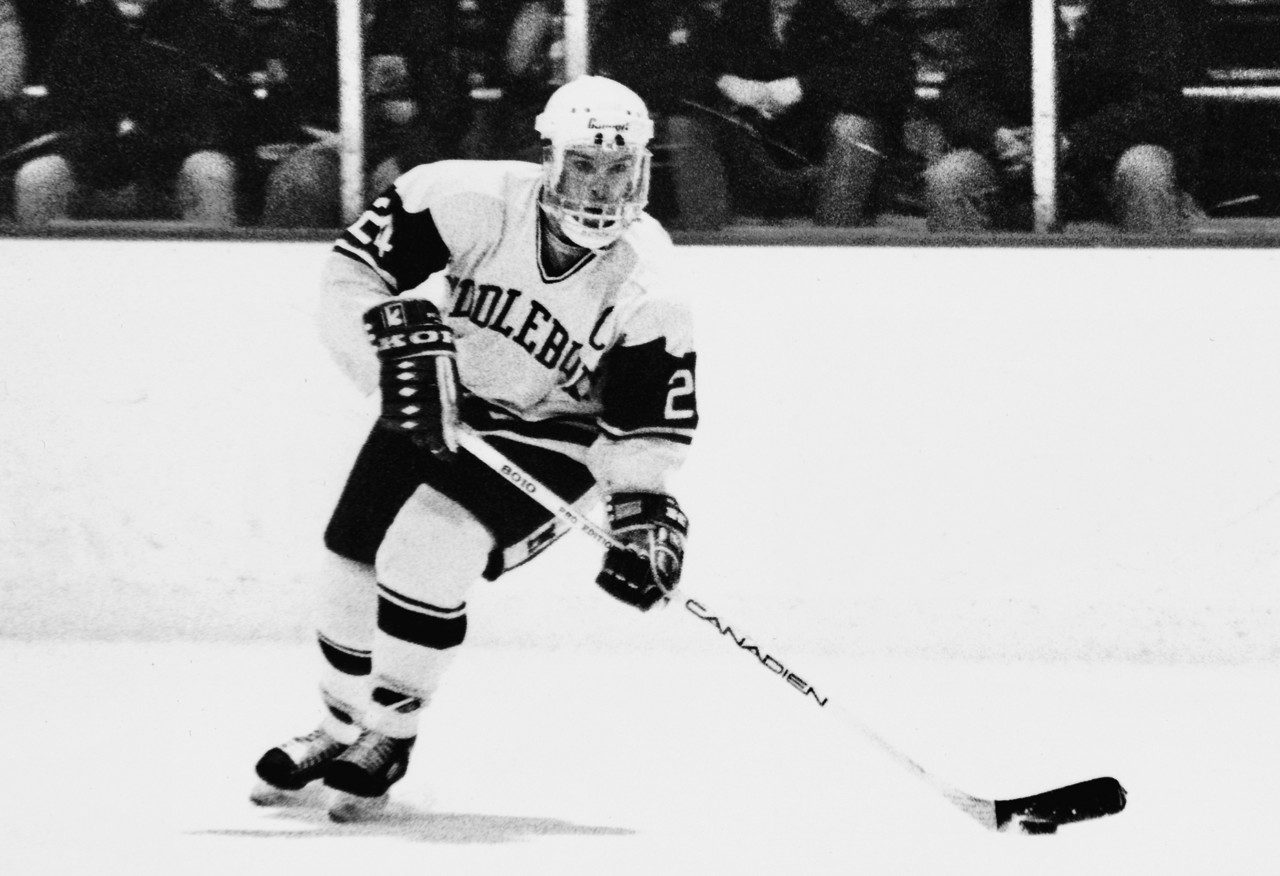 1992 MIDDLEBURY COLLEGE graduate Kent Hughes holds modern-day records at Middlebury for most assists and most points in a career. He was captain of the ECAC championship team and an All-American and national Player of the Year in 1992. Photo courtesy of Middlebury Athletic Communications

I grew up in a hockey town, Lewiston, Maine. Not really a town, Lewiston is the second largest city in the state (population, 37,000), and it’s right across the Androscoggin River from Auburn (24,000).

The Bates Mill that dominated the industrial landscape in Lewiston was named after Benjamin Bates, after whom the college there is also named. The population of Lewiston was not predominantly French-Canadian, it was overwhelmingly French-Canadian. The city’s nickname was “Little Canada.” I grew up an anglophone in a francophone city, a fascinating cultural context for which I am eternally grateful. 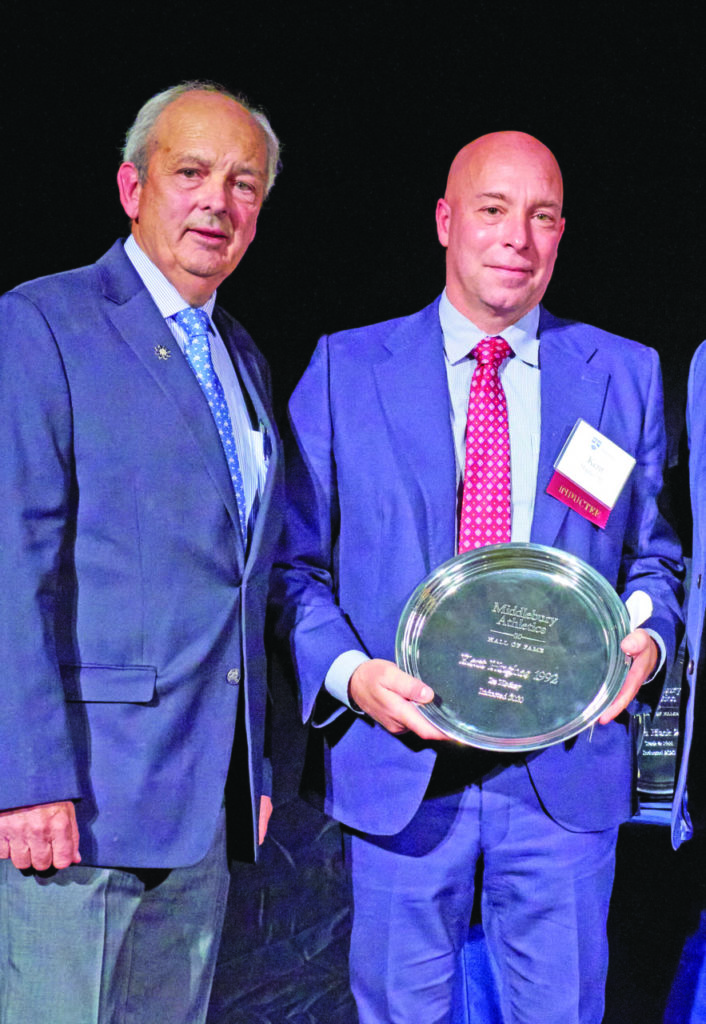 My best friend in high school was John Bouchard, universally known as “Butch.” His dad Adrian and his mom Simone were both millworkers. They lived in a triple-decker in the shadow of the enormous St. Peter and Paul cathedral downtown. Butch had three older brothers, two of whom were also called “Butch!” Little boys all over Quebec (and Lewiston!) with that surname were bestowed the honor of that nickname after the Montreal Canadiens charismatic star defenseman Emile “Butch” Bouchard (1941-56).

Lewiston was hockey-mad. The high school team most years was the best in the state. Its chief rival was St. Dominic’s High, also in Lewiston, a Catholic school with instruction in French. We played our games in the Central Maine Youth Center, where Muhammad Ali knocked out Sonny Liston in May 1965

There were only six teams (Les equips originales) in the National Hockey League from 1942-67. The Canadiens, or the “Habs” (short for Les Habitants), were hockey royalty, with great players with cool names: the dashing centerman Jean Beliveau, goalie Jacques Plante, defenseman Bernie “Boom Boom” Geoffrion, Maurice “the Rocket” Richard, and his younger brother, Henri, the “Pocket Rocket.”

The Canadiens were the flagship team of the NHL in those days, a dynasty. Worship of the Canadiens in Quebec was described as a “civic religion.” The Canadiens have won the NHL Championship, the Stanley Cup, 24 times. The Toronto Maple Leafs are next with 13.

Manufacturing left Lewiston and the entire region long ago, though the French influence is still strong. In the NHL, the Original Six have been absorbed into a league with 32 teams, in cities that have never seen outdoor rink (“pond hockey,” what’s that?), such as Tampa Bay, Los Angeles, Nashville, Charlotte, Dallas, Las Vegas and Phoenix. The Canadiens have had nearly a 30-year drought since their last Stanley Cup win in 1993. Right now, the Canadiens have the worst record of all 32 teams in the NHL.

So the Canadiens have cleaned house, hiring a new VP of hockey operations (Jeff Gorton) and a new general manager, Kent Hughes.

Hughes is a 52-year-old hockey-lifer, a lawyer, who well knows his way around the NHL, having built a successful career over 25 years as an NHL player agent based in Boston (one of his clients is Bruins veteran star Patrice Bergeron).

This new directeur général, Kent Hughes, is a Middlebury College graduate, class of 1992. He was inducted into the Middlebury Athletics Hall of Fame just this last fall. At that ceremony, Kent’s coach, Bill Beaney, described his importance to the Middlebury men’s program as “a transformative influence, a literal game changer.”

THE STANLEY CUP is considered by many, including this author, the best championship trophy with the coolest traditions attending it in all of American professional sports. Kent Hughes, Middlebury ’92, the new general manager of the historic Montreal Canadiens, has been hired to return the Canadiens to Stanley Cup competitiveness.

Kent came to Middlebury in Bill’s third year as a coach when the Panthers had just completed their second straight 7-16-2 season. “Kent was the leader of a great freshman class,” Beaney said. “Over their four years they would win over 80 games and have five All-Americans. Kent was not only a first team All-American but was the Player of the Year in Division III.”

As local fans know, those Kent Hughes teams led to the extraordinary success of Middlebury men’s hockey in the 1990s and early 2000s when the Panthers under Coach Beaney won five consecutive NCAA championships from 1995-99 and then three straight from 2004-06, an amazing run.

Now Middlebury’s Kent Hughes finds himself the custodian of the fortunes of the Montreal Canadiens, this hockey institution, and is charged with returning the Canadiens to their winning ways, and perhaps to glory, an enormous challenge.

Kent was raised in Montreal and speaks French fluently, as do his wife, Deena, also a Montrealer, and their three young-adult children. Yet Kent is anglophone in a francophone culture and this issue adds to the pressure of the job. Watching Kent so skillfully handle himself in French and English in the January 18th press conference announcing his appointment is impressive indeed. (Check it out, easily accessed on the internet.)

Allison Hanes, a columnist for the Montreal Gazette, wrote recently about “the fraught history between anglophones and francophones and the Canadiens’ delicate place at the crossroads of Quebec culture, language, identity and politics.” She acknowledged that “Hughes is under intense pressure to rebuild a floundering team.”

In accepting this challenge, Kent said in the press conference, “It’s Montreal, the city where I grew up, the most decorated franchise in hockey history.” He said he was advised by a friend, “’Kent, it’s the New York Yankees, it’s the Dallas Cowboys, it’s the Montreal Canadiens. Come on, you don’t have a decision to make.’”

It’s as if it’s his responsibility. Bill Beaney asserts, “He’s ready; he’s the right man for the job. He can do it.”

As for his many friends and admirers in Middlebury, ses amis, they send their warm best wishes and a hearty bonne chance!