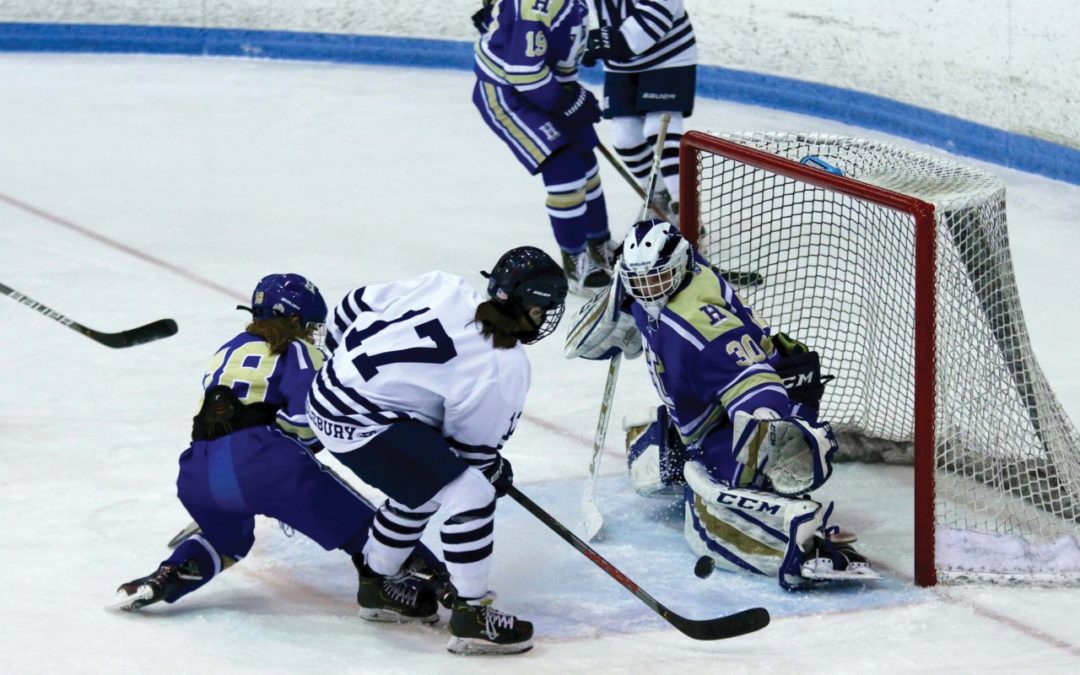 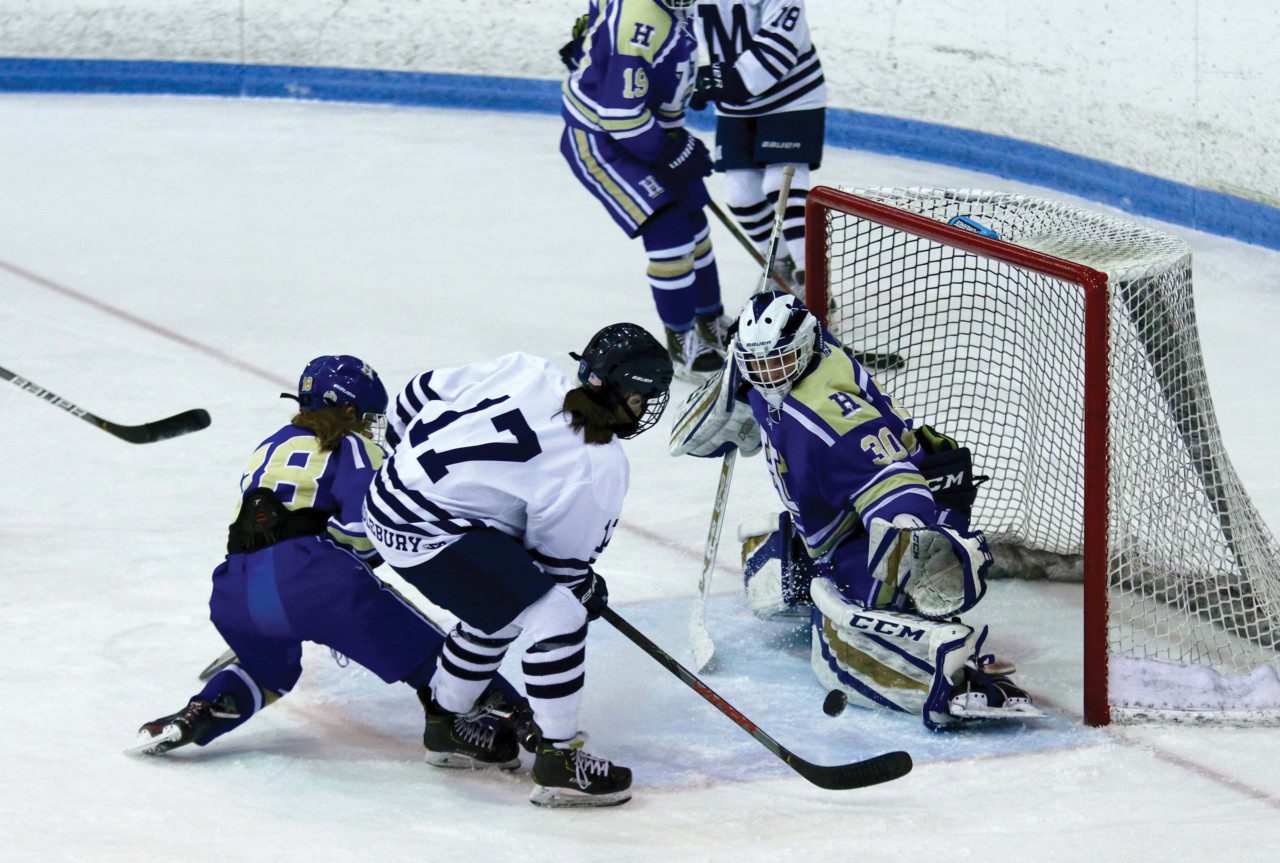 PANTHER MADIE LEIDT fires on the Hamilton net in a NESCAC semifinal in 2020. The Connecticut native had to choose between hockey and soccer for college sport. She says she chose hockey because she loves it. Independent file photo/Steve James
By Blaise Siefer 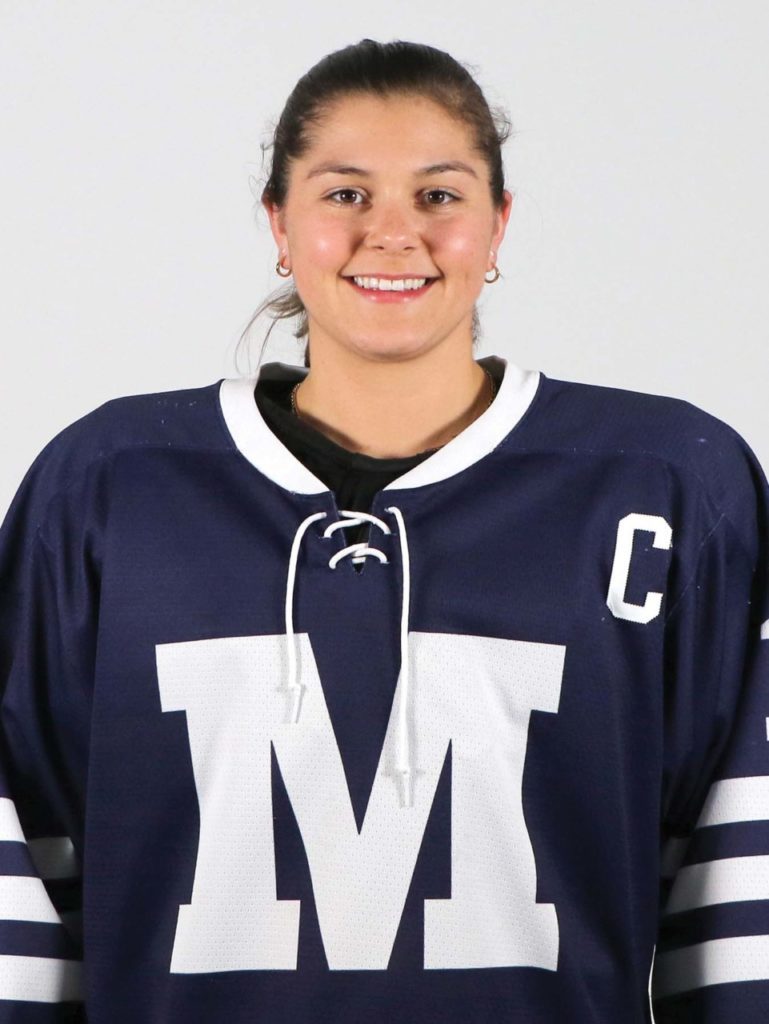 MIDDLEBURY — Few people love hockey as much as Madie Leidt, a senior on the Middlebury College women’s hockey team.

When she’s not fist-pumping or knee-sliding after scoring a goal, Leidt is standing at the center of a huddle, energizing her teammates. She couldn’t hide her emotion if she tried.

“I love winning. Hockey has this different feel to it. The environment is so intense,” Leidt said. Being with my teammates and having that victory lap after a game is that moment you live for.”

The Panthers, who were 16–0 after Tuesday’s 2-0 home victory over No. 8 Norwich, are first in the NESCAC and ranked No. 1 in NCAA Division III. Mandigo said Leidt’s passion, energy and talent have helped ignite the team’s success.

Leidt is the team’s star player, serves as its center of gravity in the locker room and constantly raises the bar for her teammates. And as the Panthers chase their league-leading 11th NESCAC title, Leidt is indispensable.

“We go how she goes,” Mandigo said.

Raised in Connecticut, Leidt has hockey in her blood. Her dad, Bill, was a goaltender at Boston University and has served as the New England representative for U.S. Hockey. Leidt began playing hockey at the age of 3, and joined her first competitive team — the New Haven Warriors –– at age 5.

Leidt said soccer was her best sport, and her prep school coach encouraged her to consider playing goalie at the D-I college level. Leidt was close to exploring this route, but her affinity for hockey prevailed.

“I played literally everything when I was in elementary and middle school,” Leidt said. “I was very close to dropping hockey and playing Division I soccer. In my opinion, I was way better at soccer than I was at hockey. I loved it, but not as much as I loved hockey.”

Leidt also received D-I hockey interest, but believed the D-III path would offer more consistent playing time. She was right. In her first season at Middlebury, 2017–18, Leidt scored 15 goals, provided 12 assists, and was named the NESCAC Rookie of the Year.

She excelled on a line with All-Americans Maddie Winslow and senior Jessica Young, both of whom Leidt credits for her transition to the college game.

“They really did a lot for me when I was a freshman,” she said.

As a sophomore Leidt was named First-Team All-NESCAC, and she was the NESCAC Player of the Year in 2019–20. This winter, Leidt, a second-year captain, paces the NESCAC in points with 21.

What makes Leidt special as a player? For one, she reads the game with a tactician’s eye, always a step ahead of her opponents. Leidt can also shoot the puck: Over the past four seasons, no one has scored more goals (57) in the NESCAC. She acknowledges what she does well, and what she has done to improve.

“I see the ice really well. My IQ is pretty good and I’ve worked on my shot pretty hard for the last couple of years, and it’s paid off,” Leidt said.

Mandigo pointed out Leidt also blossoms in big moments, exemplified by her team-leading six game-winning goals this winter. Mandigo calls Leidt “as competitive as anyone who’s played here in my time.”

LOVE OF THE GAME

Perhaps the biggest driver of Leidt’s success is her passion for the sport. Leidt absolutely loves hockey, and she’s a huge Washington Capitals fan.

She constantly seeks out supplementary hockey training, and IPH Hockey, a program in Connecticut, has been integral to Leidt’s development. Leidt also referees youth hockey in Middlebury and coaches when she’s home.

“I genuinely have fun every day,” Leidt said. “I’m not putting a lot of pressure on myself.”

Her family shares that level of passion, too. When Leidt’s mom took a new job in Des Moines, Iowa, during the pandemic, she built it into her contract that, for one winter, she was going to be able to fly out to the East Coast every weekend to watch Madie play.

“Every single weekend my parents get on a plane and fly out here,” Leidt said. “They are the best.”

Leidt doesn’t see her hockey career sunsetting anytime soon. The forward is interested in playing hockey in Europe after she graduates in May.

It’s a route that top NESCAC players have taken before, including 2018 Middlebury graduate Janka Hlinka, who now plays for the Connecticut Whale in the Premier Federation. Sweden is the most common destination for ex-collegiate hockey players, as the country has robust professional and amateur leagues.

“She wouldn’t have any problems at all playing in Europe,” Mandigo said. “They’d be lucky to have her.” 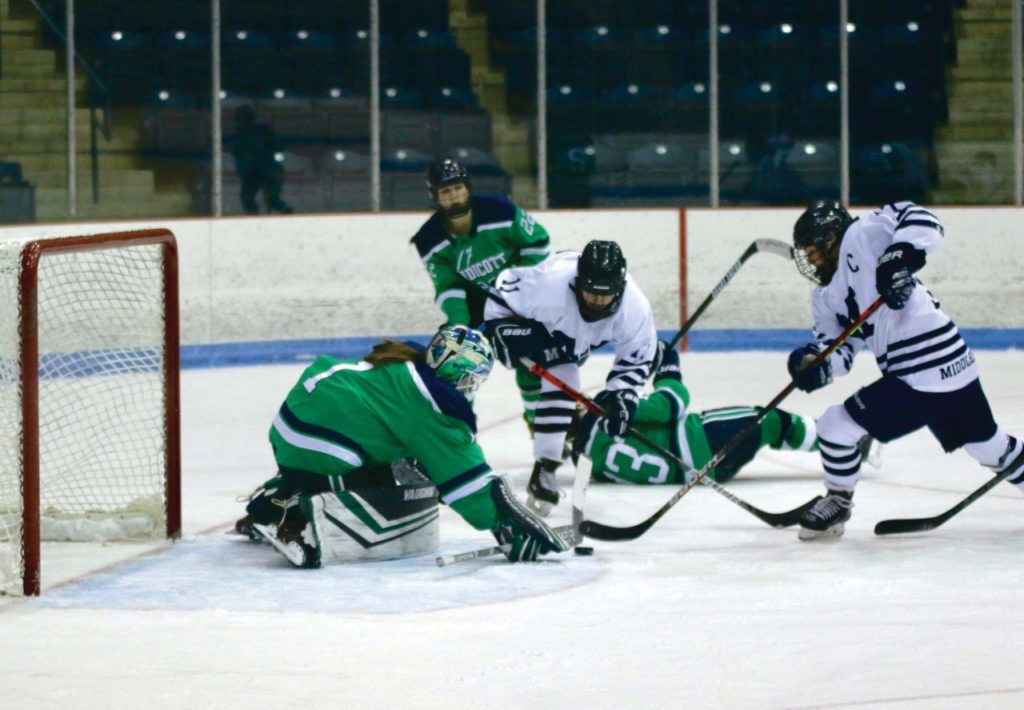 Middlebury College women’s hockey captain Madie Leidt, right, tries to stuff the puck past Endicott goalie Michaela O’Brien in a game last month. Leidt — a sparkplug for the Panthers — has scored more goals over the last four years — 57 — than anyone in NESCAC.
Independent file photo/Steve James

Whether Leidt decides to extend her playing career or not, her grit and character are certain to take her places.

Coaches and teammates are effusive in praising Leidt.

“I don’t think I have ever had a teammate that is as respected as Madie,” said Molly MacQueen, a freshman on the hockey team. “She consistently shows up for us in every way. Whether it’s scoring important goals, supporting people on the bench, or holding us accountable, it is always evident how much she cares about the team and the program.”

“You’ve coached 34 years, you’ve had a lot of players come through that you like. I really like Madie Leidt,” Mandigo said. “She’s a step ahead of other people.”

Leidt is an economics major who constantly works on business ideas. This January term, Leidt signed up for the MiddEntrepreneurs course, where she’s developed specialized hockey coaching gloves that can store markers, erasers, and whistles.

“It’s been a fun project that I’ve realized could be a side hustle to continue with,” Leidt said.

“I’m continually amazed with how well she does in the classroom,” Mandigo said. “She doesn’t want to be labeled as just a hockey player.”

While Leidt’s future looks bright, she’s currently laser-focused on the next couple of months. The Panthers have a sour taste in their mouth after losing the past two NESCAC championship games and are determined to capture the title this year. From there, the team aspires to make its mark in the NCAA tournament.

As the Panthers continue to charge toward their goals, you can count on Leidt to be at the center of it all.

“We have this saying in hockey ‘You play for the M (Middlebury), and Madie is that person to me,” said senior teammate Ellie Barney. “She’s the grounding force of our team.”