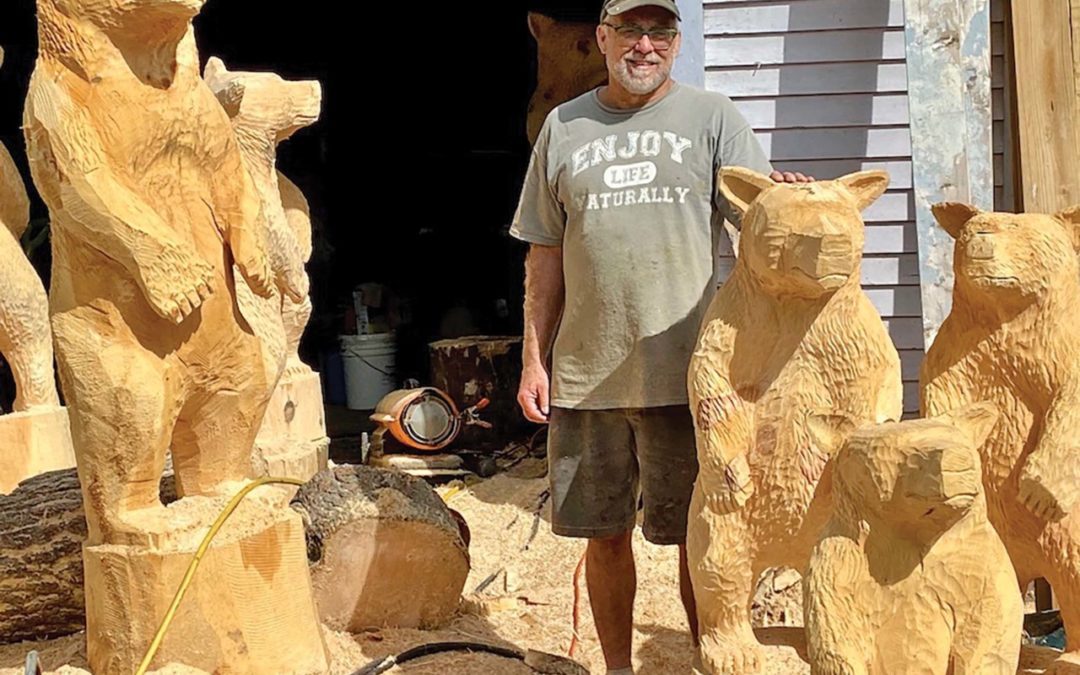 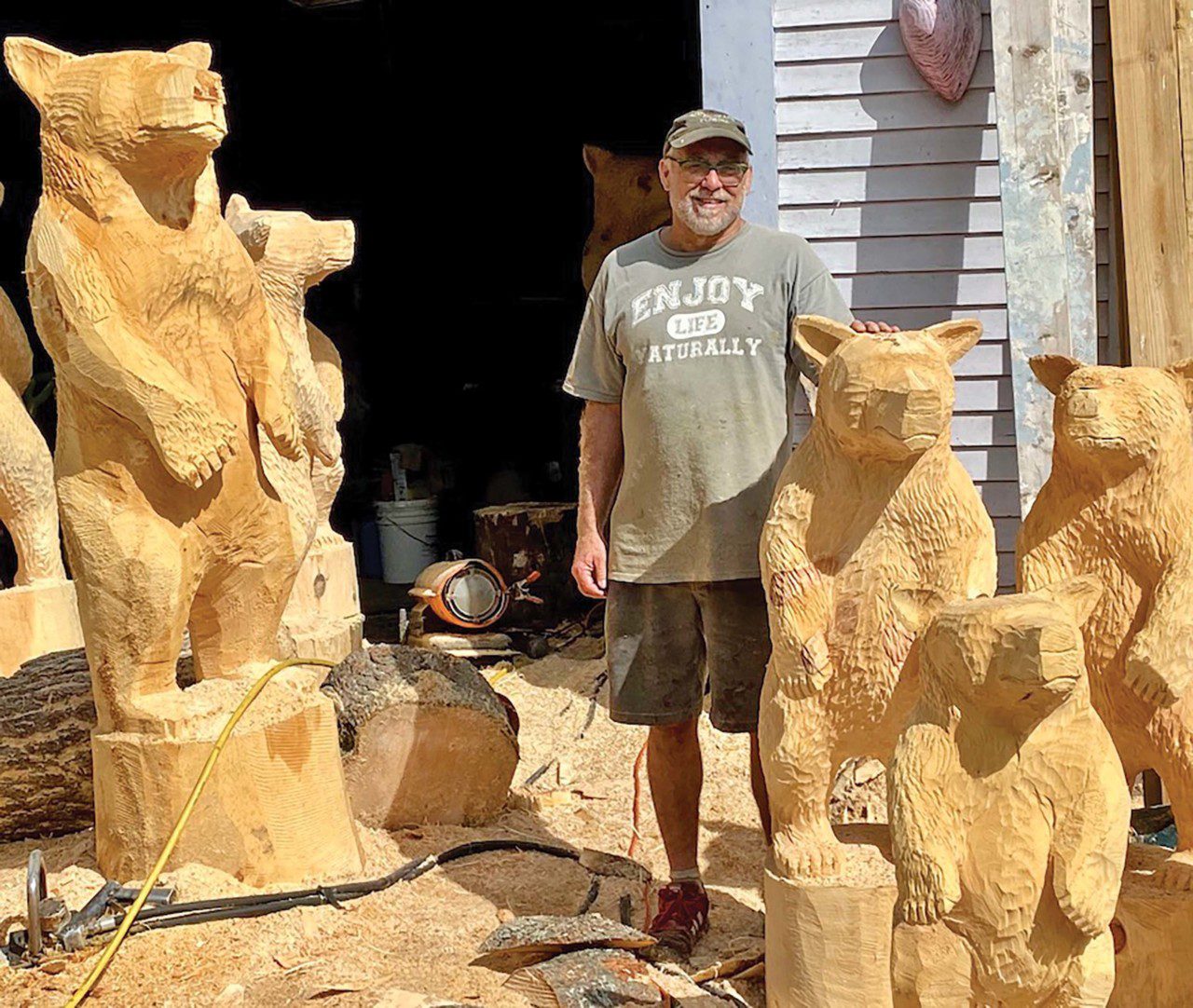 CHAINSAW CARVER AND wood sculptor Barre Pinkske stands amid his many bears at his workshop and gallery in Chester. He carves about 130 bears a year.
By Karl Lindholm

Over the last year or two, there have been a number of Cornwall Bear sightings reported on Front Porch Forum and elsewhere. I myself saw the Cornwall Bear. It crossed right in front of my car, galumphing along, paying no attention to me. I have seen three bears in my life, all from the car.

Brett, my wife, actually met the Cornwall Bear, up close and personal, on an early morning walk with the dogs. There it was, right in front of her, maybe 20-30 yards away. Our dogs are small, not too scary, but Paco is feisty (like the fyce in Faulkner’s story, “The Bear”), and he threw a fit, barking his head off.

He was loose but smart enough not to engage the bear. Brett made herself big, arms outstretched, and she yelled at the top of her voice — as she had read she was supposed to do (don’t run: bears are fast!) and the big fellow (or mama) shrugged and trundled off. She said he was “as big as a Volkswagen.”

Now I own the Cornwall Bear!

I have wanted a big bear, a chainsaw bear, for a long time, ever since I first saw the three bears years ago greeting folks from in front of the Sirloin Saloon, a restaurant on Shelburne Road in Burlington. Some people want fast cars and high adventure. Not me, I wanted a chainsaw bear.

Last May, that dream became reality. My dad’s cousin Winifred, the last of the Swedes, died in 2020 at 101. Quite to our surprise, she left my sister and me a modest sum of money. My accountant and budget manager, the aforementioned Brett, said I could have the money to spend as whimsically as I wished. 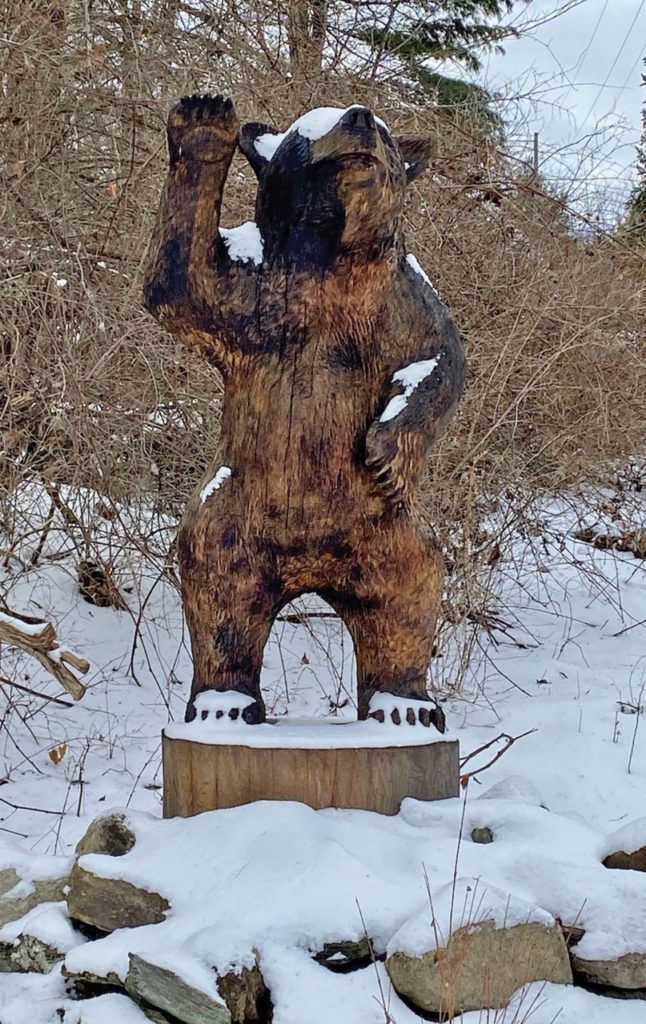 THE CORNWALL BEAR, a.k.a. Chainsaw Fred, stands near the woods at the entrance of the author’s driveway acting as both sentinel and greeter, watchbear and bear of glad tidings.”

I think his pronoun is “he” and his name is “Fred” (homage to Winifred) and he’s friendly, my bear. He stands at the end of my driveway, unobtrusively, about 20 feet from the road, waving at passersby. (We have a smaller indoor bear in our living room: his name is Art — full name: “Chainsaw Art”).

Fred’s chainsaw carver is Barre Pinske (BARE-ree, like the Vermont town). Like Woody Jackson and his Holsteins, Barre’s bears put food on his table. He reports that he makes about 130 a year and has created and sold over 4,000 chainsaw-carved wooden bears: “Hey, everyone needs their bread and butter,” he explains.

Originally a Minnesotan, Barre lived on Cape Cod for 16 years (owning three different galleries) and moved to Vermont in 2007. His workshop and gallery are on Route 103 in Chester. He creates more than bears. “From my start as a chainsaw carver,” he writes on his website, “my work has evolved to include many forms of sculpture, painting and funky furniture.”

I had the problem of getting my bear here to Cornwall from Chester. Barre suggested I grab a friend and bring my truck (my truck?) to his workshop where he would help load and secure it. Then, when I got home, my friend and I could jimmy the bear from the truck bed onto a front-end loader (a front-end loader?), being careful that it didn’t tip over (it weighs about 300 pounds).

“Or I can deliver it,” he said, “but I’ll have to charge you.” Winifred provided. So on a lovely day in May, Barre drove up with his truck with a winch on it and installed my bear.

I was going to put Fred up right in the front yard, out in the open, so best to greet folks passing on the road. Barre was skeptical of that location — better he not sit right on the grass so moist in the spring. He looked at the entry of our driveway where there was something of a natural pedestal where a rock wall once stood.

We put Fred there, right next to the brush and trees that front our yard. It looks like he’s emerging from the woods, his natural habitat — a subtle placement, not in your face. I am thrilled now every time I leave home and he bids me farewell, or I return home to his welcome. Paco, of course, barks his head off from the safety of the car every time.

For me, Fred connects the artist and the artisan — and expresses the universality of the creative impulse. I imagine the first lumberjack to look at a big old log and say, “I think I’ll take my chainsaw (or some other cutting device, based on the epoch) and make something out of that,” just as other sculptors, both rude and refined, take a lump of some substance or other and make striking, distinctive, often beautiful creations.

My bear connotes for me the hardy woodsman, the lumberjack, and the history of logging in the Northern woods, the act of felling trees, dragging logs to the river, floating them downriver for milling — that robust life that Howard Frank Mosher brought to the page in “Where the Rivers Flow North.” 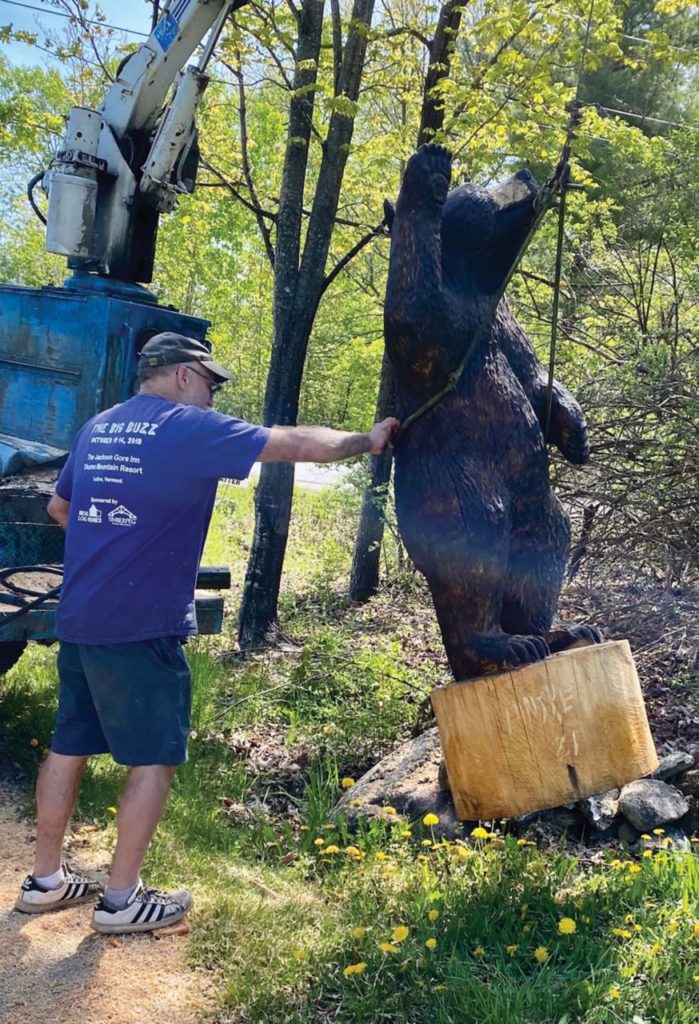 ARTIST BARRE PINSKE installs his wonderful wooden creation in Cornwall on a on a beautiful day last May.

Robert Frost, the Sage of Ripton, tells us “Whose woods these are I think I know” or “Two roads diverged in a yellow wood” or “One could do worse than be a swinger of birches.” The full title of Thoreau’s epic is “Walden, Or Life in the Woods.” The last line in Emerson’s poem, “America, My Country” is “Land of the forest.”

Wood is an elemental substance in our lives, organic, comes from the earth, the soil, as common as dirt. It is plentiful here. We build our homes of wood. Many of us heat our homes with wood. Fred connects me, a sedentary sort, to the natural world, to the woods, his home, the woods of Vermont, my home, and Maine, my childhood home. I live just three miles from town now, but I am nonetheless surrounded by woods. I can hear the coyotes rioting at night.

When I look inside my home, where I spend so much of my time, there is a lot of wood, and not just the furniture but the objets d’art, the trinkets, tokens, totems, talismans, and tchotchkes, the bric-a-brac of my life, the items that please me, my treasures.

I am the biggest fan of Weybridge Gary Starr, the bird carver, whose colorful ornaments from Vermont basswood festoon our house. His exquisite half-size loon, his signature piece, is my go-to gift for moments of great celebration and for people I love and admire most.

I’m grateful to Cousin Winifred for the gift in my life of Chainsaw Fred. He is both a sentinel and a greeter, a watchbear and a bear of glad tidings. Maybe he’s not waving at all, but signaling “Peace,” a worthy sentiment these days.

Karl Lindholm’s column “Sports (Mostly)” can be found every other week on the sports pages. Reach him at lindholm@middlebury.