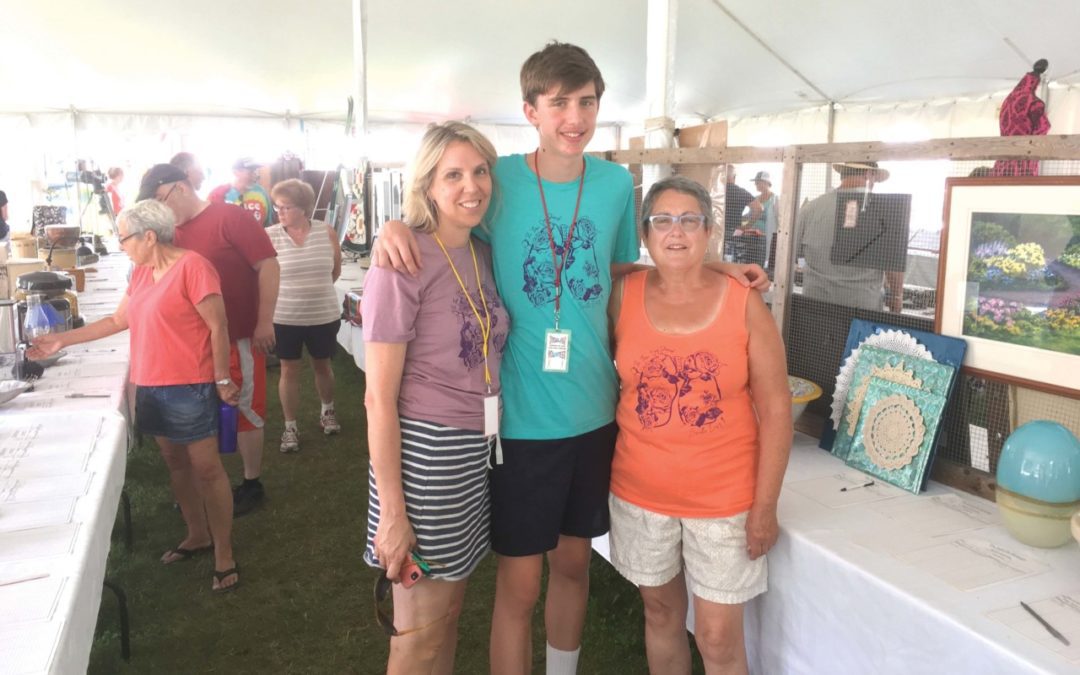 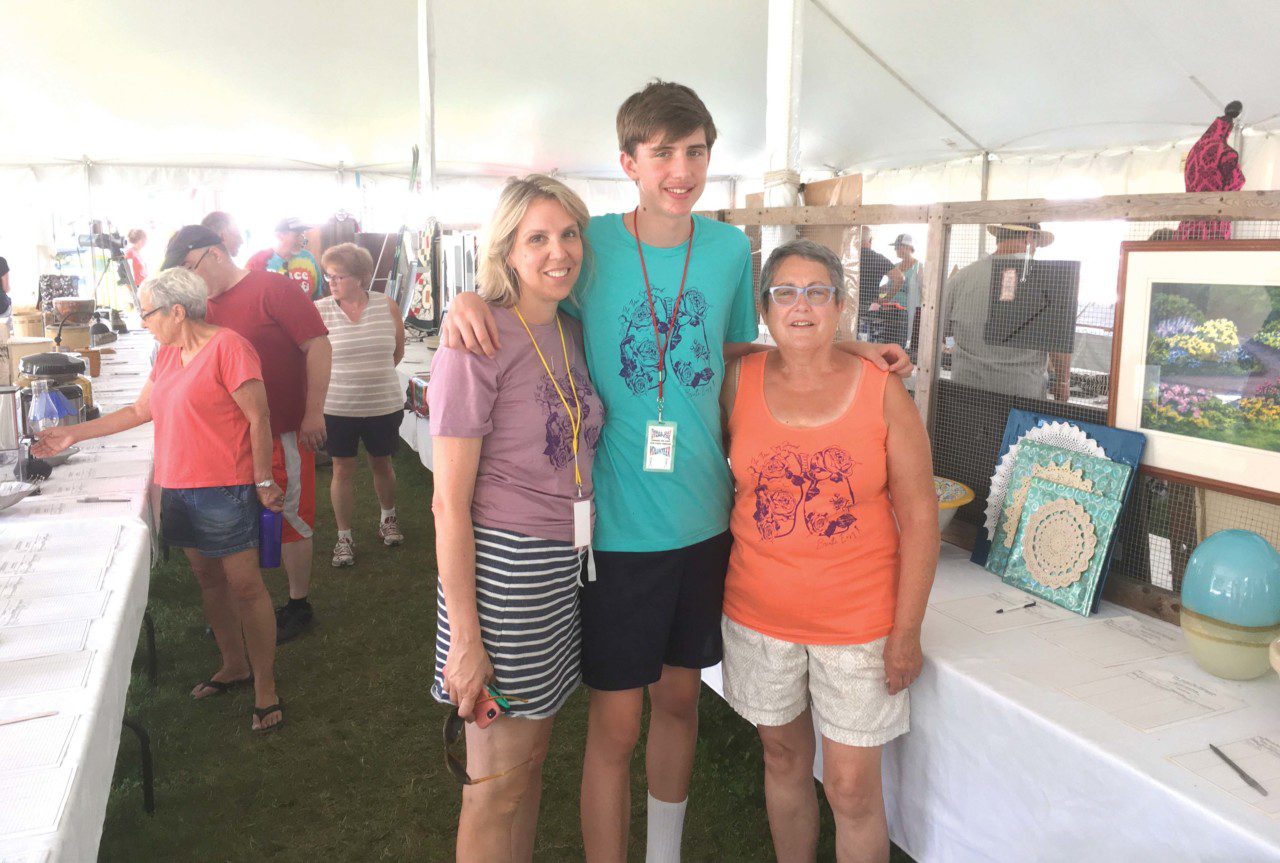 STAMPEDE FOUNDER AND co-organizer Bonita Bedard, right, stops for a photo with her daughter Sheri Bedard and grandson Gavin Bannister at the 2019 lawn sale. Due to changes wrought by the pandemic, climate change and aging, the Bedards have decided that there will no longer be a Stampede lawn sale, but other events will continue. Independent file photo/John S. McCright
By Christopher Ross

BRISTOL — Since its founding 30 years ago by Bonita and David Bedard, the Three Day Stampede Toward the Cure for Cystic Fibrosis has grown to become one of the largest grassroots fundraisers for the national Cystic Fibrosis Foundation.

The Bedards launched the Stampede after learning their infant granddaughter Kayla had cystic fibrosis, a life-threatening disease that affects the lungs and digestive system.

Over the years, with the help of the community, generous sponsors and a small army of volunteers, the Stampede has raised more than $2.2 million for the Cystic Fibrosis Foundation.

A high-profile component of the Stampede has been the annual three-day-long summer lawn sale — a bargain hunter’s dream, with tents and tables, boxes of books, piles of pants, towers of Tupperware and tons of toys, plus hot dogs and hamburgers and WOKO-radio broadcasting live onsite all day long.

Lately, however, the Bedards have begun to envision a different sort of fundraising future, one inspired by and centered around the passions and talents of their children, grandchildren and other loved ones.

And they have decided that, going forward, the annual lawn sale will not be part of that.

This was not an easy decision to make, Bonita Bedard told the Independent.

“I had a really hard time with it,” she said. “I’m just now getting to the point I can talk about it without getting all teary. Because it’s really about the people — our volunteers, the core people on the ground who’ve been with us for 30 years. It’s like a family.”

The 2020 and 2021 Stampede lawn sales were canceled because of the pandemic, and it wasn’t looking promising for this year either.

Liability insurance for the event has been covered by the Cystic Fibrosis Foundation in the past, but this year that insurance comes with a number of strict COVID-related protocols: six feet of social distancing at all times, no tents, and a vaccine-related legal waiver that must be signed by everyone involved, volunteers and customers alike.

The Stampede, like other similar events around the country, would not be able to make this work. 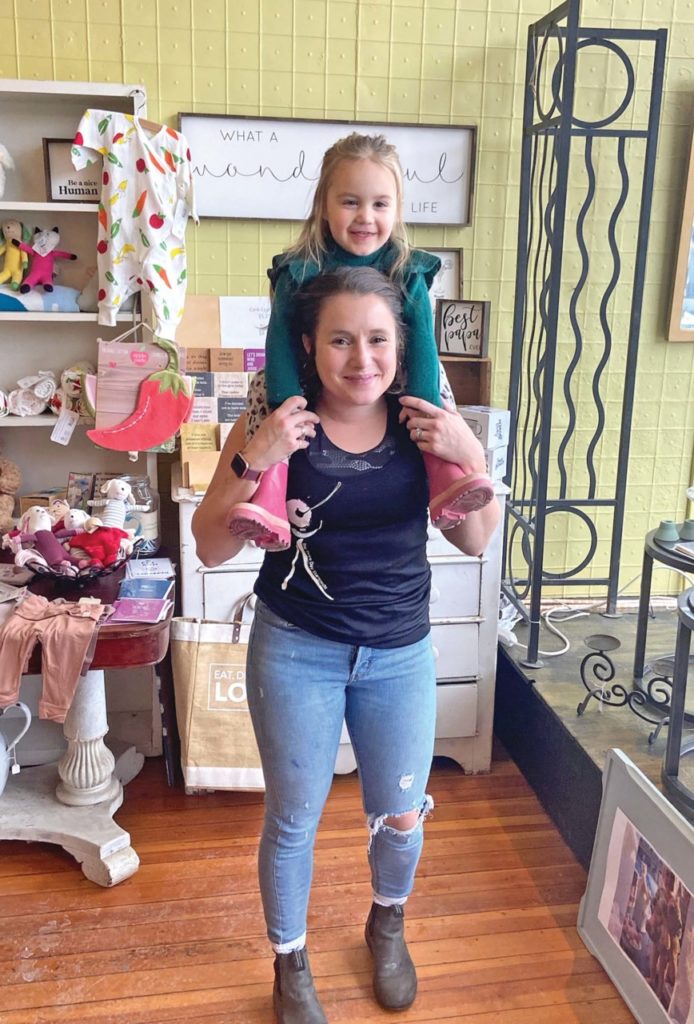 FOR KAYLA BESSETTE, 32, pictured here with her daughter Lily, saying goodbye to the annual lawn sale for the Bristol Stampede Toward the Cure for Cystic Fibrosis will be bittersweet. But Bessette is confident her family, which founded the nonprofit after Kayla was diagnosed as an infant with the disease, will come up with new events and programs to continue their fundraising.
Photo courtesy of Kayla Bessette

But that’s only the most recent challenge.

For years, the impacts of climate change have grown stronger, and the weather has been getting worse at the events, even downright dangerous.

“The weather has been a real nightmare for David and me,” Bedard said. “It has kept us up at night.”

When the wind picks up, the tents can be like kites, she said, and for the last five years of the lawn sale, they had to add additional stakes to keep them on the ground.

One year, while volunteers were setting up, several of the tents were blown down, Bedard said.

Sudden, fierce thunderstorms have become more common too, and it can be hard to clear everyone out from under those tents.

“Even just a rainstorm with strong winds can be dangerous,” Bedard said.

On top of that, the Stampede’s equipment is breaking down and “aging out,” she explained.

Some of their trailers are down on the axles now. The protective coating on their tents is flaking off.

“David and I also feel like we’re ‘aging out,’” Bedard said.

Rather than mourning the closure of the lawn sale, however, the Bedards see this as an opportunity to make changes that will allow the Stampede to succeed for the next 30 years.

They will continue to host the annual walk and the 5K run, and maybe the silent auction will move online for good.

Beyond that, the future of fundraising for the Cystic Fibrosis Foundation will be created by the next generations.

The Bedards’ daughter Shawna Sherwin and her family are avid hikers, so perhaps a hiking challenge.

Their granddaughter Kayla Bessette is into field hockey, so perhaps a field hockey tournament.

Or things other family and community members are passionate about — biking or motorcycling or volleyball.

“It’s exciting to think of young people coming up with new ideas and figuring out ways to take this into the future,” Bedard said. “But David and I aren’t going hiking with you,” she added with a laugh.

Last week, in a message to their volunteers, sponsors, shoppers and supporters — including the countless people who donated items year in and year out — the Bedards highlighted not only the time spent and the money donated but also the tangible impact the Stampede has had on cystic fibrosis research.

“All of you have been a huge part of the progress that has been made in the treatment for CF,” they wrote. “While there have been several new medicines that have improved the quality of life for so many with CF there is still a lot of work left to do so that every person with CF will be able to be part of these life saving advances.”

And they were grateful.

“We love the Stampede and all of the people who have become part of our Stampede family,” they wrote. “The week we have spent with each of them every July over these 30 years has been a true gift to each of us and means the world to us. The support of the community has been truly overwhelming and made the Stampede the incredible event it became.”

WOKO remains committed to being the Stampede’s media sponsor, and the Bedards hope their other longtime sponsors — and there are many of them — will be a part of this new era, they said.

“We’re going to bring forward all the things that were so special about the Stampede — and that’s the people,” Bedard told the Independent. “It may be smaller, it may mean raising a little less money, but we’ll be making it together. The core will be there. The love will be there. And with everyone coming together we can still do great things.”

For more information visit threedaystampede.org or follow the Stampede on social media.