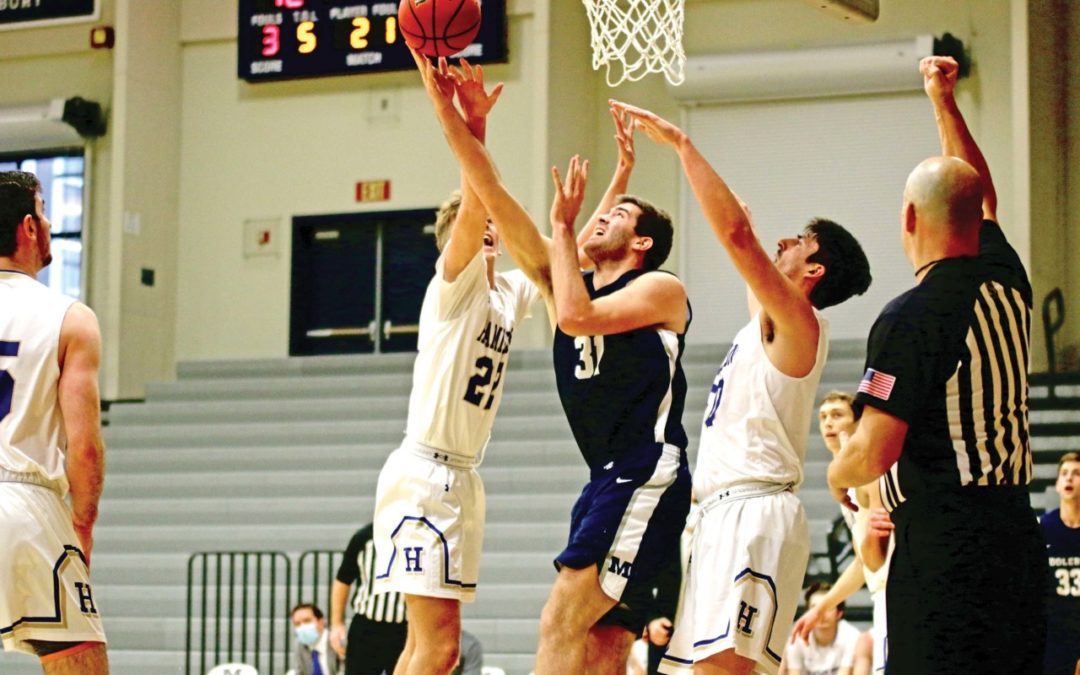 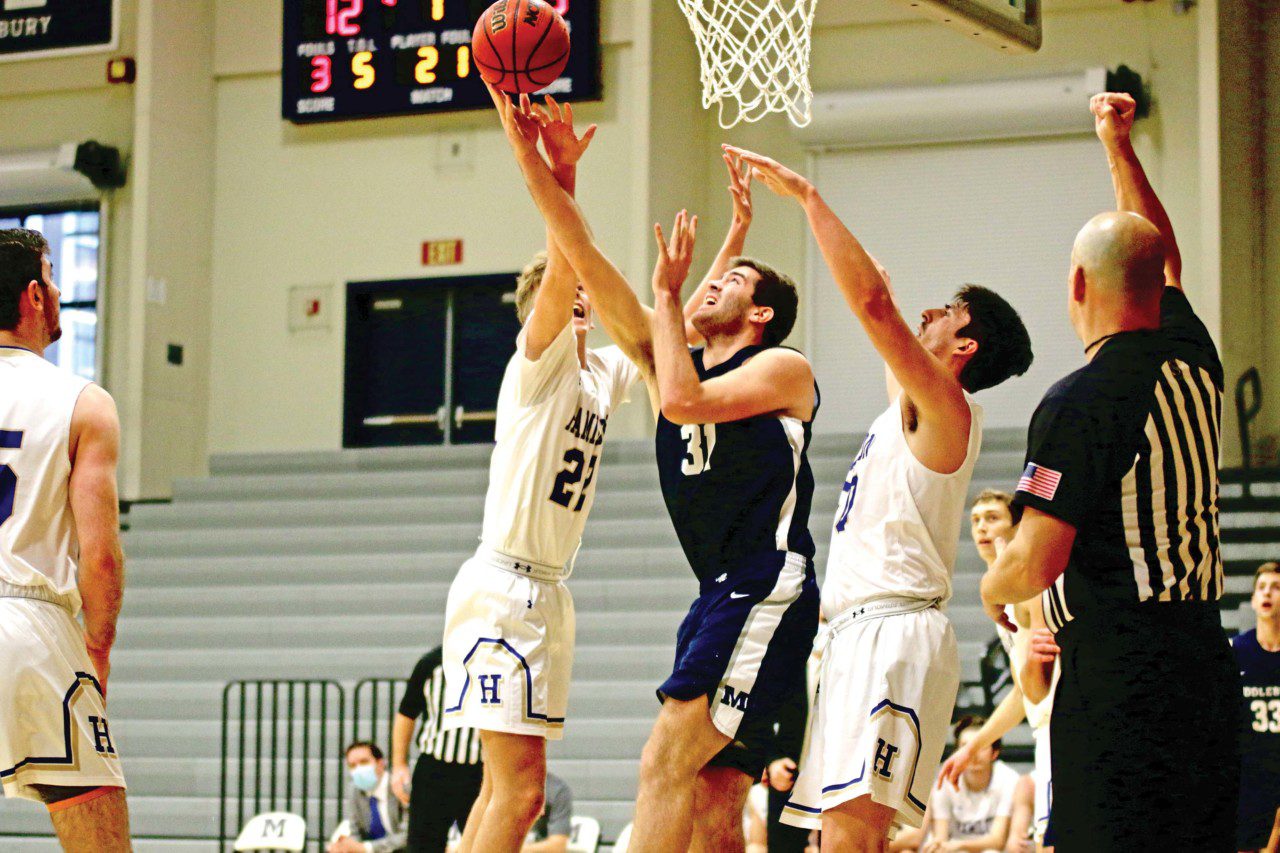 PANTHER MEN’S BASKETBALL forward Alex Sobel draws a foul in a recent victory over Hamilton. In his first year as a starter Sobel leads NESCAC in blocked shots and rebounds and is fourth in points per game. His teammates praise his enthusiasm. Independent photo/Steve James
By Blaise Siefer

MIDDLEBURY — When Alex Sobel walks into a basketball gym, he instantly commands attention.

The junior captain on the Middlebury College men’s basketball team is six-eight, 230 pounds and boasts a six-foot, 10-inch wingspan. He has enormous hands and can dunk — and palm a ball — like few in NCAA Division III basketball.

“The moment he walks into a gym, you know he’s a good player,” said Charley Moore, a sophomore on the team. “He’s just so much better physically than the majority of guys we play.”

This was supposed to be a rebuilding year for the Panthers, a rookie-laden team with limited collegiate experience. Of the upperclassmen on the team, Sobel was the only player to have started a college game before this season.

But the Panthers (14–2) are rewriting that narrative, riding a 12-game winning streak after defeating Plymouth State, 76-68, on Tuesday. The team has emerged as a top contender for the NESCAC title, alongside the likes of Williams and Tufts.

At the center of this hot streak is Alex Sobel, a do-it-all center who hasn’t missed a beat since opening day in mid-November. Not only has Sobel helped a young corps of players adjust to the quick rhythm of NESCAC basketball, but he’s also succeeded on a personal level, already earning three NESCAC Player of the Week awards.

Sobel currently leads the NESCAC in both blocked shots (3.4 per game) and rebounds (12.3), and ranks fourth in points per game (18.2). On Jan. 10, he was named the U.S. Basketball Writers Association National Player of the Week after leading the team to three straight wins, including a victory over Hamilton when he put up 28 points and a career-high 21 rebounds.

“I don’t recall any of our players ever getting over 20 rebounds in a game,” Coach Jeff Brown said. “The numbers that he’s been able to post have been really outstanding. He really does so much on the court — he makes the game easier for his teammates.”

The first word that Brown used to describe Sobel’s game was versatile: He’s strong on both ends of the court, capable of scoring and assisting in a variety of ways while using his rebounding and positional skills on defense. 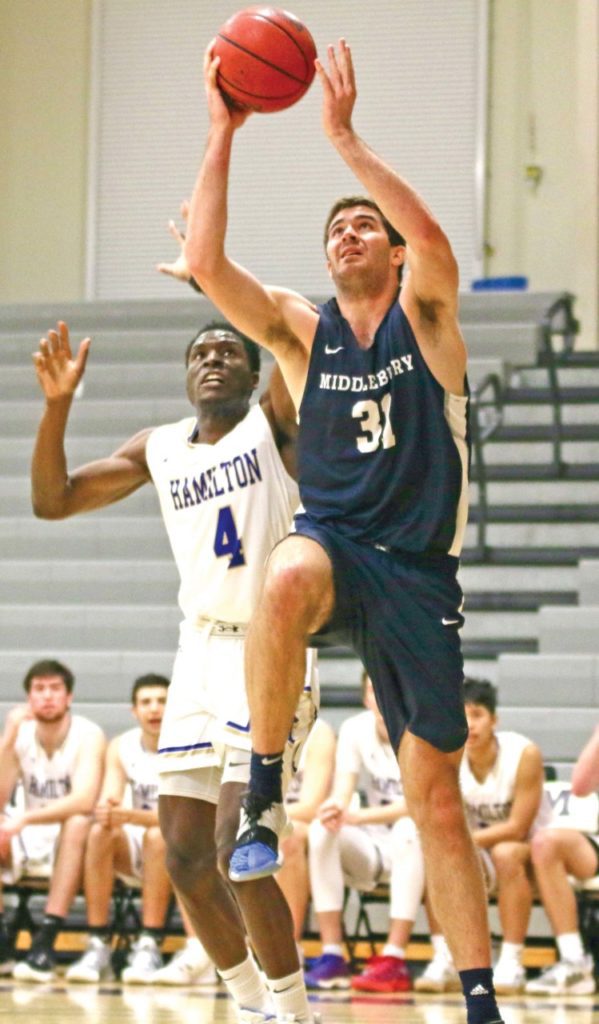 Watching him play, the first thing that is obvious is his physical dominance: He practically bullies his opponents, whether making his way to the rim or elevating for a rebound. He does “a lot of things that few D-III players can do,” said Moore.

“One of the best parts of my game is being able to jump high, but when I see Sobel, I know I can’t outjump him because his arms are so long,” said Moore, a 6-foot-4-inch guard. “When you go up, you rise, and he rises even higher.”

Then there’s Sobel’s blocking prowess. Few players in Division-III hoops can deny a shot like him. For perspective, in his rookie season at Middlebury, Sobel led the NESCAC in blocks despite averaging just 13.9 minutes off the bench. And this season, he’s tallied 54 blocks, 25 more than second place.

His success boils down to a mixture of length, timing, and awareness. When Sobel blocks a shot, it’s as if an older sibling is teasing a younger sibling — almost effortless.

Sobel has always played a role on the team at Middlebury, but the leap he’s made this season is clear. His usage rate has skyrocketed since the 2018-19 campaign — he averages 28.9 minutes this year, compared to 13.9 in 2018-19 — and now he’s shouldering the demands of being the team’s star player.

Sobel credits his improvement to the work he’s invested into his body, as he’s added a lot of muscle in the past couple of years. He’s also maturing as a leader, a true lead-by-example player who sets the tone in practice with his passion and competitiveness.

But despite all the accolades and success, Sobel is clear about one thing: His path hasn’t been linear. In 2020, he took a leave of absence from Middlebury for personal reasons, spending a year and a half away from school (he’s now a member of Middlebury’s Class of 2023.5, set to graduate in February of 2024). At times, he doubted if he’d ever return to Vermont.

“Middlebury has such a culture of perfection. A lot of people know exactly what they’re doing, (or) it feels like that at least,” Sobel said. “That’s not the case. It hasn’t been a perfect road that’s led to this moment –– which I think makes (my success) feel better.”

Sobel’s teammates say his resilience is inspiring, and that he is known for his humility and easy-going nature, someone who loves banter and frequently pokes fun at himself, too.

Moore described Sobel’s energy as infectious, helping to fuel the team’s strong camaraderie. When the team was on campus together before winter term began, they frequently hung out in a townhouse, playing poker, Fortnite, or whatever else they could think of.

“It’s a team where, from freshman to senior, every voice is heard,” Moore said.

Sobel and the Panthers play away at Williams this Saturday, but return home for back-to-back fixtures against Trinity and Connecticut College on Jan. 28 and 29, respectively.

Propelled by Sobel’s production and strong team chemistry, the Panthers find themselves in a position to contend for hardware. The NESCAC title is the first goal, of course, followed by success in the NCAA tournament.

“We have enough on offense and we defend really hard. We can be in every game,” Sobel said. “There’s no reason we can’t host a NESCAC tournament and win it.”