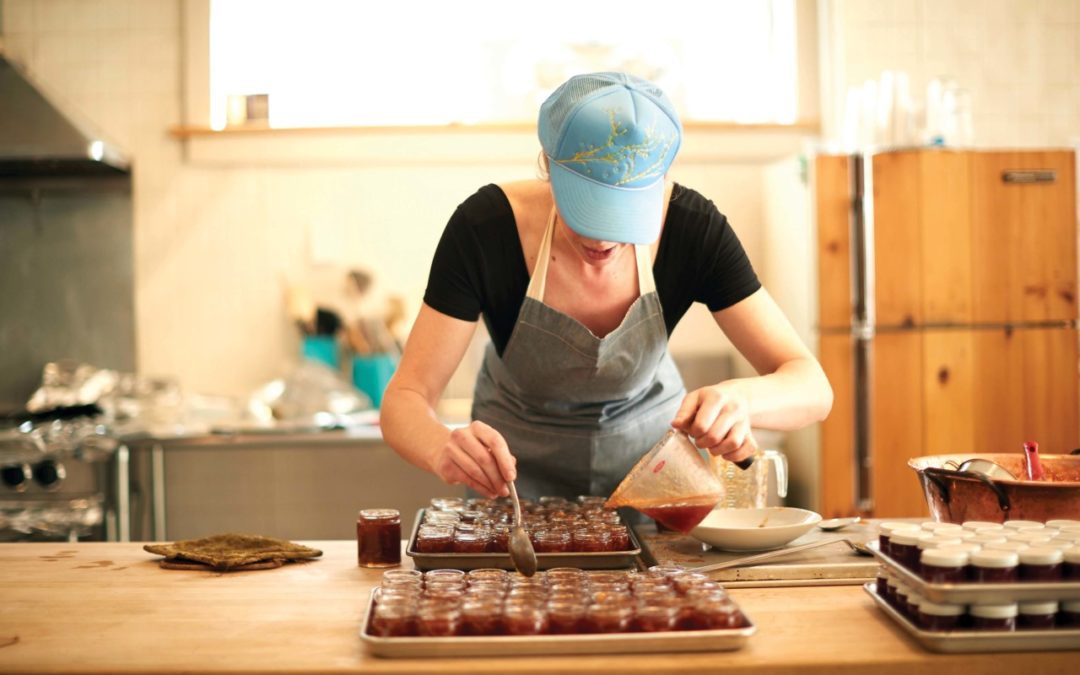 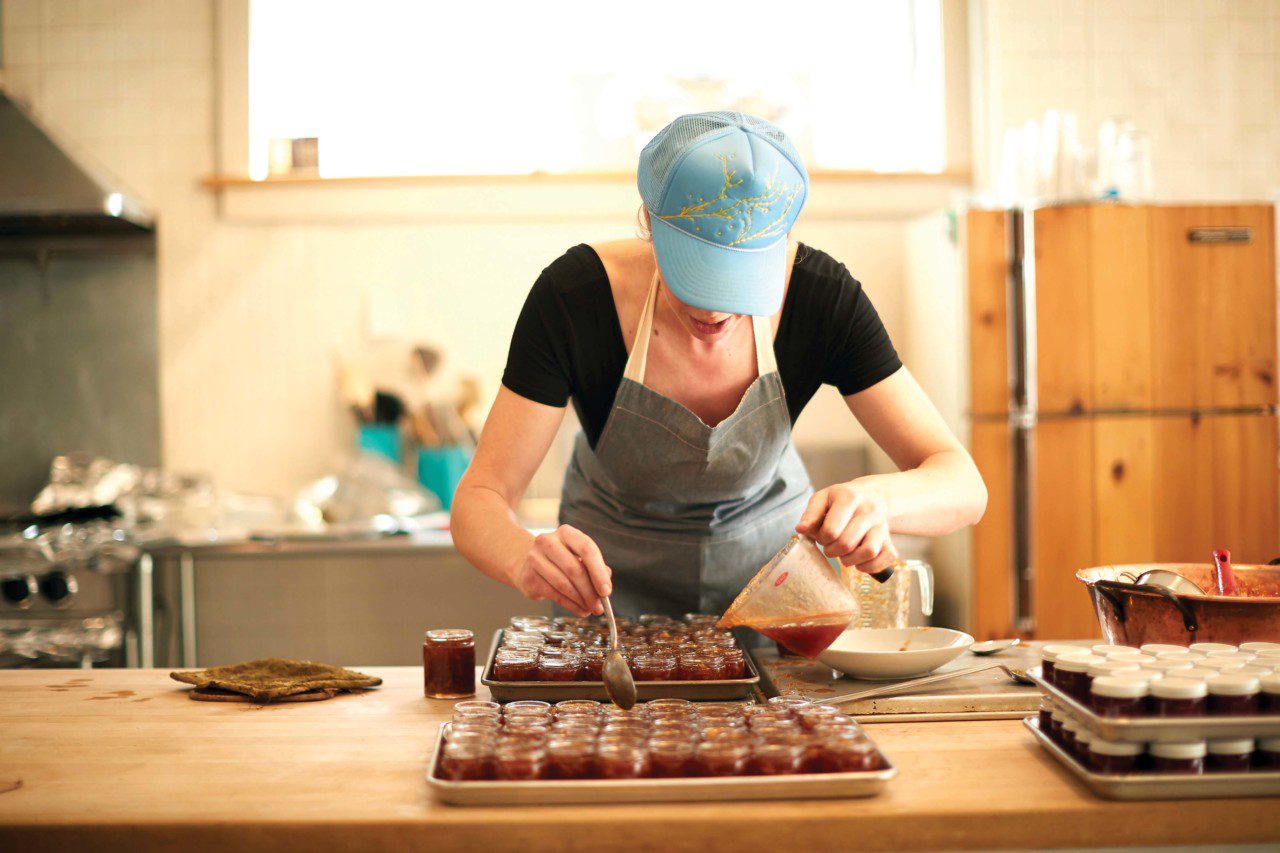 V SMILEY, WHO’S been cooking and packaging her award-winning V Smiley Preserves in Bristol for six years, purchased the Bristol Cliffs Cafe last month and plans to reopen it in February as Minifactory. It will carry on the bakery’s 45-year legacy at 16 Main St. but will also serve as a jam manufactory. Photo courtesy of V Smiley
By Christopher Ross

“Much of the remodel ... is about making our kitchen work more visible to the public and opening up the space for running a small market.”
— V Smiley

BRISTOL — The Main Street eatery until recently known as Bristol Cliffs Cafe will reopen next month as Minifactory, if all goes well. Though the business has changed hands and will emerge as something new, it’s not unlikely people will keep referring to it as “the bakery.”

“I know I certainly do,” new owner V Smiley told the Independent in an email.

Smiley, who grew up on a New Haven farm then lived for a time on the west coast working in various kitchens, founded V Smiley Preserves in 2012. In 2015 she moved back to Vermont, rebuilt her business from scratch and for the past six years has been cooking her award-winning jams in the kitchen at another downtown Bristol location — Tandem.

She plans to revamp the 16 Main Street space to include not only a coffeeshop and eatery but also operations for V Smiley Preserves.

Bristol Cliffs Cafe was the latest iteration of a business that has occupied 16 Main St. for the past 45 years.

Its most recent owner, Celina Ellison, bought and renamed the bakery in 2018, after managing it for eight years.

“Bristol Bakery sticky buns, apple turnovers and bagels were a steady part of my childhood diet,” Smiley wrote in a message that was printed and posted in the coffeeshop just before it was closed for renovations on Dec. 14. “Since moving back home … I have slowly built V Smiley Preserves with the idea that we could one day open a brick and mortar where we produced V Smiley Preserves and serve breakfast with endless cups of coffee.”

In an accompanying message Ellison thanked her loyal customers and friends.

“You have made the time so rewarding for me by sharing a bit of yourself every day one way or another,” Ellison wrote. “I have enjoyed the conversations over the counter more than you may know.”

The Independent was unable to connect with Ellison before Bristol Cliffs closed.

Smiley has undertaken a “light remodel of the space” and is working to hire new staff. Her initial focus has been on getting the jam manufactory online.

“Much of the remodel … is about making our kitchen work more visible to the public and opening up the space for running a small market, which will be at its peak during summer when we can retail the fresh, local fruit we already purchase for VSP (V Smiley Preserves) plus veggies from local farms and a tidy selection of cheese, as preserves and cheese are a big part of our sales at V Smiley Preserves.”

After all the “front of house” work is complete, Minifactory will open to the public.

When it does, Smiley’s first priority will be to bring “the beloved aspects of the bakery back online,” including coffee, pastries and “food items you can eat on your way to school and work,” she said. “At the same time, we’ll be filling out our small marketplace with local meat, veggies, citrus, cheese, coffee beans and tea along with bread from Downhill Bread.”

Regarding the menu, “we want to bake and cook to feed as wide a range of diets as possible — from ham & egg biscuit sandwiches to mountainous salads to roasted parmesan and pistachio-dusted leeks to our yogurt with almond citrus tea cake — (plus) a pastry case that includes items made with alternative sweeteners and flours.” 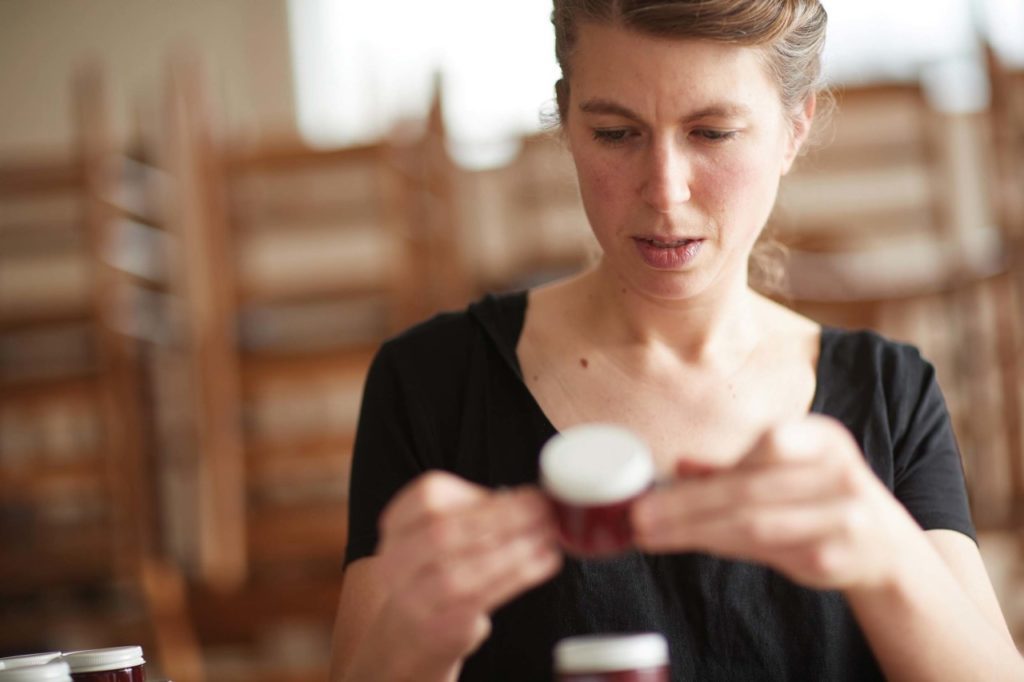 V SMILEY ATTACHES a label to a jar of V Smiley Preserves. The award-winning jam maker, who sweetens her products with honey instead of sugar, will move her cooking operation to the spot formerly occupied by Bristol Cliffs Cafe.
Photo courtesy of V Smiley

One alternative sweetener — honey — is a key ingredient in the preserves developed by Smiley, who for health reasons stopped eating sugar in her twenties.

“The first two evening projects (will be) an ongoing Sunday Afternoon Community Supper — fixed price and simple, filling, one-pot-meals — and Monday Night Veg Sesh, which is our play on Meatless Mondays and especially geared toward folks headed home after a long day who want to pick up an easy and veggie-filled meal,” Smiley explained. “When summer arrives, we’ll add Friday and Saturday evening dining.”

As the Independent reported last summer, Smiley had originally planned to move V Smiley Preserves to the Kennedy Brothers building in Vergennes and had raised more than $30,000 through KickStarter for the project.

But “rising costs pushed back fundraising, which meant we lost our place in line for construction, which meant we had to walk away from a space no one could afford to let stay unused,” she explained in a Dec. 15 Instagram post.

It was “heartbreaking,” she added, but also a useful learning experience.

Then she learned Bristol Cliffs was for sale.

“I was only able to contemplate purchasing the bakery because of working on Vergennes Minifactory,” she continued in her Instagram post. “I mean this on a psychological level but it’s true in a material sense too. The Kickstarter funds combined with a financial chunk that remained on the table after Vergennes fell through made it possible to purchase the bakery.”

The bakery is quite a bit smaller than the Kennedy Brothers space would have been — roughly 2,000 square feet compared with 3,400, Smiley told the Independent.

On the other hand, “we were also going to be a 100% startup business in the Vergennes location, which presented challenges from a financing and marketing perspective. In Bristol, we have the privilege of stepping into an established business.”

So instead of combining everything into one location, as it would have in Vergennes, V Smiley Preserves will continue making its jams on Bristol’s Main Street and storing them in a warehouse just up the road in Rockydale.

And soon, Bristol’s village bakery will start a new chapter in its decades-long history.

“To me the bakery is community, a living room, a cup of coffee, a quick snack, a longer meal, people watching, bumping into one another,” Smiley wrote on Instagram. “That’s what I always wanted for Minifactory (and the new) home for V Smiley Preserves — a place to call my own and cook for you.”