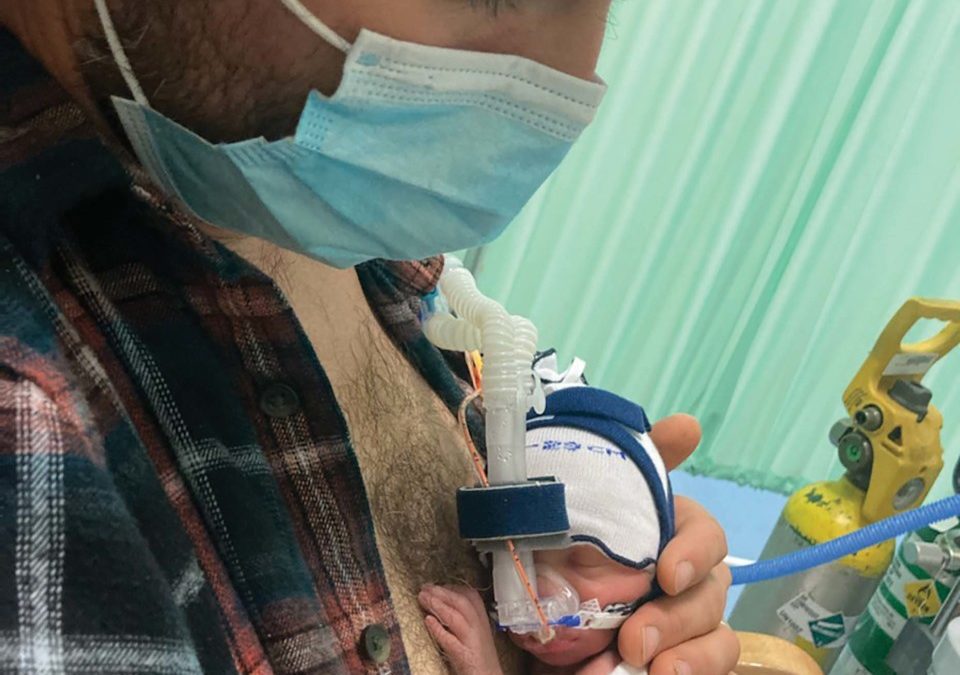 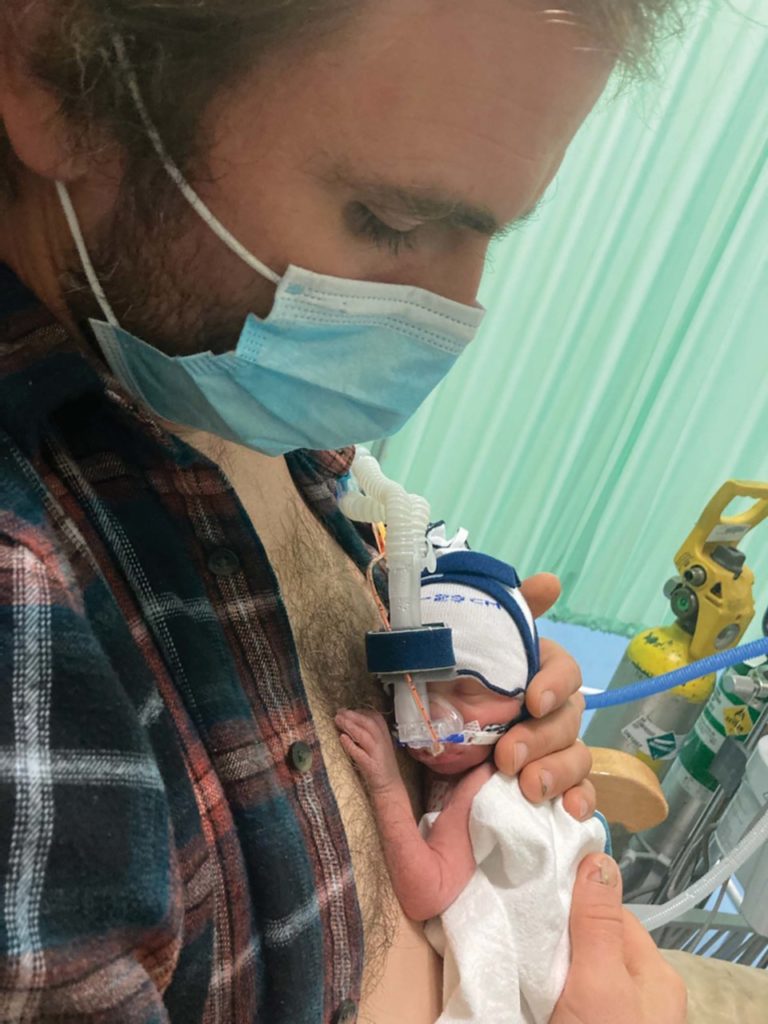 STEPHEN PARK OF Monkton cradles his baby, Adrian, who was born two months premature via emergency C-section after Parks and his wife, Sarah, were involved in a traffic crash in Tennessee.
Photo courtesy of Elizabeth Hoverson

MONKTON — Farmers, neighbors and other community members are rallying around a Monkton couple involved in a vehicle crash in Tennessee earlier this month, which resulted in the premature birth of their child.

Sarah and Stephen Park of Full Belly Farm had been visiting family in Adams, Tenn., when the truck they were riding in, in nearby Clarksville, was struck head-on by a vehicle that had veered into their lane, according to Stephen Park’s sister Elizabeth Hoverson.

The collision resulted in only minor injuries for everyone involved, but Sarah Park, who was seven months pregnant, had to be rushed to the hospital for an emergency C-section.

Adrian Park, who arrived about 10 weeks early, weighed 3 lbs. 6 oz. at birth. Unable to eat on his own or breathe without assistance, Adrian was transferred to Vanderbilt University Medical Center in Nashville, where he remains in the Neonatal Intensive Care Unit (NICU) — growing stronger every day.

“I am once again happy to report that everyone in this new family is doing wonderfully,” Hoverson wrote in a Dec. 19 update to the GoFundMe campaign she launched after Adrian was born. “Sarah is feeling better than expected, and Stephen and Sarah both are spending every moment they can at the NICU caring for Adrian. The staff at Vanderbilt have been amazing to the whole family.”

The prognosis for Adrian continues to be positive, Hoverson noted.

“He is now able to handle more of Sarah’s milk, which has resulted in dirty diapers,” she wrote. “Never knew so many people would be excited over a few dirty diapers.”

Sarah Park was discharged from the hospital after she gave birth, but the couple expects Adrian will need to stay there for at least six weeks — maybe more, Stephen Park said during a phone interview with the Independent on Monday.

During that time, the Parks are staying in Nashville to be close to the baby.

Hoverson launched a GoFundMe campaign on Dec. 13 to help with the Parks’ medical bills and their extended stay in Tennessee, which will prevent them from fully preparing for the next growing season at Full Belly Farm.

The campaign has been met with an outpouring of community support.

“The support has been amazing,” Park said. “We’ve been blown away by it.” 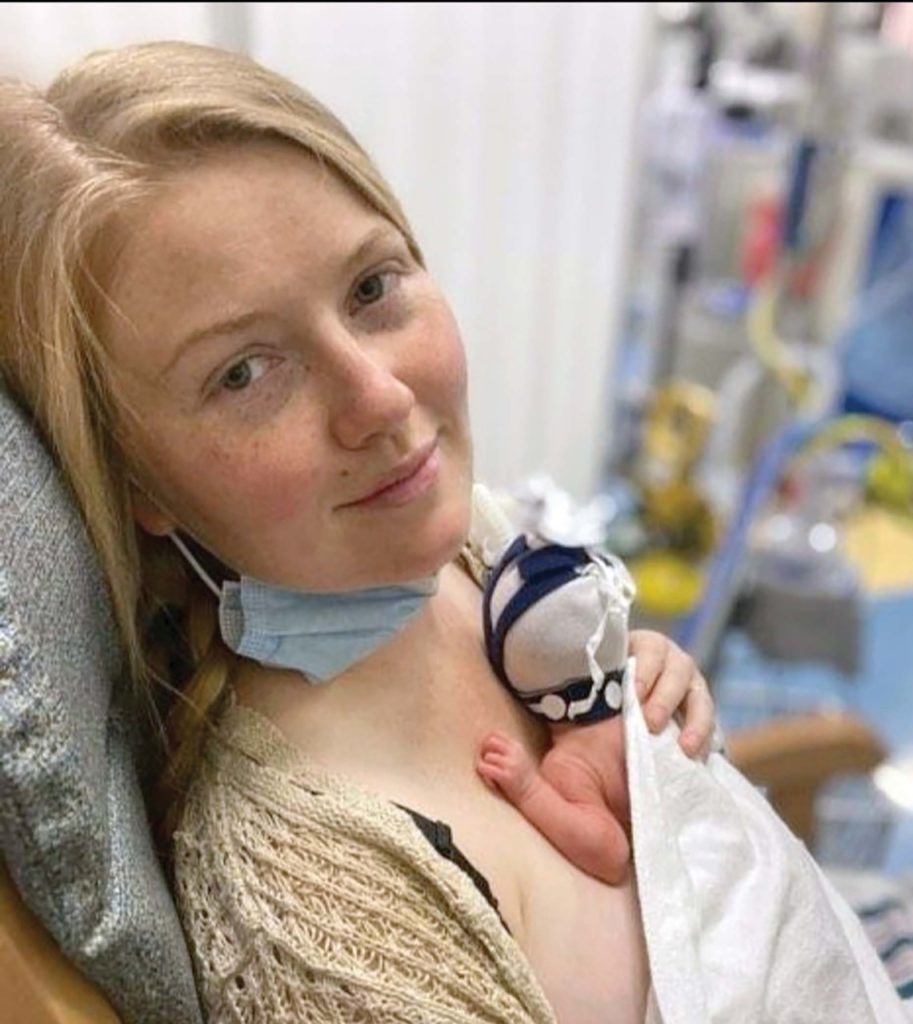 SARAH PARK OF Monkton rests with her baby, Adrian, who was born two months premature via emergency C-section after Parks and her husband, Stephen, were involved in a traffic crash in Tennessee.

Many not only donated money but also offered to help the Parks get back on their feet.

“Let us know if we can help farm-wise in the next few months,” wrote Eugenie Doyle of Last Resort Farm on the GoFundMe page.

Full Belly Farm has also received offers of labor from folks in the local community — including people the Parks didn’t know.

The Parks anticipate some of the GoFundMe proceeds will go toward medical and other bills incurred during their time in Tennessee.

“It will take a while to figure out the insurance piece,” Park said. “We’re probably looking at dealing with that over the next year.”

And some financial support will likely be used to help the Parks cut back on some tasks that might otherwise have gotten done in early summer.

The Parks purchased their farm, which used to be known as the Norris Berry Farm, in 2018. Full Belly Farm grows pick-your-own berries, produce, flowers and other plants, and operate a seasonal farm stand in Monkton.

Though this is the slow season for the Parks right now, being away from the farm for the next six-plus weeks will be hard, Stephen Park explained.

“We’ll have to hit the ground running when we get back,” he said. “We do a lot of plants in the spring — flowers and bedding plants — so we’ll need to get the greenhouses up and running.”

The Parks had also hoped to take care of a number of repairs and other maintenance issues over the winter, before the baby was born in February or so, but much of that is now up in the air.

“We have a friend working part-time on the farm right now, so that will help, but instead of having a relaxing winter, we’ll be coming off the most stressful thing we’ve ever had to deal with — and then hitting the busy season.”

But for now, the Parks are focused on their baby. 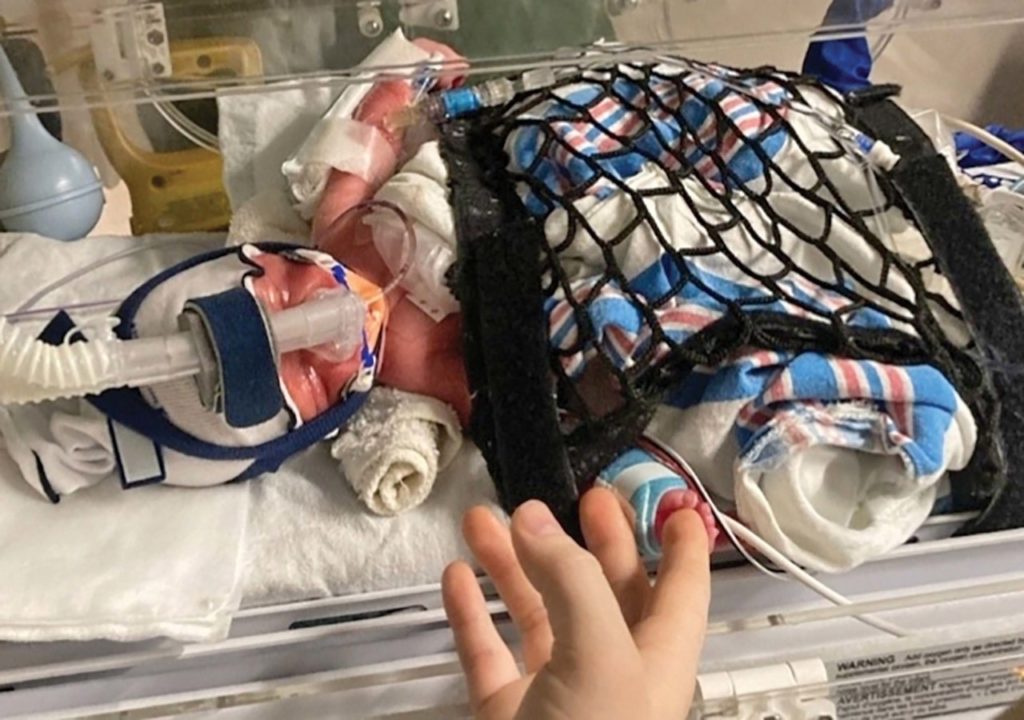 BORN 10 WEEKS premature after his mother was involved in a car crash in Tennessee early this month, little Adrian Park is gaining weight but will still need to stay in the hospital for at least another month and a half.
Photo courtesy of Elizabeth Hoverson

“Adrian is doing really well,” Park said. “He’s growing, and all signs seem to be that he’s going to come out of the hospital happy and healthy.”

Park emphasized again how “blown away” his family has been by the outpouring of community support, and he noted folks in Tennessee have been mightily impressed with the way Vermonters have come to the family’s aid.

“They say, ‘Wow, you must have a lot of friends and supporters up there,’” Park said. Then he paused for a moment. “I guess we do.”