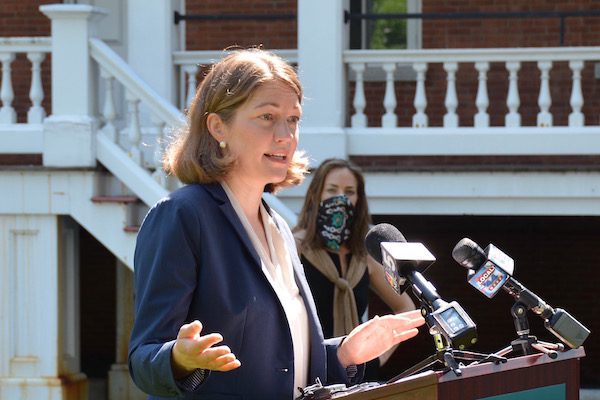 A lifelong Vermonter, Gray, 37, was born and raised in South Newbury, Vt., on a vegetable and dairy farm still operated by her family today. She has served Vermont in Washington as an aide to Congressman Welch, statewide as an assistant attorney general and now as lieutenant governor. Before entering public office, Gray spent her career advocating for human rights and humanitarian assistance in Vermont, Washington and around the globe.

“While serving as lieutenant governor, I’ve met with hundreds of Vermonters and I know firsthand the challenges we face,” Gray said in her morning kick-off announcement. “Our workforce is shrinking, housing is unaffordable, families are forced to choose between caring for loved ones and paying the bills, and our next generation is struggling to make it work. From affordable, quality childcare to workforce development, I’m committed to working hard to bring real solutions to Vermont families. As Vermont’s Congresswoman I’ll fight for every corner of Vermont.”

Gray is the first candidate to announce her campaign for the open seat currently held by Welch, who announced on Nov. 15 his run for the U.S. Senate to replace Sen. Patrick Leahy, who will not seek reelection.

In a Zoom interview with the Addison Independent late Monday afternoon, Gray expounded on her desire to serve as Vermont’s representative in Congress, and of the experience she gained helping Rep. Welch get elected to Congress and serving on his staff in D.C.

“I think the bigger question, as we end one chapter and begin another, is filling the huge hole left by Sen. Leahy. For all these years, he’s been leading the country with Vermont’s values; he’s been Vermont’s North Star… but also the North Star for the country….

“So as Vermont’s lieutenant governor I have a choice, I can step back and stay where I am… or step forward and bring my skills, bring my experience, bring my understanding of state government — and also my experience as a lifelong Vermonter who has deep roots in the state and a deep understanding of the needs of our communities — to this campaign. We need someone right now who is not only committed to fighting for Vermont’s needs, but also someone to continue to fight for our values — which our state needs, and our country needs.”

She defined those values as being embodied by “integrity and hard work, unity, putting problem-solving ahead of politics.” As a congresswoman, if elected, she said, she would put “the needs of Vermonters in the forefront… and the values around preserving democracy above all else.”

Gray recalled that she was sworn in as lieutenant governor the day after the Jan. 6, 2021, insurrection at the nation’s capital, and reflected on the impact that had on her.

“When we see our democracy under attack — and we’re seeing it still with efforts to erode voting rights, access to reproductive rights — we must understand we’re in a moment where we really have to think long and hard about who’s representing us and how are they doing it… As a human rights lawyer, as an assistant attorney general, and now as lieutenant governor, I have lived Vermont’s values in my work every day, and I would bring those values to Washington as Vermont’s congresswoman.”

What stirs Gray to action, she said, is trying to solve some of the state’s deep-seated problems.

“I’m running because Vermonters don’t have access to affordable housing, a quarter of the state still can’t get online, we have a generation that is trying to find childcare with a system that is not well funded and not functioning, and we still don’t have paid family and medical leave… And we’ve tried at the state to put forward solutions to these challenges, but the challenges Vermont faces will not be solved by Vermont alone,” she said, adding that the problems were nationwide, and especially critical in rural areas across the country.

“Fighting for the needs of Vermonters, the needs of our communities, especially our rural communities, is what gets me out of bed every day. (That’s what) gives me the motivation to run, and that’s what I’ll be focused on as Vermont’s congresswoman, if elected. Which brings me to the actual work of the job, which is getting on the committees of jurisdiction, trying to be a strong voice for our small rural state, and sticking up for Vermont… Continuing to work with our congressional delegation, and recognizing how important it is that we all work on Team Vermont every day for Vermonters.”

Asked what her initial priorities would be, Gray said the three most pressing issues she would hope to tackle were affordable and effective childcare, workforce training and education, and paid family and medical leave.

“We’ve had more women leave the workplace in Vermont than a lot of other states by percentage,” Gray said. “We’ve seen that in the number of unemployment claims filed. We have a lot of unpaid caregivers who are women. If we’re going to address the economic wellbeing of women, we have to make sure we have national plans that support building a childcare workforce, and access to childcare for working families.”

Hopefully, the nation will pass President Biden’s Build Back Better plan, she said, but if it doesn’t “we’ll have to work on a long-term policy on childcare and for family and medical leave….We simply do not have the human services workforce right now to meet the mental health needs, the health care needs, the basic elder-care giving needs that we have in the state… I’ve discussed with Sen. Sanders this workforce crisis and as Vermont’s congresswoman, if elected, I would work with him to make sure we are investing in our state colleges, that our vocational and technical schools have the resources they need to increase access to those jobs and training opportunities… What we know is that takes federal support, not just here in Vermont, but across rural America.”

Gray noted that throughout the past year, she has met other statewide leaders trying to find solutions to today’s unique challenges.

“This is a generation struggling to make it work,” Gray said. “It’s a generation that has student loans debt, that can’t afford rent and certainly can’t afford to buy a home or get a mortgage, can’t afford childcare or even to have kids. We have a generation in crisis and Vermont is not alone in that struggle… I’m proud to have built partnerships with mayors, legislators and lieutenant governors across the nation who are dealing with these problems, and I’m encouraged to say it’s a generation committed to the future of this country, the future of our states, but also the future of rural communities and making sure that we’re meeting basic human needs coming out of this pandemic and looking at long-term solutions.”

Gray said what she has learned as lieutenant governor is that Vermont has the ability to lead the nation on specific issues and in unique ways.

“I think that our actions on voting rights, reproductive rights and on climate action can be a model for the nation,” she said, then added a broaden scope to the state’s leadership.

“As a state we’ve historically always been able to work across the aisle, to come together as independents, progressives, as Democrats and to welcome Republicans into conversations on statewide issues. I think our leadership on how to work together, working collaboratively, can really be a model for the nation and I think that’s part of my leadership style, as well, and what I’ll continue to do if elected.”

Gray defined her leadership style as being “collaborative, inclusive, listening, putting peoples needs before politics, being a Vermonter first, having compassion and humility… As a state, whether with Sen. Aiken or Sen. Leahy, we have been the conscience of the nation at different points in our history. We’ve stood up for human rights, civil rights… now we are standing up for voting rights, reproductive rights… That voice matters in Washington; people look to Vermont for good decision-making, good judgment. I’m proud of that legacy and I want to be part of maintaining it for our state.”

Reflecting on the fragility of the nation’s democracy in the face of the insurrection at the nation’s capital last January, and being challenged by a constant wave of misinformation from partisan sources, she says it’s time to give Vermonters, and all Americans, a keener sense of belonging.

“We need to get people off the sidelines,” Gray said. “This campaign is a campaign for the future of Vermont in this generational moment. We have some pretty big decisions to make about where we want to go, about what we want our leadership to fight for. I’m excited for that, but I really want Vermonters to feel excited too, and to feel part of the process… We need that sense of ‘we the people.’ This democracy belongs to all of us. We need to cherish it. We need to participate in it. So I’ll run my campaign for Congress the same way I did my office as lieutenant governor — trying to create more opportunities for participation and engagement, and really give Vermonters a voice and a stake in our future.” 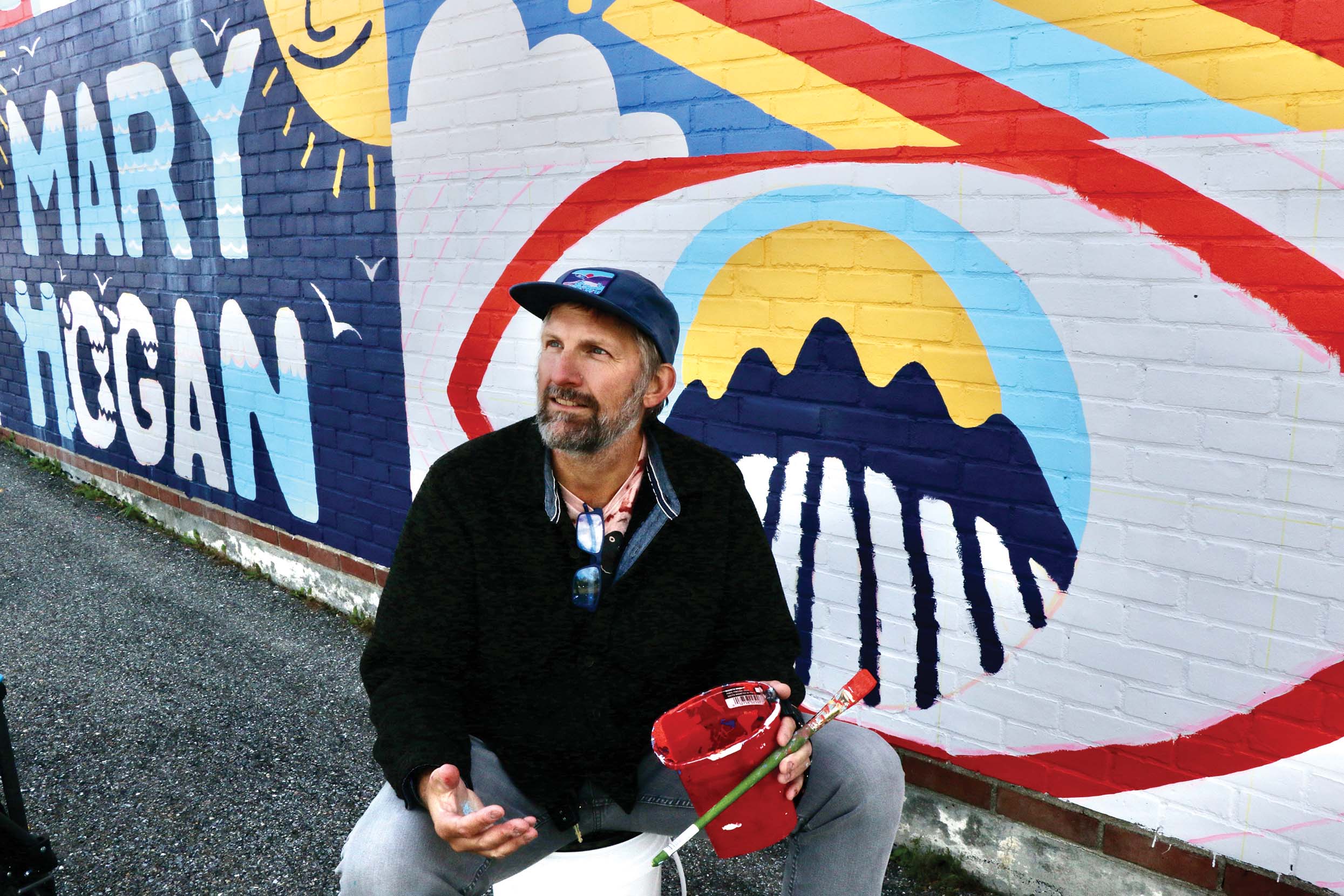 The thirst for a major Mary Hogan mural goes back a long way, according to Michael Kin, wh … (read more)

State board weighs options for Lincoln

During a meeting held at Mount Abraham Union High School last week, the State Board of Edu … (read more)

Ripton, back with ACSD, will fight for local control