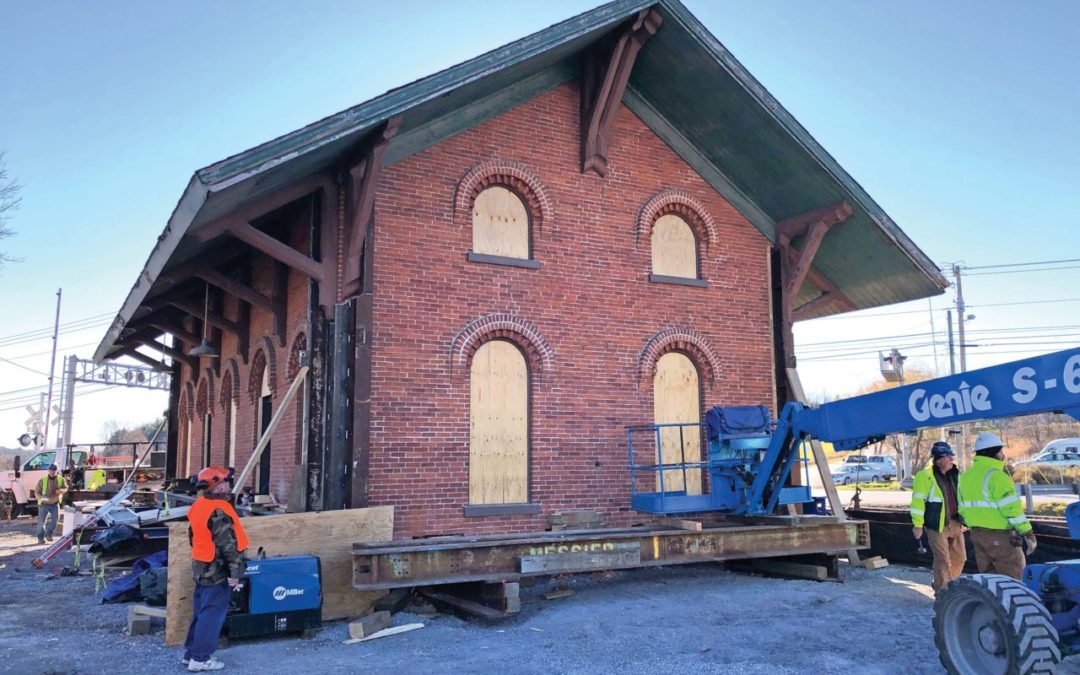 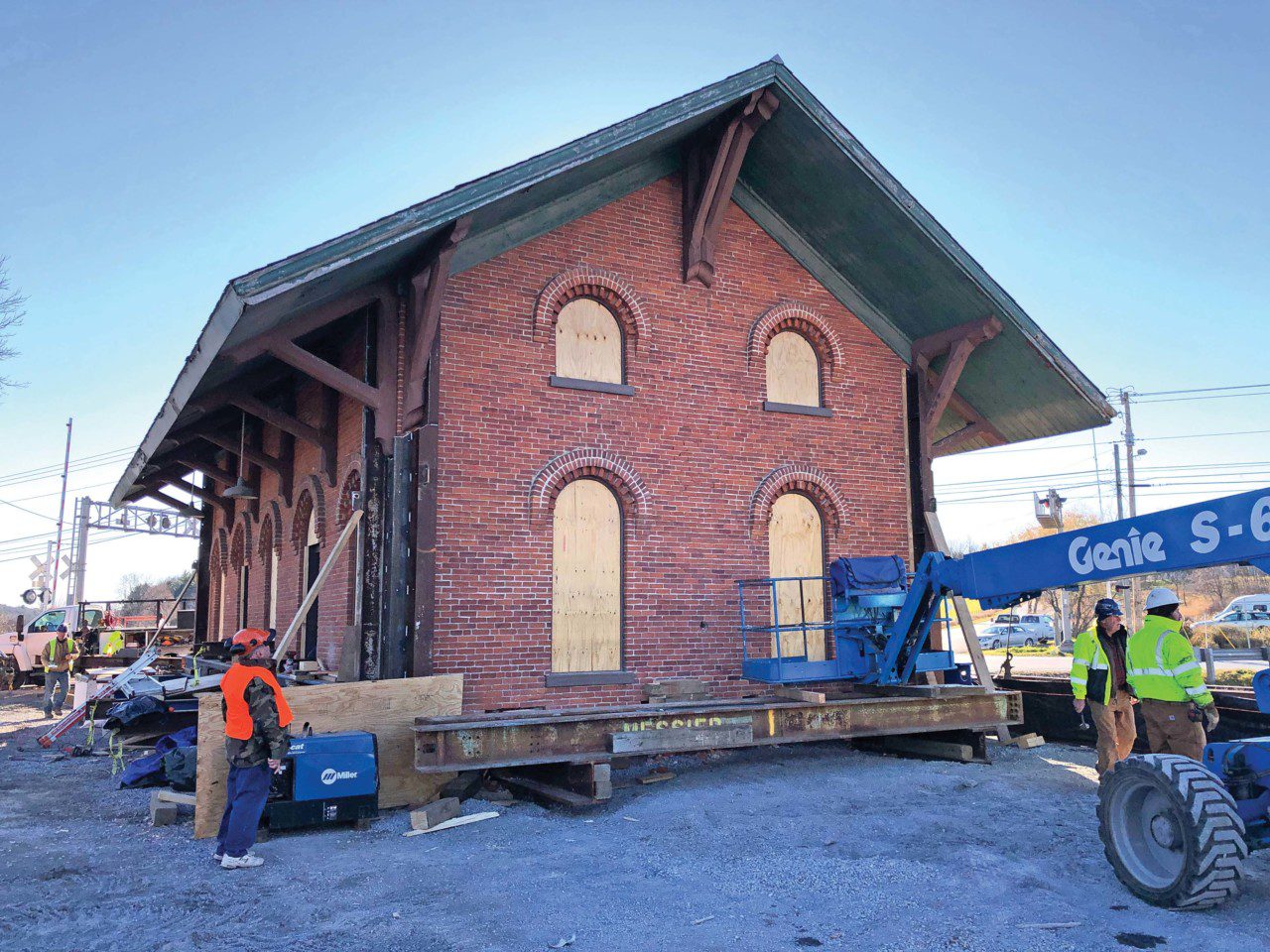 IN A MATTER of weeks, the New Haven Junction Train Depot will be on the move and headed toward its new home next to the town office on North Street. In the meantime, windows, flooring, wainscoting and other interior elements have been removed, and steel supports are being put in place to keep the building stable. Independent photo/Christopher Ross
By Christopher Ross

The project had called for transporting the depot a mile and a half east along Route 17, from its current location at 5450 Ethan Allen Highway (Route 7) to a town-owned parcel on North Street. But complications — including higher than expected costs for temporarily moving powerlines out of the way — have forced town officials to consider alternative routes, including one of their own making.

As it stands now, New Haven intends to plow its own road across private property in order to bypass a number of powerlines. The road would begin at the top of the first hill on Route 17, as you’re driving east from Route 7, cut through a cornfield and come out on North Street, not far from the depot’s new home. 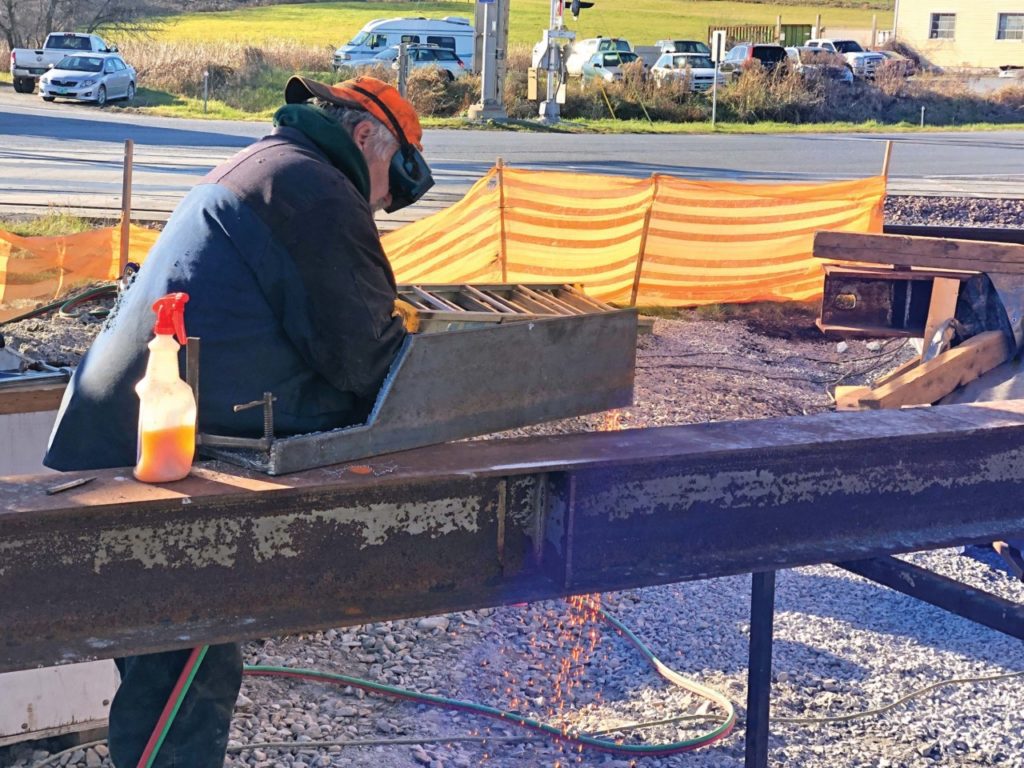 A FABRICATOR WORKS on a steel structural support at the site of the New Haven Junction Train Depot last Wednesday. Such supports will ensure the building remains stable while it’s being moved next month. After a “skeleton” of steel beams, verticals and trusses is installed to protect the building from the inside, and exterior steel supports are attached, the brick building will be wrapped with heavy cable to further prevent strain.
Independent photo/Christopher Ross

“We’re currently working with the landowners to get their permission,” said selectboard member and Historic Train Depot Committee chair Steve Dupoise the day before Thanksgiving. “And we’re working feverishly to get this thing moved ASAP.”

Officials had originally hoped to move the building starting Dec. 16, but the new route will require a Vermont deep freeze to make the ground hard enough to support the operation, so the new plan is to try in mid-January.

MOVE IT OR LOSE IT

Built in the second half of the 19th century, the depot was added to the National Register of Historic Places in 1978.

The Vermont Division of Historic Preservation (VDHP) owns the building, but the lot it sits on is owned by the Vermont Department of Transportation (VTrans).

This past winter, as plans to extend passenger train service from Rutland to Burlington started taking shape, VTrans informed VDHP and its (now former) tenant, Roundtree Construction, that the depot would have to be moved offsite or demolished. It was too close to the tracks and it would dangerously impede visibility for passenger trains approaching Route 7 from the east — at 59 miles per hour.

Within weeks town officials and residents had formed the Historic Train Depot Committee, and by spring they had identified a new home for the building.

Since then, New Haven has received two significant grants toward the moving project: $350,000 from the Northern Border Regional Commission, a federal-state partnership for economic and community development in northern New England and New York; and $400,000 from VTrans.

That $750,000 will be enough to get the building moved to a temporary site, until a new foundation can be poured in the spring, but it won’t be enough to cover the cost of the entire project, which Dupoise estimated to be $1.1 million.

Once the building has been permanently relocated, VDHP plans to chip in $25,000 toward roof repairs. 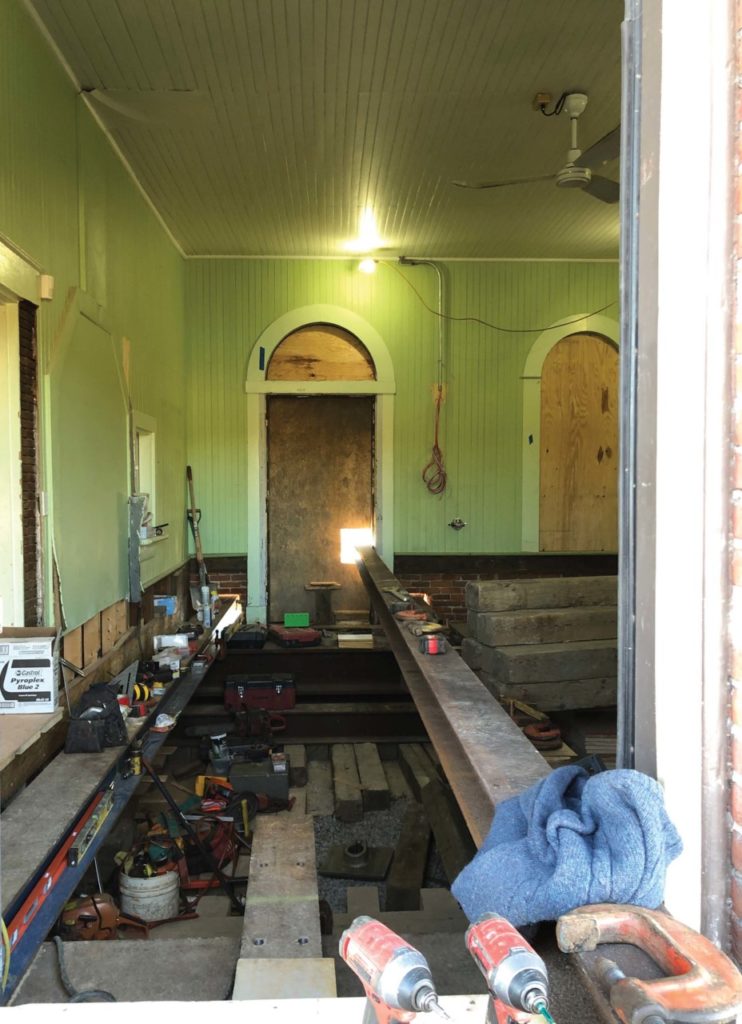 HOLES WERE CUT out of the brick exterior of the New Haven Junction Train Depot to make way for steel support beams (bottom left). Messier House Moving & Construction, which will transport the depot a mile and a half east to a town-owned lot on North Street, estimated there will be “40 tons of iron” under the building by the time it’s prepped and ready to go.
Independent photo/Christopher Ross

The two-story brick depot is 44 feet long and 25 feet wide.

Messier House Moving & Construction of East Montpelier has been onsite since the beginning of November, preparing the building for next month’s move.

“There will be 40 tons of iron under this building,” co-owner Norm Messier told the Independent, referring to the steel support beams, some of which will be 60 feet long. He estimated the building itself weighs 80 tons.

Messier’s son Jason said the crew would likely work right up until Christmas, with the hope of getting the building off the ground in early January.

After the support beams are in place, Norm Messier explained, jacks will be used to lift the depot off the ground and a number of dollies designed for moving buildings will be positioned underneath. A hydraulic pump that will supply power to the dollies.

VTrans will likely ask them to get started very early in the morning, to minimize traffic disruptions, Jason Messier said. They’ll begin by crossing the Jiffy Mart parking lot, in order to avoid tying up traffic on Route 7, and then they’ll turn east, up Route 17, before going off-road at the top of the hill.

The Messiers have a four-day window to move the building once they get started, in case they encounter unforeseen obstacles or the weather stops cooperating. It’s likely they’ll have to take the trip in segments, parking the building overnight before proceeding the next morning.

Along the way they’ll encounter a couple of overhead powerlines, which will need to be shut down as they pass underneath, Norm Messier said.

As for the terrain, much will depend on Mother Nature, he added. But he’s used to it. He’s been doing this work for more than 50 years.

Messier expects the move will cause quite the spectacle, drawing crowds from all over.

The Independent will be there too, with iPhone cameras set to “video.”

In the meantime, keep on eye these pages for further updates as moving day approaches.