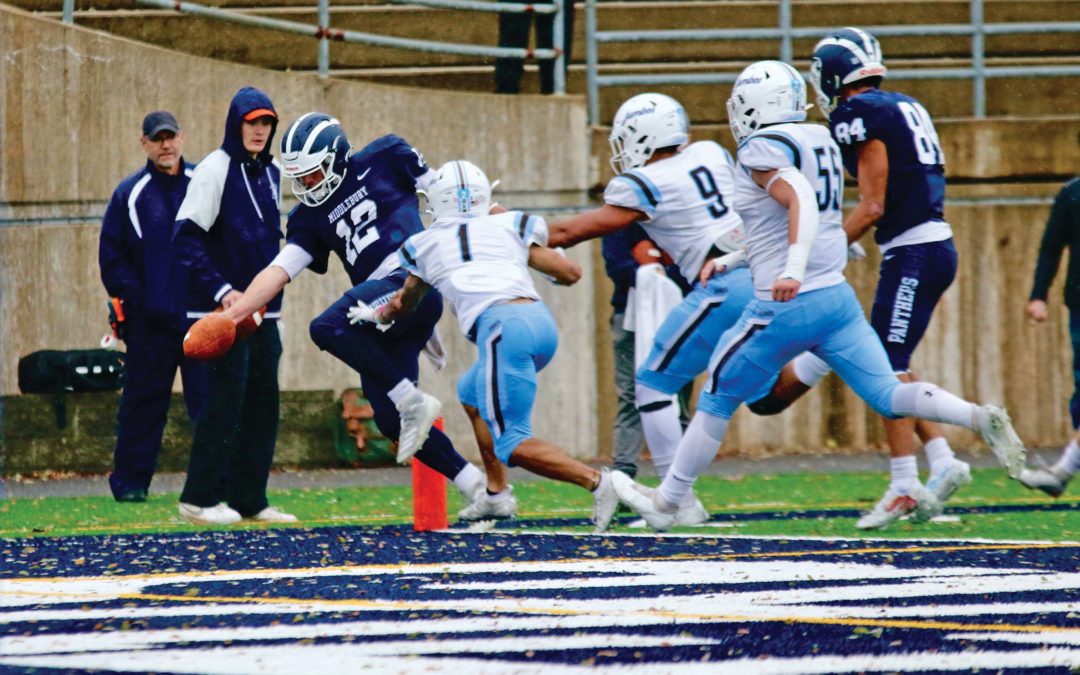 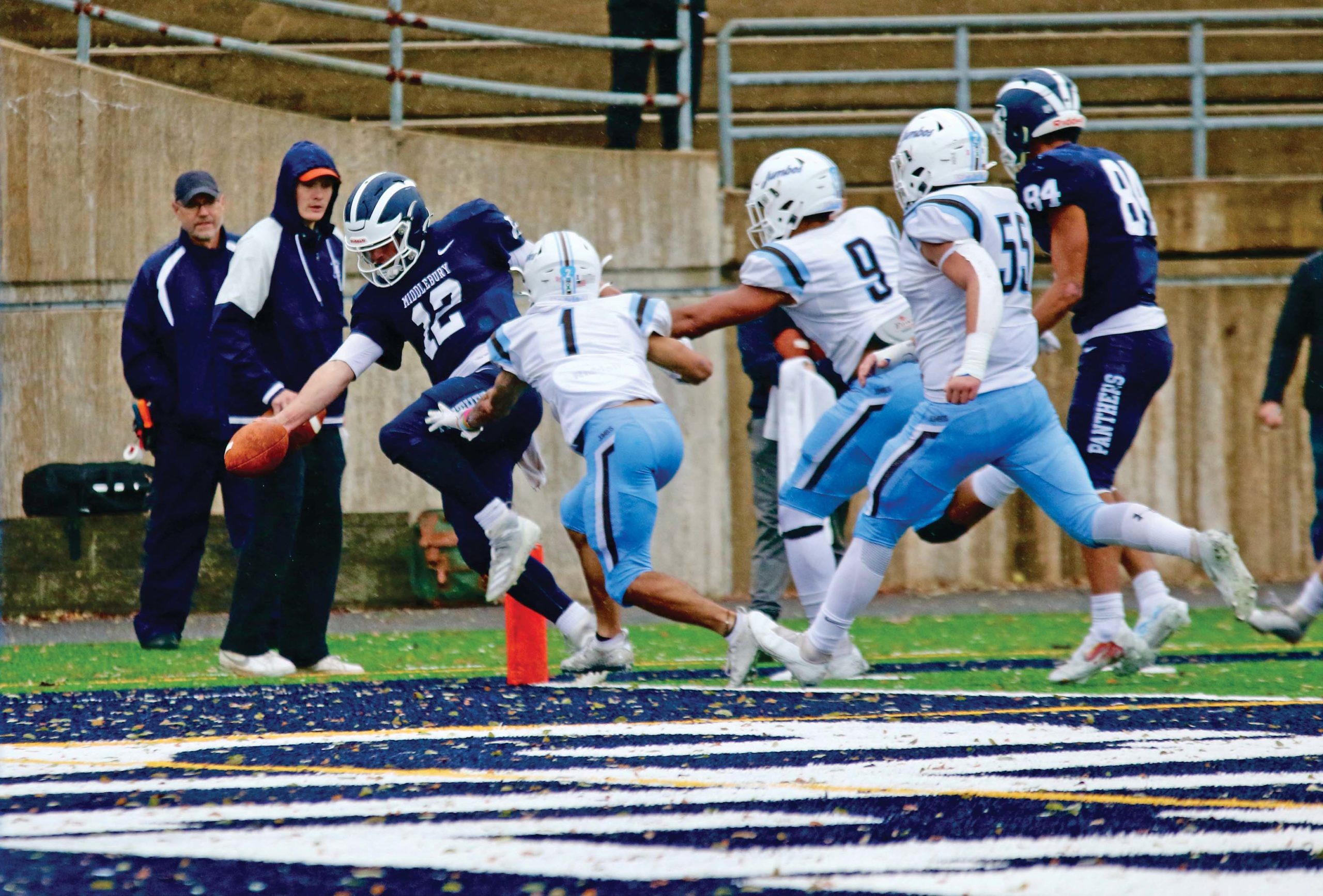 MIDDLEBURY QUARTERBACK WILL Jernigan beats a trio of Tufts defenders to the corner of the end zone to score one of his two rushing touchdowns during the Panthers’ home game on Saturday. His scores weren’t enough to prevent the visiting Jumbos from prevailing, 34-27. Independent photo/Steve James

MIDDLEBURY — The Middlebury College football team dropped its season finale on Saturday, falling to visiting Tufts (4-5) by a score of 34-27. The Panthers closed out their campaign with a 3-6 record after seeing a two-game winning streak snapped.

Tufts jumped on the scoreboard first, 6-0, with a 10-play, 82-yard drive finished off with a three-yard Mike Pedrini run.

In the second quarter, Tufts took advantage of an interception at its own 24. On the next play, Michael Berluti tossed a TD pass to Jackson Butler to make it 13-0. 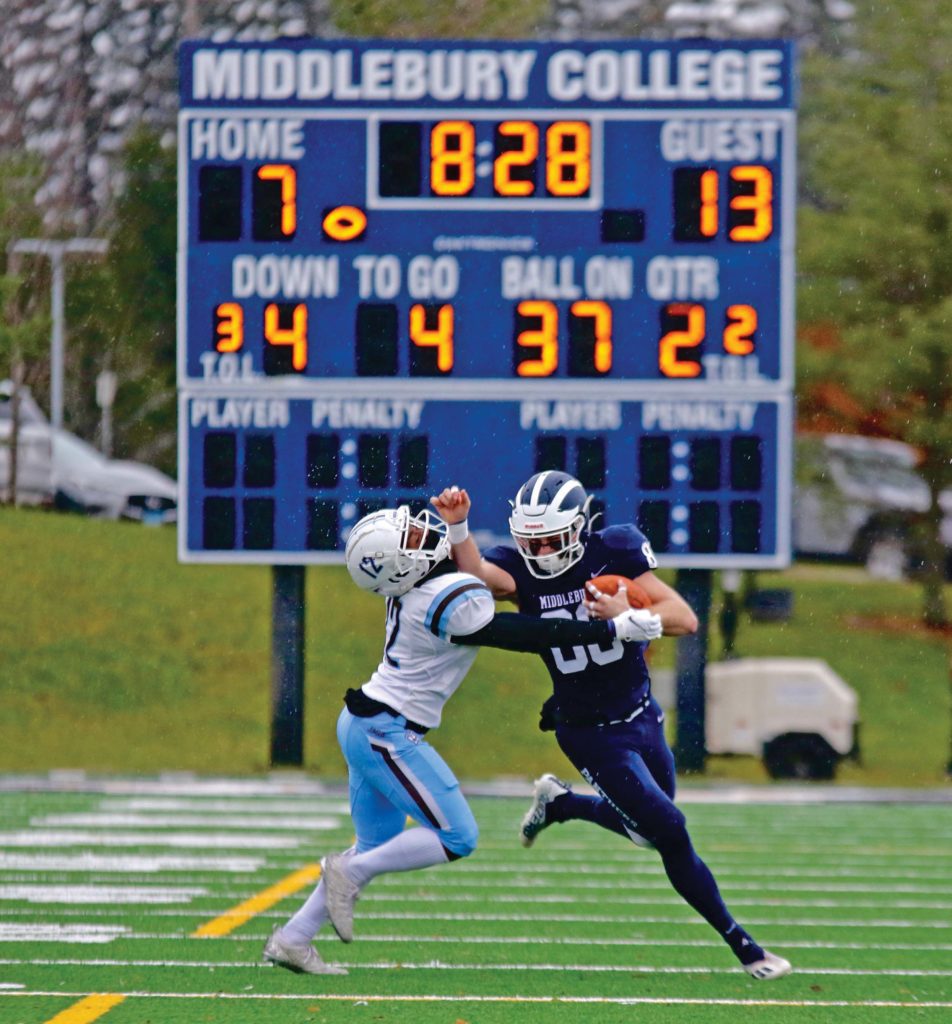 PANTHER PUNTER COLE Crider stiff-arms a Tufts tackler during his 37-yard run on a second-quarter fake punt during Middlebury’s home football game on Saturday. Crider’s run came on a fourth-and-four play in Panther territory and helped set up the Panthers’ second touchdown, which tied the score at 13-13.
Independent photo/Steve James

On the ensuing possession, Panther QB Will Jernigan capped off an eight-play, 75-yard drive with a 13-yard scoring run to make it 13-7. With 7:19 left in the first half, Peter Scibilia punched for a score that knotted the game at 13-13. Punter Cole Crider’s 37-yard run on a fake punt helped set up that touchdown.

On their next possession another Jernigan run gave the Panthers their first lead at 20-13. The Jumbos responded with a 26-yard TD pass from Berluti to Billy Dunn, and it was 20-20 at the half.

Tufts scored on its first two possessions of the second half, Jumbo back Tyler Johnson ran for nine- and six-yard scores as Tufts established a 34-20 advantage.

The Panthers answered with 14:55 remaining in the fourth quarter by going 75 yards in 11 plays over 3:17 to score with a Jernigan pass to Donovan Wood from nine yards out. But the Panthers could not mount another serious threat.