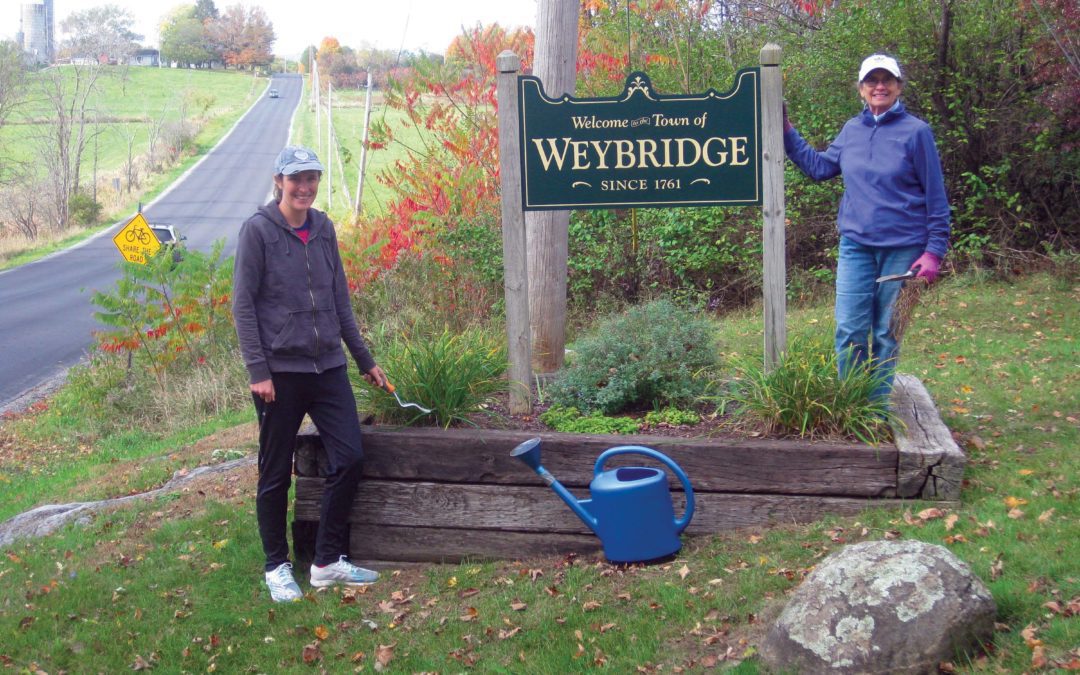 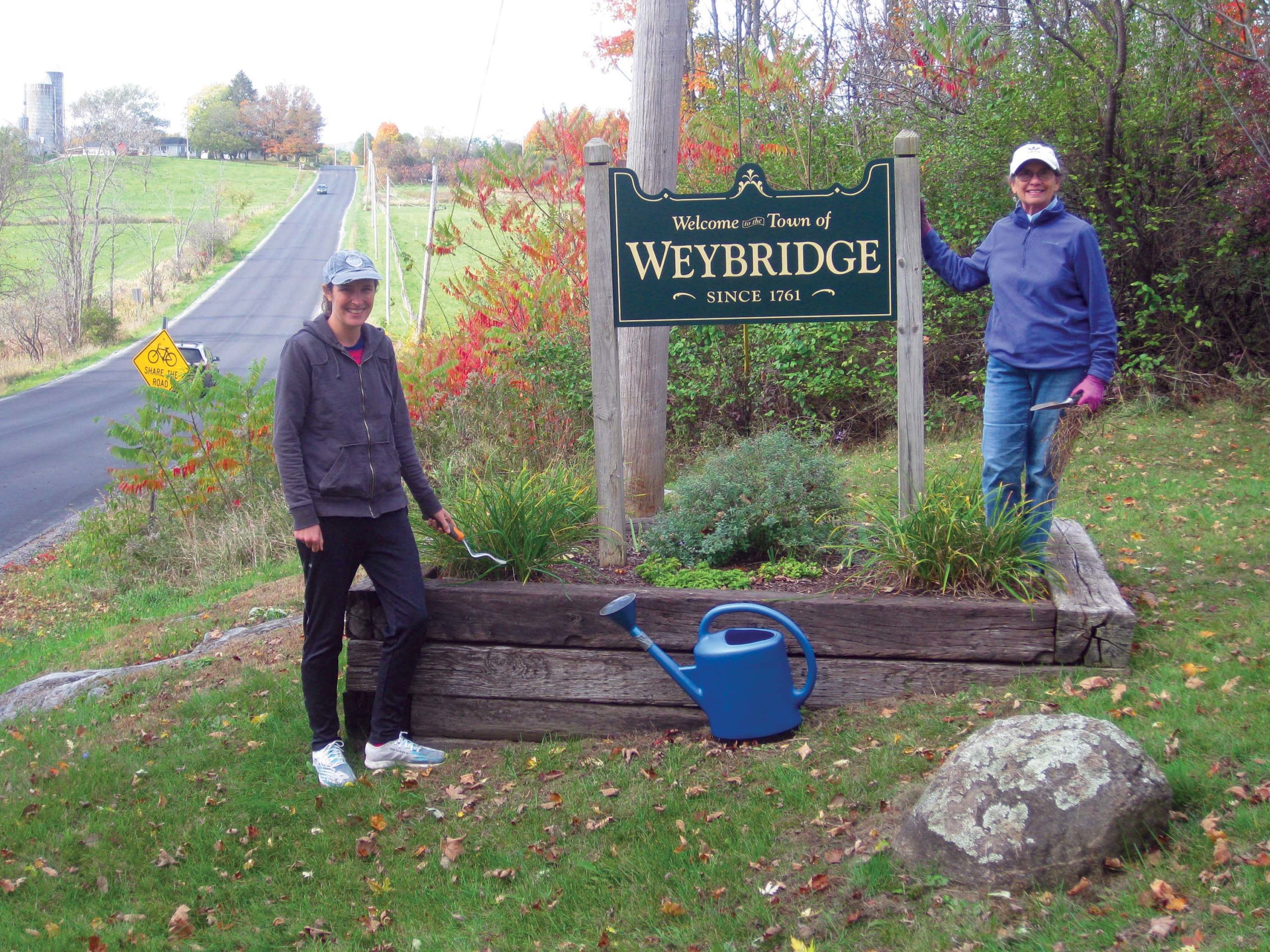 THIS LITTLE GARDEN on the corner of Weybridge Road and Pleasant View Terrace, which welcomes people to the Weybridge community, was put in by the town a number of years ago. Pulp Mill Bridge Road resident Wilfred Bilodeau has made sure this garden was cared for and drove his car with gallon jugs of water to keep it going. Neighbors continue to do the same. Shown are Kelsey Eberly, left, and Jane Burton. Neighbor Mary Backus missed the photo but also tends the garden.

WEYBRIDGE — The historic Pulp Mill Bridge spanning Otter Creek between Middlebury and Weybridge has been a major tourist stop for many years. The triangle garden on the Weybridge end of the covered bridge at the junction of Pulp Mill Bridge Road and Morgan Horse Farm Road has been planted and maintained by neighboring volunteers since 1949 when Joe D’Avignon and his family moved to Weybridge.

In 1977 his son Leonard donated railroad ties to build the triangle garden over a wet area at the junction. In 1977 son Jim D’Avignon Sr. and his wife Pat, an avid gardener, brought beauty and color to the site as the major caregivers along with their daughters and neighbor Wilfred Bilodeau until the late 1980s, when they asked Jane Burton if she would take over the garden. 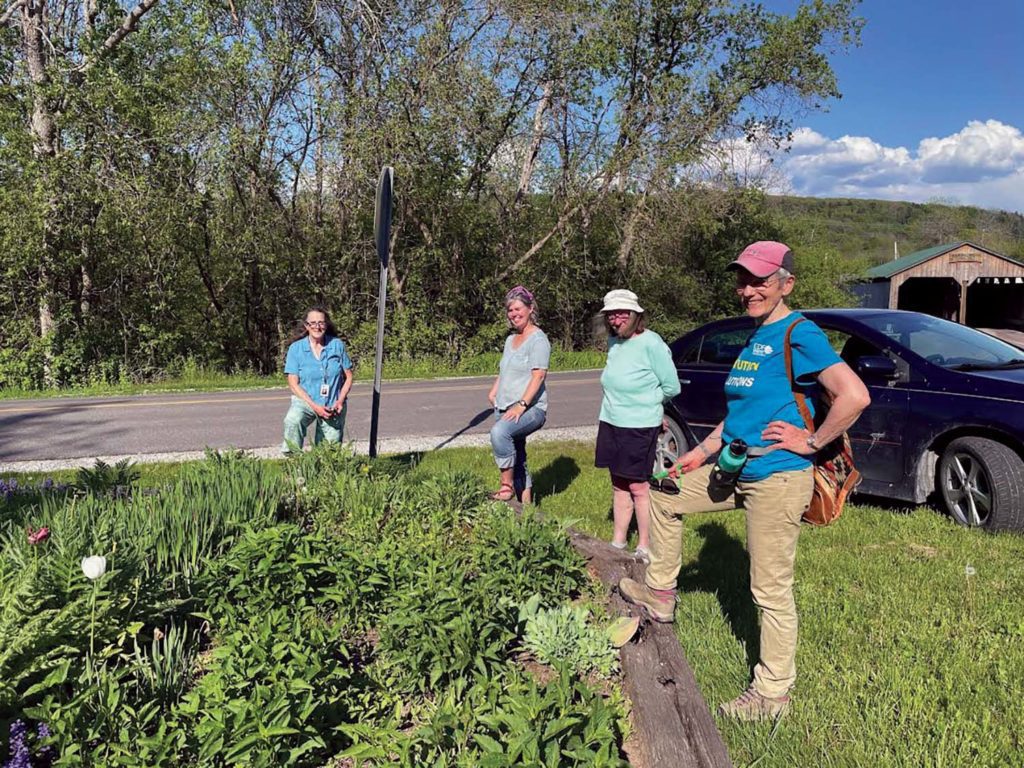 FOLKS WHO KEEP Weybridge beautiful tend to the garden on the west end of the Pulp Mill Bridge. Shown from left are Christina Wadsworth, Julie Barry, Nancy Cobden and Fran Putnam. Other regulars Abi Session and Lexa deCourval are not pictured.
Photo by Lexa deCourval

Lexa deCourval volunteered occasionally with Burton in the late 1990s before she took over from 2009 to 2013.

The town planted two evergreens on either side of the Weybridge sign and Jane added more spring blooming bulbs and perennial plants to carry color throughout the season. She volunteered off and on as needed.

From 2013 on neighbor Christina Wadsworth volunteered, and recently enlisted a new group of neighborhood volunteers to carry on the tradition.