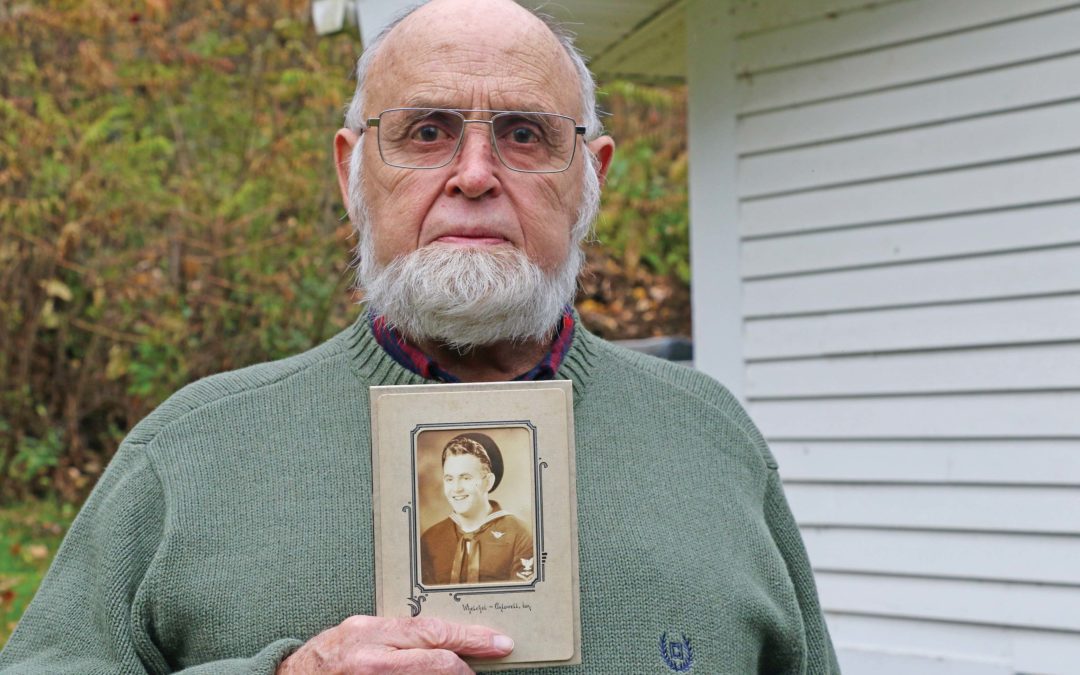 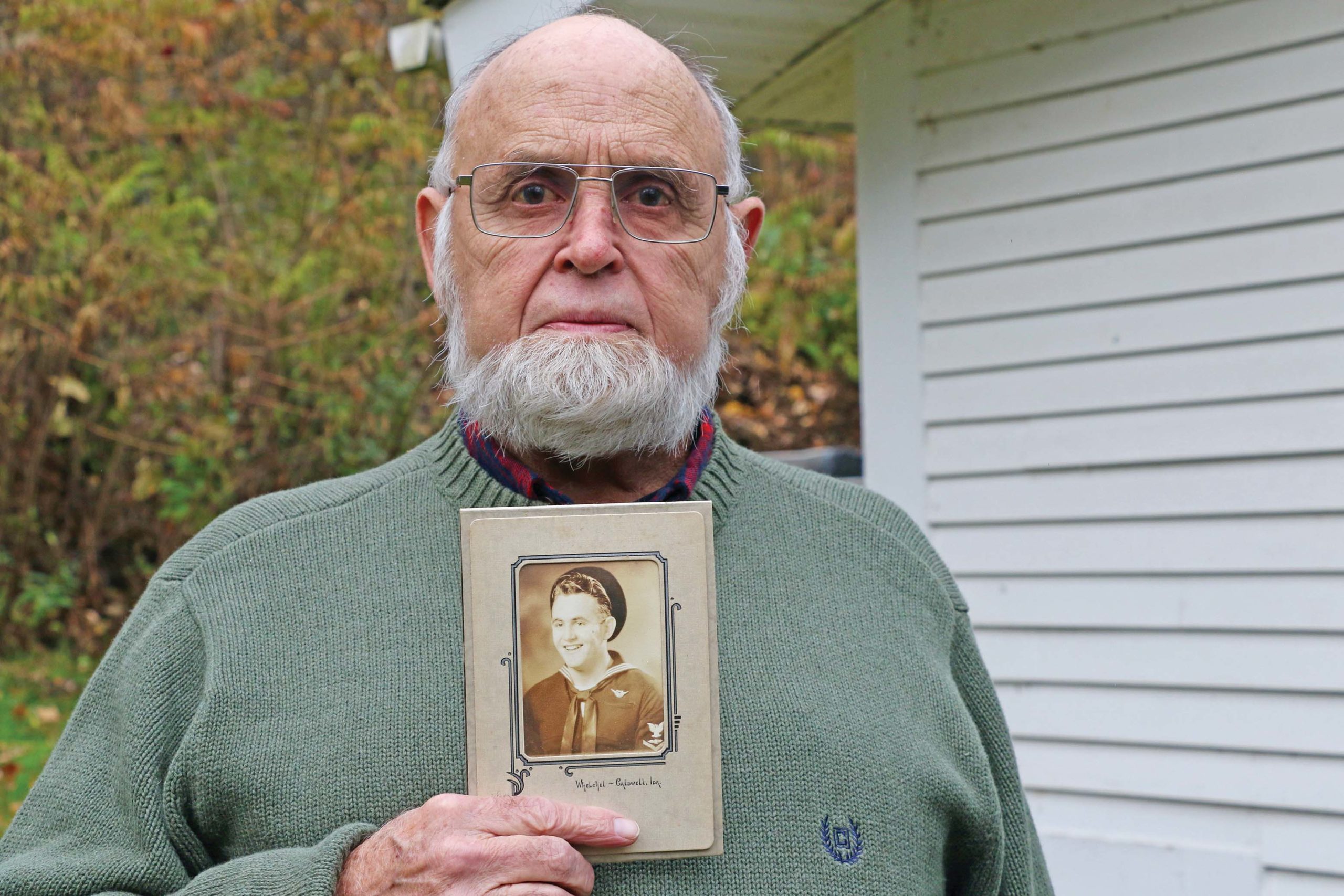 WAYNE DARLING OF Monkton holds a photo of his uncle Clay Darling when he was a member of the U.S. Navy in World War II. On Veterans Day, Wayne Darling will receive a Purple Heart for his uncle, who was killed in action during the waning days of the war. Independent photo/Steve James
By Christopher Ross

MONKTON — During the summer of 1945, an Allied victory over Japan seemed imminent enough that Frank Darling, 55, of Caldwell, Idaho, felt the urge to celebrate in advance. After all, his three sons, Dale (27), Elden (25) and Clay (20), had survived the war and would soon be coming home.

Tragically, that celebration never got under way.

On or about July 28, it is believed that Aviation Radioman 3rd Class Clay D. Darling — who had enlisted in the Navy upon graduating high school and who had been stationed in the Pacific theater on the aircraft carrier U.S.S. Randolph — took off in a torpedo bomber piloted by Lt. Claire T. Williams of Wisconsin, and never returned.

The events of that raid are echoing through the years and the miles in Addison County this month.

The airplanes on that mission had been tasked with attacking Japanese submarines moored near the Kure naval port, just south of Hiroshima, as part of a larger assault on the Japanese Imperial Navy and shipping networks.

Japanese naval strength had by then been so crippled that it was deemed a minor threat, but the attack on Kure went forward, in part because a number of Japanese ships anchored there had been deployed in the 1941 attack on Pearl Harbor. 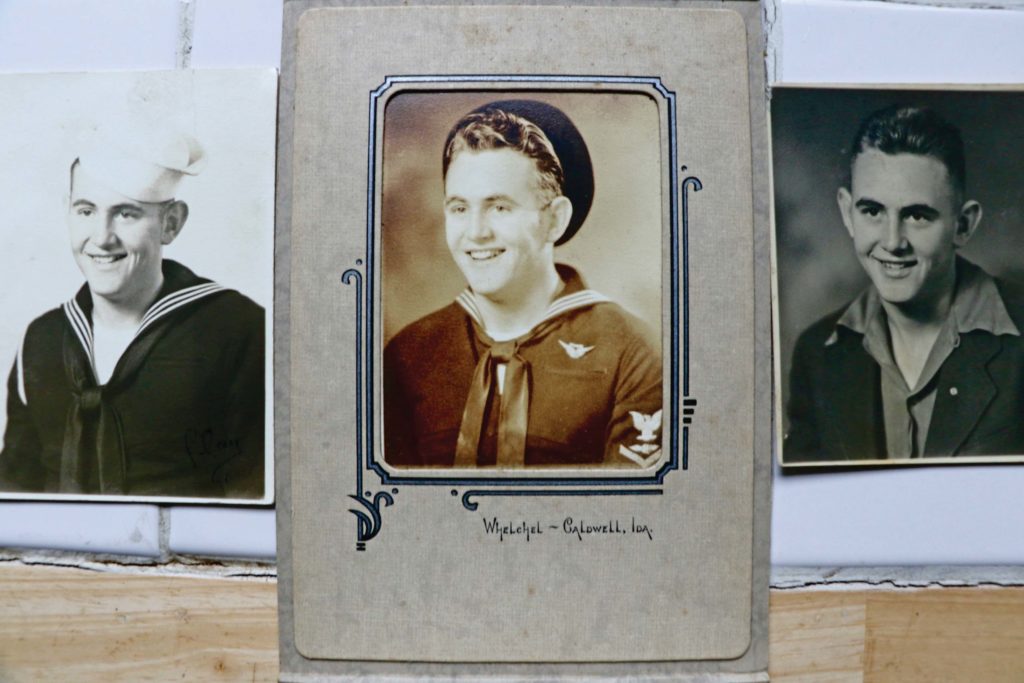 MONKTON RESIDENT WAYNE Darling displays these photos of his uncle Clay Darling, who enlisted in the U.S. Navy right out of high school. Clay Darling fought and died in the Pacific Theater of World War II, serving on the aircraft carrier U.S.S. Randolph.
Independent photo/Steve James

On Aug. 6, nine days after Clay Darling’s last known flight, the U.S. detonated an atomic bomb over the city of Hiroshima. On Aug. 9, the U.S. detonated another A-bomb, this one over Nagasaki. And on Aug. 15, less than three weeks after Darling was presumed to have been shot down, Japan surrendered.

Darling, Williams and several other soldiers listed as Missing in Action after the attacks on Kure and the Inland Sea were officially declared dead on July 29, 1946, according to HonorStates.com.

The Purple Heart awarded to Clay D. Darling, for “being wounded or killed in any action against an enemy of the United States or as a result of an act of any such enemy or opposing armed forces,” would have been presented to Darling’s parents, Frank and Mabel Darling.

What happened to the medal after that is a matter of conjecture, but thanks to the detective work of a couple of veterans, along with coordination between two American Legion posts, it’s about to make its way back to the Darling family in Vermont, more than 75 years after it would have been presented. 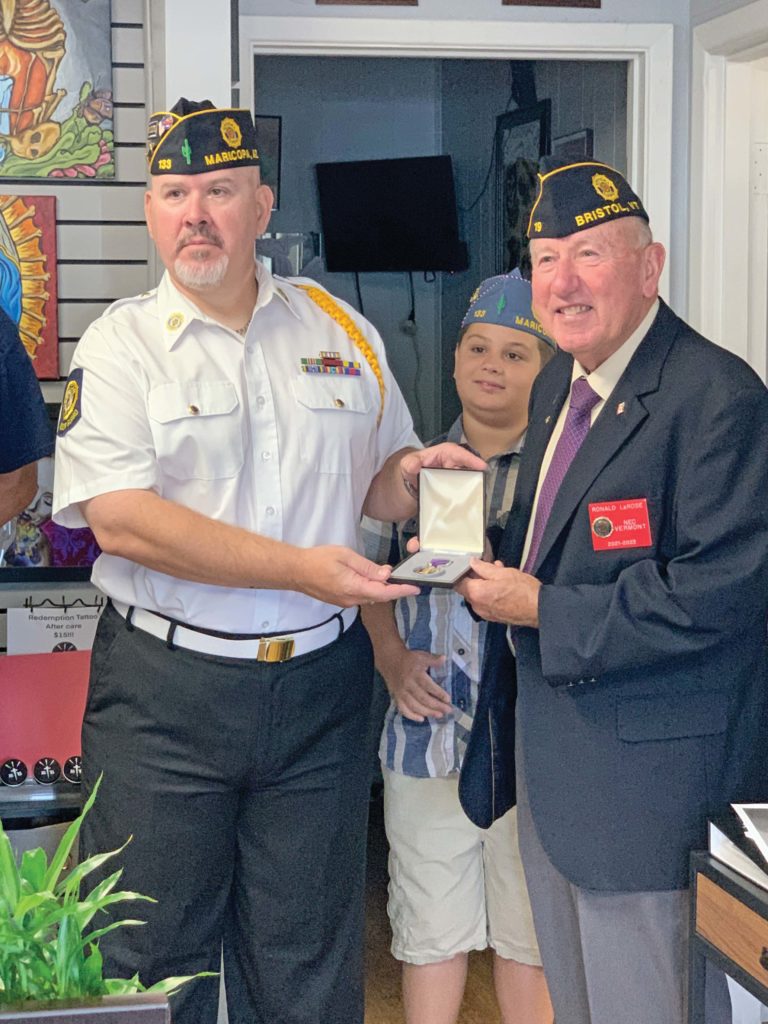 Ronald LaRose, commander of the American Legion Post 19 in Bristol and, until recently, the Department of Vermont Legion Commander, got an unusual phone call this past August.

Bryan Moore, commander of American Legion Post 133 in Maricopa, Ariz., told LaRose he had come into possession of Clay Darling’s Purple Heart and had identified a member of Darling’s family — his nephew, Wayne Darling, of Monkton.

If he got the medal to LaRose could LaRose get it to Wayne Darling?

Coincidentally, it so happened that LaRose and his wife, Connie, were heading to Arizona already, for the National American Legion Convention in Phoenix.

So on Sept. 3, an American Legionnaire picked up the LaRoses in Phoenix and drove them to Maricopa, 41 miles to the south.

“There was nothing but desert, cacti and wild horses along the way,” Connie LaRose recalled.

But instead of traveling to Post 133, they stopped … at a tattoo parlor.

It turns out that sometime during the mid- to late-1990s, an artist named Nick Sanchez had accepted Clay Darling’s Purple Heart as payment for his work. Whether or not it was a member of the Darling family who paid with the medal is unclear.

Sanchez placed it in some box or other and forgot about it, LaRose said. Then, several years ago, after the artist had bought a building in Maricopa and started a tattoo shop there, his receptionist — U.S. Navy veteran Ruth Strickengloss — found it.

“You know we need to get this back to the family,” she told Sanchez, according to a Sept. 4 story by Fox 10 Phoenix.

Strickengloss wrote a post about the medal on her veterans Facebook page, LaRose said, and a fellow Legionnaire named Jim Bussey responded and “ran with it.”

Using military, census and various online records, Bussey reconstructed Clay Darling’s story, but he couldn’t find a living relative, he said in his summary of the story, which LaRose shared with the Independent.

Eventually, Bussey connected with someone building a Darling family tree on Ancestry.com, who connected him with Wayne Darling. 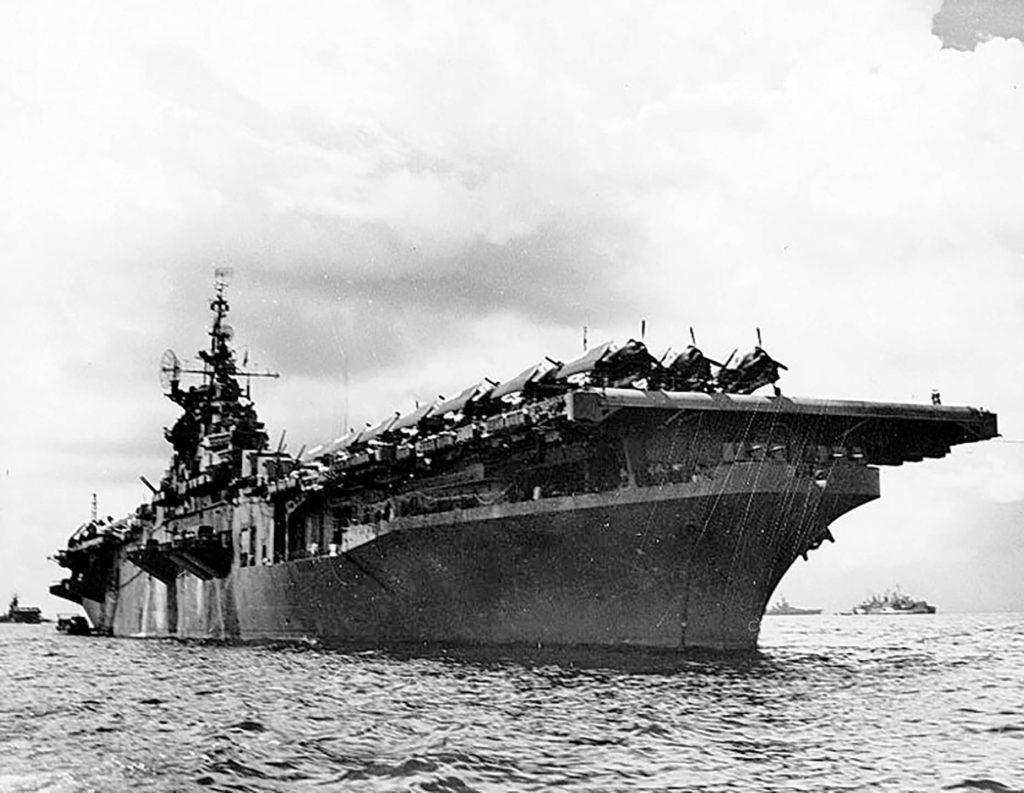 AVIATION RADIOMAN 3RD Class Clay Darling was stationed on the U.S.S. Randolph in the Pacific in 1945 when his plane went down during a mission. His nephew Wayne Darling of Monkton happened to visit the ship during the 1960s, where he saw a plaque naming his uncle.

When Wayne Darling was growing up in Idaho, there wasn’t a lot of discussion about his Uncle Clay, he recalled.

“I knew I’d had an uncle who had died at the end of World War II, but my family didn’t have much interest in revisiting the topic of a fallen son,” he said.

During the mid-1960s, as part of his ROTC training, Wayne Darling had spent three months on the U.S.S. Randolph, the aircraft carrier his uncle had served on 20 years earlier — and discovered on its hangar deck a brass plaque dedicated to service members who were lost while serving on that ship. His uncle Clay’s name was inscribed there.

But Wayne Darling hadn’t known about his uncle’s Purple Heart.

Its recent resurfacing has “sparked a little bit of family research… and quite a bit of electronic chatter about my uncle, his Purple Heart and which family members might have had the medal,” Darling said. 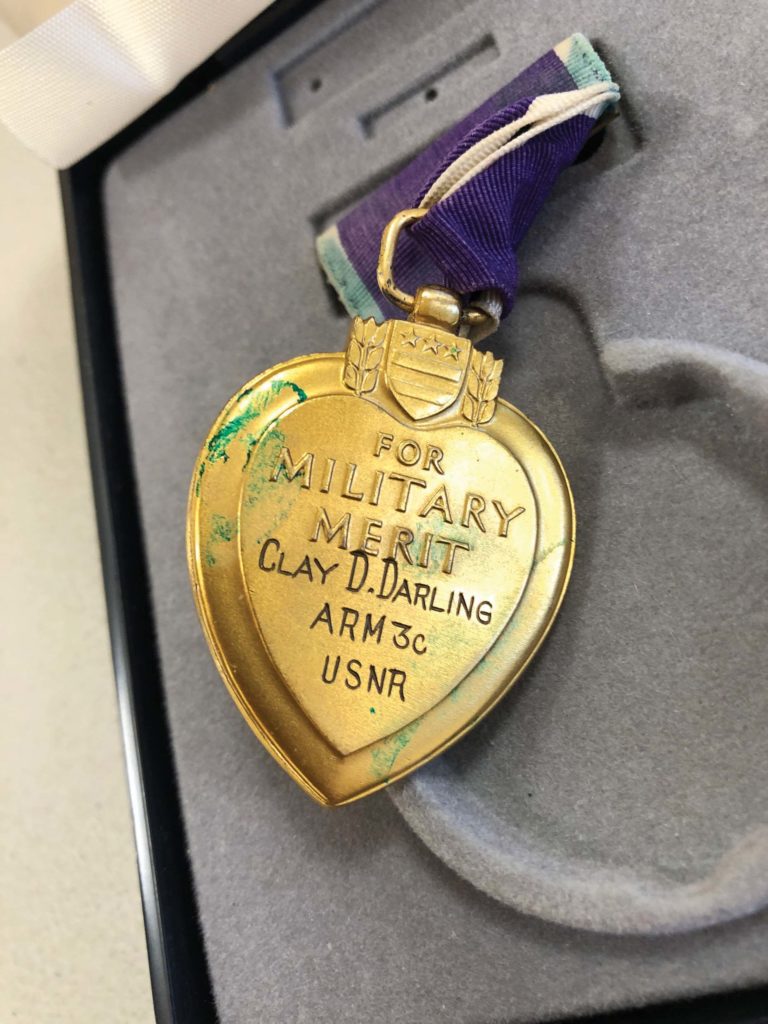 U.S. NAVY SERVICEMAN Clay D. Darling was presumed killed in action when the airplane he was in failed to return from a mission to sink Japanese submarines in a harbor near Hiroshima just nine days before the atomic bomb attack. The Navy issued this Purple Heart medal to his parents, and this week it will find its way to his nephew in Monkton.

But now, “the medal is going to come back to the family,” he said. “Which is good.”

It was Wayne Darling who told the Independent about his grandfather Frank and the end-of-war celebration that was over before it started.

Wayne Darling, with his wife, Peggy looking on, and his sister and her family in attendance, will accept it.

The engraving on the back indicates it was the original medal presented to Frank and Mabel Darling more than 75 years ago — replacement medals don’t carry the name and rank, noted Post 19 Adjutant Alan Smith Sr.

Such medals “usually mean more to the families than to the service members,” Smith said. “As the old saying goes, a medal and 50 cents will get you a cup of coffee.” But for a family, something like a Purple Heart often represents a tangible, final memory of a fallen soldier.

LaRose feels honored to be a part of returning Clay Darling’s medal to a family member.

“Our job is to advocate for our veterans,” LaRose said. “When you’ve been in the military it doesn’t matter which branch, it’s a fraternity, the medals are the same. When something like this comes up, this is what we do — to bring closure.”

For more information about the Purple Heart visit tinyurl.com/militarymerit.