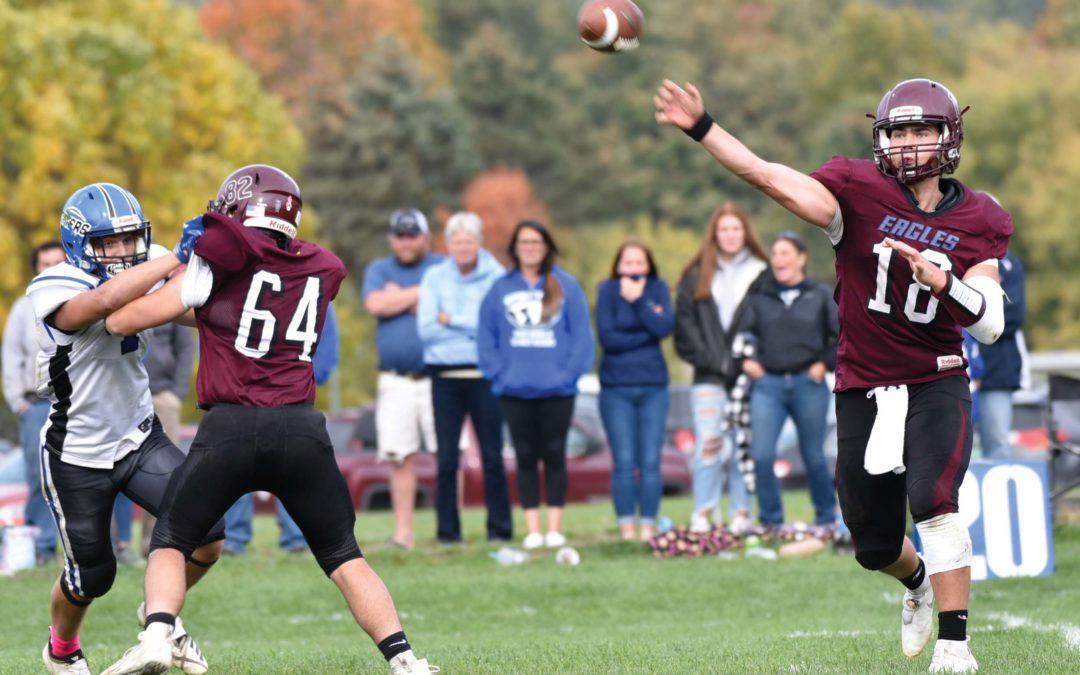 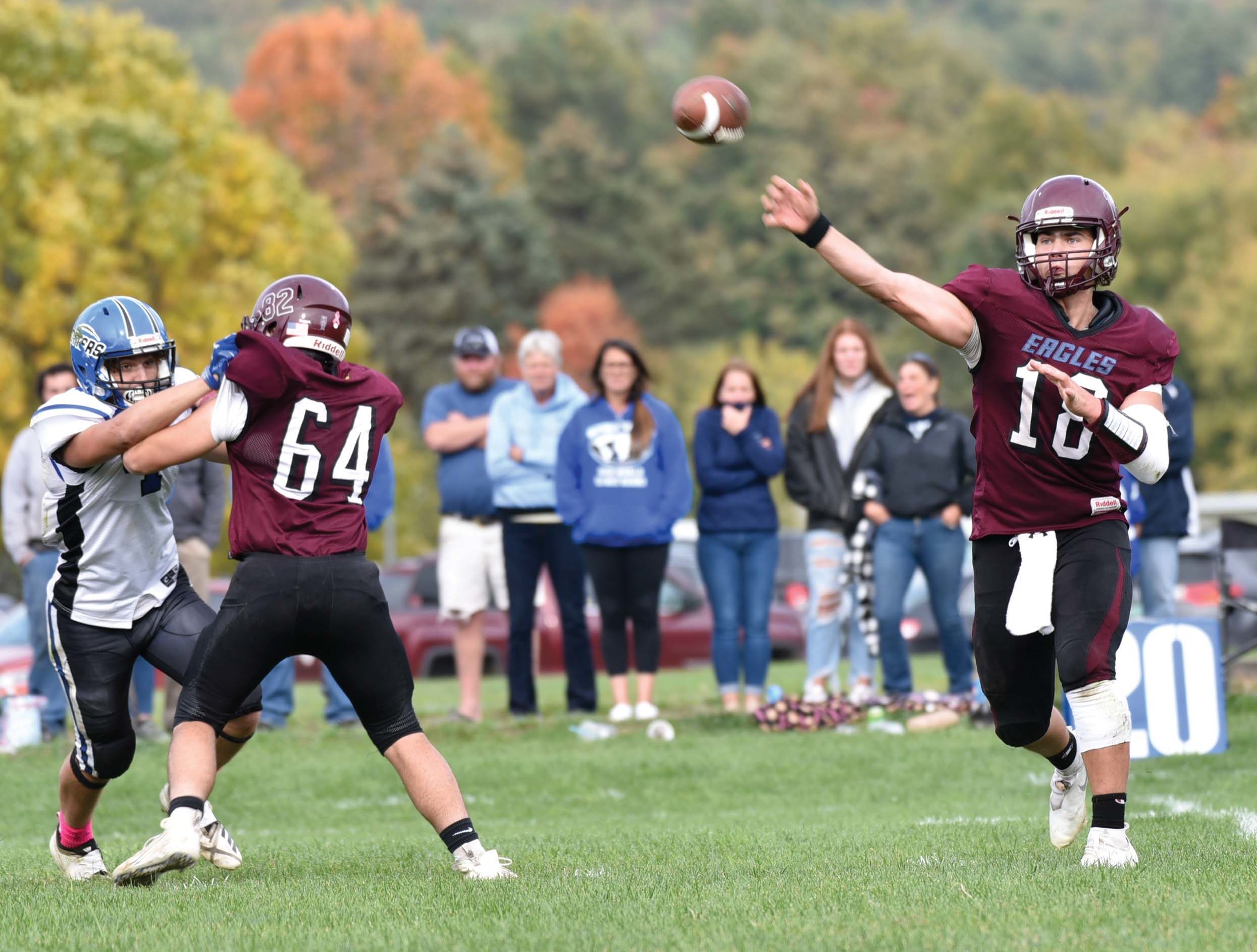 BRISTOL — The Mount Abraham-Vergennes cooperative football team converted seven Otter Valley turnovers into 30 points on Saturday as the Division II Eagles won for the first time this season, 44-20, at the visiting Otters’ expense. 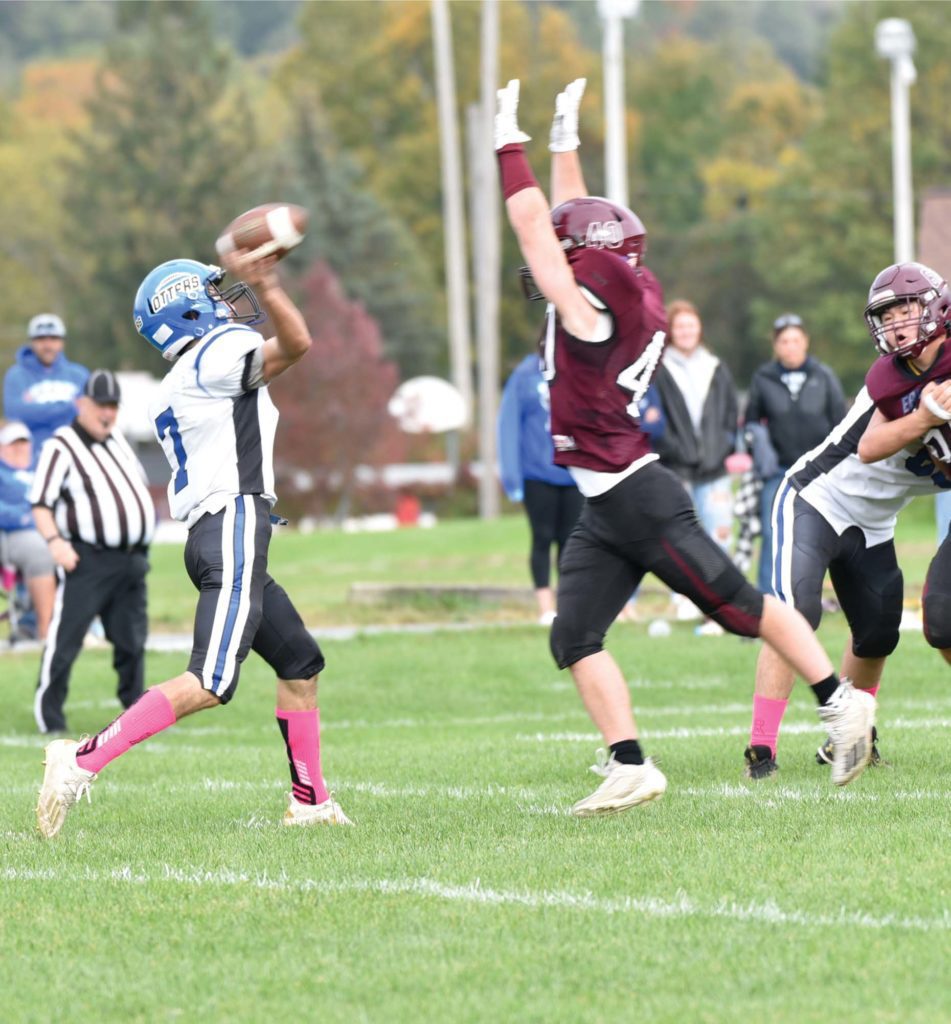 The 1-4 Eagles, who lost leads in their previous two games, didn’t blink when the D-III Otters pulled to within 27-20 midway through the third quarter.

Instead, they marched 66 yards and to set up Adam Mansfield’s third field goal of the game with six seconds left in the period, and the Eagles led by 10. Thirty-five yards of that drive came on the ground, with Mansfield, the quarterback, and running back Beau Carpenter lugging the ball.

On that march the Eagles also faced third and 17 from their own 35. In possibly the key play of the game Mansfield scrambled right and threw a bullet down the sideline to Carmelo Miceli for 20 yards and another first down.

In the fourth quarter Mansfield then bolted for two scores both set up by Eagle interceptions. The first was a two-yard burst up the middle that capped a 40-yard drive after Eagle safety Ian Funke picked off Richard Lafountaine at midfield.

The second came after hard-rushing Eagle lineman Jamison Couture batted a Lafountaine pass into the air and made a diving catch on the OV 6-yard line. Mansfield burst up the middle again to create the final score.

That late outburst followed a back-and-forth game. On its first possession OV moved well behind starting quarterback Caleb Whitney, who took snaps for three quarters, but a Miceli fourth-down sack halted the march on the Eagle 43.

The Eagles then marched 57 yards to take a 7-0 lead. The score came on a 15-yard pass from Mansfield to Miceli. Mansfield kicked the first of his four points-after.

The turnover bug bit the Otters in the second period, although to be fair the Eagles’ defense deserves credit, too. On the Otters’ first possession of the quarter, Miceli ripped the ball loose from Whitney on a blitz and recovered on the OV 23.

On the next play, Mansfield dumped the ball to Miceli in the left flat, and he weaved his way through the defense to make it 14-0. 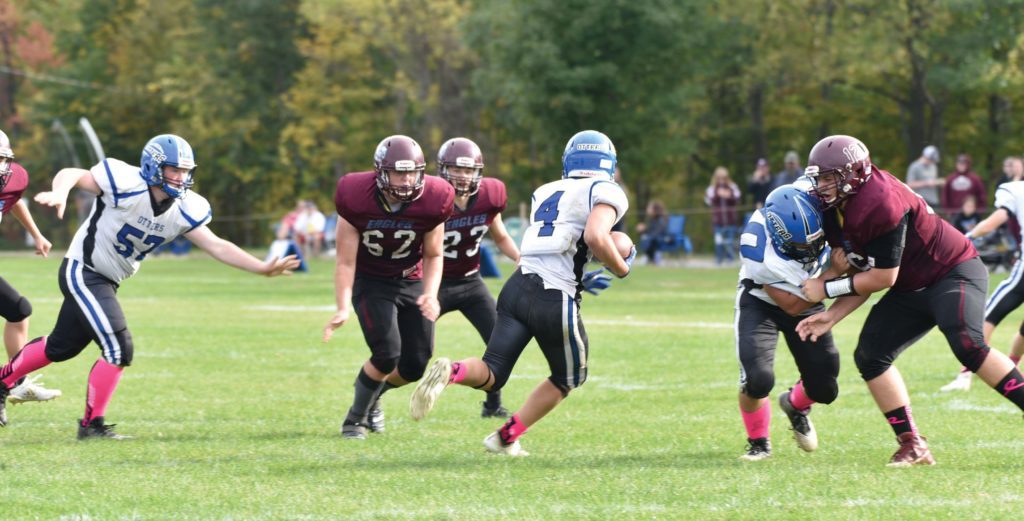 OV came right back. Whitney found a wide-open Dylan Stevens-Clark downfield, and he raced 62 yards to the Eagle 3. Two plays later, Keevon Parks punched it in from the 4, and Brady Diaz ran in the conversion to make it 14-8 at 8:54.

The Otters forced a three-and-out, but a big Collin Dupoise hit on punt returner Isaac Whitney jarred the ball loose, and Miceli recovered on the OV 47. The Eagles took advantage with a 31-yard Mansfield field goal at 5:06, and it was 17-8.

Again the Otters fumbled, and this time Spencer White recovered for the Eagles on the OV 33. Soon after Mansfield booted a 30-yard field goal at 2:15.

Next Funke picked off Whitney and returned 10 yards to the OV 12, and the Eagles were back in business. On the next play Mansfield hit Tristan Parker in the left side of the end zone to make it 27-8.

The Otters fought back. Whitney hooked up with Brady Diaz for 45 yards to the Eagle 25, and from there tossed a TD pass to Tucker Babcock, and at halftime it was 27-14.

After the Otters stopped the Eagles’ opening drive at the OV 41 on fourth down, they struck quickly to make it 27-20. Whitney converted a fourth-and-one by hitting Stevens-Clark for eight yards to the Eagle 41, and on the next play he bolted 41 yards down the right sideline to make it 27-20 at 6:34 of the third.

It was anybody’s game at that point. But the Eagles made their long march to a field goal, and then turned the two fourth-quarter interceptions into points to clinch their first win of 2021.

The Eagles outgained the Otters, 307-217 yards, as Mansfield completed 11 of 20 passes for 150 yards, including seven to Miceli for 91 yards. Carpenter finished with 115 yards on 15 carries, and Mansfield added 58 yards on the ground. Defensively, Miceli (two), Ryan Stoddard (two), Noah Gargano and Lucas Grover picked up sacks that totaled 50 yards of losses. 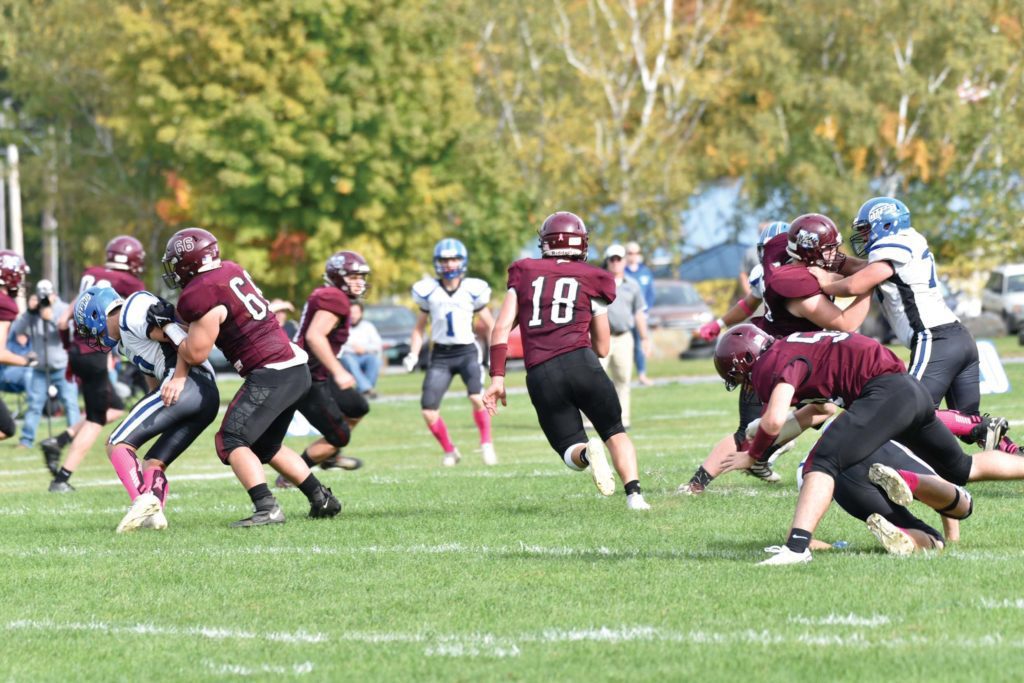 Whitney connected on nine of 16 attempts for 189 yards and rushed six times for another 46 yards, but the Otters managed just 78 yards rushing on 18 attempts.

OV Coach Kipp Denis credited Mount Abe for running the ball “right down our throats” on the pivotal third-quarter drive, but said his team’s turnovers were the big issue.

“I don’t care what team you are, you turn the ball over that many times you’re not going to be on the winning side of anything,” Denis said.

Miscues also plagued the Otters in their loss to Windsor the week before, Denis said, but he is hopeful the 4-2 Otters, in fourth place in D-III, can bounce back when they host third-place Woodstock (5-1) at 1 p.m. on Saturday.

“We’ve got to get ready for Woodstock,” he said. “Physically, we can match up no problem with them. Their speed is what we’ve got to worry about.”

Regardless, Denis said, he pledged, “We’ll be ready for the playoffs.”

Stein said the Eagles were confident entering the game. He said they were healthy for the first time since the preseason and had prepared well.

“We had a good game plan coming in. The kids executed pretty well all week,” Stein said. “They’re our cross-town rival, so this win does feel good, but they’re a tough team.”

Stein acknowledged his team’s mistakes, but was pleased with the Eagles’ ability to make adjustments after making them and with their spirited play. He credited their hard-hitting with creating turnovers, and their positive attitudes in playing four good quarters.

“One thing we stress is let’s be positive, let’s have a good sideline, let’s keep each other going. And good hits, solid hits, turnovers, that’s all stuff that brings energy to the sideline, and it worked out well for us,” he said.

“Building from this one and moving on next week to Milton, and who knows?” he said. “This was a big win.”