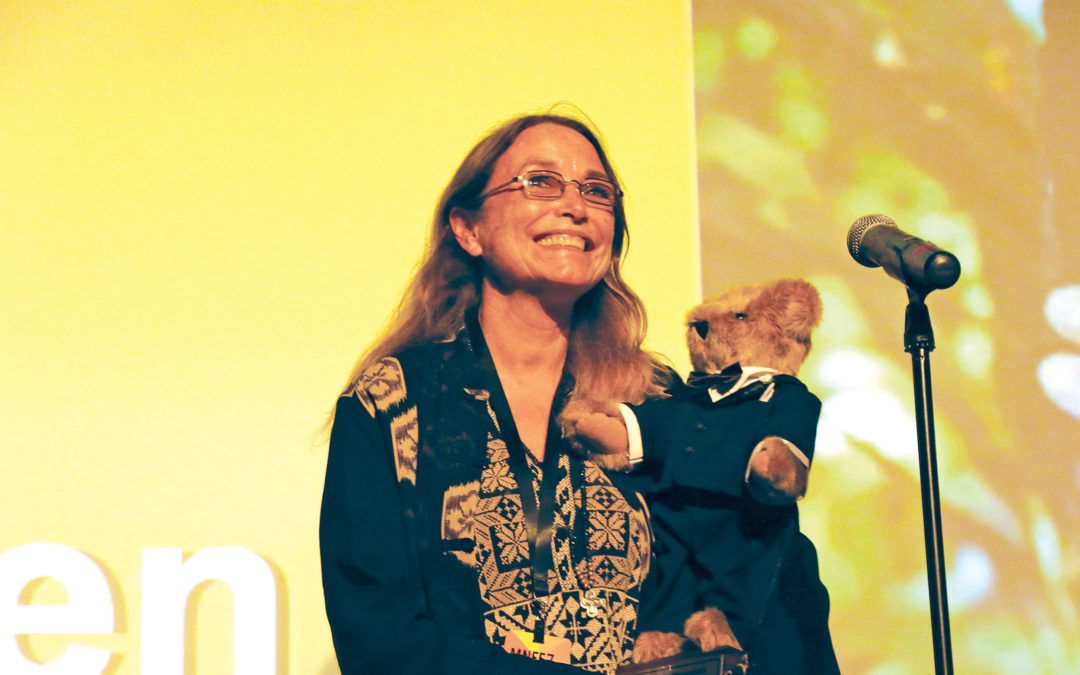 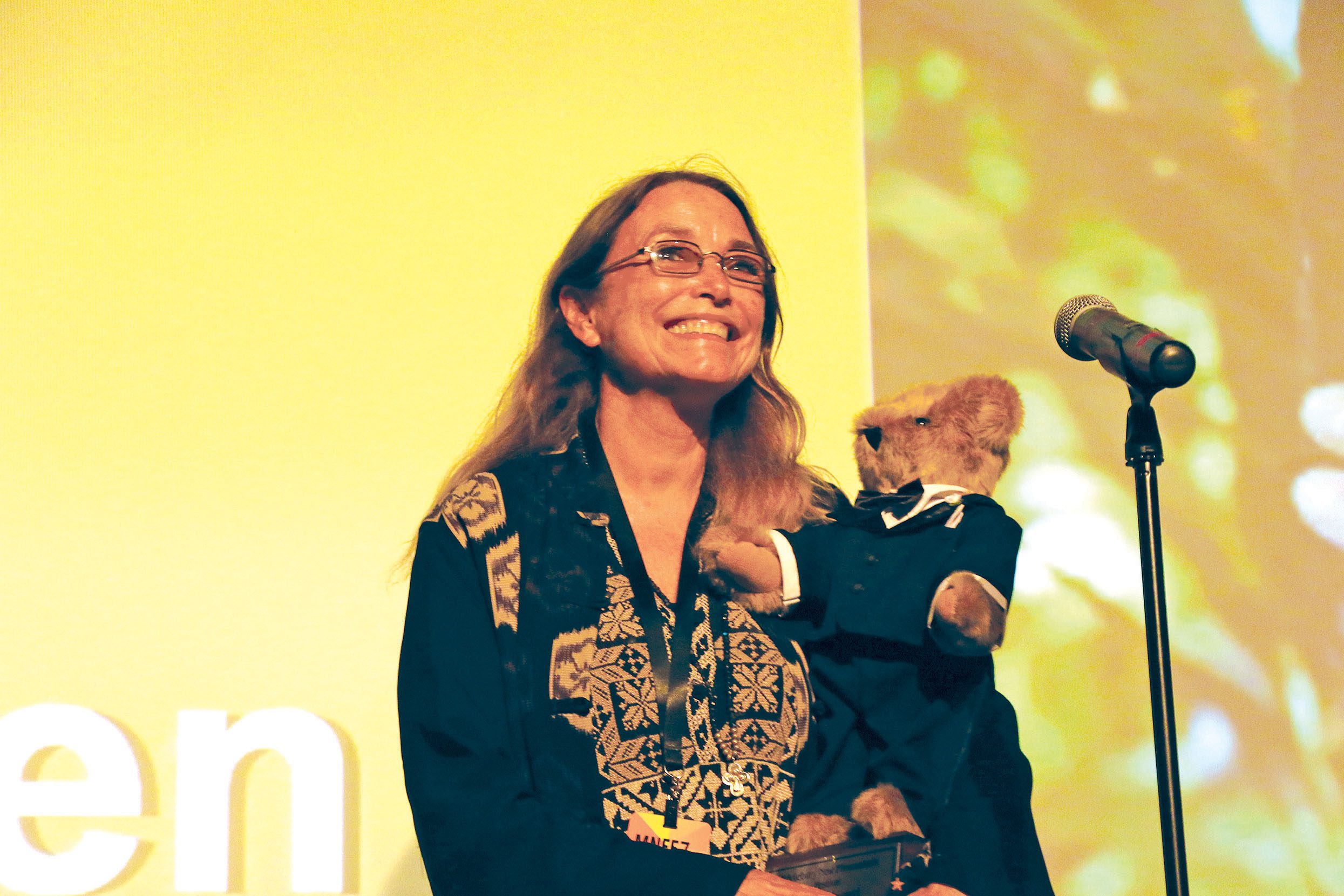 ACCLAIMED ACTOR KAREN ALLEN acknowledges applause and holds a VTeddy Award on the closing night of the Middlebury New Filmmakers Festival, which wrapped up after a successful five-day run. Independent photo/Steve James

Underneath it all, (filmmakers) just wanted to show their films to audiences … I had forgotten over two years just how important it is to filmmakers to be able to connect with audiences, and one another.
— Lloyd Komesar

MIDDLEBURY — Organizers of the seventh annual Middlebury New Filmmakers Festival, dubbed MNFF7, estimated around 600 people took in one or more of the 120 films screened at four venues in the county’s shire town Aug. 25-29. And viewers obligingly adhered to mandatory proof-of-vaccination and other safety protocols in exchange for a first-rate, in-person movie experience.

Festival Producer Lloyd Komesar and Artistic Director Jay Craven knew they could offer a great lineup of films, but were unsure how many eyes they would draw to the screens. After all, this was the first in-person MNFF since 2019; last year’s festival was offered virtually, due to the COVID-19 pandemic.

Turns out there was no need to worry. Film enthusiasts eagerly snapped up seats, with some movies drawing 80-plus spectators, according to Komesar and Craven.

“(The COVID safety protocols) made them feel more comfortable being there, and I think they liked the fact we got out in front of it,” Craven said during an interview on Tuesday. “It resulted in audience size that was greater than expected. I think the festival took hold. There was a lovely energy and enthusiasm and engagement that we associate with previous festivals. The fact the festival was done this year under these conditions, I think, made it especially memorable and effective.”

One of the most popular films in MNFF had a strong local angle. “The Price of Safety” — which explores national conversations of over-policing and racial bias as they unfolded in the city of Vergennes — drew such a big audience that some folks had to be turned away, according to Komesar.

The Karen Allen appearance at “Raiders” also packed them in.

Craven and Komesar were pleased with the overall quality of films in MNFF7. Many of them celebrated a common theme of “connectedness,” such as the ability of small community newspapers to bring people together (as seen in “Storm Lake”), and in “Just Being Here,” about an older man in Ripton making profound connections with the natural world as he withdraws from the human world.

This year’s festival also showed people are willing to attend a movie at 9 a.m.

“It gave us a chance to expand the touch-points of our festival by going early,” Komesar said of the early screenings. “It’s a town that’s early rising enough that people said, ‘You know what? Let’s go check it out.’”

And the filmmakers were grateful to see people filling theater seats; they can’t get the same thrill from the thought of people watching their creations online.

“For filmmakers to come all this way and go to a screening where there are maybe more than 100 people (watching their film), it’s a big deal,” Komesar said. “Underneath it all, they just wanted to show their films to audiences, and be able to have that kind of networking, communication and feedback. I had forgotten over two years just how important it is to filmmakers to be able to connect with audiences, and one another.”

Attendees apparently found all the local services they needed during MNFF7. There’d been some worry about that prior to the start of the festival. As recently reported by the Addison Independent, several area restaurants have in recent months had to cut their hours — or transition to takeout only — due to an employee shortage.

“We made every effort to feed the people,” Komesar said. “We had catered events virtually every day, except Sunday, with the idea we ought to offer to our attendees some way to get food if there were stresses on the local food ecosystem here — and there were.”

Craven believes the food service industry will come back in the same way the in-theater experience is.

“There’s no question that part of the impetus for the festival is to connect with the surrounding business community — especially restaurants in Middlebury,” Craven said. “We were thrilled to have the options we did so that everyone could get a good dinner. But it would be great to see even more restaurants flourishing next year.”

Komesar was pleased to report the pandemic didn’t put a crimp on volunteerism at MNFF this year. He credited festival Coordinator Jordan Mitchell with skillfully recruiting local families to lodge visiting filmmakers, as well as ushers to help out at the screening venues.

“We were perfectly staffed,” Komesar said. “In a way, having audiences that weren’t the size of 2019 afforded our volunteers a way to manage the crowds better. I’d like to see us get back to those attendance levels — perhaps in 2022 — but this year proved to be a good match between our volunteers and the size of the audiences we had.”

At this point, there are no plans to offer any MNFF7 films virtually.

“We may do it, but if we did, it would be a quite limited selection of films that would go up,” Komesar said.

“Online, for us, is secondary,” he said. “The popularity of the online screenings just doesn’t compare to the live event.”

MNFF7, according to Komesar, has created a template to build MNFF8, which will be Aug. 24-28, 2022. So MNFF8 will last five days, feature four screening blocks, maintain an outdoor venue, and include 9 a.m. screening times.

“The outlook is good for a robust MNFF8,” Komesar said.

Spectators ages 12 and older must be vaccinated; children younger than 12 must wear a mask. Check middfilmfest.org for ticket prices and the potential for additional films to be added to the Selects series. You can also subscribe to the MNFF newsletter.

•  Best Narrative Short Award: “The Other Side.” Director: Josh Leong.

•  Clio Visualizing History Prize for the Advancement of Women in Film. “End of the Line: The Women of Standing Rock.” Director: Shannon Kring.