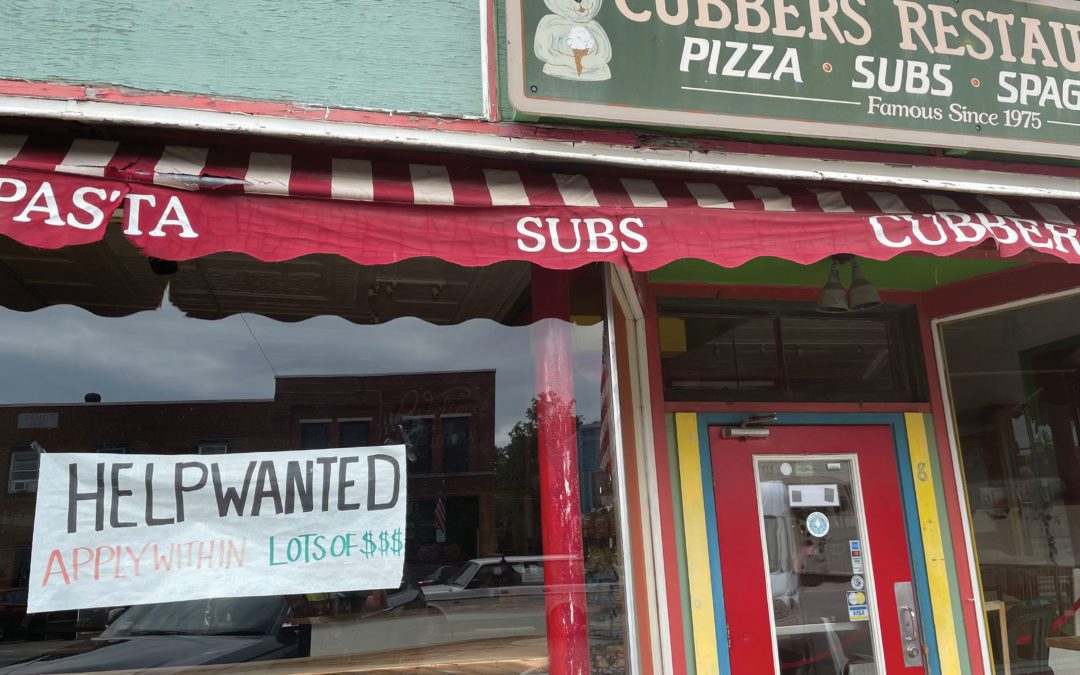 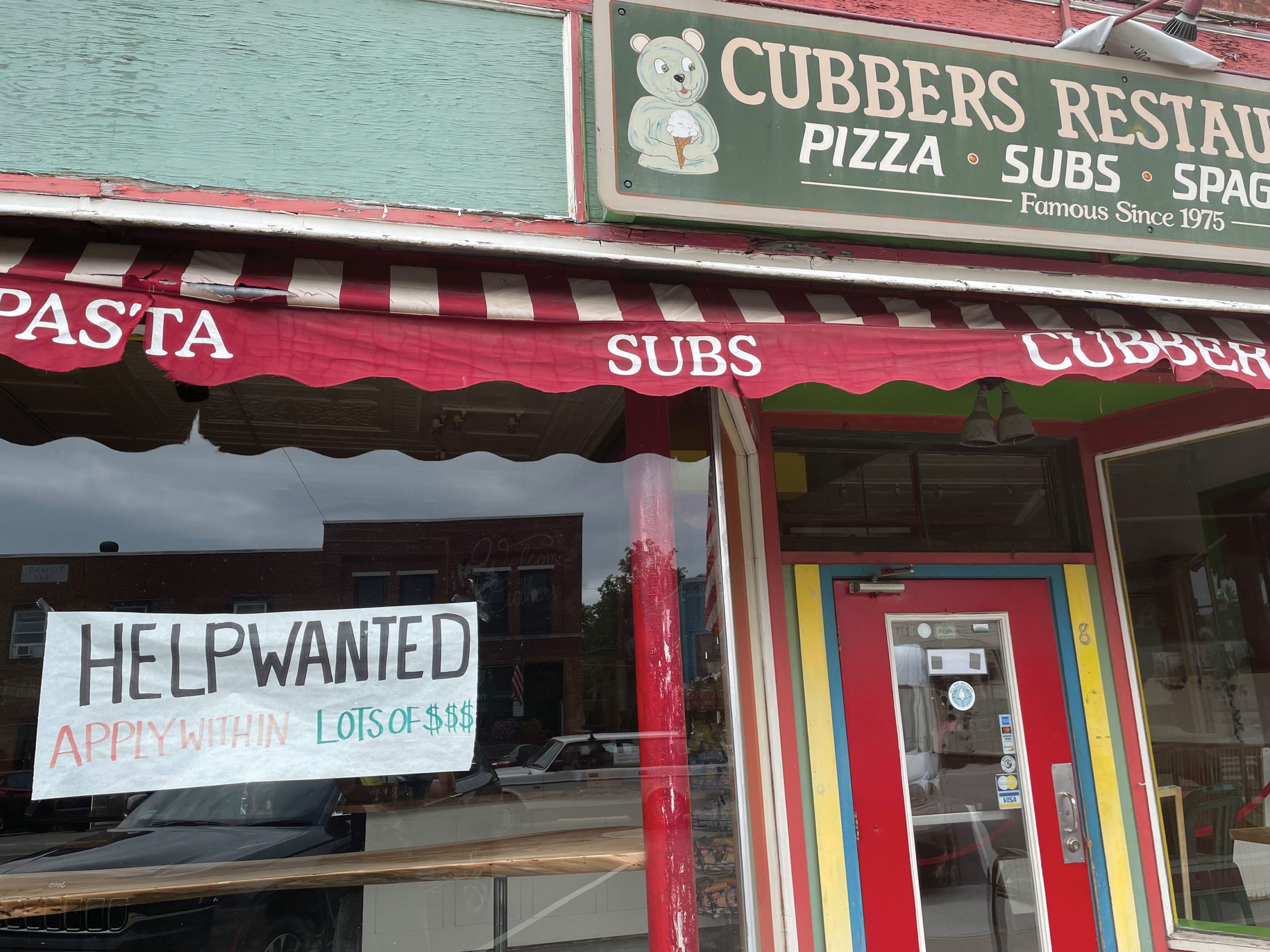 ADDISON COUNTY RESTAURANTS had to pare back operating hours in light of an ongoing shortage of workers, made worse by the return of summer workers to schools and colleges. Cubber’s Restaurant in Bristol posted this sign in an attempt to woo job applicants. Independent photo/John Flowers

“The availability of people with culinary experience in town — there’s nobody … It’s hard to build a team with people who are all in need of ground-up training.”
— Matt Corrente of The Arcadian

MIDDLEBURY — An ongoing labor shortage is forcing an increasing number of area food-service businesses to either reduce their operating hours, transition to takeout only, or temporarily replace some of their in-house hours with a food truck option requiring less staff to manage.

In related news, Middlebury College and Better Middlebury Partnership officials are organizing a job fair that would pair college student workers with local businesses in dire need of employees. A specific date and time for the job fair had yet to be finalized as the Independent went to press on Wednesday, but it appeared it would be hosted by the college sometime late this month.

The worker shortage is a national problem, and has been exacerbated by the COVID-19 pandemic. The Independent reported this past March on the scope and impacts of the concerning trend, which is having a particularly profound effect on the food service industry.

Matt and Caroline Corrente were super-excited two years ago upon opening Haymaker Bun Co. and The Arcadian Restaurant in the former home of The Lobby Restaurant at 7 Bakery Lane in Middlebury. Both enterprises quickly gained a loyal following, and Haymaker continues to chug along with a small staff turning out tasty baked goods.

But The Arcadian, like virtually all Addison County restaurants these days, hasn’t been able to fill multiple job slots — particularly in the kitchen. This recently forced the Correntes to limit The Arcadian’s dinner service to Friday and Saturday nights.

Unfortunately, the situation has only grown worse during the past week with the impending departure of two key kitchen workers, and now the Correntes plan on closing The Arcadian on Sept. 24. Matt said they could reboot the operation if/when the employment situation gets better, but he’s preparing to move on.

“It’s the long-term effects of having the crew eroded a little bit at a time, with no reinforcements available,” Corrente said. “It’s been like building a house of cards in a hurricane.”

He stressed The Arcadian’s closure will in no way affect Haymaker.

Asked what he would do after Sept. 24, Corrente replied, “Potentially divest from cooking and get into something a little more nine-to-five-ish. See what it’s like to have Saturdays off for the first time in 20 years.”

He’s not bullish on a big turnaround in the employment market. He credited the college for supplying him with some solid food-service workers, but added “they’re mortar, and you can’t build a wall with just mortar; you need some bricks. And the availability of people with culinary experience in town — there’s nobody.

“It’s hard to build a team with people who are all in need of ground-up training,” Corrente concluded.

Jim Rubright has been running Middlebury Bagel & Deli for 42 years, and he’s never seen the local workforce as depleted as it is right now. The dearth of applicants has forced the business to close on Wednesdays and Sundays until further notice.

“This is the first time we’ve ever had to close like this for any length of time,” he said.

Middlebury Bagel got good reinforcements this summer, in the form of high school and college students looking for seasonal work. But those students are now returning to classes, and few applicants are stepping forward to fill the ranks.

“We just don’t have enough people to make sense of (opening Wednesdays and Sundays),” Rubright said.

This sadly comes at a time when Middlebury bagel is busy. But Rubright said he needs around seven staff to keep up with Sunday demand, and there just aren’t enough workers available.

Unlike some of his counterparts, Rubright believes the current worker shortage will be temporary. He noted various COVID-related unemployment benefits are slated to sunset next week, which could coax more people back into the workforce.

“We’ve had some pretty good inquiries during the past three days from some people who’d like to work,” Rubright said. “So we may have some people come on board, and if that happens, we’ll reopen on maybe one of those days — probably Sundays.”

Mark and Donna Perrin saw the dwindling workforce trend appear in early 2020, figured the pattern would continue long-term, and decided over a year ago to close their Green Peppers Restaurant dining room to become a strictly takeout operation.

It’s turned out to be a good move, according to Mark Perrin, who’s been able to pare his payroll while keeping a lean, motivated staff turning out the restaurant’s popular pizzas, pastas, salads and appetizers.

“We’ve really streamlined what we do,” Perrin said.

He has no plans right now to reopen the dining room at 10 Washington St. in Middlebury and believes Green Peppers is well-positioned to survive any future COVID-19 pandemic restrictions that might come along.

And reducing labor costs has allowed Perrin to hold the line on menu price increases.

More consumers seem content to dine at home, even with most COVID restrictions now lifted, according to Perrin.

“I think people’s dining habits are changing,” he said.

Noonie’s Deli owners Justin Wedge and Megan Oberly were operating with four staff on Monday: themselves and two other workers. That’s half the workforce Wedge would like to see operating the popular sandwich shop in Middlebury’s Marble Works complex.

The couple has set up around 40 applicant interviews during the past year, but only a few of them actually showed up, according to Wedge. And Noonie’s, he added, offers competitive wages and tips.

Wedge has actually offered an apron to a few qualified applicants the day of their interview so they could jump right into the sandwich-building fray.

Few have taken him up on it.

“Nobody wants to work” Wedge lamented.

So until Noonie’s attracts more staff, the restaurant will remain takeout only, with no delivery service. They don’t have the capacity to take orders over the phone.

“We need at least two more workers to turn on the phone,” Wedge said.

The eatery’s current operating hours, per its website, are 10 a.m. to 3 p.m., Monday through Friday.

Wedge and Oberly are finding some customers sharing in their frustration. They’ve seen more than a few patrons become impatient when they find they can’t dine in, or can’t get their food as quickly as they’d like.

Food-service businesses in Bristol and Vergennes are also contending with skeleton crews.

A sign posted in the Cubber’s Restaurant window reads, “Help wanted — apply within. Lots of $$$.”

Bristol Cliffs Café has a “help wanted” sign on its door.

In Vergennes, 3 Squares Café is closed on Mondays and Tuesdays “until further notice,” according to its website. Café owner Matt Birong has said he can’t hire enough staff to keep the sit-down restaurant open those two days. But he recently got permission from the Vergennes City Council to park a food truck adjacent to the city green, which would allow 3 Squares to serve food — with fewer workers — on Mondays and Tuesdays.

Middlebury College could provide part of the employment solution through the upcoming job fair. Middlebury enrollment for this fall is pegged at more than 2,800 students, an all-time record. The hope is some of them will be eager to join the local workforce on a part-time basis.

But it’s clear the college has employment challenges of its own; the institution’s human resources website this week lists 55 open staff positions, ranging from “shuttle driver” to “director of development.”

Ten of the college’s listed staff jobs relate to food service operations, which have been temporarily curtailed due to unfilled kitchen vacancies.

An Aug. 30 campus-wide memo from Dan Detora, the institution’s executive director of dining services, announced that:

•  Atwater Dining Hall will open on Sept. 13 for lunch and dinner Monday to Friday with no breakfast or weekend meals.

•  After Monday, Sep. 6, college dining options — including Proctor, Ross and Atwater and the Grille — will not be available to faculty, staff, or visitors until “we are able to hire additional staff,” Detora stated in his memo.

•  The Grille won’t be open for late-night operations until staffing levels increase. In the meantime, MiddExpress will be open later in the evening, according to Detora.

•  The college’s catering services will be limited to serving the campus on a first-come, first-served basis.

“Please be prepared to work with the Department of Event Management to re-envision your event to minimize impact to resources and work through space limitations,” Detora stated, while encouraging on-campus event planners to use outside caterers, if need be.