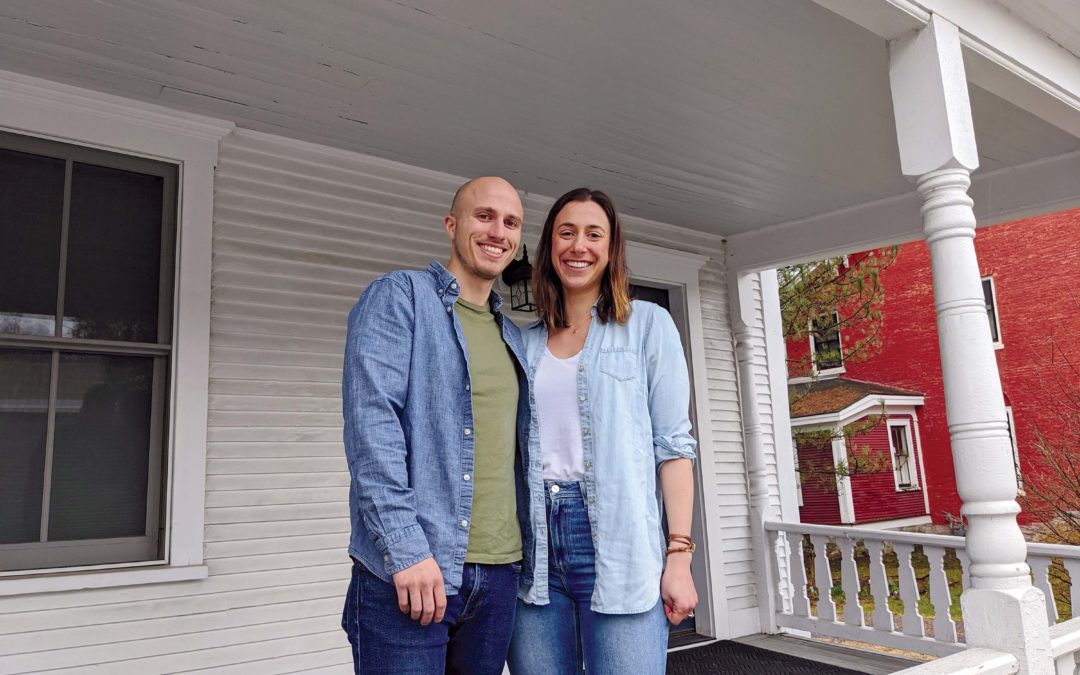 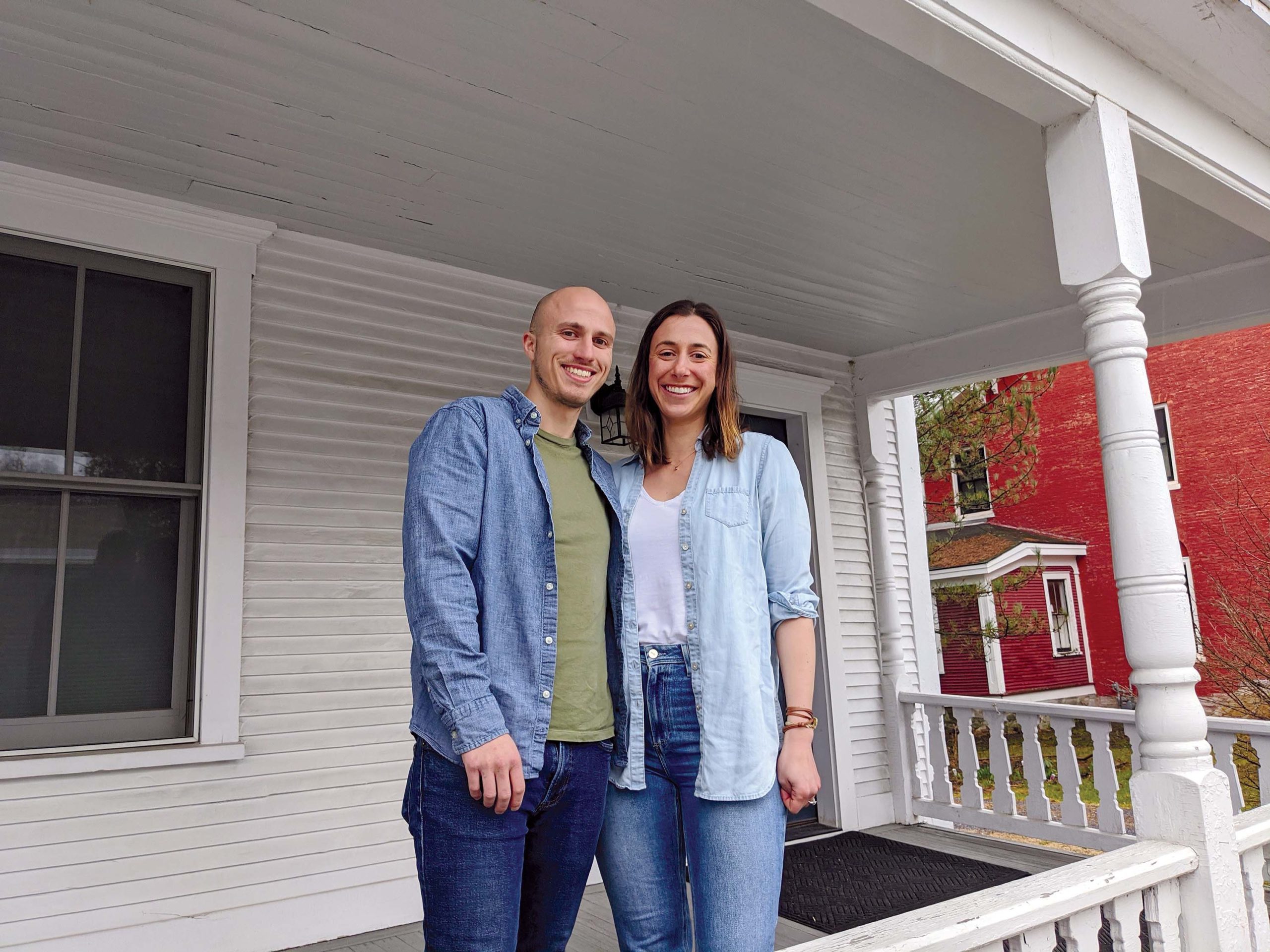 “The Price of Safety,” filmed, directed and produced by Vergennes residents Chris Spencer and Erin Wolcott, will screen during the Middlebury New Filmmakers Festival on Saturday, Aug. 28, 9 a.m., at the Middlebury Marquis. This feature-length documentary explores national conversations of over-policing and racial bias as they unfold in the quaint community of Vergennes. Photo by Chris Spencer

Sometimes you need to step back to see something clearly; or if your Vergennes filmmaker and photographer Chris Spencer, you use a drone. Flying high over the Little City, Spencer’s footage captures the picturesque falls, homes nestled snuggly on their quiet neighborhood streets, and traffic gliding through the city on Route 22A. The videography is perfect; too perfect.

When Spencer and his soon-to-be wife Erin Wolcott, an assistant professor of economics at Middlebury College, bought their house in Vergennes last year in April, Spencer was immediately interested in participating in City Council meetings as a citizen.

“Within the first couple of meetings there were a lot of contentions,” Spencer explained in an interview earlier this month. “There was a lot of drama going on… which brings us to July 16, when there was a special council meeting to discuss the mayor’s text messages.”

The special meeting Spencer is referring to had actually been warned to “allow the council and citizens to have a ‘Discussion regarding accusations that the Vergennes Police Department is demoralizing and intimidating people,’ and most of the 75 attendees who spoke backed a proposed citizen panel to work with the police department and City Manager Dan Hofman in an advisory capacity in overseeing police,” reported The Independent on July 17, 2020. Instead, the meeting focused on a text exchange between then Mayor Jeff Fritz and Hofman, which led to the resignation of the mayor in that same meeting.

“It was shocking,” Spencer remembered. “As a filmmaker I got curious.”

This curiosity sparked the beginning of Spencer and Wolcott’s feature-length film “The Price of Safety,” which will screen on Saturday, Aug. 28, in the Middlebury New Filmmakers Festival at 9 a.m. at the Marquis theater.

“Chris and Erin set out to make this film to understand why conversations about the police department are so polarizing and continue to get buried,” reads the couple’s artist statement. “‘The Price of Safety’ unpacks what happened in Vergennes in order to move the conversation forward. It raises awareness that even in a rural, perceived-to-be-safe state like Vermont, racial bias in policing is as pervasive as it is in more urban communities.”

“There is a big data piece to this film,” said Wolcott, citing the original 2017 study “Driving While Black and Brown in Vermont” by University of Vermont Professor of Economics Stephanie Seguino and Nancy Brooks, a visiting associate professor from Cornell University. “There was a lot of pushback to the analysis of the data, which has been recently updated… We heard people say, ‘This isn’t true, we have the best police department there is’… and that was discouraging.”

“The initial reaction was flat out denial,” Spencer echoed. “It felt like public officials didn’t want to talk about this openly.”

“We got to meet a lot of people in the community,” Wolcott said.

“I wanted to hear from people,” Spencer said. “This was their opportunity to speak, to contribute to the conversation… But yeah, we were also sort of poking a bear… People would ask us, ‘Why are you doing this? Why drum up the drama we’re trying to move past?’ There was this sense that because we were newcomers, we couldn’t have a voice until we’d lived here for a certain number of years.”

For Spencer, these hurdles were no match for the passion he was filled with after the murder of George Floyd.

“As a white person, that really shook me,” he said. “I didn’t have a good understanding of our systemic racism in this country… We need to do more; we need to speak up — and by ‘we’ I mean white people.”

“Because we are white, we don’t fear for our safety,” Wolcott added. “We feel safe to make a film like this, and so we need to.”

“We found so much polarization,” Spencer said. “You’re either a Black Lives Matter or a Support the Police supporter. Where’s the grey area? We need to start having open conversations, we need to have dialogue.”

This is Spencer and Wolcott’s first feature-length film, and their first film screened at the Middlebury New Filmmakers Festival.

“I felt the film was focused on a local story of considerable importance and that the festival should recognize its credibility as a documentary,” said Lloyd Komesar, producer of MNFF. “It is a well crafted film that gives full voice to the many sides of this controversy in Vergennes.”

“This year’s festival has several films and discussions that focus on the vitality of small towns,” added Jay Craven, the artistic director of MNFF. “Civic vitality and energetic journalism — change conversations and keep alive the possibility for people to think through — and even change their minds.  In today’s world, this connective tissue keeps our communities healthy — and whole.”

“It was our dream to get into the Middlebury New Filmmakers Festival,” Wolcott said, adding that the day it screens is also the 39th annual Vergennes Day celebration.

But it’s also the filmmakers’ dream that their community comes out to see the film.

“Our goal is to show it locally,” Spencer said, adding thanks to over 100 people who chipped in to raise $10,000 of the film’s $15,000 budget. “We want to continue to show this film around the state in particular. That’s our prime audience; we want this film to be accessible to our community.

“No, it’s not going to solve problems,” Spencer concluded. “We’re not prescribing a solution to get out of this. We’ll let viewers decide and hopefully continue this conversation.”

Tickets, festival passes and more can be found at middfilmfest.org.