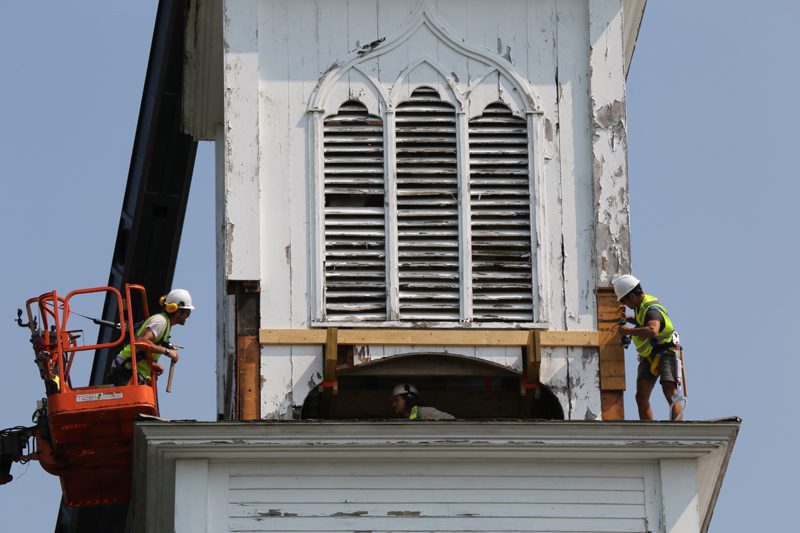 WORKMEN REMOVE PART of the steeple of the historic Union Meeting Hall in Ferrisburgh on Friday to restore some of the woodwork of the 181-year-old building. The restoration work is expected to be completed by Sept. 1. Independent photos/Steve James

“To ensure a beautiful historic building is saved (this work) is really, really important. They don’t build them like they used to.”
— Union Meeting Hall President Ashley LaFlam

FERRISBURGH — The dramatic Aug. 6 removal of the steeple from Ferrisburgh’s Route 7 Union Meeting Hall should be just the first step in a multi-year restoration of the historic 181-year-old town-owned building, according to those planning the work and town officials.

Friends of the Union Meeting Hall President Ashley LaFlam said fundraising for what is now estimated at a $585,000 project has gone well, and she hopes work in earnest can begin in 2022.

“I’m very confident with all the work we’ve done and all the irons in the fire that we have we can potentially be in a very good place by the end of the year,” LaFlam said. “We would love to see things happening in the spring.”

The town is footing the $70,000 bill for the steeple work, being performed by Ferrisburgh contractor Dan Cockerline. The selectboard approved that funding a couple of years ago.

Cockerline and the town’s selectboard’s Building and Maintenance Committee agreed structural repairs and cosmetic work to the steeple was best performed at surface level. Thus a crane gently hoisted the steeple off the building’s roof this past Friday, Aug. 6, and lowered it to the ground.

The plan is to return the steeple to its perch before Sept. 26, when the town will celebrate Ferrisburgh Day. Union Meeting Hall backers hope to host an open house that day, as well as offer tours and explain the potential benefits of a restored building to their fellow town residents.

In 1840 three congregations — Baptist, Congregational and Methodist — cooperated to build the Union Meeting Hall as a shared house of worship. Among other highlights in its history, in 1843 Frederick Douglass spoke in the building to further the cause of abolitionism.

“This building was so integral to the history of our town,” LaFlam said. “It’s served many purposes. First, to ensure a beautiful historic building is saved is really, really important. They don’t build them like they used to.”

She said in the future the building’s interior and its grassy, tree-dotted, 1.28-acre could host movies, plays, concerts, movies, yoga and educational classes, private events and more.

“Over the summer we were able to host food trucks, and that was really popular. And we’d love to do some more stuff. The green allows for flexibility of the space, and we would love to do outdoor plays, too, and offer a blend of programming that isn’t offered elsewhere,” LaFlam said.

The goal became more realistic earlier this summer when U.S. Sen. Patrick Leahy’s office announced it would include $250,000 for the Union Meeting Hall restoration in a federal Fiscal Year 2022 infrastructure bill.

That’s the same bill that included $3 million for improvements to the Vergennes sewer system at Sen. Leahy’s request. Both requests are considered likely, if not certain, to be fulfilled.

LaFlam acknowledged the probability of the funding.

“We are hopeful and optimistic,” she said, while adding, “with the government there is never a guarantee.”

The Friends of the Union Meeting House have other fundraising irons in the fire. Selectboard Chair Jessica James said board members were impressed by the group’s planning and fundraising presentation on Aug. 2.

“I would say it is going well,” James said.

The town does not have other money dedicated to the project, however, other than the $70,000 the board set aside for the steeple.

“We don’t have any specific funds allocated toward the Union Meeting Hall,” James said, except for routine annual maintenance funding.

The first priority for work to the building is to fix its sagging roof at a cost estimated at $125,000. Right now the interior is home to short-term structural scaffolding to buttress the roof. LaFlam said an evaluation discovered trusses had “failed in three different spots.”

Fortunately, the building’s foundation is sound, she said.

•  rebuilding the former exterior deck (which can serve as an outdoor stage) and entrance and improving nearby parking.

•  rebuilding the interior stage and making it ADA compliant.

LaFlam acknowledged estimates were tricky given the current construction climate.

“Obviously there’s a lot of work that needs to happen to this building, and we’re just working with the Building and Maintenance Committee for the town to try to get estimates for the scope of what it will really take to preserve this building,” she said.

LaFlam also sees another purpose to restoring the Union Meeting Hall. She said many residents travel out of Ferrisburgh for entertainment, and maybe more will look to their own community if expanded options are available.

“We would love to see our town center grow and flourish,” she said. “Hopefully this starts a ripple where more people want to come and invest in our town.”