Parents reflect on their motivations for having babies in this era 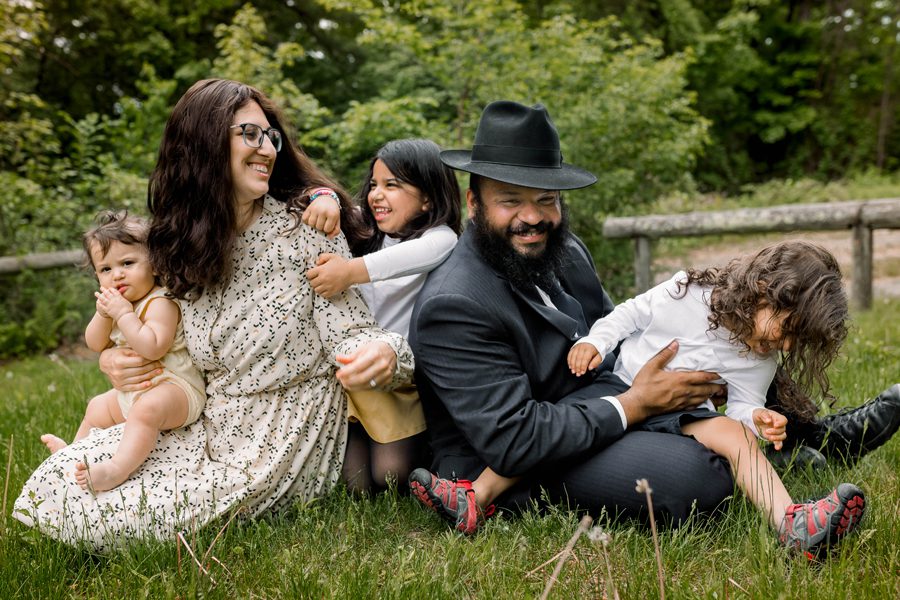 Parents reflect on their motivations for having babies in this era

Davida Murray, shown with her husband Binjamin and their children, (bottom to top) Shayna, Chaya and Chatche, knows that she and Binjamin will have a huge impact in forming who their children will be so they try to be good examples and teach good values.

ADDISON COUNTY — Samantha Ryan always knew she wanted to be a mother.

But when her son, Jamie, was three months old, the first COVID-19 cases started popping up in the U.S.

“It was the most terrifying thing ever,” Ryan said.

The Whiting resident had already struggled with the decision to bring a child into the world in its “current state” of ramping climate crisis and economic insecurity, but COVID topped them all.

But while the show stopped on so much of life in the past year, parenting went on as it always has and always will, regardless of the circumstances…or perhaps, because of them. The Independent asked parents what motivates and challenges them about having children in this time. Responses were as varied as faces, but one common thread shone through: kids can change the world.

“I have this huge hope that my kids will grow and change the world for the better,” Kaci Spear said. As a first grade teacher and the mother of a 3-year-old and six-month-old triplets, Spear said she loves kids.

Spear, of Ferrisburgh, said she and her partner were “wary” when considering bringing what they expected to be a single second child into the world. “We talked a lot about renewable energy sources…and just being prepared,” Spear said.

Ultimately though, “we knew having children would complete us and make our journey through life that much more enriching,” she said.

Ryan and her husband made a similar decision.

“Having a baby was an optimistic choice when optimism was hard to come by,” she said, adding that “with that optimism came a lot of fear and worry.”

“Being a new parent comes with a certain amount of anxiety regardless of circumstances,” Ryan said. Add to that an unpredictable virus, postpartum depression and isolation. “The combination of all of those things was honestly soul crushing and the scariest thing I have ever dealt with,” Ryan said.

As worried as she was, Ryan believes in the power of parenting.

“I was worried that my baby would be coming into a world that was full of hate and violence and difficult circumstances, but I also feel that young parents today have a strong responsibility to raise conscious children who can make this world better — and hopefully last longer — and I’m eager to take on that role,” she said.

Right now, Ryan is trying to juggle being a stay-at-home mom.

“I really want to go back to work, but I can’t because of a shortage of affordable childcare,” she said.

Rose Denis, a Brandon mother of a 13-year-old and stepmother of a 15-year-old, said the thing that scares her about parenting right now is the worry that “we will not prepare them for the real world enough to make it on their own — the economy has gotten so bad, and everything is so expensive,” she said.

Eli Madden, Middlebury father of a 10-year-old, on the other hand, “This is the best time to be alive in human history.”

Madden practices “Peaceful Parenting,” an approach based on attachment research and clear, loving communication. “I strongly believe that raising children without using fear and coercion is very important for building a more peaceful world…I treat my daughter like a fellow human being instead of an underling,” Madden said.

He added that it’s challenging and often not as culturally acceptable to be a good, present parent as a man.

Hopefully the next generation can shift gender norms, as well as an abundance of other issues.

“It is so important right now to teach this next generation to be the change. These poor kids are growing up in a world of intolerance, severe pollution/climate change, and to be blunt, laziness,” Spear said.

“We need to teach our children independence, resilience, hard work, tolerance, kindness and love,” she added.

“They impact the world and who they interact with,” the Middlebury mother said of her children, “so my husband and I need to make sure we are good examples and teach our kids important values, tools, and lessons which they can imbue in their lives beginning now until forever. That’s big stuff.”

Even though Murray said there’s little to nothing that doesn’t scare her about being a parent, she’s clear on what she wants for her kids.

“I just want (them) to have a good relationship with G-d and be healthy and happy people throughout their lives and spread love to other people while also respecting themselves and their own boundaries,” Murray said.

That may not always be easy — parenting never is — but the gifts kids bring to the world, even, and perhaps especially in this time, all come back to love.

“Parenting is the hardest, most tiring, most rewarding, and most painfully strong love you will ever feel,” Spear said.