Film Review: ‘Goodfellas’ the most entertaining mob movie ever 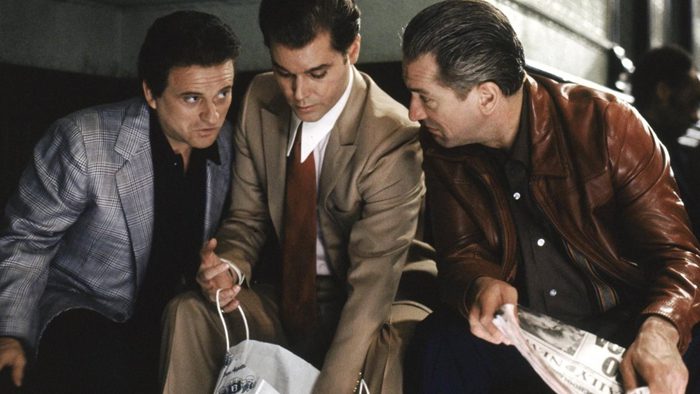 Film Review: ‘Goodfellas’ the most entertaining mob movie ever

It’s the anti-“Godfather” from frame one.

The credits rush by with the sound of a car zooming. Three men in a car cruise down an empty road in the heat of the night, the passengers fast asleep. The driver looks exhausted, a little sweaty, handsome but not silent-movie-actor-handsome in the vein of Al Pacino as Michael Corleone. Their suits are elegant, but they’re also crumpled, worn-down. Despite the late hour, the lighting is simple. It’s just a tad red, unlike the shadows that flood the screen at the beginning Coppola’s “The Godfather.”

Then there’s a “bump” from the car’s trunk. The two sleepers wake up, hearing the sound. They’re genuinely confused, briefly rambling guesses. Suddenly, they realize where the noise is coming from. They pull over into the wilderness. The driver opens the trunk while one of the passengers brandishes a knife. Over the next 30 seconds, things do not go well for the man in the trunk.

It’s one of the most brutal openings to any modern movie, and the ball just starts rolling from then on in “Goodfellas,” which was released in 1990.

On Aug. 5, “Goodfellas” capped the five-chapter Sunset Series at Swift House Inn/Summer of Scorsese, produced by the Middlebury New Filmmaker’s Festival. It was a great way to end the series, which deftly highlighted almost every genre Scorsese has worked in over the decades.

In fact, the only type of Scorsese movie really missing from the series was his religious films. But this may have been a blessing. Life is too short to re-watch “Kundun.”

“Goodfellas” recounts the story of Henry Hill (Ray Liotta), a gangster in a New York crime syndicate, and his friends Tommy DeVito (Joe Pesci, who won an Oscar for his psychopathic performance), Jimmy Conway (Robert De Niro, subtle/scary) and the mob’s leader, Big Paulie Cicero (Paul Sorvino, who steals every scene he’s in). Hill steals, dopes, philanders, cheats and lies over 30 years. Eventually, everything goes downhill for Henry. His drug habit worsens, which causes him to get arrested and eventually testify against the mob to secure a witness protection deal for him and his wife, Karen (Lorraine Bracco, incredible).

The dialogue fills “Goodfellas” with life in every scene. Consider some of the film’s golden lines. There is, of course, Joe Pesci asking Ray Liotta, “How am I funny?” in the movie’s most tense scene, most of which was improvised. “I’m gonna get the papers, get the papers,” earlier says the mafioso Jimmy Two Times, who says everything twice. “You insulted him a little bit,” Jimmy notes just before he murders a gangster with a big mouth.

And the pacing. Scorsese’s movie is more than two-and-a-half hours, but the rapid cutting and sheer zip of each scene make this crime epic go by in style. When you watch “The Godfather,” you feel as if you’re getting an understanding of the conventions, perhaps the traditions of the mob. “Goodfellas” does this, too. We learn how it is gangsters run up the credit of a mob-protected restaurant until it goes bankrupt, why “whacking” a “made guy” is really something you shouldn’t do, what to tell someone when they ask you about all of the cash lying around your house (You were playing craps in Vegas and got lucky).

But the film is more interested in how being a gangster feels: exciting, horrifying, hilarious and heartbreaking. How Liotta cackles as De Niro strangles a garrulous mob associate with a telephone cord is absolutely chilling in a way comparable to any of “The Godfather’s” darkest moments spoken in sotto voce.

Coppola’s film is about the rise of evil. Scorsese’s “Goodfellas” — despite its narrative flash, catchy music and riotously fun spirit — explores evil’s banality. Thirty-one years after release, it’s still the most entertaining mob movie ever made.