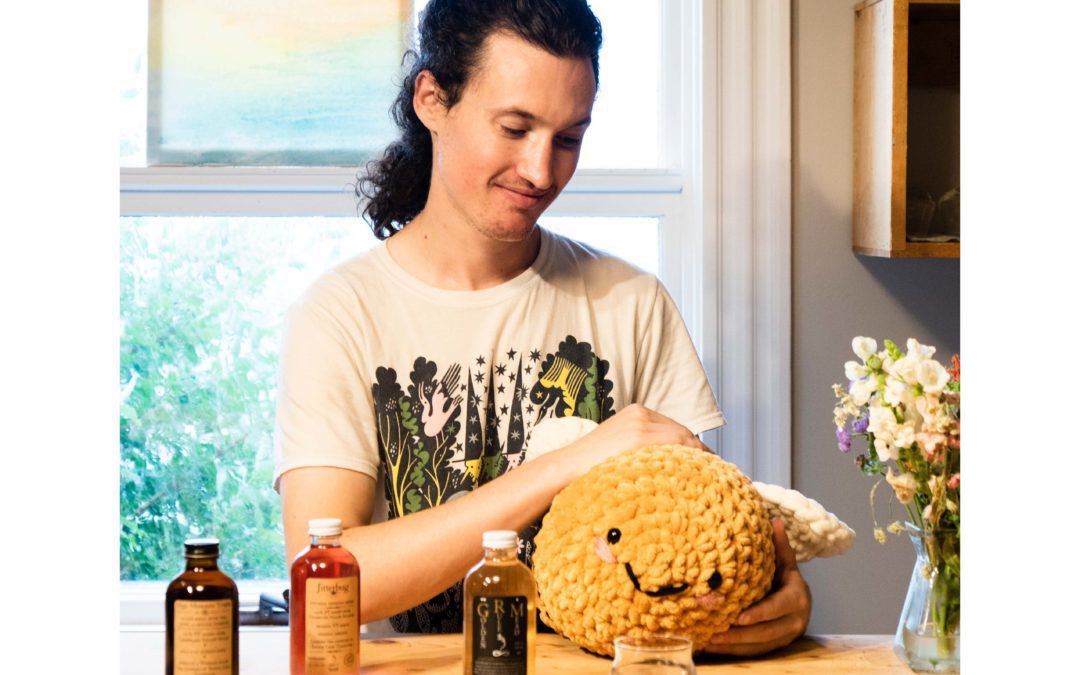 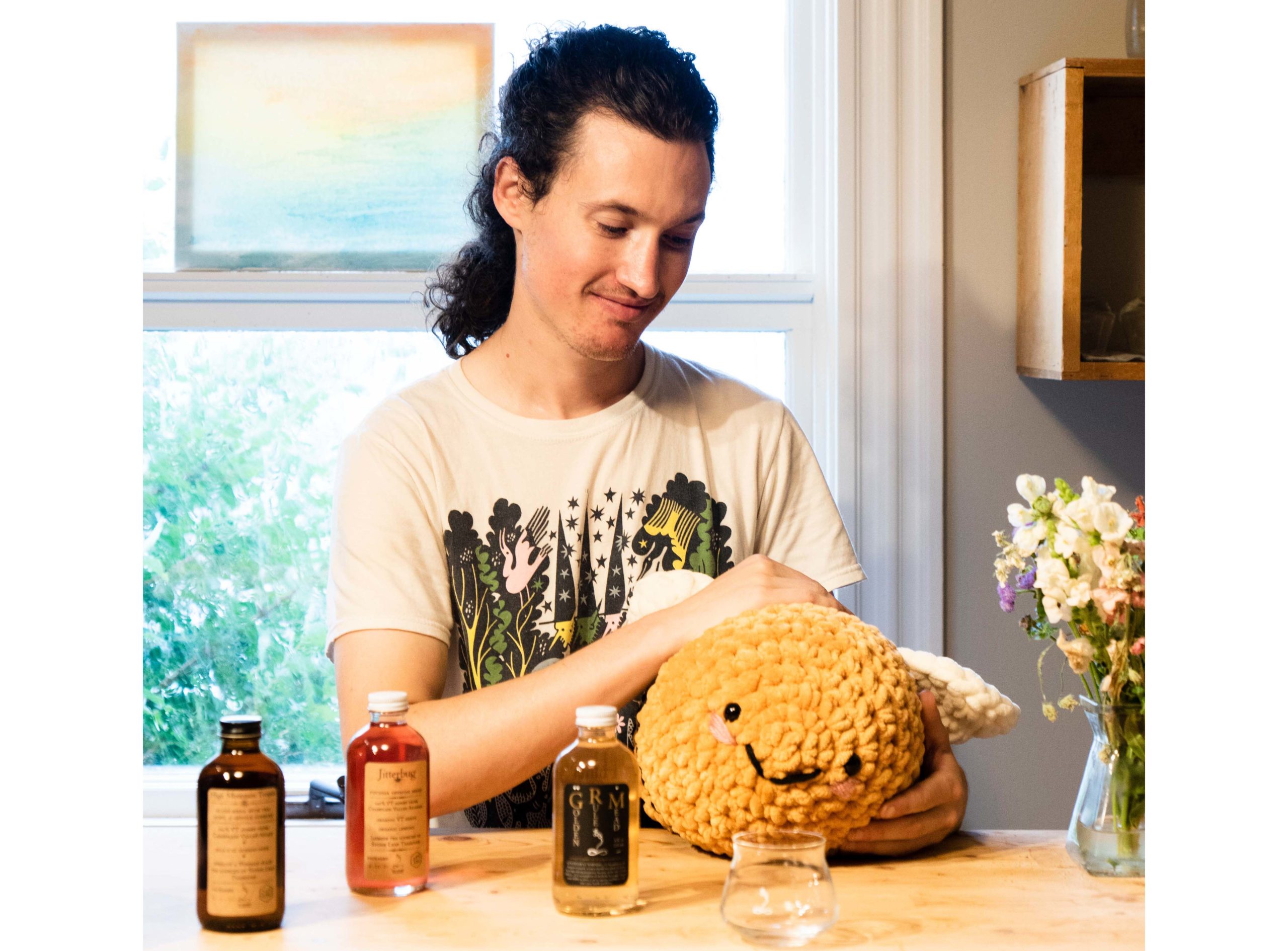 Brew for others as you would have others brew for you.
— Golden Rule epigram

MIDDLEBURY — Self-described fantasy geek Alexandre Apfel first encountered the word “mead” while reading “Beowulf.” Little did he know he would wind up opening the first mead café in Middlebury in April of 2020.

Golden Rule Mead, based in Apfel’s house on Elm Street, is set up with a furnished tasting room, a bar with mead on tap and a cellar where the fermented honey drink is brewed, in addition to Apfel’s personal living quarters.

But everything has not gone to plan.

When Apfel quit his job brewing beer at Fiddlehead Brewing Company in Shelburne in early 2020 to fully commit to his own mead craft, he was hoping to become Vermont’s draft mead brand. But two weeks after he moved into 8 Elm St. and before he had much of a chance to get his brews on tap, COVID-19 shut everything down. Apfel said he was forced to put his mead in bottles and sell them out the window of the café, as well as at several farmers markets, in order to pay the bills.

“It’s definitely been a lesson in flexibility,” Apfel said.

He added that he’s learned a lot from the bottling and selling process. Still, he was thrilled to open his tasting room this past April, though business has been slow.

On Friday, Saturday and now Sunday afternoons and into the evening, his living room transforms into a true mead café, boasting cozy couches, eclectic music in the background and elegant mead tasting flights priced at $3 and $5. The café also showcases artwork by local painter Alice Eckles.

Tastings include whatever meads Apfel has on tap, which range from the consistently available “Inspiration no. 3,” a bubbly mead brewed with tulsi, ginger root and orange and lemon zest, to the seasonal “Hilma,” also bubbly and wild-fermented with lavender, lemon balm and honey from Briar’s Patch Apiary. Apfel’s literary side comes through with “Jitterbug,” a fuchsia-tinted mead brewed with beets, lemons and jasmine tea and named for Tom Robbins’s fragrance-filled novel “Jitterbug Perfume.”

Most of the honey Apfel uses is sourced from Middlebury’s Champlain Valley Apiaries, and the tea that Apfel uses in several of his brews is supplied by Stone Leaf Teahouse.

“I would be a fool not to source my tea from Stone Leaf,” Apfel said. “I think it’s the best in the world.”

Apfel’s relationship with Stone Leaf is an example of how much he values working with local people, as well as local ingredients.

Staying local isn’t just about financial support though. “It’s about an awareness of what’s around you, about returning to the real, bodied world of this landscape,” he said.

Apfel, who has been exploring local alternatives to lemon, acknowledged that it’s not always convenient to prioritize the local and small-scale.

“I’m suspicious of convenience,” he said.

Perhaps as a result, Apfel, who grew up in Colorado, said he has spent his life living “in the open-ended.” He got into beer brewing through a series of serendipitous events that began with a post-college dishwashing job at Boulder Beer Company’s Brewpub and ended with brewing positions at Otter Creek Brewery and then Fiddlehead.

While working at Otter Creek, he began making mead as a less labor-intensive process with home brewing equipment and quickly became enamored with its subtlety.

Apfel said that mead — at its simplest an infusion of honey and water — is a great medium for playing with ingredients that he’s very interested in, but that don’t necessarily have a place in beer, such as tea.

“A dry-fermented mead is a nice showcase for other ingredients; it doesn’t leave a lot to hide behind,” Apfel said.

But making intricate meads, which takes time, equipment and care, is still easier than making a business of making meads, Apfel said.

“It’s not like I’m meeting a demand,” Apfel said, though he added that the hours of his mead café — 2-8 p.m. on Fridays and Sundays and noon-8 p.m. on Saturdays — could cater to some demand for nightlife.

But he hopes Middlebury folk will begin to get curious, particularly as COVID concerns ease. Apfel is planning to expand his menu with herbal teas and other non-alcoholic options and hopes to serve as a venue for live music and the occasional food truck.

“I just want people to enjoy it,” Apfel said, adding that “eight ounces is plenty of alcohol, you don’t need a pint!” His meads have a range of alcohol contents from 3.8% to 9.5%, but are meant to be savored.

Eventually, Apfel hopes to be able to hire someone. He’d also love to have a larger, multi-purpose space, which he imagines could house a yoga/dance studio or be a shared artists’ hub. This would fill out his mission — the name of the café. Apfel’s play on the Golden Rule, “Brew for others as you would have others brew for you,” is reflexive and collaborative, he said.

“It asks what you want, and it’s all about relationship.”

This principle guides Apfel’s work, and he hopes it can provide a little inspiration to folks “who feel the need to do things a little differently.”

Sometimes Apfel wonders if he struck out too early, or whether he’s doing the right thing at all.

“As a kid I wanted to be the adventurer, not the innkeep,” he said. “As I’ve gotten older, I’ve realized the innkeep is a central part of any good story. They know what’s going on, they’re a hub. That’s what I’d love to become for this community, and well, that’s its own adventure.”