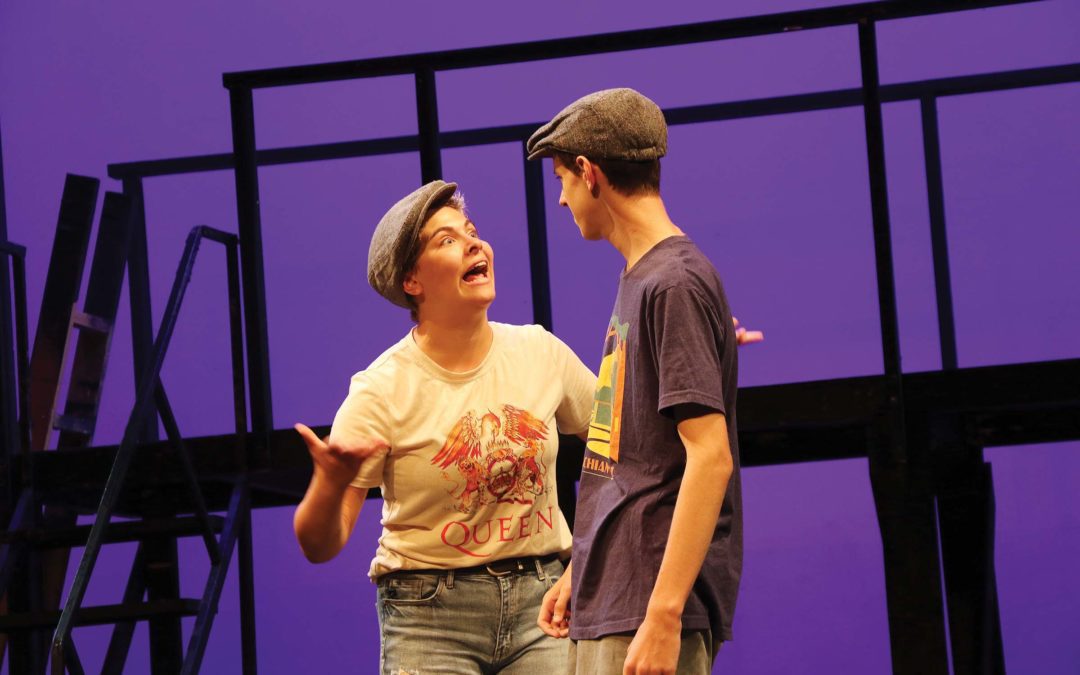 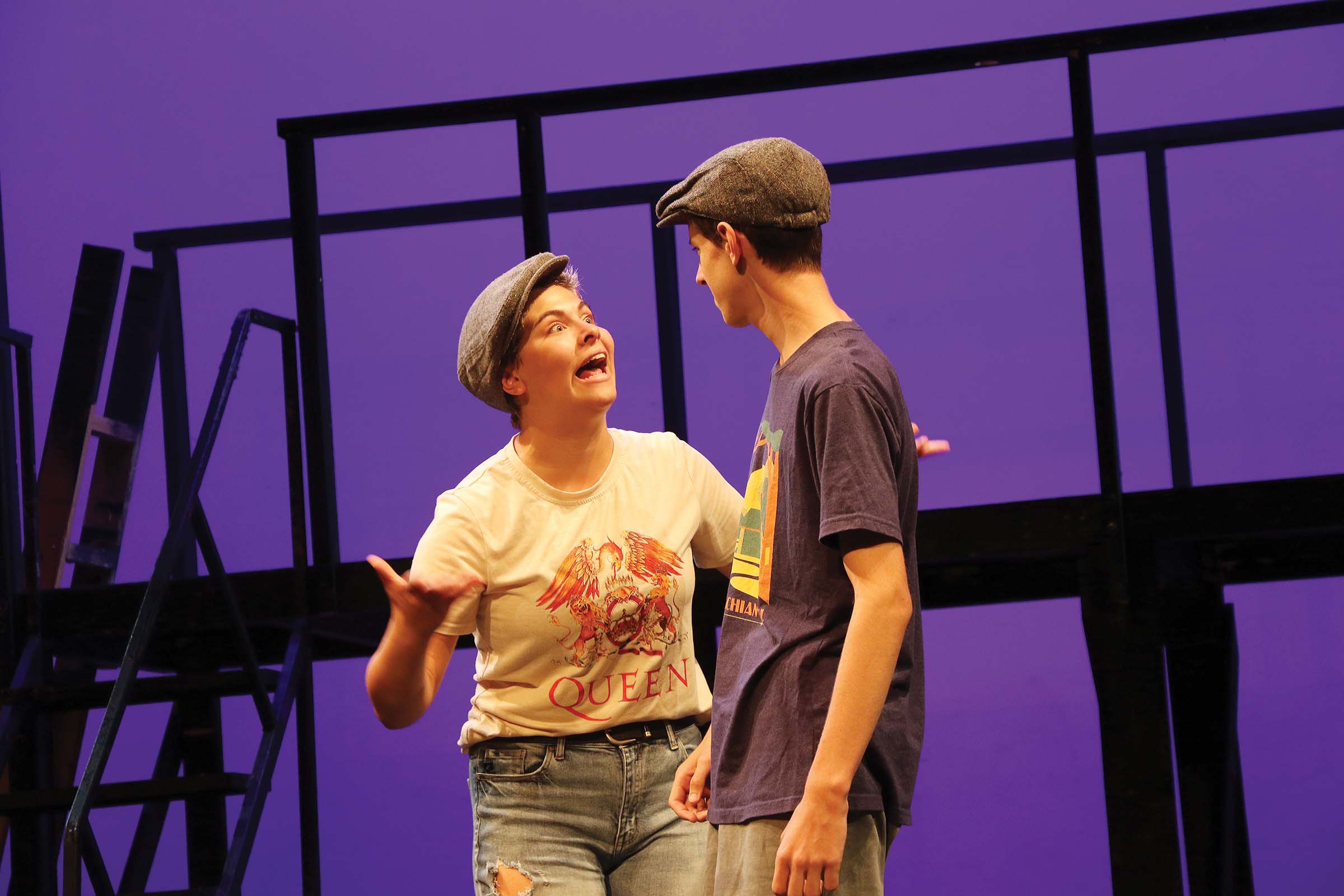 Back in the late 1800s, newsboys were on every street corner in New York. Poor, often homeless and shoeless, their cries of “Extra! Read all about it!” could be heard throughout the city.

But when publishers Pulitzer and Hearst demanded a bigger cut of the newsies’ income, the kids did something extraordinary: they organized and went on strike. It was a bunch of unruly kids against two of the richest men in America.

And the newsies won.

This story has been turned into a hit Broadway musical, which will be presented by Town Hall Theater’s Young Company on July 23 and 24.

“It’s the perfect musical for a young cast,” said director Douglas Anderson, who has been working with the cast of 15 (plus 10 staff/crew members) since July 6. “In the first place, the characters are kids — pretty much the same age as our cast. And the story, about standing up to injustice, is a very appropriate lesson for young performers.”

Anderson notes that it’s also a very entertaining show. “The music and lyrics are thrilling, and our young actors are having a field day with the big dance numbers, which have been choreographed by Broadway dancer Elisa van Duyne.”

Although this is the fourth production van Duyne has been involved with at Town Hall Theater, including “Much Ado About Nothing…at Dinner,” “Hands on A Hard Body,” and “Ada and The Engine,” this is her first time working with the Young Company.

“They are so full of energy and joy,” van Duyne commented. “It’s a pleasure to shape that charisma into explosive musical numbers, using choreography and physicality that pays homage to the grit of the original newsboys, as well as the athleticism of the Broadway production. This is definitely a musical that the whole family will enjoy.”

Lily James, 16, from Monkton stars as Jack Kelly, the leader of the Newsies revolt.

“It’s exhilarating,” James said of her character. “Jack is such an energetic leader to the rest of the Newsies. It’s really fun getting to play someone that has that kind of leadership role — really fulfilling.

“This story is extremely relevant,” added James, who is an activist off the stage too. “These kids are taking up the decision to make change — realizing they need to be the people to stand up and demand change for the world they’re inheriting… Jack is demanding a place at the table, telling adults they need to listen to what the youth are saying.”

James has been acting since she was six or seven years old. Her first performance with Town Hall Theater was in 2019 when she played Paulette the hairdresser in “Legally Blonde.”

“It’s my second performance with Doug,” James said. “It’s a pleasure to work with him… He creates a really fantastic working space that is just fun.”

James, who said she’s the first musician in her family, also works with “Ms. EVD” (Elisa van Duyne) as a student at the Vermont Musical Theater Academy and takes voice lessons with musical director Jen Allred.

“All the adults treat us kid-actors like we’re professionals,” said James, a rising junior at Mount Abe Union High School. “We might be kids, but everyone is putting their absolute best into producing a show we can be proud of.”

And James, is shooting for the stars.

“I’m going places,” she said. “You might find me one day directing in Hollywood or singing on Broadway… One way or another, I’ll be involved in as many creative communities as I can be, and trying to get to the very top of what I can do.”

Anderson is always amazed by the progress some teens make in the three weeks of the musicals camp.

“There’s a great deal of nervousness and timidity on the first day of the session,” he said. “You can’t hear them when you’re sitting next to them, much less at the back of theater. But musical comedy energy is somehow contagious, and after three weeks you see them playing with real confidence and pizzazz.  They really come out of their shell.”

A July production featuring teenagers is now a tradition at Town Hall Theater.

“At first we thought, well, parents will attend,” Anderson said, “but the audience keeps growing, because the shows have been exceptionally entertaining. ‘Legally Blonde’ (2019) and ‘The Lion King’ (2018) played to sold-out houses.”

“The magic is back — live at THT!” exclaimed Lisa Mitchel, Executive Director of Middlebury theater. “The theater is bustling with a talented cast of teens who are overjoyed to work with director Doug Anderson, choreographer Elisa Van Duyne, and musical director Jen Allred. We are thrilled to welcome theater goers back for a high-energy production of ‘Newsies.’”