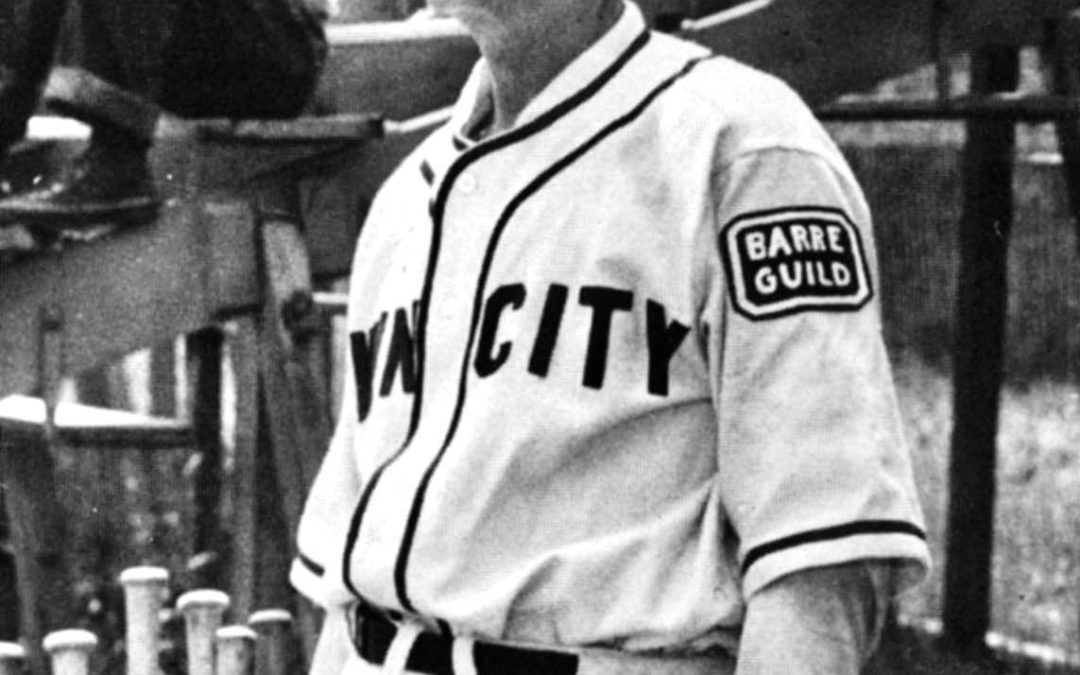 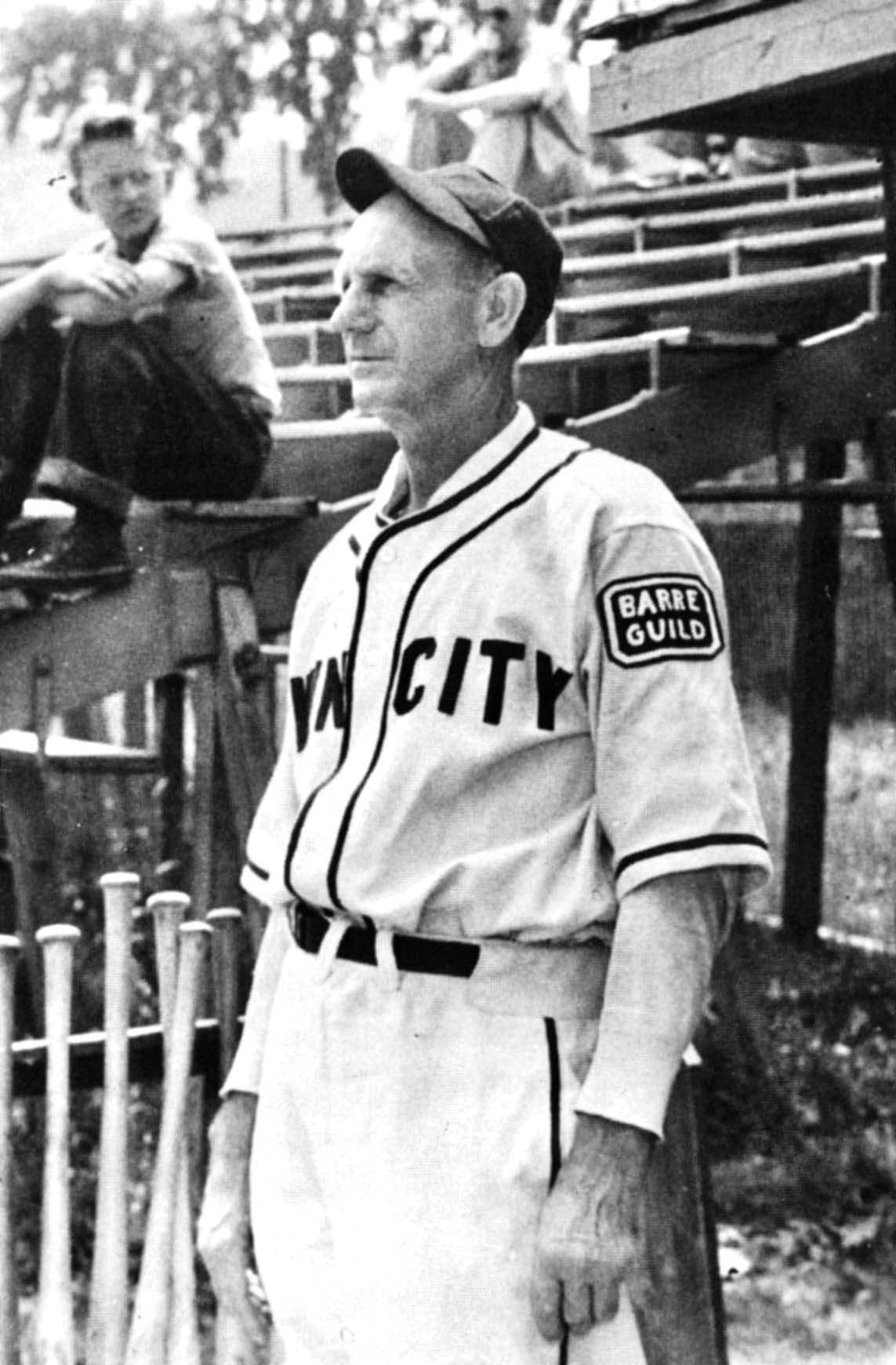 RAY FISHER WAS manager in Vermont’s Northern League for Burlington in 1937 and Montpelier-Barre in 1946 and from 1948-50. A Middlebury native and graduate of Middlebury High School and Middlebury College, Fisher pitched in the Major Leagues from 1910-1920 and coached baseball at the University of Michigan for 38 years. He returned to Vermont each summer to his family camp on Lake Champlain in Ferrisburgh.

In the last game of his sophomore year at Michigan State in 1946, Robin Roberts lost 2-0 to archrival Michigan, coached by a 58-year-old Ray Fisher.

At game’s end, Fisher asked the Michigan State ace if he would like to play summer ball in Vermont. After a four-year wartime hiatus, the Northern League, a fast independent league in Vermont and New York, was reviving and seeking fresh talent from the collegiate ranks. Fisher was coaching the Montpelier-Barre entry. Roberts immediately agreed, and thus began a productive and warm mentor-player relationship.

Roberts was 11-8 that first summer (“to say the least, I was erratic,” he wrote in his autobiography) and then the next summer was nearly unhittable, 18-3 with 2.33 earned run average, winning his first 17 starts. At the end of that summer, Roberts signed with the Philadelphia Phillies and went on to a Hall of Fame career in 19 Major League seasons, winning nearly 300 games.

“I had a phenomenal time pitching for the Twin City Trojans,” Roberts wrote. “I was paid $175 a month for expenses and all we did was play baseball, from June 15 to Labor Day, 60 games total. Ray taught me everything.”

Fisher was a Vermonter, from Middlebury, and attended both Middlebury High School and Middlebury College (class of 1910). He was in the 27th year of his storied career at Michigan in the summer of 1947. Before agreeing to coach at Michigan, Fisher pitched in the Major Leagues for 10 years, winning an even 100 games for New York (AL) and Cincinnati (NL).

Ray Fisher was Michigan’s baseball coach for 38 years, winning 662 games against 292 losses. He won the Big Ten title 14 times, and the national championship in 1953. He may not be in the Baseball Hall of Fame in Cooperstown, but he is in five others, including the Middlebury College Athletics Hall of Fame, inducted in its inaugural class of 2014.

Fisher returned in the summers from Ann Arbor to the family camp on Lake Champlain in Ferrisburgh. He was a guiding force and powerful presence in the Northern League, managing Burlington in 1937 and Montpelier-Barre in 1939 and from 1946-50. His Twin City team finished first or second in each of his five seasons at the helm in the post-war years.

The Northern League in Vermont was an outgrowth of a league across Lake Champlain in New York where teams from resort towns played baseball for the amusement of summer guests. In the league’s first year, 1936, the Burlington Cardinals was the only Vermont team, taking the steamer Ticonderoga across the lake to play in Plattsburgh, Tupper Lake, Saranac Lake, Lyon Mountain, and Malone. The next year, the Montpelier Senators and St. Albans Lions entered the league and the Rutland Royals the year after that.

In its incarnation after the war, 1946-50 and ’52, the Northern League had a distinctive Vermont identity with seven teams from Vermont (Brattleboro, Bennington, and St. Johnsbury also fielding teams) and one from New Hampshire, the Keene Blue Jays. In all, over 50 players from the Northern League played in the Majors.

In the pre-war years, the Burlington Cardinals, under Manager Vin Clancy, reigned, finishing first for three consecutive years, ’38-’40. The Cardinals played their games in capacious Centennial Field and drew large crowds, leading the league in attendance. Though finishing fifth that first year, 1937, they drew over 38,000 fans to Centennial. The next year, 4,300 fans packed Centennial to watch a playoff game between the Cardinals and the Plattsburgh Majors.

In his excellent history of Centennial Field, Dominick Denaro described Clancy as “the Leo Durocher of the Northern League, a brilliant manager and irrepressible showman with a flamboyant and combative style.”

Some of the distinctive talents from this prewar phase were Snuffy Stirnweiss (St. Albans), 1945 batting champ for the Yankees; Hank Borowy (Saranac Lake), 20 game winner for the Cubs; Dave “Boo” Ferris (Brattleboro), twice a 20 game winner for the Red Sox; Vic Raschi (St. Albans), the ace on some great Yankee teams; and Chuck Connors (Bennington) who played baseball for the Dodgers and basketball for the Celtics, but was most famous for playing “The Rifleman” on TV.

After the war years, Ray Fisher’s Twin City team dominated the league, finishing first or second from 1946-50. While Vin Clancy was gone, off to work for J. Edgar Hoover’s G-Men, Fisher was every bit as tempestuous as Clancy. Robin Roberts described him as “a hard loser, tough as nails (who) would really get on umpires. He was a good coach who didn’t confuse things, a phenomenal guy.”

Not as strong a league as in the prewar era, the postwar teams still sent some terrific young players off to Major League success: in addition to Roberts, Chuck Stobbs (Brattleboro) pitched in the Majors for 15 years; Johnny Antonelli (Rutland) won 20 games twice for the Giants; Billy Loes (St. Albans) won 80 games in the big leagues, mostly for the great Dodger teams of the ’50s; Ted Lepcio (St. Albans) played seven years for the Red Sox after his time in the Northern League; Burlington had both Johnny Podres, Dodger World Series star, and Yankee stalwart Johnny Kucks on their club in 1950.

When the NCAA tightened its eligibility rules in 1946 and the ECAC voted in March of ’48 to bar its students from participating in leagues with any professional players, “overnight the league lost 80% of its players already under contract.” By 1950, all teams were losing money and the handwriting was on the wall for the “Summer League with the College Atmosphere,” as the Northern League described itself.

Well, my friends, that fascinating enterprise from 1901-07, with teams primarily from Burlington, Rutland, Montpelier-Barre, and Plattsburgh, is quite a story — and I’ve told pieces of it in this space from time to time. It boasted over 100 future or former Major Leaguers and in 1905 had a Black player, William Clarence Matthews, who many regarded as the best college player in the country.

But that story will have to wait for another day, unless of course, you want to have a drink or a bite to eat with me some time to talk about it. Be forewarned, I might ramble on past your bedtime.

Karl Lindholm is Emeritus Dean of Advising/Assistant Professor American Studies at Middlebury College. He can be contacted at lindholm@middlebury.edu.