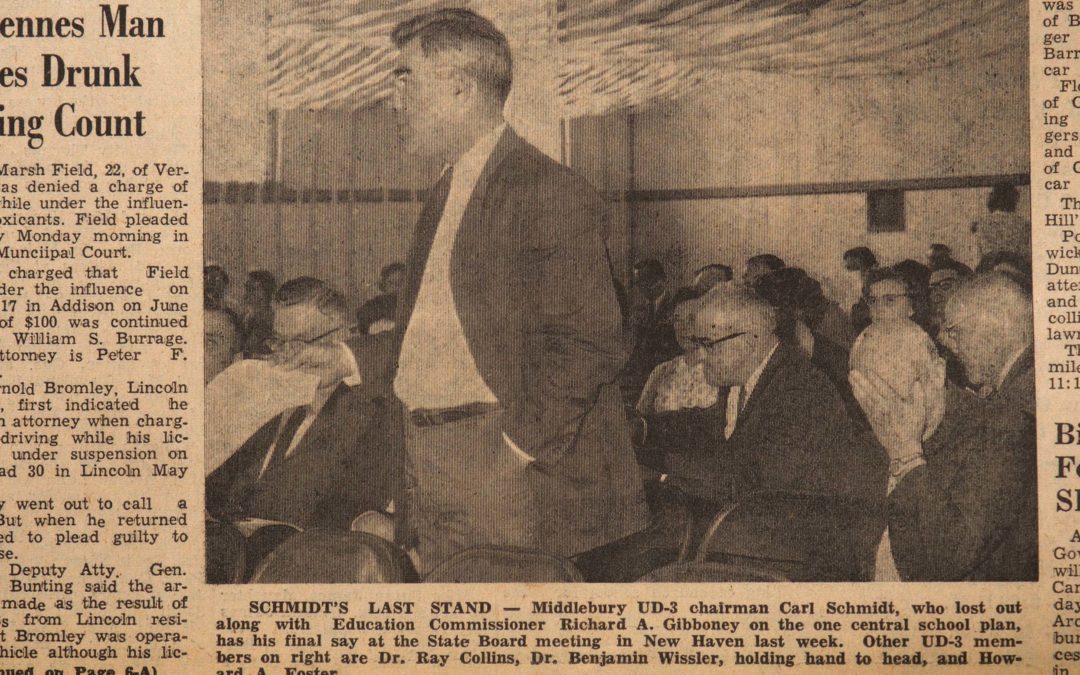 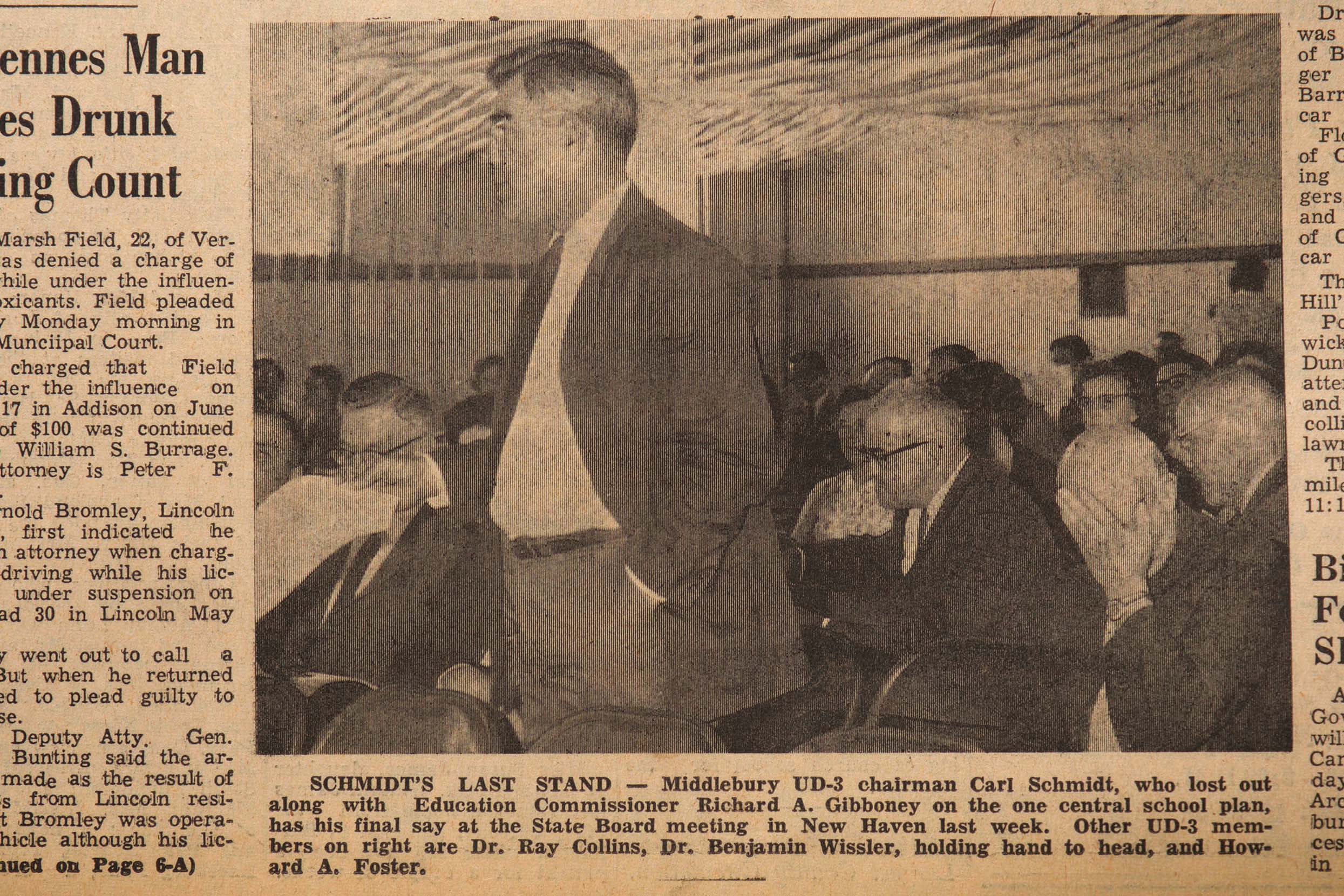 MUHS BOARD CHAIR Carl Schmidt speaks at a State Board of Education meeting in New Haven in 1966. He suggested the idea of a single high school to serve all of Addison County.

Where is the local autonomy when six votes in another town can dynamite the wishes of four towns to form a union?
— Education Commissioner Richard Gibboney

Editor’s note: This is the second story in a series about the growing pains of Addison County schools in 1965-66 and the Vermont Commissioner of Education’s ambitious plan to address them. Unless otherwise noted, quoted material is reproduced from the original Addison Independent articles and editorials of the time.

ADDISON COUNTY — By the time 38-year-old Vermont Commissioner of Education Richard Gibboney took office in September 1965, much of Addison County was angry with the State Board of Education.

The Board of Education (BOE), however, opposed the idea on the grounds that New Haven was needed to form a stronger union in northeastern Addison County, where Bristol, Lincoln, Monkton and Starksboro residents had been hoping to replace the 109-year-old Bristol High School with a new building.

“The recent propaganda that is being circulated that there should be only two high schools in Addison County, and that this should be accomplished by closing the high school in Bristol is presumptuous,” Codding said. “A news item in the … Burlington Free Press that stated that ‘large population growth is expected in the Vergennes and Middlebury area, but none in Bristol’ is so far from the truth that it is absurd. Before this propaganda is published it might be wise for a state committee to visit Bristol and make a survey of existing and future conditions.”

A five-town union high school would have had more than 600 students by 1967-68, Codding said. Any school with that kind of enrollment “could hardly be considered marginal.” (For comparison: In 2020-21 Bristol’s Mount Abraham Union High School had 641 students in grades 7-12.)

Putting kids on buses for two hours a day would not lead to a better education, Hutchins said. It would exhaust them and it would prevent them from getting individual attention at school or participating in extracurricular activities.

“Addison County has been the subject of every survey and study that has been made during the present administration (of Gov. Philip Hoff, a Democrat) without much rebellion on our part,” Hutchins continued. “But when it comes to experimenting with the education of our children to this extent we must rebel.”

More than 800 voters in Bristol, Lincoln, Monkton and Starksboro signed a petition calling on Gov. Hoff and the Board of Education to investigate the situation in Bristol before taking any drastic action.

Meanwhile Gov. Hoff was readying a bill calling for the mandatory consolidation of Vermont’s 260 school districts. Two previous versions of that bill had failed in the Republican-dominated Legislature, and little hope was held out for this one, but it was widely believed that the Board of Education would wait to approve any building projects — such as a much needed new high school in Bristol and a junior high wing for MUHS — until legislators took up the bill in January 1966.

Many Addison County school officials felt this was too long to wait.

Gibboney’s first trip to the county was to attend a public meeting Sept. 17, 1965, in Bristol, where he was joined by Rupert Spencer, Director of Special Services for the Department of Education.

Members of a local committee who had for two years been studying the possibility of building a new Bristol high school demanded to know why they were not informed about the “two-high school” plan long before now.

Gibboney and Spencer pointed out that just months before, Starksboro, which had been tuitioning students to Champlain Valley Union High School, rejected a five-town union by a six-vote margin. This was followed by New Haven’s bid to merge with Middlebury, which left only three northeastern towns — not enough to support a new high school.

As Gibboney and Spencer sparred with five-town residents, MUHS officials convened a meeting to discuss facilities needs. Not only had the district just admitted New Haven, but the high school had also been selected as the future site of a federally funded technical-education center to serve the county and beyond. No one knew where to put all these students.

At the meeting, foreshadowing conversations to come, MUHS board chair Carl Schmidt threw out the idea that maybe some other high school could be built to encompass a larger area of the county — maybe for grades 10-12 — and MUHS could become a junior high school.

It was “just a thought,” Schmidt said.

A week later, Gibboney told the Vermont State School Directors Association he hoped to work out a “cooperative venture” between the Department of Education and Addison County’s five high school boards (in Bristol, Middlebury, New Haven, Shoreham and Vergennes) to study the county’s school situation and get the facts.

“This would make the county a kind of testing ground for a new approach to redistricting problems,” the Independent explained.

When Gibboney met with school board chairs he hinted he might ask for a thorough study of the situation to find out what facilities could be constructed where and at what expense.

An editorial in the Independent took umbrage at this idea.

“It just isn’t feasible to sit in Montpelier and draw circles on a map and then tell the public that’s where the new school will be,” the editor wrote. “That’s the way bureaucrats do it, but it isn’t the Vermont way.”

In response to increased grumbling about local control, Gibboney pointed again to Starksboro.

“Where is the local autonomy when six votes in another town can dynamite the wishes of four towns to form a union?”

Local control had not been advancing very many solutions of late:

•  Not long after Starksboro voters narrowly rejected the five-town union, they also rejected — by eight votes this time — a proposal to join the Champlain Valley Union School District.

•  After initially voting to join the five-town union, New Haven petitioners called for a vote to join Middlebury. Both districts approved the merger, but when it seemed like the Board of Education would delay its approval, a survey indicated that New Haven residents preferred the Bristol union again.

•  Middlebury-area residents had twice refused to fund an addition to the increasingly overcrowded high school.

•  When Salisbury defeated a school construction bond, petitioners immediately called for a re-vote, suggesting turnout had been too light to reflect the actual will of the town. When voters came out a second time, they rejected the bond by a 3-to-1 margin.

“All the schools seemed to be getting along fairly well until the state set up its minimum requirements,” grumbled the Independent in an editorial. At the same time, the paper noted with distaste — in both articles and editorials — that among school officials there was too much talk of “selling the public” on various proposals.

But even if consensus was reached in one or another part of the county, any proposal would still require approval from the Board of Education, and as the weeks wore on, it looked less and less likely approval would be forthcoming, at least not anytime soon.

Bristol, Lincoln and Monkton residents decided to move forward anyway. Concerned that failing to unionize meant they would either lose state aid or be forced to merge with neighboring districts, they held a vote on Dec. 1 to form a three-town union. The proposal was approved by a margin of almost 8-to-1.

But Gibboney had other ideas.

“It is not practical to proceed on any assumption other than that the County, not individual towns, is the place to begin,” he said. “Only in this way can the legitimate local interest of all towns, not just the chosen few, be realized and protected.”

Gibboney was bringing in a consultant to conduct a thorough study.

This was not meant as a delaying tactic, he insisted, but it did mean deciding the fate of Addison County schools would be put off until at least February.

Share this story:
This article’s tags:
Christopher Ross, We've Been Here Before