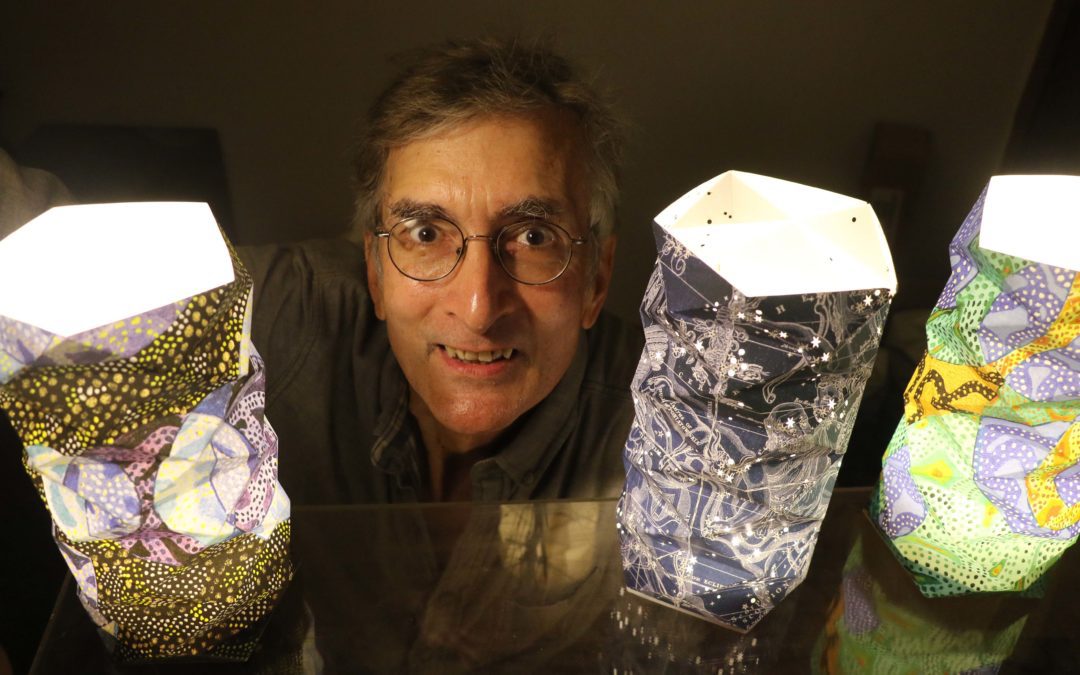 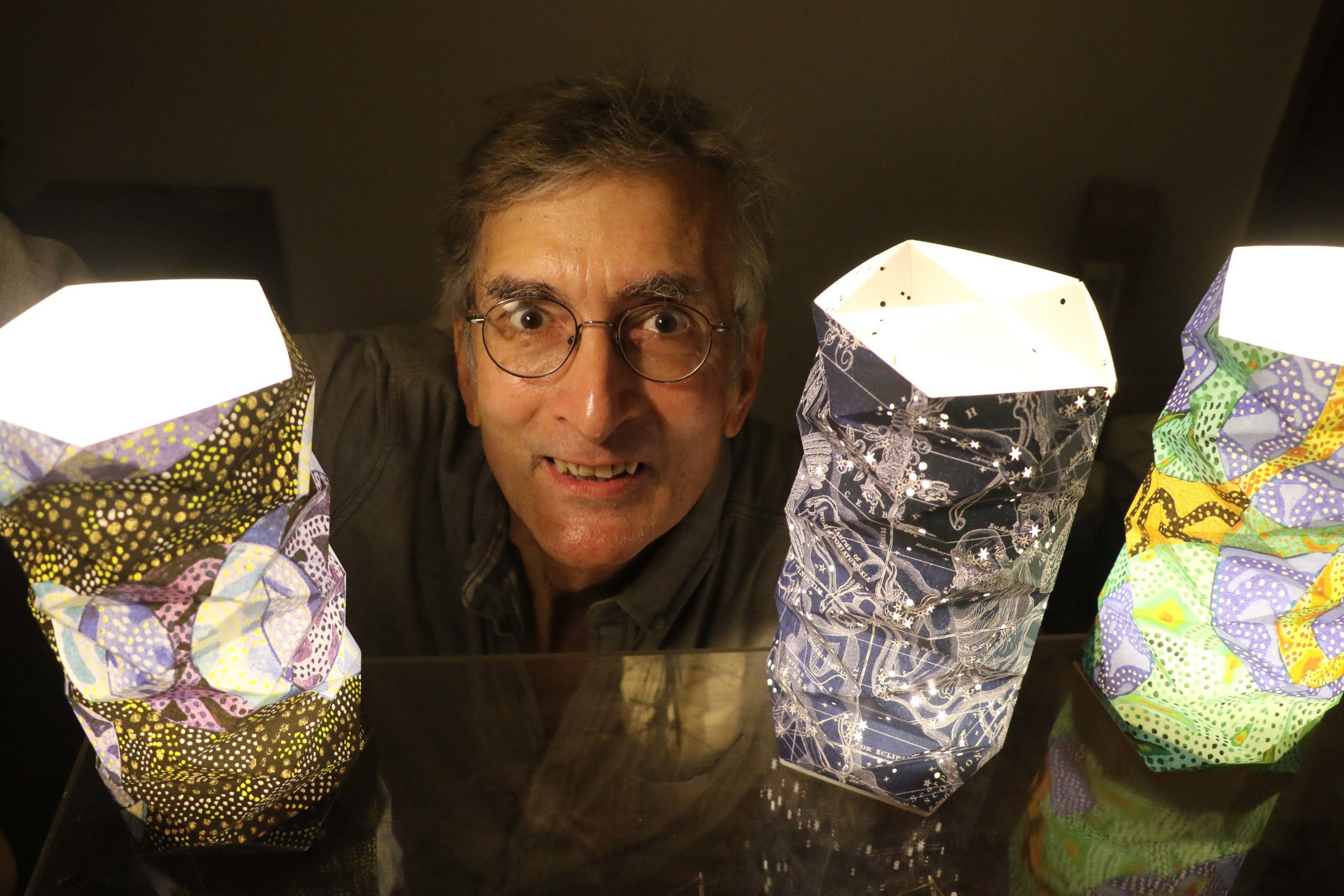 WINSLOW "WIN" COLWELL has turned his talents as a specialty kite maker to lanterns. He recently began crafting these geodesic lanterns by intricately folding paper (sometimes printed with images or pierced, and assembling the paper on a wooden base with an LED light. Colwell who is moving from East Middlebury to Ripton this week, plans to keep folding and creating these luminescent sculptures and selling them along with his kites at the Brandon Artist’s Guild and Sweet Cecily in Middlebury. Independent photo/Steve James

Are you ever tempted to take all the papers piling up in random corners of your house and just toss ’em? Ah that feeling of a good recycling cleanse can be so liberating. But hang on, because you never know what gems may be hiding in all that paperwork.

Take Winslow (Win, for short) Colwell, for example. He was sorting through paperwork several years ago and guess what he found?

“I found instructions that I’d written out about how to fold a paper lantern sitting in some dark corner of my house,” Colwell said. He had used those instructions a decade ago or so, when he taught guests at a friend’s wedding how to fold lanterns. “It became a wedding-day event… We wanted lots of them so we could ring the periphery of a tent in a field with these beautiful lanterns.”

For Colwell, who’s been making and selling artisanal kites for the past 35-plus years in the Middlebury area, these old paper-lantern instructions were just the spur he needed.

“A light bulb went on over my head,” he remembered. “At the time, I had been printing my photographs onto watercolor paper, and cutting and pasting them onto my kites… I thought, I could use that same watercolor paper and fold it in that technique we used at the wedding and make geodesic lanterns. I made a few and got so excited.”

Colwell uses specialty paper that is treated to be printed on with an Ink Jet printer that offers 100 year of light fastness. They are “durable and beautiful,” Colwell said.

The prices range from $75 (for the plain white lanterns) to $110 for the more intricately decorated pieces. Colwell is selling them at the Brandon Artist’s Guild, Sweet Cecily and on his Etsy shop: winslowcolwell.com.

“I think the lanterns have a beautiful form,” Colwell added. “They are so striking in a minimalist way. Each one makes a statement in a clean and beautiful way. They have an aesthetic that is arresting wherever you place one.”

Each lantern is hand-folded by Colwell — some are simple solid colors, others have piercings and intricate images. He uses a folding bone to make each sharp, well-defined crease, what Colwell calls “tangible geometry.” The paper sits atop a wooden base with a battery-powered LED light, which illuminates white, red, green or blue for different moods.

“I spent hours with a piece of wood and a table saw to figure out what angles I need on the base,” Colwell remembered back to when he was creating the prototype. “Then I had a friend who is smarter then I make jigs. Thanks to his wonderful help I take his jigs and produce one base after another. They are nice and heavy, with little rubber feet on the bottom.”

Colwell is thoughtful. That we can say twice. His consideration even extends to the box that he presents these lanterns in.

“I want it to be functional and beautiful, so use a laser cutter to create the box that cradles the lantern,” he said.

This cardboard creativity comes from an assignment Colwell remembers well from a 3-D design class he took at California College of Arts & Crafts (where he studied graphic design back in the early ’90s).

“Those things we learned in school we think we never have to draw on, turn out to be useful,” he said. Before Colwell was ready to use this knowledge he followed a tangential career in graphic design where he worked for Whole Earth Catalog.

“I loved these publications,” he said. “They were the embodiment of the spirit of the ’60s — celebrating free thinking and the marriage of art and science. We didn’t have our heads in the sand; we were looking at environmental issues and solutions to deep-rooted problems. Buckminster Fuller was a key thinker for these magazines.”

Colwell worked with the magazine for around five years, but by the late 1990s the publication wasn’t able to continue forward financially. Colwell pivoted to work on an internet startup for the wife of Whole Earth Catalog’s founder.

“It was nuts. It was crazy,” he said. “But it was fun. I don’t remember sleeping a lot. Everyone was trying to get their piece of the pie… I was doing all web design and missed not having a physical product.”

Colwell met his wife, Joanna (who we know and love as the owner of Otter Creek Yoga in Middlebury), out in California and together they moved to Vermont — a place Colwell, who grew up in Westchester County, N.Y., had found during his undergraduate years at Dartmouth. They first bought a house in Ripton in 2000, then moved to East Middlebury where they’ve lived until just today, July 1, when they’re moving back up into the mountains to live in their log cabin in Ripton.

“A couple of days ago I was feeling a little stressed and out of sorts,” said Colwell during an interview in mid June. “I went into my studio and stated making more lanterns… Joanna came in and said, ‘Don’t you think you have enough already? We’re about to move, we don’t need more stuff to move.’ I said, ‘I just need to do this right now.’ It makes me feel centered and calm and deeply happy to do this thing: take a flat piece of paper, fold, glue and create something that is more than the sum of its parts.”

And that’s it. That’s the special sauce right there — Colwell found it.

“I think it’s important for young people to understand, among the many options you have when you go into the world as an adult, be someone who has a passion and finds a way with that passion. Find the lantern in your own life; could be fixing cars, could be plumbing, could be poetry…. Find something that resonates with what brings you joy in life.”

HOW DID WIN COLWELL GET INTO KITES?

In his 20s, Win Colwell was the manager of a band. On the side he sold kites on a pushcart at Faneuil Hall Marketplace in Boston for his mom. When a friend came back from China (where they sold silk and bamboo kites) Colwell began to explore kite culture.

“I had not thought of kites as an art form,” he said. “Sure I had a great many memories flying kites, but it wasn’t until I started selling kites that I learned about all these traditions from Cambodia, Thailand, Japan… They are all distinct. I really found the Japanese kites had an aesthetic that I really loved. That’s when I started making my own kites.”

Colwell was attracted to the Japanese kites’ cleanliness, geometrical aspects and way they treated the surfaces of the kites as a canvas. He said he also responded well to the “tradition and reverence of the kite makers.”

“The Art of the Japanese Kite” by Tall Streeter was a big influence on Colwell and his own kites. In fact, Streeter became a “significant mentor” to Colwell.

“In one chapter of this book, the author profiles a kite maker who lives in the mountains where it is very snowy,” Colwell recounted. “That kite maker also made lanterns.

Not so different from our very own Vermont kite maker — Win Colwell — who now lives up in the mountains, where it is also very snowy, and he, too, makes lanterns.