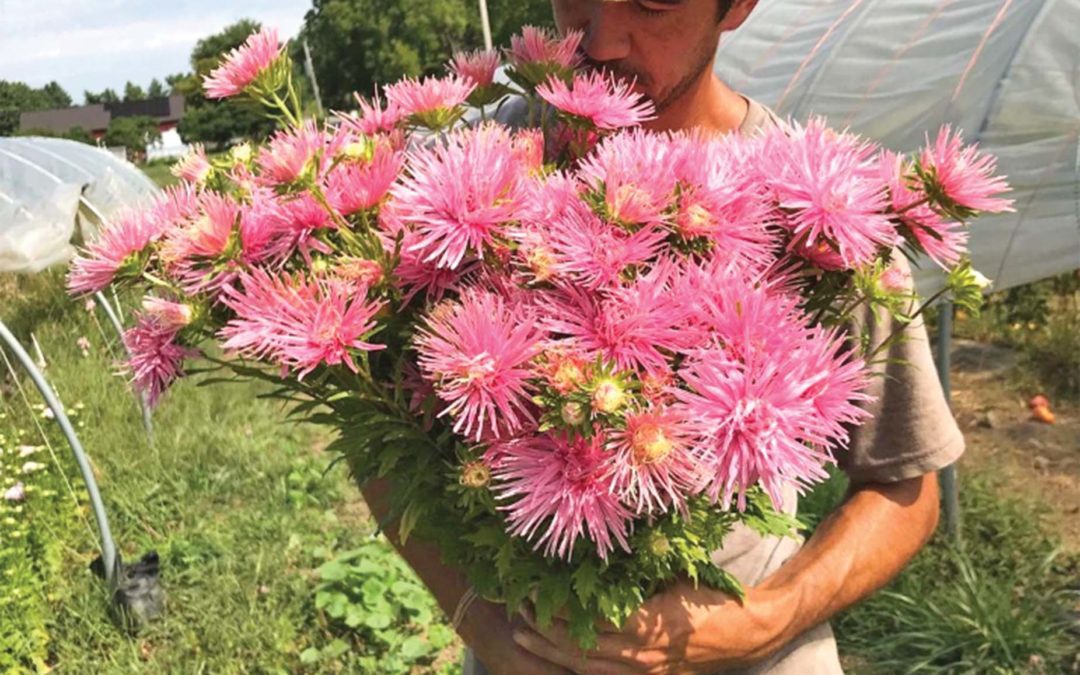 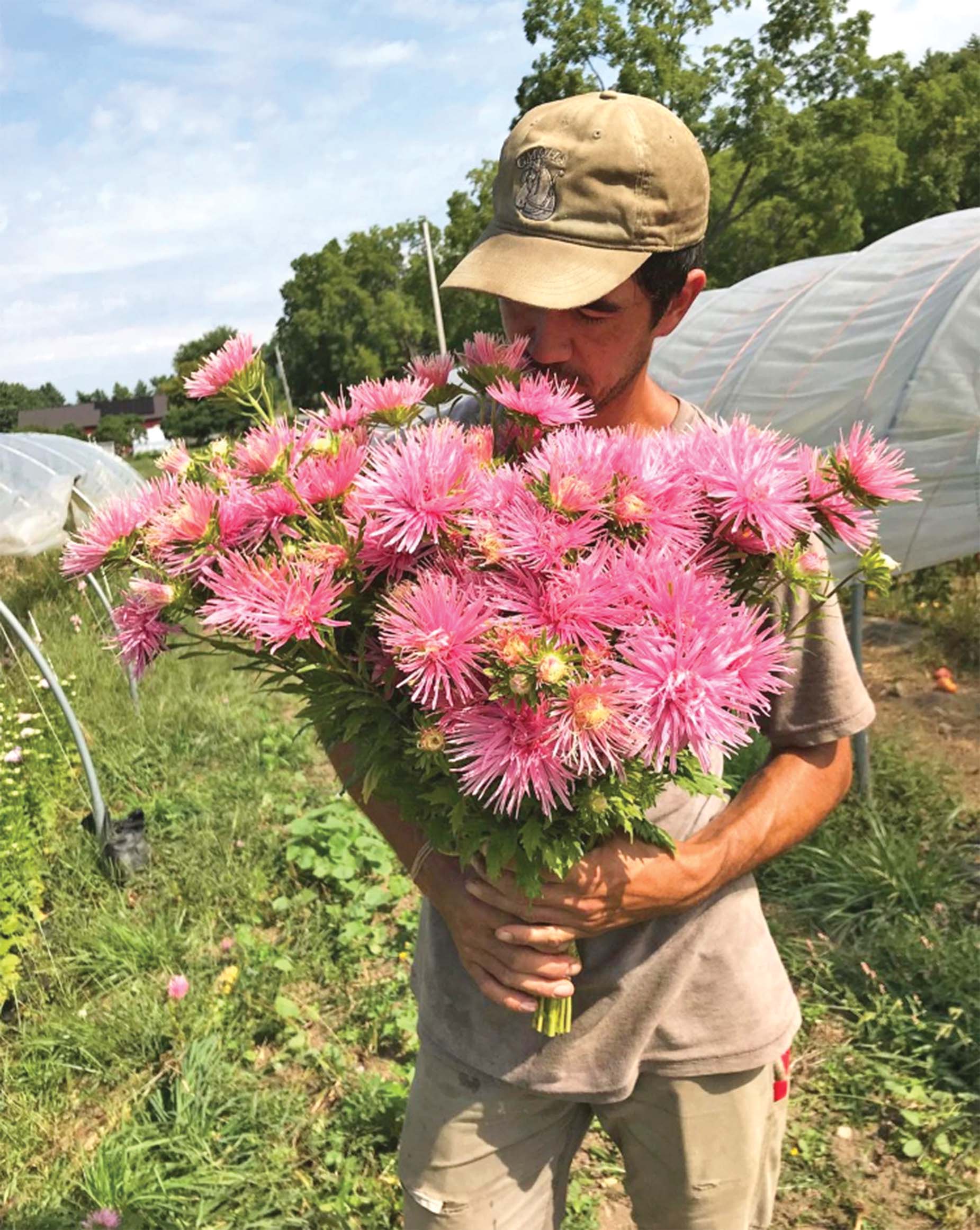 GREGORY WITSCHER TAKES a moment to appreciate the color, texture and smell of freshly cut China asters at Understory Farm last August. He and Jessie Witscher relocated their flower farm from Sudbury to Bridport this year. Photo courtesy of Understory Farm

We plant around 20,000-25,000 tulips every fall and they are such a magical treat in the spring to come out of the depths of winter.
— Jessie Witscher

BRIDPORT — Last fall Jessie and Gregory Witscher dug up 2,400 perennials from the Sudbury land they were leasing and moved them to the Bridport land they were purchasing.

It’s possible the plants may have found this somewhat traumatic.

“They’re not very happy right now, so they’re not giving us flowers,” Jessie said with a smile during a recent visit from the Independent.

But they’ll probably be fine in their new home, a loamy hilltop perennial field that stretches, literally, as far as the eye can see.

In a way, those flowers, which represent a fraction of the Witschers’ annual production, are symbolic of the past 16 months at Understory Farm: adventures, setbacks, adjustments, regeneration.

After moving east from Arizona and working at various farms in Massachusetts and Vermont, the Witschers settled in Sudbury in 2013.

“When we first moved there we were living in a hunting camp up in the woods, in the understory of the forest, with no running water or electricity,” Gregory said. The experience inspired them to name their new enterprise Understory Farm.

With their young daughter, Sawyer, in tow, the Witschers spent their first farming season plowing, hauling water and trying a bunch of different things at once.

“At first we thought we might do vegetables, but then we realized the market is saturated,” Jessie said.

They raised pigs and sold pork to chefs in New York City and elsewhere. For a time they worked for Diane St. Clair of Animal Farm, an Orwell dairy and creamery that’s famous for its butter. The Witschers would bring back the leftover skim milk to the feed their pigs.

“For years we said we should do flowers, everyone wants flowers,” Jessie said.

But they were also committed to feeding people.

“I had gotten into farming to produce food,” Gregory said.

Selling flowers remained a side gig. When the pigs emerged from their tiny greenhouse home to spend the summer in the pasture, the Witschers planted flowers in the greenhouse.

And the Witschers realized that flowers, too, feed people — just in different ways.

In 2016, Understory Farm received a grant from the Vermont Farm & Forestry Viability Program, which is administered by the Vermont Housing & Conservation Board with the goal of enhancing the economic viability of Vermont farms and forestry enterprises.

As they worked with a mentor to write their business plan, they faced a crucial question: pork or flowers?

“We realized that there was more potential for flowers than for pork,” Gregory said. “Plus there were more people asking for them.”

The following year they liquidated their pork business to focus exclusively on flowers.

In a typical year the Witschers would sell about a quarter of their flowers for events and a quarter at farmers markets, so when the pandemic hit, they suddenly lost half their business.

With tens of thousands of flowers planted for the spring the Witschers scrambled to find alternative ways to sell them.

They started a CSA (community supported agriculture) and sold 50 shares. Each week customers would come to the Sudbury farm — or to pickup points in Rutland and Middlebury — and get a bucket full of flowers.

“It was hugely successful,” Jessie said. “It replaced our farmers market sales. In fact, it shuffled our business model.”

They could have sold even more CSA shares this year, Jessie said, but they’re scaling back because of the move.

Their transition from Sudbury to Bridport is almost complete, Gregory said, but in some ways it “feels like starting from scratch again.”

Having to cut back on production during the transition will be challenging, but it’s not unusual.

“(Other farmers) are like, ‘Don’t worry about it,’” Jessie said. “‘When some operations move they go an entire year without producing.’”

Understory Farm sits on 72 acres of rolling hills just west of Snake Mountain. A nearby organic dairy farm is leasing 42 of those acres for haying.

The Witschers are growing more than 50 flower varieties, plus the foliage and greenery that’s used for floral arrangements, on six acres, up from four acres in Sudbury.

Their most popular flowers include ranunculus in the spring, lisianthus in the summer and dahlias in the fall, Jessie said.

Of course they have their own favorites, too.

“We plant around 20,000-25,000 tulips every fall and they are such a magical treat in the spring to come out of the depths of winter,” Jessie said. “They have such incredible diversity of color, shapes and smell.” And they’re easy to grow, she added.

To get back up to speed, they have two major goals in the near term.

“We want to simplify what we grow,” Gregory said. The wholesale market is big, he explained, especially for perennials like peonies and shrubs. And the market for foliage and greenery is getting bigger. In order to reach its goals, Understory Farm will need to grow more of fewer varieties.

And it will need to extend its growing season. The Witschers have already put up four greenhouses on their new farm, and two more are coming in the fall, Jessie said.

The Witschers’ new home is growing on them: the views, the nice soil, the apple trees scattered about, the nearby trails.

Gregory loves the fact that they process their flowers in the same building where Ben and Theresa Gleason used to mill their grains into flour. (From “flour” to “flower.”)

They have great neighbors, Jessie said.

And they continue to feed people, even if it’s not exactly in the way they’d originally planned.