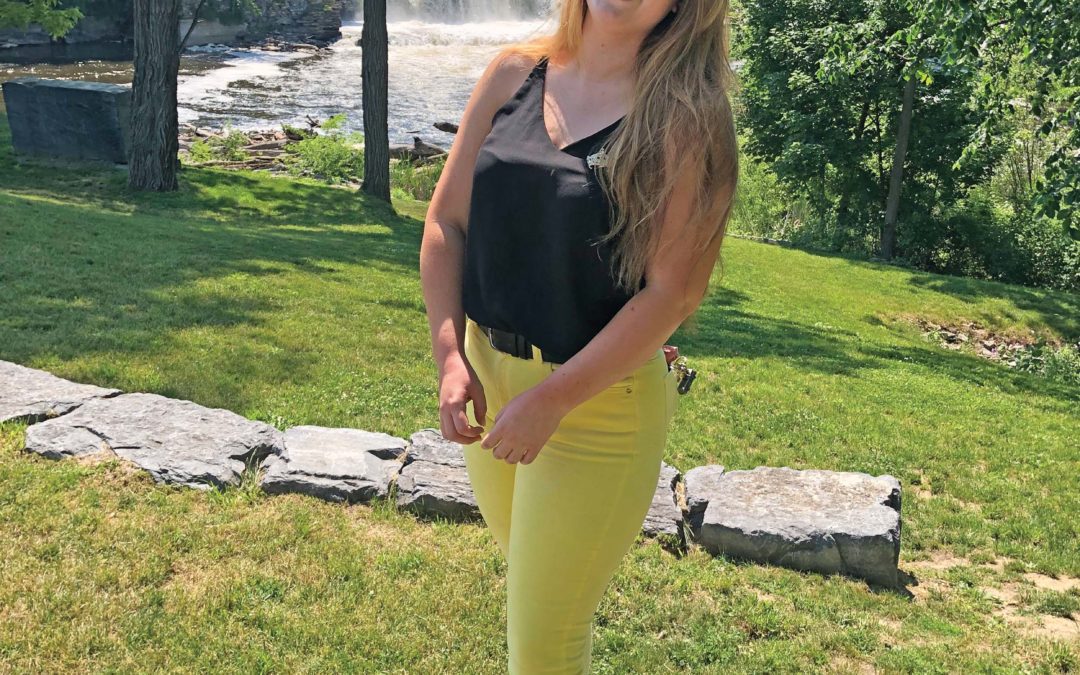 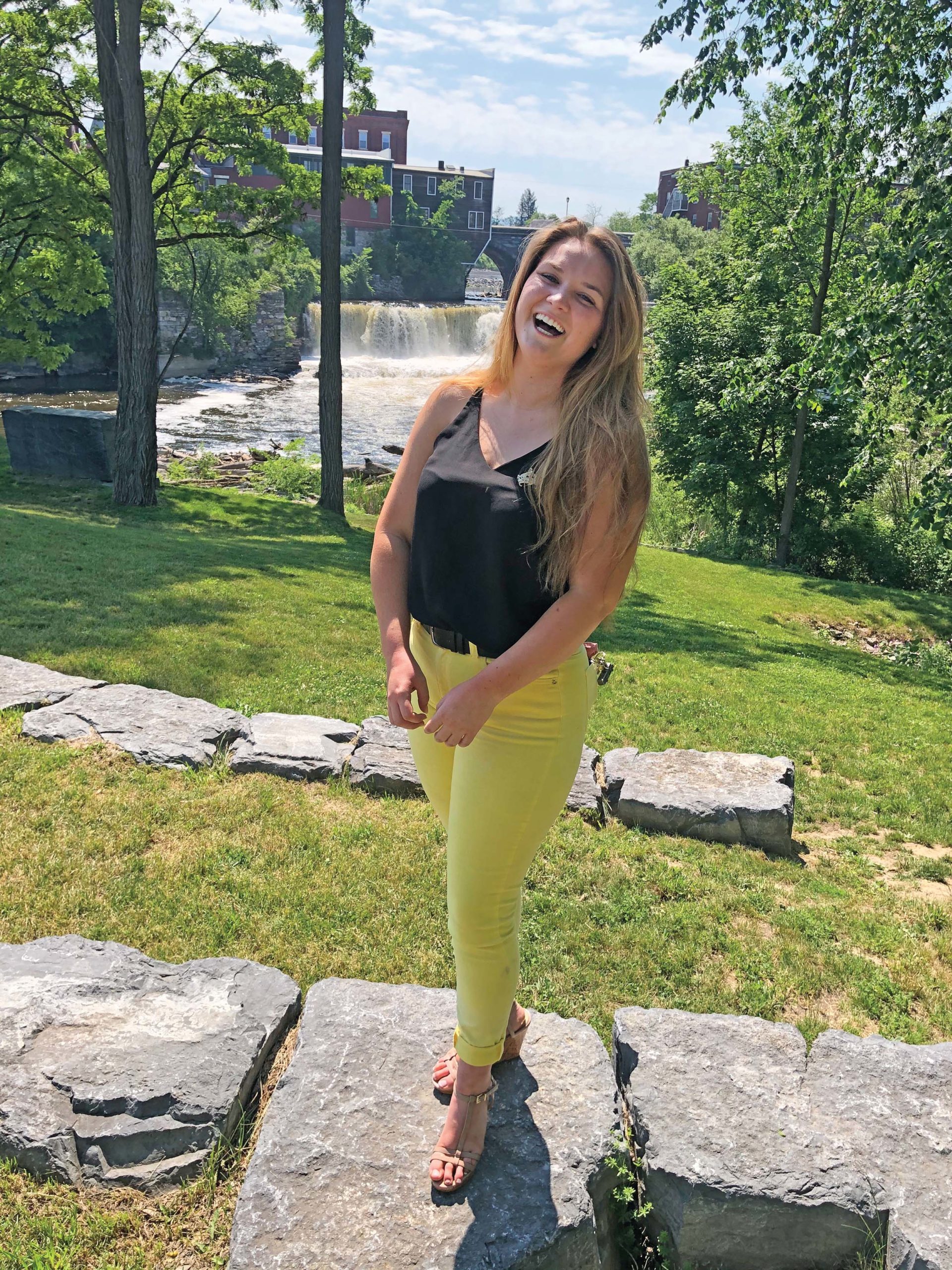 NEW HAVEN NATIVE Danielle Morse was chosen Miss Vermont 2021 last month at the Vergennes Opera House. The 22-year-old, who now lives in Whiting, will spend the year promoting the Miss Vermont Scholarship Organization and the UVM Children’s Hospital, with which she feels a very special connection. In December she will compete for the title Miss America. Independent photo/Christopher Ross

We were at a parade in our dress whites, and there was this little girl, she looked up at her mom and said, ‘Look, that’s a girl firefighter.’ And I thought, ‘I hope she grows up to be a firefighter.’
— Danielle Morse

WHITING — Danielle Morse is about to be the most photographed person in the state.

It comes with the territory. Late last month, just days after earning her bachelor’s degree from Castleton University’s nursing program, Morse, 22, was chosen as Miss Vermont 2021.

Over the next year, while working as a surgical nurse at Porter Medical Center, she’ll be traveling around the state, raising money for University of Vermont Children’s Hospital (formerly known as Fletcher Allen Children’s Hospital), inspiring young women as the ambassador for the Miss Vermont Scholarship Organization, and posing for photographs at civic functions and other special events.

In December she’ll travel to Mohegan Sun in Connecticut to compete for the title of Miss America.

For Morse, who grew up in New Haven and now lives in Whiting, this is relatively new. There are no photo albums to commemorate childhood or teenage pageants. But her Miss Vermont story does have a sort of origin photograph. It’s unusual in this context, and she has referred to it as “embarrassing.”

It depicts a 13-year-old girl recovering from surgery in a low-lit room at Fletcher Allen Children’s Hospital. Her arm pokes out from under the blanket just far enough to give a thumbs-up. The photo is grainy and the child looks somewhat weary, but she is obviously Danielle Morse. Just look at the smile.

In October 2012, in the middle of the night, Morse was transferred from Porter Hospital to Fletcher Allen Children’s Hospital to address urgent and dangerous complications following an appendectomy.

“I remember lying in bed and being pushed through the halls and seeing the artwork, and then just the cheerful environment,” she told the Independent. “Each room had a different theme. Mine was the Farm Room. It had cows and stuff, and I just remember feeling relief.”

A nurse named Heather spoke to Morse softly and made her comfortable, and Morse will never forget that. Nor will she forget all the other ways she felt nurtured and buoyed by Fletcher Allen staff during her month-long stay.

“The great thing about the Children’s Hospital is that every Sunday there was a Sundae Man who would go around and make you ice cream with toppings,” she said. “There were therapy dogs that would come around — people would volunteer to bring their dogs in — and then everyone donates blankets or stuffed animals, so your bed isn’t just white sheets and pillowcases.”

Morse spent Halloween in the hospital, where staff broke out costumes and set up trick-or-treating, office by office, so children could go around collecting candy, stickers, bubbles and stuffed animals. In a bit of foreshadowing, the staff dressed Morse like a firefighter.

For these and other kindnesses during her stay, Morse made bracelets and gave them to the staff.

“Nurses, cleaning ladies, medical students, anyone that I felt took the time to make me feel special and comfortable,” she said.

Morse had entered Fletcher Allen Children’s Hospital dreaming of becoming an architect or interior designer. She left knowing she wanted to be a nurse.

A few months later Morse returned to the hospital to say thank you. By then she had been recognized by Vermont National Guard Young Heroes, a program that honors children who have “displayed courage and bravery while battling life-threatening disease, illness or injuries.”

The nurses, Morse recalled with tears welling up, were going about their daily duties with her handmade bracelets attached to their stethoscopes.

Two years later, during halftime at a Mount Abe basketball game, where Morse was cheerleading, representatives from the Children’s Miracle Network Hospitals (CMNH) paid her a surprise visit to announce she had been selected as their Champion Child in Vermont.

One of the nurses at Fletcher Allen had written a letter to CMNH, recommending Morse for the honor.

During her work as an ambassador for CMNH, Morse met Miss Vermont 2013, Jeanelle Achee.

“I just fell in love with her,” Morse said. “I thought she was the coolest, the ideal Vermont girl.”

Meanwhile, Morse was training to become a firefighter.

She developed an interest in firefighting after she chose it for the topic of her eighth-grade challenge at Mount Abe.

“My two cousins were serving in the Middlebury and Ferrisburgh departments at the time, so I toured them and learned all about it,” she said.

Her mind made up, Morse waited patiently for a year and a half until she was old enough to apply to be a cadet in the New Haven Volunteer Fire Department.

Her mother would pick her up from cheerleading practice at Mount Abe and take her directly to the New Haven firehouse for meetings.

But she kept at it, and when she turned 18, the department voted her in as an official firefighter.

Being a young woman firefighter was “definitely tough at times,” she said. “I feel like I’ve had to work harder to prove myself.”

But it’s also had its rewards.

“We were at a parade in our dress whites, and there was this little girl, she looked up at her mom and said, ‘Look, that’s a girl firefighter.’ And I thought, ‘I hope she grows up to be a firefighter.’ I didn’t have that growing up, really. I never got to see a woman firefighter and think, ‘I want to be just like her.’”

After moving to Whiting, Morse joined the fire department there and she plans to stick with it, she said.

“That’s not going anywhere. I don’t see me ending firefighting any time soon.”

The mission of the Miss Vermont Scholarship Organization, according to its website, is to “develop the next generation of Vermont women leaders by cultivating personal growth, developing professional skills, promoting personal connections to one’s community, encouraging the pursuit of education and celebrating the unique talents of each individual.”

After she is selected, “Miss Vermont travels throughout the state, addressing diverse audiences, increasing awareness and promoting the Miss Vermont Scholarship Organization and the Children’s Miracle Network Hospitals, as well as her chosen platform.”

Morse was not selected Miss Vermont her first time out, in 2019. She tried again in 2020, but the event was canceled because of the pandemic.

“(Organizers) still wanted us to be involved, though, so we each got to pick local title names,” she explained. “We had Miss Champlain Valley, Miss Maple Leaf, (etc.). I wanted to represent Addison County, since I’ve been here all my life.”

These titles were a special one-time thing. Unlike more populous states, where local titles are awarded annually and serve as a steppingstone for the state competition, Vermont does not have enough contestants to represent each of its 14 counties, so Miss Vermont is an “open” competition.

Morse made the most of being Miss Addison County by raising money for University of Vermont Children’s Hospital during the pandemic. She did so in large part by collecting cans and bottles.

“I knew it was a hard time, and I didn’t want to take people’s money, so I went with cans,” she said. “I would drive to people’s houses — all the way up to Colchester and down to Whiting. I would put it on Facebook, like ‘Hey, I’m headed out today, does anybody have cans?’ and they’d message me and leave them at the end of their driveway.”

Morse raised $850 this way, which translates into more than 16,000 cans and bottles.

One of the biggest challenges for Morse has been convincing herself she’s good enough to have been chosen, she said. It’s a challenge she’ll likely carry with her over the next year.

“It’s like, ‘If they didn’t want you, you wouldn’t have won, right?’” she said. “You know, because I’m a firefighter and just a small-town girl from Addison County. Like, I’m supposed to be going to Miss America?! I think that’s why a lot of girls don’t compete for these titles, because they don’t realize what they’re capable of.”

Regardless of any doubts, one thing’s for sure: Morse is happy to have a platform for promoting the University of Vermont Children’s Hospital.

“My goal as Miss Vermont is to raise $10,000 for Children’s Hospital and to be in the hospital, either virtually or in person, at least once a month, so I can (connect with) the kids,” she said.

Then Morse paused for a moment.

She laughs, then looks out the window.

“But I think that would be special.”

Danielle Morse would like to see more women participate in the Miss Vermont Scholarship Organization. For more information about how she became Miss Vermont, and what it’s been like so far, message her on Instagram: @missamericavt.