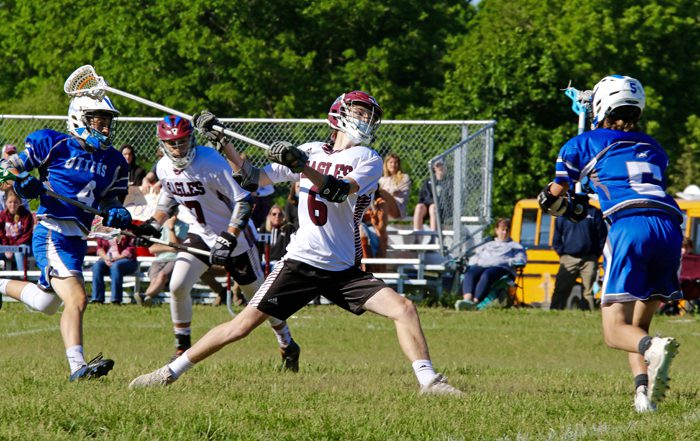 An Eagle defender lines up his long stick for a shot at the Otter goal in Thursday’s game in Bristol. Independent photo/Steve James

BRISTOL — It’s been rare in recent years that the words “winning streak” have applied to the Mount Abraham-Vergennes cooperative boys’ lacrosse team, but the Eagles are happy to say they do now.

Thursday’s 12-3 victory over visiting Otter Valley made it three in a row for the program, and the success comes at a good time — the Division III playoffs begin this week, and it allows the 5-8 Eagles, who will be the No. 4 seed in a six-team tournament, to dream big.

“I think we’re all feeling really strong about that,” said Eagle senior midfielder Griff Paradee, who racked up three goals and an assist and made several key defensive plays.

“I think we had that thought in the back of our head in the beginning of the season. I think we knew we could make a push, hopefully in the playoffs. And just seeing how far we’ve come I think we all know we can make a push.”

Eagle Coach said the creation of a D-III league and title has created a realistic goal for the cooperative program. The Eagles are 4-1 against D-III teams, having lost only to first-place Montpelier.

“Having something to play for is huge for these guys,” Cook said. “We have D-III playoffs. We get to the end of the regular season, and we have a championship that’s in sight instead of being a 12th or 14th seed.”

Cook agreed with Paradee that the team gained confidence early on even when losing. He pointed to a stretch where they dropped four straight to D-II teams with the total margin of defeat being 11 goals.

“We were so close against the Division II teams at the beginning of the season,” Cook said.

“These last couple of games we’ve started to click, especially our offense. We’re connecting passes and getting it in the goal. And our defense, they’ve been strong all year,” Paradee said.

For the Otters, who fell to 1-9, it has been a rebuilding season under first-year Coach Matt Clark. When the Otters last took the field — back in 2019 — they enjoyed a winning record and a first-round playoff victory.

But almost all of those players have received diplomas since them. Unlike an Eagle team with eight seniors, OV has two: middie David Williams and defender Jakob Stevens.

Clark is confident the Otters will fine in the long run.

“They work hard. They compete. We’ll just keep working hard, and we’ll be good,” he said.

But on Thursday OV had no answers as the Eagles bolted to a 5-0 lead in the first quarter. Cook (a long-range bomb, Paradee (cutting from Oxford), Oxford (on a feed from Olsen), Oxford (in transition from defender Carmelo Miceli) and Paradee again (on a spinning solo strike) found the net for the Eagles.

OV standout Hayden Bernhardt helped the Otters make a run in the second period. At 9:30 he round a corner from the top of the box, and 20 seconds later Bernhardt took a feed from Brady McDonough and whipped the ball home again.

Danyow’s second save in the sequence was the best of his seven on the day: He deflected a Bernhardt bullet high with the tip of his stick.

Shortly after that play Paradee dispossessed an Otter at the top of the box and started a fast break that play that led to an Anderson goal with 3:06 to go in the half. That strike killed OV’s momentum, and the 6-2 score stood at the half.

The Eagles made it 8-2 with two goals in the first 3:22 of the third period. Olsen fed Oxford for a doorstep conversion, and defender Koby LaRose raced the length of the field and set up Olsen in transition.

Bernhardt somehow powered through a trio of Eagle defenders to make it 8-3, but defense by LaRose helped keep Bernhardt in check the rest of the way. Olsen converted a Giles Hellman feed to make it 9-3 after three, and the Eagles coasted home from there despite O-Brien’s 10 saves in the OV net.

“This is our second time playing them. It’s always a good game, but unfortunately the short end each time,” Clark said. “We had our chances and made our runs, but they were disciplined today and did a good job surviving them and stopping us on the run, and we had a hard time doing the same the other way.”

Now the Eagles can turn their eyes to the playoffs, and what will be a quarterfinal matchup with the Otters on Wednesday at 4:30 p.m. The winner gets top-seeded Green Mountain Valley (5-2) in a semifinal.

Cook said he believes his team will be ready.

“I told them we’ve got three games left in our season, and that’s it,” he said. “We’re going to go to the championship.”