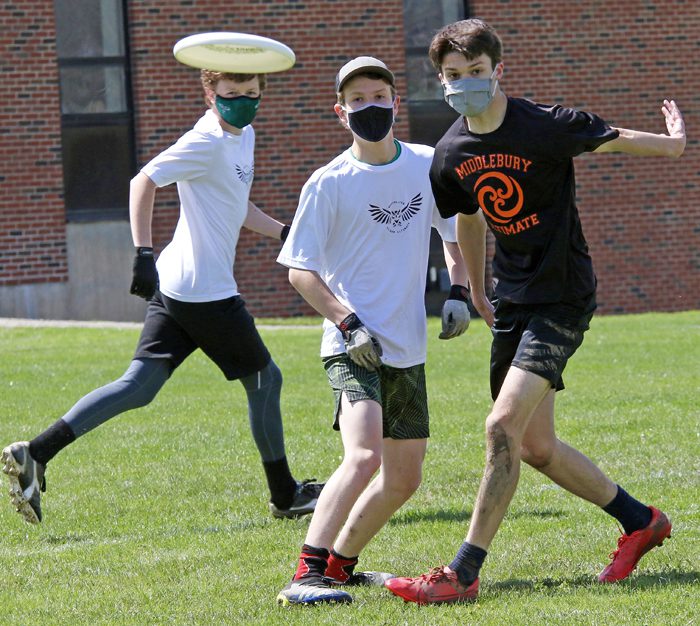 MIDDLEBURY — A young and mostly inexperienced Tiger boys’ Ultimate team that had barely trained together, let alone thrown Frisbees during the pandemic, gave the visitors from Montpelier High School a run for their money on Saturday before fading late in the game to fall, 13-5.
Senior Tim Hunsdorfer and junior Jordan Martin each scored twice and another junior, Ira Carling, notched a point to account for the Tigers’ scoring. After falling behind by three goals early in the game, the home team showed grit and determination to come back and tie it before the Solons pulled away in the final period.
“This is a bit of a young team,” said MUHS Ultimate Assistant Coach Nate Billings, who was behind the bench on Saturday. “We only have two seniors and a lot of 10th-graders who have never played this sport before.
“This season there was a late start and because of COVID restrictions we lost most of our pre-season training,” he added.
Billings noted that junior Nat McVeigh, who had three assists against Montpelier, is a good cross country runner but only started playing ultimate this season.
This is also the first year that MUHS has field both boys’ and girls’ teams — last year there was just a co-ed squad that competed in the boys’ division. After Saturday’s result, the Tiger boys’ team is winless in the three games it has played. The boys were awarded a victory by default against Vermont Commons, which failed to field enough eligible players. There are eight more games on the schedule, including Tuesday’s home tilt against Milton and an as-yet-unscheduled game at CVU to make up for one postponed because of snow last month.
Billings is an assistant to head coach Michelle Steele, but took charge of the boys’ team on Saturday as Steele was coaching the girls team in a match at Bellows Free Academy in St. Albans, where they lost, 15-1.
In assessing Saturday’s game, Billings singled out Hunsdorfer, a “handler” controlling plays from the back of the field, and McVeigh, who assisted on three goals, including a quick pass over the line to Carling after a strong deep run himself.
“Nat was also running up and down the field creating opportunities, and managed to intercept three passes from Montpelier leading to numerous turnovers, and down field hucks (deep field throws).”
Carling and junior Reilly Lawson also stood tall in the back of the end zone to knock down multiple scoring attempts from their opponents. “Third handler Lukas Broughton (the other senior), maintained composure when their cup (defensive arrangement of players meant to block the throw) trapped us on the sideline,” Billings said.
“Lukas, Nat and Tim completed pass after pass to tire out their defense, until they were worn down and had to return to a typical one-on-one mark. Lukas had multiple interceptions on defense, after learning their passing patterns, and acting proactively to stand between the handler and receiver.”
After the game, Billings said the Montpelier players and coaches stayed for an hour or so to take part in the Green Up Day clean up of garbage in and around the Middlebury Union High School campus.