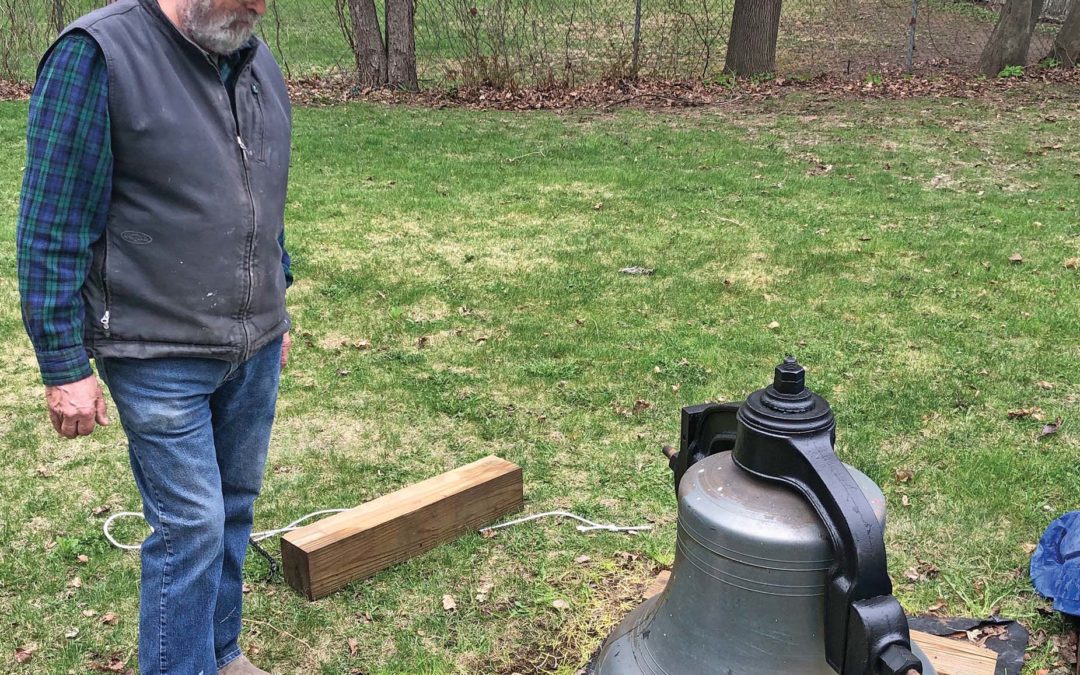 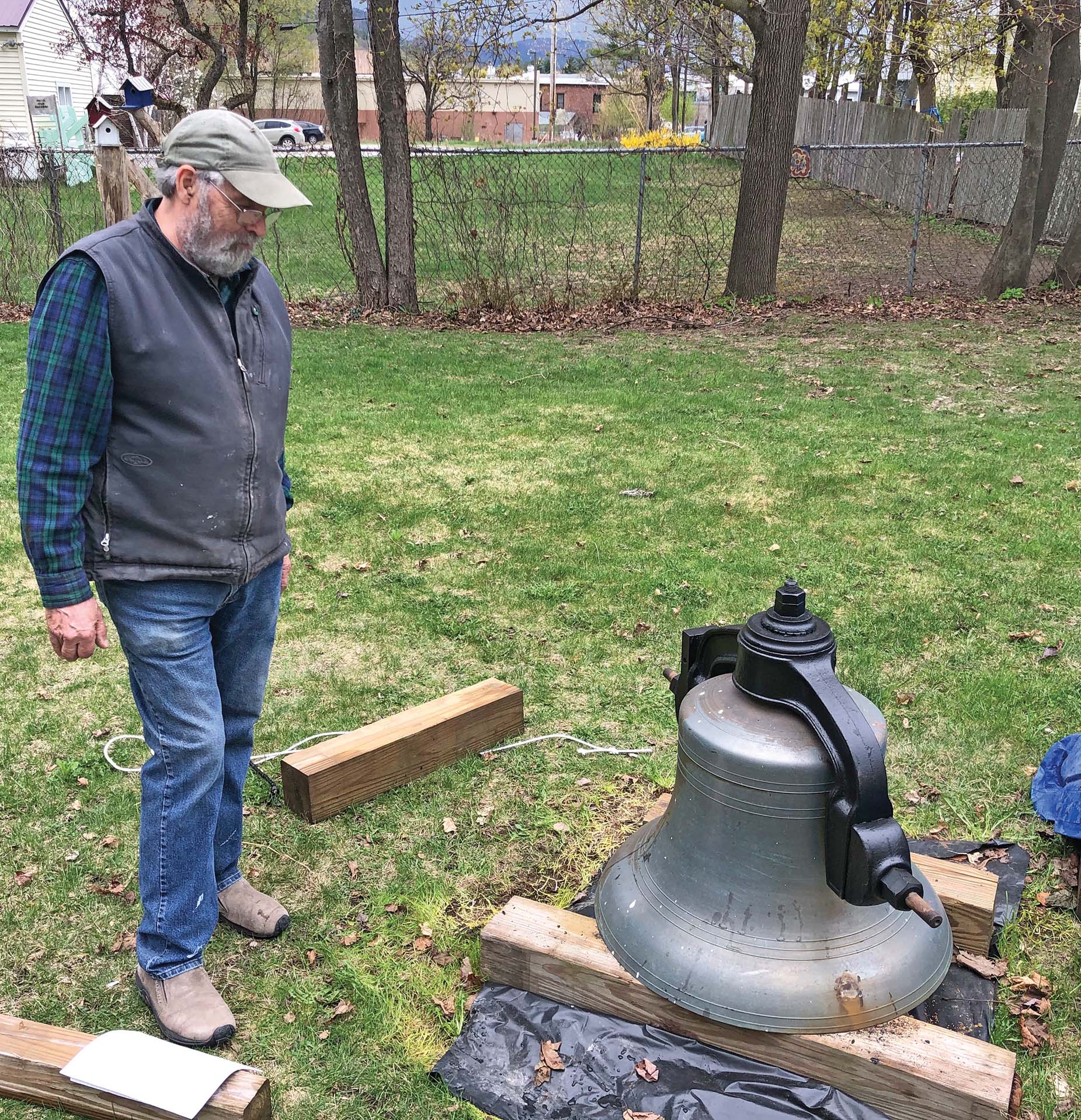 TED LYLIS RECENTLY restored the carriage and frame that support this 19th-century Clinton Meneely bell, which has occupied the Holley Hall bell tower for 130 years. Next month, the bell and its frame will be displayed on the Holley Hall lawn, while the bell tower undergoes repairs.
By Christopher Ross

BRISTOL — For the last couple of weeks Ted Lylis has had Holley Hall’s 130-year-old bronze bell sitting on some timbers in his yard.
Attached to its cast-iron yoke the bell weighs 500 to 800 pounds, Lylis estimates. Add in the wooden frame, standards and wheel, which are currently sitting in Lylis’s shop, and the whole thing’s probably pushing a half-ton.
It was quite the production getting it there, Lylis told the Independent.
First, Lylis had to climb up into the Holley Hall bell tower and attach turnbuckles, cable and steel angles to the bell frame because one of the standards (the capital-A-shaped side pieces that support the yoke) had begun to pull away, leaving the bell, almost literally, hanging by a thread.
After the bell was disconnected from its stationary frame, Randy Sargent hoisted it out with his crane and set it down on a flatbed truck. They removed the frame the same way.
Upon arrival at Lylis’s house, Sargent set up on a neighboring property, re-hoisted the bell and frame, swiveled them over the fence and set them down in Lylis’s yard.
Then Lylis and Jack Austin got to work.

LEAKY FLOOR
Normally the bell and its frame sit directly on the metal-clad floor of Holley Hall’s open-air bell tower. Recently the joints in the floor have begun leaking, and water has been getting into the room below, which houses the tower clock — the system of gears and pulleys that determine when the bell is rung.
Fortunately, when Barb Evans of Knight Consulting Engineers tested the moisture content of some of the key areas of the tower’s infrastructure on April 9, she did not find any rot.
Whoever built that floor did a good job of it, Lylis told the Bristol selectboard at its April 19 meeting.
“The biggest clue is that the ceiling is flat,” he said. “There is no sagging. There is no obvious problem from having that bell up there for 130 years, which is in excess of a thousand pounds. And it’s a point load … it’s centered over one little area in the ceiling.”
Lylis performed his own “205 test,” while he was up there, “which was me jumping around on the floor.” There was no deflection whatsoever, he said. “I jumped all over the thing and we didn’t even lose any plaster from the underside. It’s real solid.”
Selectboard member John “Peeker” Heffernan asked Lylis what would have happened if the “205 test” had failed.
“Ask Brown-McClay,” Lylis quipped, referring to the local funeral home.
Later in the meeting, the selectboard voted to hire Chris Hahn of Rooster Construction to refurbish the bell tower floor, pending a review of his proposal by Knight Consulting Engineers.
That work will go a lot easier now that the bell has been removed.

REFURBISHING
The bell’s wooden frame had suffered significant water damage over the years, which is why Lylis had to strap the thing together before it was removed.
Set up in his shop, Lylis used a special hardener to restore the damaged wood pieces — the capital-A-shaped standards, the timber base frame, and the wheel.
Austin welded cracks in the hammers and other bell accessory parts.
Together they drilled holes in the metal axles that connect the yoke to the frame, and upon reassembly of the unit will install a washer, sleeve and bolt on either side to keep the frame from pulling away from the bell again.
Meanwhile, the bell sits under a tarp in Lylis’s yard, waiting for a polish.
There are no cracks in the bronze, but oxidation has turned it the color of a gloomy day, and there are bird droppings here and there. Inexplicably there are also drippings of green paint, suggesting that the last touch-up of Holley Hall’s bell tower railing may also have devolved into some sort of paint fight.
A cleaning of the bell is imminent.

ON DISPLAY
Over the next couple of months, while work proceeds on the bell tower — and Holley Hall’s roof, which has at least one loose slate — Bristol residents will get a chance to see the refurbished bell up close and personal.
At Lylis’s suggestion, the selectboard has green-lighted a temporary display of the bell on the Holley Hall lawn. Information about the bell, its workings and its history will accompany the display, Lylis said.
Like the ones in nearby Howden Hall and the Old High School, Holley Hall’s bell is a Meneely bell made by the Meneely family to Troy, N.Y. — with one significant difference. It was made by a somewhat rogue member of the Meneely family, Clinton, who set up his own shop across the Hudson River to compete with the rest of his family, who had already been in the business for decades.
The bell was manufactured with three different ringing options: a hammer on the outside, a hammer on the inside, and a wheel that can rotate the bell. Whoever installed it at Holley Hall back in the day went with the outside hammer option (you can see the discolored spot on the bell where the hammer has hit it over and over for the last 130 years).
In the room directly below the bell, a brass and steel Howard Clockworks mechanism controls the bell hammer. Once a week for more than a century, someone has used a pully system at Holley Hall to crank a heavy granite block up to the clock room. Over the course of the week the block slowly clicks back down.
A copy of the original directions of the care of the tower clock, long since water-stained, is still posted prominently in the clock room.
After the bell tower repairs are complete, the bell will be re-installed and Bristol residents will once again have to be content with just hearing it.
The sound is better experienced from a distance.
“You do not want to be up there when that thing rings,” Lylis said, touching his ear and laughing. He was speaking from experience. “It makes the whole tower vibrate.”
Reach Christopher Ross at christopherr@addisonindepenent.com.