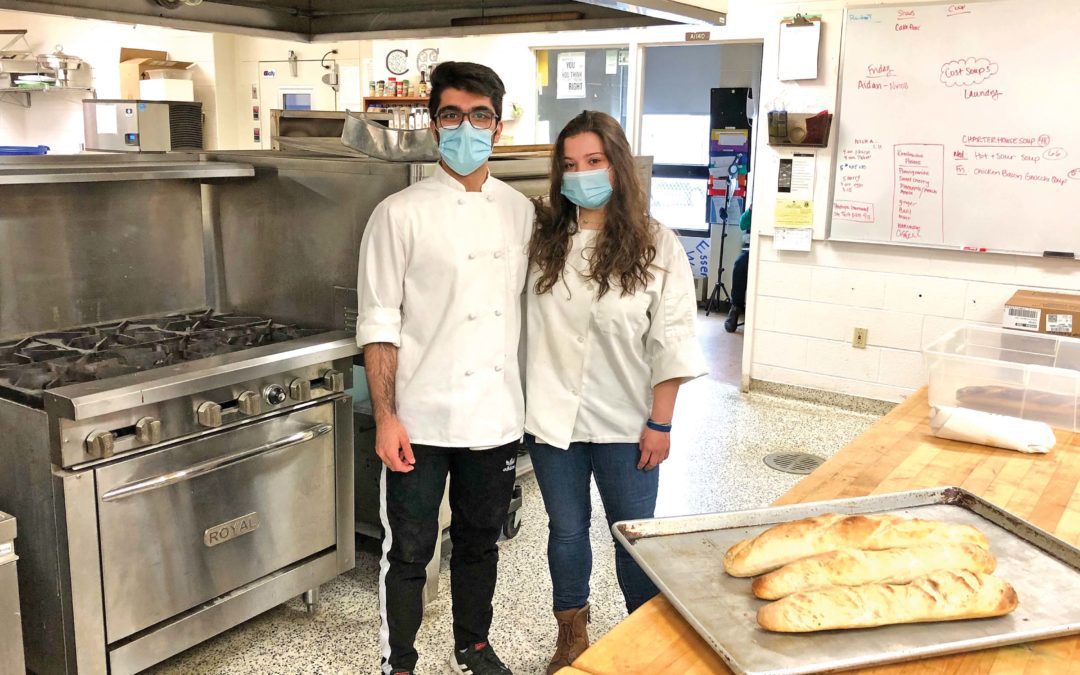 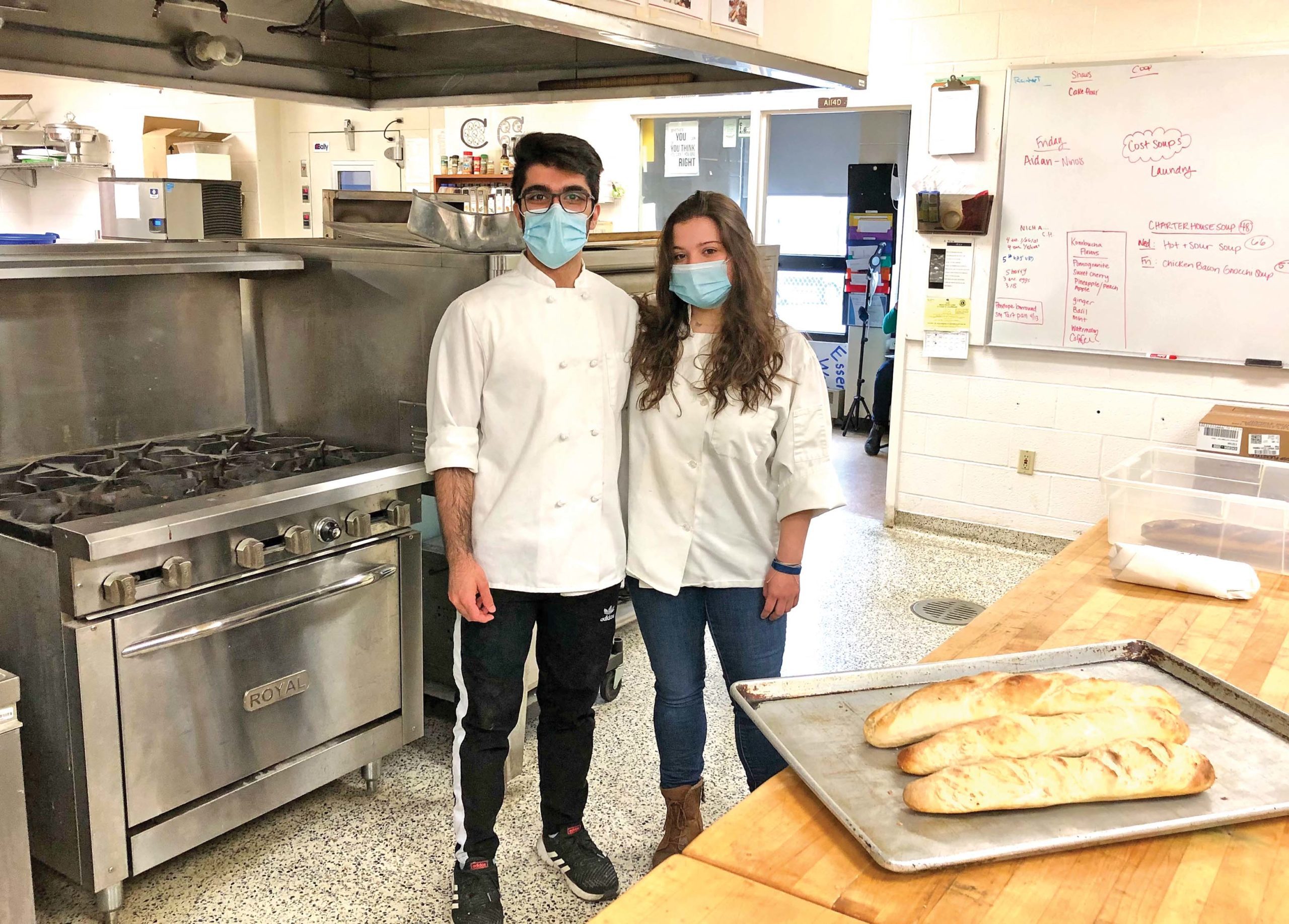 HANNAFORD CAREER CENTER Culinary Arts students Nima Mehregan (first place in cooking) and Abby Bailey (third in baking) excelled in a recent statewide Skills USA competition. Mehregan plans a career in the industry and to attend the Culinary Institute of America, and Bailey is considering the same path.
By Andy Kirkaldy

I feel like I’m starting to learn, because as you learn something you learn how much you don’t know about that thing. And that is how I feel right now. So I am super excited to gain more knowledge, more experience, more information in this food industry.
— Nima Mehregan

MIDDLEBURY — On April 8 three Patricia A. Hannaford Career Center students, all seniors, learned their best work was the best, or close to the best, in Vermont.
In one case, that of Vergennes Union High School senior and Vergennes resident Nima Mehregan, judges in the statewide Vermont Skills USA competition decided his effort in the culinary arts contest ruled supreme.
Mehregan, a Hannaford Culinary Arts Student, won a $3,000 scholarship that he will use this fall to attend the Culinary Institute of America. He also gained the chance to win more in the June national Skills USA competition.
Another VUHS senior and Vergennes resident, Ashley Tierney, who is earning her Licensed Nursing Assistant (LNA) Certification through Hannaford’s Medical Professions II course, took second in the statewide Medical Terminology competition.
And Bridport resident and Middlebury Union High School senior Abigail Bailey, a Culinary Arts student, finished third in the state Baking Competition.
All had to work against the clock, Mehregan to prepare a meal with a recipe provided by the competition on April 3, Bailey to prepare a batch of baked goods from scratch on April 5, and then Tierney to define challenging medical terms earlier on April 8, the same day the winners were announced.
All three described overcoming nerves to excel in the contest, and feeling pride in their accomplishments.

TOP CHEF
Mehregan, who came with his family from Iran in 2017, sees his win as validation on his journey to succeed here, especially in the culinary field in which he is determined to make his mark.
“I’m really proud of myself. Like I said, I’ve been in this amazing country for three-and-a-half years, and then I won first place in the state. That’s huge,” Mehregan said.
“Also I feel like I’m starting to learn, because as you learn something you learn how much you don’t know about that thing. And that is how I feel right now. So I am super excited to gain more knowledge, more experience, more information in this food industry.”
Hannaford culinary instructor Woody Danforth remembers meeting Mehregan.
“He’s a gifted kid. The first day I met him I said tell me about yourself. He said, ‘Chef, if I don’t learn every day I’m not growing,’” Danforth said. “I said, ‘I like you.’”
During the contest, even though he had practiced, Mehregan said preparing sautéed chicken, rice and vegetables from scratch with a camera running and a scholarship on the line was a recipe for nerves. It took film study afterward for him to relax.
“I was nervous. And after the competition I felt really bad. I felt like I didn’t do as good as I could have done. But when I watched that video I saw on my YouTube channel, I noticed I did a really good job,” he said.
When Mehregan was asked why he chose to attend the career center, he said there are no cooking schools in his native land, and a class visit to Hannaford opened his eyes.
“VUHS gave us a trip to the career center when I was in 10th grade,” he said. “And then I chose to visit the Glass Onion, the restaurant inside the career center, and then I noticed that I liked it, and I wanted to spend more time in it. I enjoyed the environment,” he said.
Mehregan signed up for the yearlong Culinary Arts program as a senior: “And here I am.”
That program focuses not only on cooking, but on food management and operating Hannaford’s Glass Onion restaurant. And that, Mehregan said, is helping him prepare not only for his further education at the Culinary Institute of America, but also his future.
“My long-term goal is to open a restaurant in the United States, and be the chef of that restaurant, but to also be the owner of that restaurant,” Mehregan said.

NURSE IN TRAINING
Tierney is pursuing a dream she has held longer than Mehregan’s. Tierney is in the second year of Hannaford’s two-year Medical Professions course, and she will graduate as an LNA, assuming she passes a licensing test. (The National Technical Honor Society member is likely to do so.)
Tierney has also attended Hannaford’s evening school to become a licensed phlebotomist, and will use that and her LNA license to help pay her way through school, which will begin with attending Plymouth State University to become a Registered Nurse.
Tierney plans then to obtain a master’s degree to become a nurse practitioner and “hopefully open my own practice for pediatrics.”
That’s where the lifelong dream comes in for Tierney, who has been a private caregiver and now works part-time as a Helen Porter nursing home geriatric aide.
“I just always knew that I like kids. In third or fourth grade I told people, ‘I want to be a kid doctor,’” she said. “It kind of got more narrative to it as I got older.”
All that doesn’t mean the Skills USA Medical Terminology test was easy for Tierney. She said the test administrator told the contestants they faced “the hardest medical test we’d ever taken.”
“He was not lying,” she added.
When she was done, Tierney clicked to see her score and learned she had 70 of 100 questions correct. Her hopes were not high, but she recalled what the test administrator said:
“So I was, like, I feel pretty good about it, but I don’t know.”
That evening at the Skills USA contest Tierney learned she finished second
“I was just super proud of myself. I was always taught to work hard at anything you do,” Tierney said. “So I just refreshed on the medical terms and took my best shot at it I could. So it felt pretty great.”
Tierney said following professionals at Porter Hospital during the first year was helpful, as was both years’ training at Hannaford.
“The first year, basically, I had a list on my mind of any occupation I wanted to do, and I would go shadow them. And I would say, that’s really not what I thought it was going to be,” Tierney said. “And then this year, having the opportunity to take an LNA class while you’re still in high school, is just amazing.”

‘PASSION FOR BAKING’
Like Tierney, Bailey’s interests developed early on.
“Ever since I was little I’ve always been in the kitchen, and it’s grown a little more from cooking into baking,” Bailey said.
Before the Culinary Arts course, Bailey sold birthday cakes and other baked goods to help fund causes that included a car purchase and participation in a band trip.
But Bailey said she didn’t understand the financial end of the business until the course and its tie-in with the Glass Onion, while it has also helped her realize how much she enjoys baking.
“It took me experiencing selling bread for me to discover I love the entrepreneurial aspect of everything. I can see other people enjoy what I make, and that’s what I really enjoy about it,” Bailey said.
But, again, all that experience doesn’t mean competing in Skills USA was a breeze.
“I didn’t get any sleep the night before,” Bailey said. “All my practice ones turned out pretty decent. But I would just worry if I could do that same quality whenever it actually mattered.”
After the two-and-a-half contest hours ended, Bailey saw videos of her competitors’ offerings. At first she was daunted, but eventually made an accurate assessment of her effort.
“You’re looking at all the other people’s stuff when it’s being uploaded and comparing yourself to everything,” she said. “But then later, once all was said and done, I sat down with myself and said, ‘You know what? I actually did fine. I’m really proud of what I did.’”
Bailey is deciding between studying plant science in college, or attending the Culinary Institute of America.
“Either way, I still want to tie it into food. I love working with fresh ingredients in my baking,” she said. “I would love to in some way, shape or form continue on with it.”
Her instructor is confident she will succeed regardless of her choice.
“She can go in any direction she wants to go,” Danforth said. “She’s got a work ethic, and organization.”
And Bailey echoed her peers in praising her course and the school.
“You learn the practical aspect of cooking, too. Everything we make we cost out. We learn how much money we can make from something. We learn how to deal with people, because when we open the restaurant we have to work out there, too,” she said. “I think it’s a really good way to enter the culinary industry.”