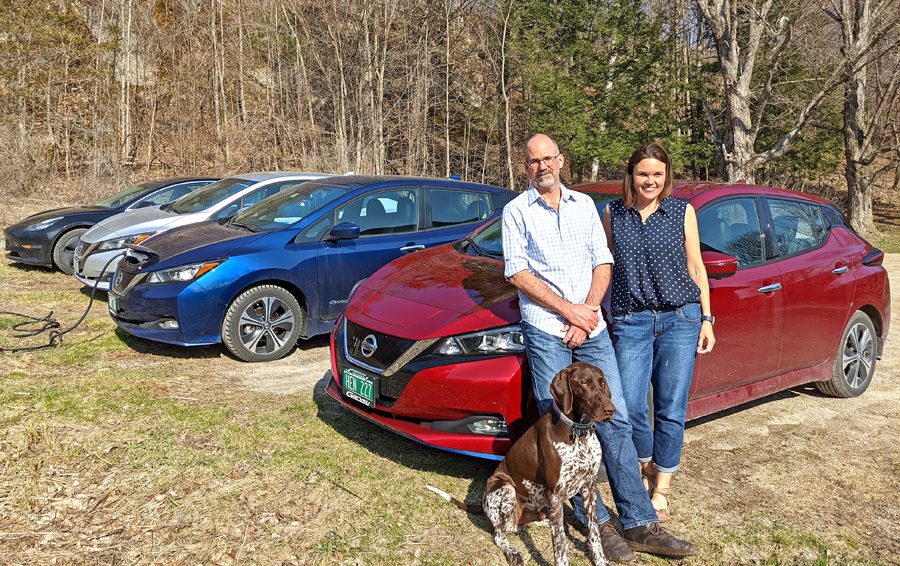 NEW HAVEN RESIDENTS Taborri and Susan Bruhl, along with their two daughters, have had a total of nine Nissan Leaf electric vehicles over the past eight years, including the three pictured here. They installed charging stations and increased their solar capacity to “fuel” them.
By Christopher Ross

“We’ve taken the cars on numerous cross-country trips, including one 10,000-mile trip from Vermont to San Diego, and around California and back in a big loop.”
— Taborri Bruhl

ADDISON COUNTY — Taborri Bruhl and his family in New Haven know a few things about electric vehicles (EVs).
“My wife, Susan, and I have driven EVs since 2013, when we leased two Nissan Leafs,” Bruhl told the Independent. “We loved the cars, and when the leases were up we turned them in and leased two more in 2015, and then two more again in 2018, and then my wife just traded that one in for a 2021 Leaf.”
Counting their two daughters, who are also leasing them, the family has had a total of nine Leafs over the years, Bruhl said. And each model has been better than the one before. Susan’s current Leaf SL, for instance, has an EPA-rated range of 215 miles.
“We’ve taken the cars on numerous cross-country trips, including one 10,000-mile trip from Vermont to San Diego, and around California and back in a big loop,” Bruhl said.
When public chargers were harder to find in the middle of the country — a situation Bruhl pointed out is rapidly improving — they were able to charge overnight in RV parks.
The Bruhls transitioned to EVs for environmental reasons, Bruhl said. They even increased the size of their rooftop solar array so they could power their cars with sunshine, and installed two EV chargers at the end of their driveway.
“I fairly quickly realized that they were simply better cars. EVs require dramatically less maintenance than internal combustion engine cars, they are much cheaper to ‘fuel,’ and they are quiet, quick, handle very well, are smooth and vibration free, and you don’t have to smell stinky exhaust like you do when you drive a gas car.”
Bruhl’s latest car is a 2019 Tesla Model 3, Standard Range, which can travel up to 240 miles per charge.
“In terms of range, charging speed, the availability of charging, Tesla is way ahead,” Bruhl said. “Whereas years ago having and driving an EV required a bit of a lifestyle shift, the Tesla makes it all pretty easy, especially when traveling. Tesla’s fast chargers, called Superchargers, charge many times faster than fast-chargers for other EVs, and there are thousands of them across the U.S., and most are in convenient spots near highway exits. The navigation system in the Tesla will even plan out which chargers you need to use, and guide you to them.”
Since buying it, Bruhl has put 60,000 miles on his Tesla, commuting to work in Rutland and taking it on several cross-country trips.
The best thing about it?
“The amazing acceleration and handling,” he said. “It is VERY fun to drive. I also like powering our cars with renewable solar.”
One of the challenges of driving an EV, especially in Vermont, is cold weather, which can impact driving range and charging speeds.
But that won’t stop Bruhl from heartily recommending EVs to others.
“With the longer range that EVs have today it isn’t as much of an issue, but it’s still something to consider,” Bruhl said. “The batteries warm up as the vehicles are driven … so on a trip it’s really just the first leg that is impacted.”

THIS IS THE FUTURE
Weybridge resident Fran Putnam also drives an all-electric Nissan Leaf (2015), and her husband, Spence, drives a 2017 plug-in hybrid (PHEV) Chevrolet Volt, which he leased from what is now known as Middlebury Chevrolet.
The Putnams transitioned to an EV and PHEV to “lower our carbon footprint, spend less on gas, save money, and lower maintenance costs,” Fran said.
Initially, making the switch produced some “range anxiety,” Spence said, but that was eliminated when they leased the Volt, which switches over to gasoline when the battery’s 50-mile range has been reached.
The Putnams have a Level 2 charger at home, Fran said. “We use public charging stations much less than the home charger, and only when we travel more than 25 miles from home.”
The best thing about their cars is that they lower the Putnams’ carbon footprint, they said.
“As long as you are on battery (the hybrid Volt) uses no fossil fuels, so it is great close to home,” Spence said. “But you can also take it on long trips without worrying about charging. It is exceptionally quiet, actually even in gasoline engine mode.”
Both cars have met the Putnams’ expectations, they said, except for the effects of cold weather.
“We weren’t prepared by how much the range would decrease in cold weather,” Fran said.
And the Volt, which the Putnams are looking to replace, has one annoying feature, Spence said. The gasoline engine comes on in cold temperatures — below 32 degrees — even if the battery is fully charged.
Other than that, the Putnams have not faced major challenges with their cars’ “EV-ness,” they said, and they would both recommend EVs to others.
“This is the future,” Spence said.
Watch a video of the Putnams charging their electric vehicles online at addisonindependent.com.