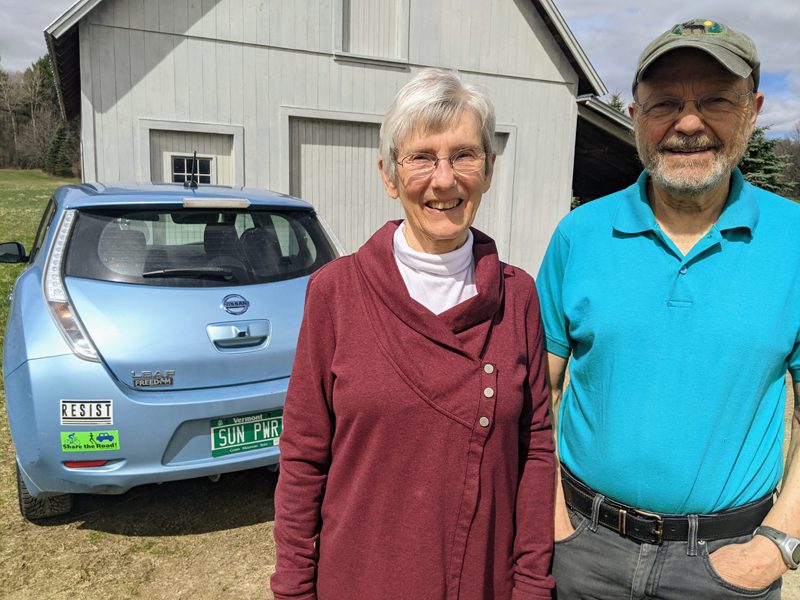 WEYBRIDGE RESIDENTS FRAN and Spence Putnam have driven all-electric or hybrid-electric vehicles for years and enthusiastically recommend them to others because they pollute less, are quieter, and require less maintenance than their gas- and diesel-powered counterparts.
By Christopher Ross

ADDISON COUNTY — If you took the $174 billion President Joe Biden has proposed spending on electric vehicles (EVs) over the next decade and split it evenly according to population, Vermont’s share would come to something like $330 million.
Of course, that’s not how it works, and for now President Biden’s proposal is just that — a proposal. But it’s not hard to imagine the impact significant federal funding for EVs could have in Vermont, which already boasts more EV charging stations per capita than any other state, ranks seventh in the nation for electric vehicle policy and has gotten this far by spending only a few million state dollars.
Biden’s EV proposal is part of the $2 trillion American Jobs Plan, designed to upgrade U.S. infrastructure and create new jobs. It’s a follow-up to the president’s $1.9 trillion COVID relief package, the American Rescue Plan Act.
“This is the moment to reimagine and rebuild a new economy,” Biden announced on March 31. “Public domestic investment as a share of the economy has fallen by more than 40 percent since the 1960s. The American Jobs Plan will invest in America in a way we have not invested since we built the interstate highways and won the Space Race.”
The president’s $174 billion EV plan would:
•  help automakers establish domestic supply chains.
•  retool U.S. factories to make batteries and EVs.
•  provide point-of-sale rebates and tax incentives to buy U.S.-made EVs.
•  help fund the creation of a national network of 500,000 EV chargers by 2030.
•  replace 50,000 diesel transit vehicles.
•  electrify at least 20% of yellow school buses.
•  electrify the federal fleet, including the U.S. Postal Service.

STATE EV PROGRESS
Vermont is already pursuing some of these goals.
In 2019 the state launched an EV incentive program with $1.1 million in funding to help Vermonters switch to EVs.
By July 2020, there were nearly 4,000 EVs registered in the state, a 21% increase over the year before and a 321% increase since 2015, according to Drive Electric Vermont.
There are currently 292 public EV charging stations in Vermont, more than 100 of which were built using money from the state’s Volkswagen settlement funds.
In February, Gov. Phil Scott announced the state would build 11 new EV fast-charge stations over the next two years, at a cost of $1.7 million. When those stations are complete, every Vermonter will be within 30 miles of a fast-charge station, Scott said.
Earlier this month, the Vermont Electric Vehicle Supply Equipment Grant Program, which in 2019 funded park-and-ride EV charging stations in New Haven and Starksboro, announced it would build six more, including one in Vergennes.
On April 6, Gov. Scott proposed spending $200 million of the state’s share of American Rescue Plan funding to fight climate change, including $25 million over three years for EV infrastructure.
“Although electric vehicles are a small fraction of the existing vehicle stock in Vermont, their deployment is growing rapidly — both within Vermont and the region,” Scott said. “Continuing to build charging infrastructure throughout Vermont is foundational to supporting this growth and ensuring we are well-positioned to take full advantage of the opportunities and benefits afforded by EVs.”
Gov. Scott has also proposed spending $1 million to install charging stations at multi-unit dwellings, to make them accessible and affordable to more Vermonters.

EV EQUITY
Accessibility and affordability are key concerns for Renewable Energy Vermont (REV), which represents businesses, nonprofits, utilities and individuals committed to transitioning from fossil fuels to renewable energy.
“Any transportation-related infrastructure must reduce climate pollution and increase energy equity by making the benefits of renewable energy accessible to all Vermonters,” REV Executive Director Olivia Campbell-Andersen told the Independent. “The easiest way to achieve these goals is to invest in and expand proven solutions that are already making a difference in the lives of Vermonters.”
REV’s top transportation infrastructure spending priorities include:
•  planning for and setting out a clear requirement that 100% of all new vehicle sales be EVs by 2030.
•  continuing or establishing equitable consumer point-of-sale incentives for light- and heavy-duty vehicles; vehicle retirement incentives, such as rebates to retire internal combustion engine (ICE) vehicles; and incentives for used EVs to promote EV ownership at all income levels.
•  requiring all transit buses purchased with state funding or support be electric by 2025.
Campbell-Andersen herself bought an EV this year.
“I’m thrilled to now be driving on sunshine,” she wrote in a February op-ed published in the Independent. “The pride in my young daughter’s eyes and voice when she tells others that our car doesn’t pollute the environment is priceless. Recognizing the privilege my family has to realize one of our climate resolutions motivates me to work to enact the policies that will make this type of choice real for all Vermonters.”

CHALLENGES
EV policies and incentive programs may be gaining steam, but one big hurdle remains: convincing consumers.
“We hear consistently that the upfront purchase price is the biggest barrier to EVs,” Drive Electric Vermont Coordinator Dave Roberts told the Independent.
Drive Electric Vermont is a partnership between the state and the Vermont Energy Investment Corporation. Its website, driveelectricvt.com, provides the most comprehensive and up-to-date EV information in the state.
A few things will need to happen before consumers get comfortable enough to switch to EVs, Roberts said:
•  Driving ranges need to improve. Ranges have improved significantly over the past several years, and many EVs can now travel more than 300 miles on a charge, but range continues to be a major concern in rural areas.
•  Charging infrastructure needs to expand. Compared with gas stations, EV charging stations are sparse, and it takes longer to charge an EV battery than it does to fill up a gas tank.
•  EV technology needs more weatherproofing. Cold temperatures, especially as they dip below the mid-teens can significantly reduce EV driving ranges and slow battery charging speeds.
Advances are being made in each of these areas, but information about improvements has been slow to reach the public.
“In general, a lot of people just don’t know about this stuff,” Roberts said.
So in addition to funding incentives and infrastructure, the state will be looking to ramp up consumer outreach and education, he said.

CHIP SHORTAGE
In the near term, unfortunately, whatever limelight EVs might have enjoyed as a result of President Biden’s proposals has been stolen by a global semiconductor shortage.
When automakers shut down their factories early in the pandemic, chip makers turned their focus to computer and gaming consoles, according to last month’s edition of Autoweek magazine. When automakers later reopened, chip makers were locked into contracts for consumer electronics, which had experienced soaring demand during COVID lockdowns, and suddenly there weren’t enough chips go to around for carmakers.
In recent weeks, most major automakers have had to idle production lines, and one industry group has warned the chip shortage could disrupt production for at least six months and reduce overall 2021 output by as many as 1.28 million vehicles, according to a report this week by Reuters.
President Biden planned to meet with the executives of several major companies on Monday and was expected to recommend $50 billion for semiconductor research and manufacturing.

OPTIMISM
In the meantime — short-term hiccups notwithstanding — there are three things that make Drive Electric Vermont’s Roberts especially hopeful:
•  Incentives: federal, state and utility incentives have made EVs more affordable for more people, and it’s possible they will get even better.
•  Variety: more crossovers, pickups and all-wheel-drive EVs are on the horizon, which will give consumers more options to fit their lifestyles.
•  More used EVs: Roughly 60% of the vehicles Vermonters purchase are used, so the growing availability of used EVs will provide more ownership opportunities for more people.
For more information about EVs in Vermont, including which models and incentives are currently available, visit driveelectricvt.com.