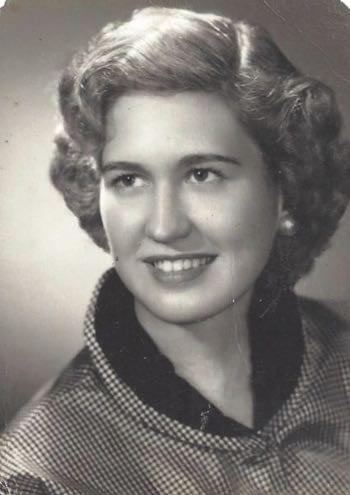 MIDDLEBURY — Joan Bullock, 84, died March 10, 2021, of natural causes related to late-stage dementia. Joan was born in Lancaster, Pa., the daughter of the late Russell Beazley and Marie (Schlegel) Beazley. Joan grew up in Allentown, Pa., graduating from Allentown High School.
After high school Joan was employed at the Morning Call newspaper, which also was the Evening Chronicle and Sunday Call Chronicle, selling advertising. She then became a teller at the Bell Telephone Company prior to having her family. She moved to Bridgewater, N.J. after her marriage. She divorced and worked as a teller at Somerset Trust Company in Somerset, N.J. She became the Director of Public Relations at the Somerset Community Action Program (SCAP) in Franklin Township, N.J., and then the Executive Director of Mobilization of Resources, Somerville N.J. Joan would continue to fight for equal rights, justice for the poor and disenfranchised, and for the widening of the social safety net her entire life. While in New Jersey, Joan managed the local Volunteers in Service to America (VISTA) program. She served on the board of the Day Care and Child Development Council of America in Washington, D.C., and testified on childcare before Senate sub-committee hearings in Washington. Joan served as adjunct professor at Rutgers’ Graduate School of Social Work.
Joan’s ability to organize and communicate served her well in both her directors’ positions and her future rolls in hospitality and retail. In 1978 she purchased The Chipman Inn, in Ripton, Vt. The consummate innkeeper, Joan welcomed travelers, Bread Loaf Writers Conference attendees, and locals to her establishment until 1985, when she decided to sell the business. Joan then moved to the New Hampshire seacoast, purchasing the Bow Street Candle and Mug shop in Portsmouth, and then opened a second store, The Square Rigger, in 1987.
Joan eventually moved to Maine, working at The Black Point Inn on Prout’s Neck in Scarborough, taking jobs in the off season at the Foreside Company and working as an advertising representative for Country Inns magazine before working full time at The Norumbega Inn in Camden until her retirement. Joan was a member of the Outreach Commission at the Camden Congregational Church, a member of its Subcommittee of Heavenly Threads, and a member of its Christian Education Committee. She also was on the Board of Home Counselors, a nonprofit agency counseling troubled youth and their families in the home. She also participated in Maine’s “Stop the Hate” campaign and was active in the Camden Rockport Animal Shelter. Joan was also a volunteer at the Restorative Justice Project in Rockland, Maine.
Joan moved to New Bedford, Mass., in 2009 after the death of her daughter Susan. She attended the Congregational Church in Fairhaven, and volunteered at the local soup kitchen through the church. Her retirement did not last; in 2012 Joan and her son Chris purchased the Chipman Inn back from the owners to whom she’d sold it in 1985. The community welcomed Joan back with open arms, especially her old friend Tony Clark of the Blueberry Hill Inn in Goshen. Joan continued to regale her guests with stories, from Robert Frost’s displayed snowshoes over the inn’s fireplace, to the blowpipe she traded for a peace necklace from a headhunter in Peru in 1968, to the jazz cruise to Cuba where she became friends with Ry Cooder, to her 75th birthday trip to Machu Picchu. The inn was filled with family and friends for Joan’s 80th birthday celebration in 2016. Joan was an avid reader and news watcher; her children always teased her about the news clippings she’d send to them with her cheerful notes between visits. Proud of her Pennsylvania Dutch roots, Joan’s famous shoo fly cake was a favorite of the inn’s guests.
Joan moved to Helen Porter Nursing and Rehabilitation Center as her health began to fail.
Joan is survived by her son Stephen Bullock and his wife Deborah of Fairhaven, Mass.; son Christopher Bullock of Ripton, Vt.; beloved granddaughters Dr. Ashley Bullock and her fiancé Dean Coughlin and Dr. Alysha Bullock and her fiancé Rick Harrison of Connecticut; brother David Beazley and his wife Dorothy and brother John Beazley and his wife Linda, all of Pennsylvania; and niece Karen McFaul and nephew Mark Beazley and their families, of New York and Michigan. Joan leaves friends nationwide, especially Ronald Copeland of Metuchen, N.J., who was Executive Director at SCAP and a lifelong friend. Joan was predeceased by Ron’s wife, the late Kate Ertz-Berger who was a VISTA volunteer and another lifelong friend. Joan was the mother of the late Susan Bullock.
In lieu of flowers, donations may be made to the Southern Poverty Law Center. Memorial Service will be held Saturday, June 19, 2021, at 10:30 a.m., at the Ripton Community Church, with burial to follow at Cook Cemetery. Please be advised that due to the Covid-19 pandemic, there are strict guidelines that must be adhered to for the safety of everyone. You MUST wear a mask to be allowed entry to the services.◊