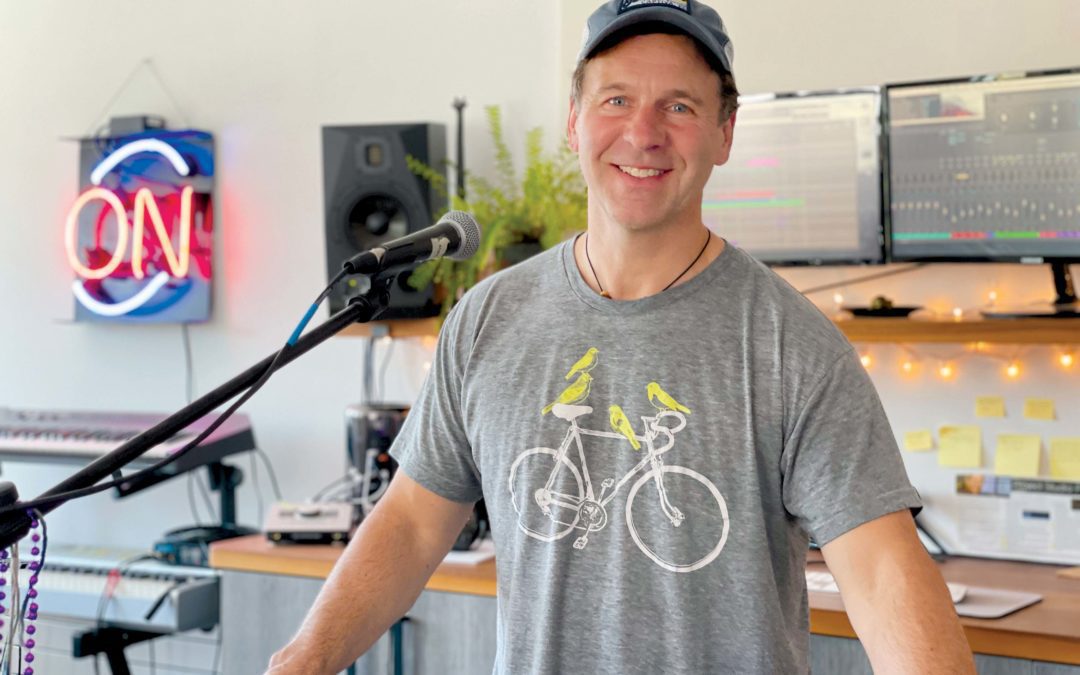 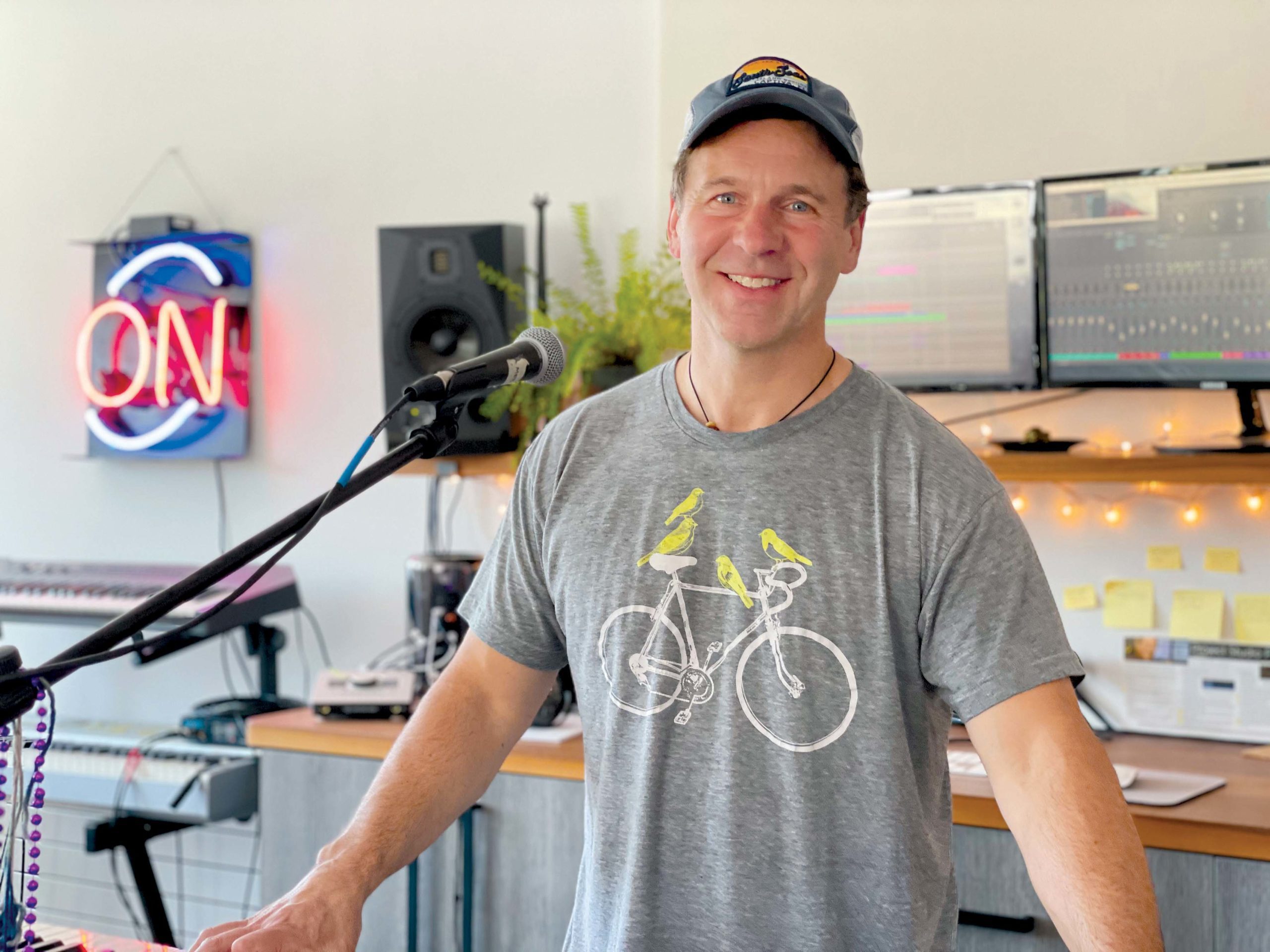 MATT BONNER WROTE and produced “Daylight” — a song and video featuring 20 local musicians. “Daylight” premiered during Porter Auxiliary’s recent online event “Laughter Is The Best Medicine” and is now on YouTube for everyone to see.
By Elsie Lynn Parini

Can you feel it? Spring is tugging us outside, begging us to shed our hats, mitts, coats and — oh, heavens — maybe even our masks. After a year of carefully considering COVID precautions, the promise of vaccines and the nicer weather have many of us grasping for the light at the end of the tunnel.
Matt Bonner — a musician, writer, producer and entrepreneur from Cornwall — has been feeling this way since the New Year when he wrote “Daylight,” a song envisioning “coming back together, hope and connection and daylight.” He recently coordinated with 20 other local musicians to produce a music video that premiered two weeks ago during Porter Auxiliary’s fundraising event “Laughter Is The Best Medicine.”
The roster of musicians includes Andy Nagy-Benson; Deb Brisson; Peter Halby; John Wallace; Matt Wootten; Brad Schott; Bibiana De Souza; Ali Gibson; Matt Longman; Pat Berry; Mike Seaton; Sadie, Lila and Carina Brightman; Joe Capps; Mark Pelletier, Julie Clark, Meredith Visco, Jill Kopel, Annie Rossier and, of course, Bonner himself. Each one recorded themselves performing a section of “Daylight” and sent it to Bonner, who then compiled everything into one cohesive video.
“I collected all the ingredients and then baked the cake,” he said during an interview last week. “Getting everyone’s sound and video footage synced up was definitely a labor of love.”
He wasn’t the only one who liked the process of making the song.
“I really enjoyed being a part of Matt’s ‘Daylight’ project,” said Gibson, a Bristol-based voice coach who comes from a background in opera performance and classical music. “He wrote a song that was fun, approachable and toe-tapping. The challenge for me, which I greatly welcomed, was learning more about the tech side of music making. I have always put off learning this skill. But I’ll take my silver linings where I can get them, and COVID times have forced us all to learn more about engaging with various tech mediums. Learning how to use my newly acquired microphone and interface was a blast, and I loved having this fun project as an excuse to play around with it.”
“So many things that have happened with the pandemic have happened so quickly,” said Bonner, who’s been a life-long musician since he picked up piano in the second grade. “This project has helped people collaborate and learn how to play remotely. Digital performances are a new thing that’ll mature and be a great addition to the music world.”
“Matt Bonner floated the concept of the song and music video to our band in early February, and we were all in,” said Nagy-Benson, who plays drums with Station Mountain Band in addition to being pastor at the Congregational Church of Middlebury. “It was an easy yes. Matt shared an early mix with me, then we did a recording at the church. I knew Matt would pull this off at a high level, but the creativity and technical know-how he brought to this project were incredible. It was cool to be a small part of this.”
“Matt came up with such a creative way to bring people together even though we’re apart,” added Sadie Brightman, a pianist, piano teacher, and founder of Middlebury Community Music Center. “It was such an encompassing vision he had for all of us to be part of making his original song come to life. It was special for my girls to be part of it too.”
This enthusiasm was common in the group.
“We had a pretty deep bench of musicians,” Bonner recognized. “What made it easy is that we were all feeling the same way — we want to come back together and see faces and smiles again… I was unsurprised, but grateful that so many of the people I reached out to wanted to participate.”
The timing worked out really well for Bonner, who also sits on the Porter Auxiliary board.
“We had this event coming,” he said, “and we were looking for something to do that would resonate with our audience… We had the idea for comedians and a musical piece that thematically represented what we’re all feeling, and I said, ‘Well, hey, I just wrote this song…’ and it snowballed from there.”
“Laugher is the Best Medicine” was the first comedy event hosted by the Porter Auxiliary Board, said Board President Gretchen Ayer. The online evening featured Vermont comedians Tracy Dolan and Doug Engel, and then screened the original music and video created by Bonner and friends.
“We hope to host an in-real-life comedy event in the future,” Ayer added. “We all need more laughter and togetherness!”
Ayer reported that the event raised almost $27,000, “thanks to the generosity of our community business sponsors, ticket purchases, and extra donations for virtual items like ‘not buying sparkly shoes’ and ‘I’d give anything for a laugh.’” Ayer also said that they had a better-than-anticipated membership campaign last year.
“The membership campaign raised the funds to pay for the winter COVID-19 testing shelter at Porter in its entirety, so the money raised by ‘Laughter’ will support another community-facing project at Porter that will be determined this spring,” she said.
“It just felt so good for everybody involved to make ‘Daylight,’” Bonner said simply. “The project ended with such a feeling of normalcy and togetherness.”
Ahhh, normalcy and togetherness, that sounds nice. Who knows, maybe it’ll be in tomorrow’s daylight?

Editor’s Note: If you want to see more of Bonner’s work, head online to mattbonner.com. And if you’re interested in making a donation, visit portermedical.org/donate/auxiliary.