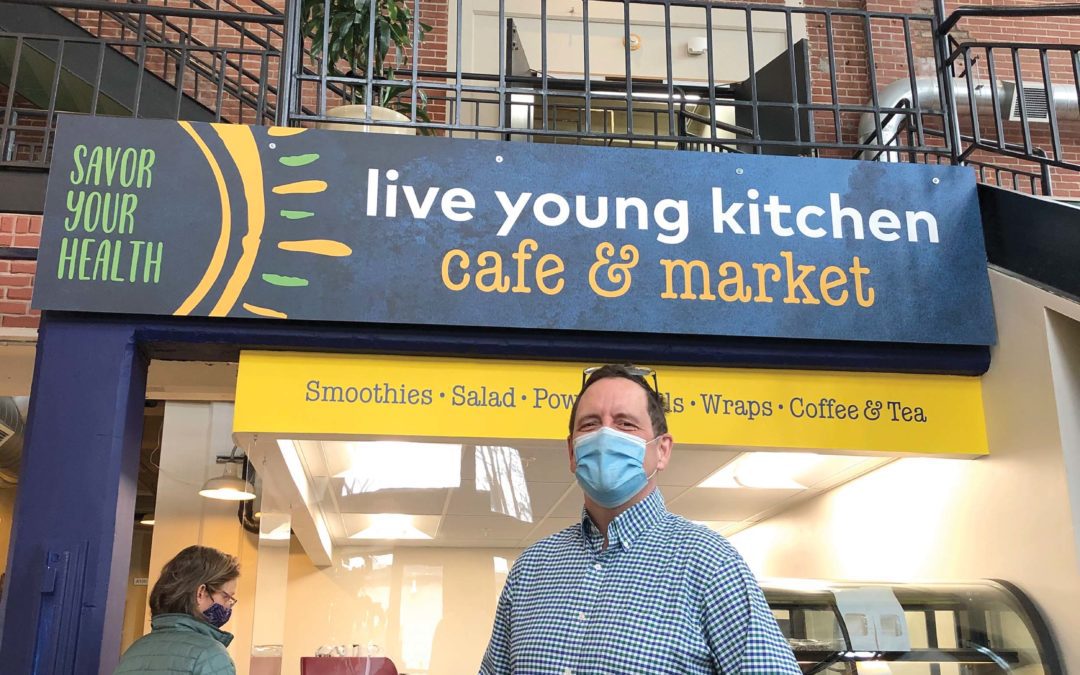 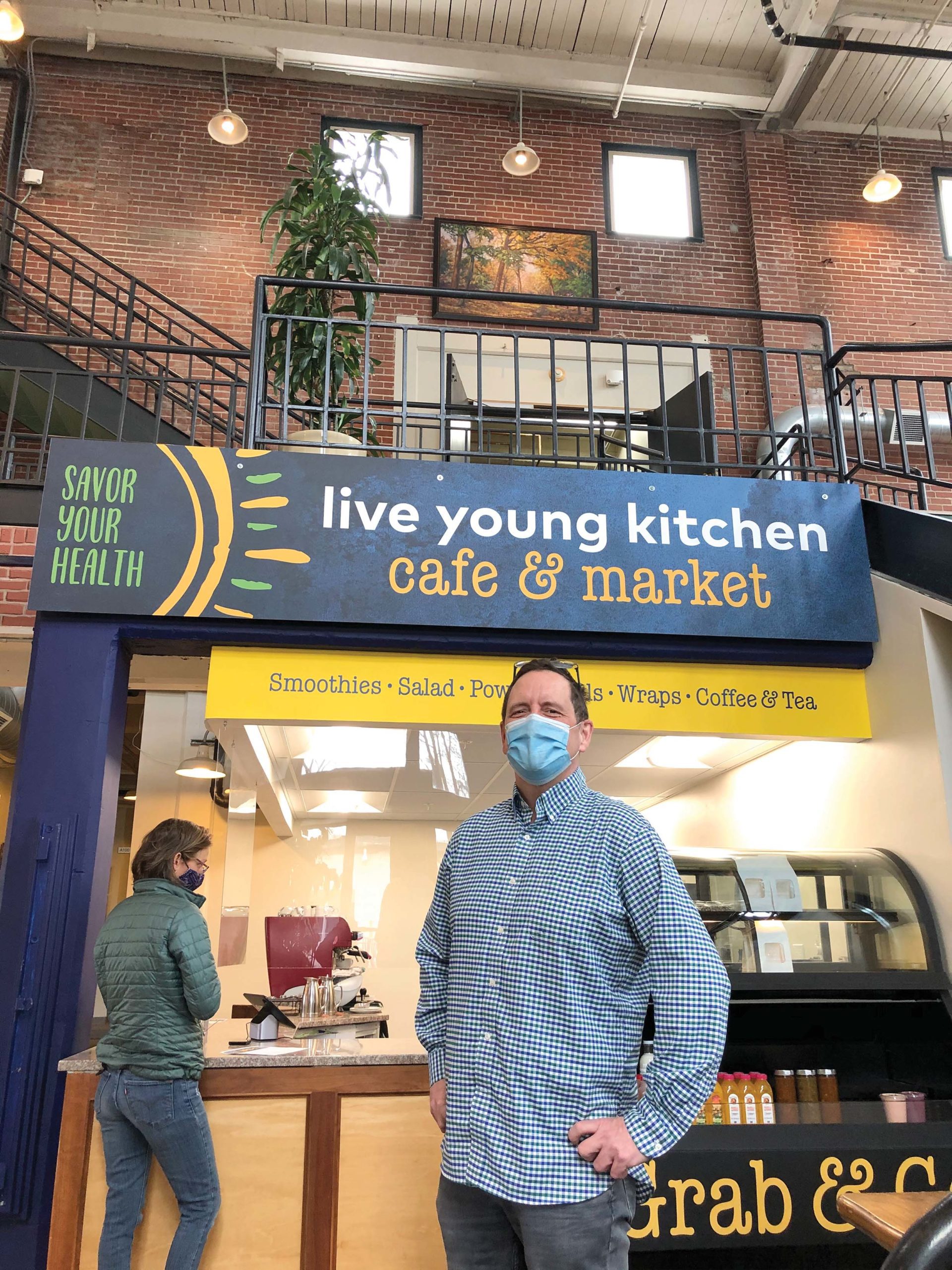 BRAD YOUNG, OWNER of Live Young Kitchen, poses in his two-plus-year-old company’s new café and market home in the Kennedy Brothers building in Vergennes. Live Young Kitchen had already made inroads with its wholesale pre-made healthy organic products before opening this new outlet.
By Andy Kirkaldy

VERGENNES — The roots of the newest café and market in Vergennes can be traced to tragedy and the determination of its owner to make a positive change in its wake.
The business is the Live Young Kitchen Café and Market, which opened on Feb. 15 in the airy multi-level, brick-walled space on the right end of Kennedy Brothers, a North Main Street landmark.
Live Young offers breakfasts of oatmeal, waffle dippers with a variety of berry sauces; lunches of soups, chili, veggie burgers, vegetarian power bowls, and salads; hot and cold drinks; smoothies; and a market section of pasta sauces, salad dressings, hot sauces, condiments, berry sauces and more.
Yes, it is all healthy vegetarian food, said owner Brad Young, a 54-year-old native of Weybridge who now lives in South Burlington. He founded Live Young Kitchen in 2018; until February it was a strictly wholesale operation, and he worked out of a Hardwick incubator.
His products, mostly now produced onsite, have no additives and little or no sodium, and Young uses dates or sometimes a touch of maple syrup as sweeteners, never cane sugar.
“I take a lot of pride when people buy my stuff,” Young said. “That means they’re not buying something that’s less healthy.”

SADNESS AND CHANGE
Young followed a winding road — one that included three deaths in his family — to Live Young. He left Vermont to study at Lafayette College in Pennsylvania, and then sold advertising for a newspaper in Easton, Penn., for five years.
He left that job for similar work at the Newark (N.J.) Star Ledger, commuting from the Jersey Shore, where he lived with his wife, Jill.
At the end of his tenure at the Star Ledger he ran the paper’s classified department, which before the internet “was really a big thing.”
Soon, however, Young read the writing on the wall, or more accurately on the computer screen. Young switched gears in 2013, and moved to Vermont with Jill and their two daughters. He went to work for Dealer.com in Burlington.
Sadly, Jill soon was stricken with brain cancer, succumbing in 2017 after two surgeries.
Not long before that second surgery and Jill’s imminent passing, Dealer.com was bought out and announced a move to Kansas City.
“That was a tough time,” Young said. By then, he had also lost both parents at relatively young ages, his mother at 50 and father at 60.
He decided he couldn’t uproot his two daughters — the elder is now a high school senior. Young also feared for his health and the possibility of leaving his daughters alone.
Things crystallized one day in March 2018, when he went through photos of Jill and himself.
“I saw a picture of really when we first started dating, at 29. And, I’m like, wow, she looks so young there. And then I looked at the guy next to her and I recognized that guy looks a lot younger, too,” Young said. “And at that time I weighed 260.”
He started to think about his parents, and Jill, and his daughters, and the responsibility of being a single parent. Young did some research, and completely changed his diet.
“I realized I was the only parent, so I really dramatically shifted to this way of eating,” he said.
Young now weighs 200.

BUSINESS NICHE
Soon he realized his dietary change meant a time-consuming process of doing virtually everything from scratch every time he cooked. A conversation with Jill’s sister helped him see a business opportunity.
“The downside was it just took a lot of time. You’d have to stop and make all these sauces and do all these things. And my sister-in-law down in Maryland would ask me, ‘Would you cook for me? Because I don’t have time to do that.’” Young said. “She said, ‘You know, I like this food a lot, and I would eat it all the time if I didn’t have to make it.’”
Young soon afterward put the wheels for Live Young Kitchen in motion.
“I recognized I had this problem, and that others may, and that’s really what led me to do that,” he said. “I started the company at the end of ’18 and began cooking early in ’19.”
He started commuting from his then home in Charlotte to the Vermont Food Venture Center, a shared kitchen space and business incubator in Hardwick, to get things rolling.
“They really brought me up to speed quickly,” Young said, particularly on regulatory compliance and mass cooking techniques.
He grew through sales at farmers markets and has slowly been penetrating country and grocery stores.
“One store led to another, and now I’m in close to 40 stores,” Young said.
Kennedy Brothers is one of Live Young’s two cooking sites and its main one. Young also contracts with Barre’s Butterfly Bakery to make his hot sauces.
And now the market and café in Vergennes also allows him to establish a headquarters, fill a health-food niche in the area, creates the ability to expand, and establishes a value-added component to his business.
“With my jar products I try to make it so all you have to do is add the jar food to pasta or rice, whatever you’re using. But here I can actually deliver the end product to someone,” Young said, adding, “And the other part of it was I just loved the space.”
The exterior patio next to the side-door entrance will be valuable, and he can also foresee events and classes inside.
The wholesale side of the business is more established, but even though the pandemic slowed growth, it’s going “really, really well” overall, Young said.
“We’re in 22 more stores already this year,” he said.
Of course, opening a café in a pandemic has its ups and downs, but a good turnout on a sunny March 10 made Young optimistic:
“That was the day where I could say, if that’s where the business is going to stay down the road, that’s going to be a good thing, I can make that work.”