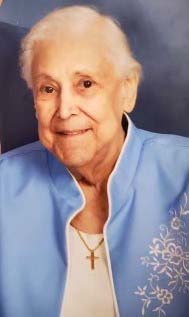 BRISTOL — Thelma Elizabeth Hance, 93, of Bristol, Vt., passed away peacefully on March 18, 2021, surrounded by loving family. She was born on May 29, 1927, in Burlington, Vt., daughter of Rene G. LaCross and Cecilia Rayata.
Thelma made many treasured friends wherever she went. Her kindness drew people to her and many friends became family in her eyes. She always had a giving heart and spirit. She enjoyed reading, spending time with family, and listening to music with her husband, Paul. Thelma was wonderfully devoted to her faith; she drew strength from this often. She truly was a kind and gentle soul.
When Thelma was 17, she met the love of her life, Paul, while ice skating. They were married a few years later in North Carolina, where Paul was serving in the U.S. Army. Thelma and Paul enjoyed 73 years of marriage; their deep faith in each other and God offered them strength throughout their lives.
Thelma took much pride in her working career; she worked at the Howard Bank as an assistant Trust Officer for many years. Once retired, she volunteered on many committees at St. Ambrose Catholic Church and enjoyed traveling to religious destinations with her husband, Paul.
Thelma is predeceased by her husband, Paul E. Hance Sr.; her children, daughter Donna Hance, daughter Sharon Williams, son Stephen J. Hance, and son Paul E. Hance Jr.; and two grandsons, Herman Voigt and Phillip Voigt. She is also predeceased by four siblings; Rene, Pauline, Robert, and Janet.
Thelma is survived by her brother Donald (Keri) LaCross of St. Albans, Vt.; daughter Joan (Halsey) Dunton of Afton, Tenn.; and daughter Christine (Lynn) Willis of Batesburg, S.C. She also leaves behind her treasured grandchildren Cindy, Halsey, Rebecca, Melissa, Donnie, Brian, Jessica and Stephen; and many great-grandchildren and great-great-grandchildren.
A Catholic Mass will be held for Thelma on Wednesday, March 24, 2021, at 11 a.m., at St. Ambrose Catholic Church in Bristol, Vt. Graveside services will be held at a later date.
To send online condolences to her family visit brownmcclayfuneralhomes.com. In lieu of flowers, please consider donating to St. Ambrose Catholic Church food pantry in memory of Thelma. ◊