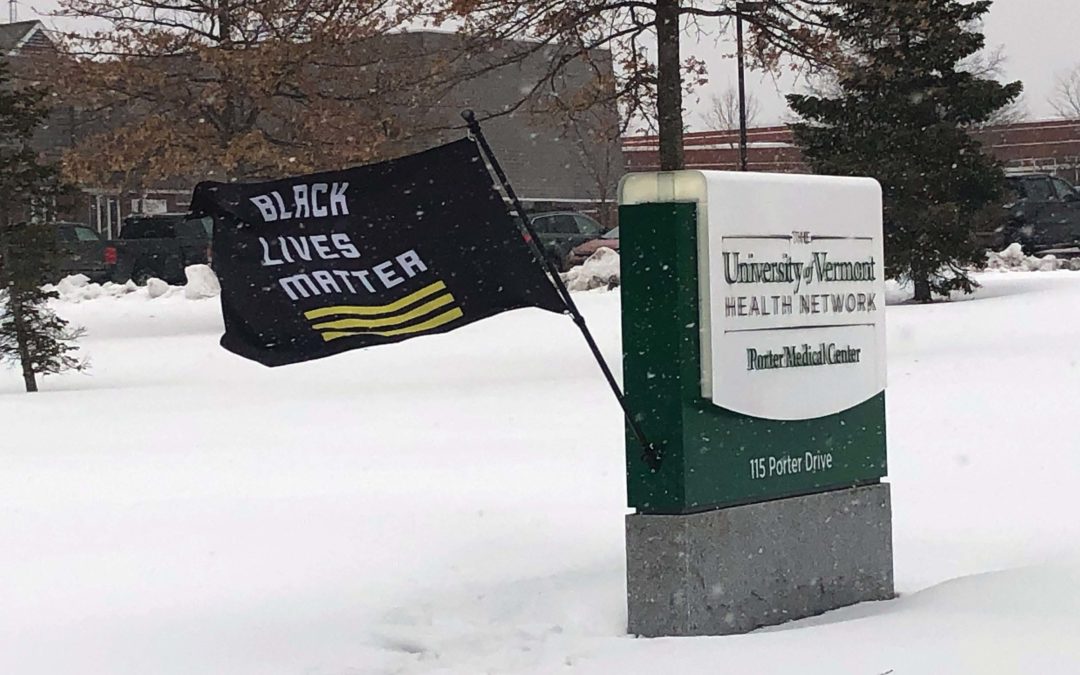 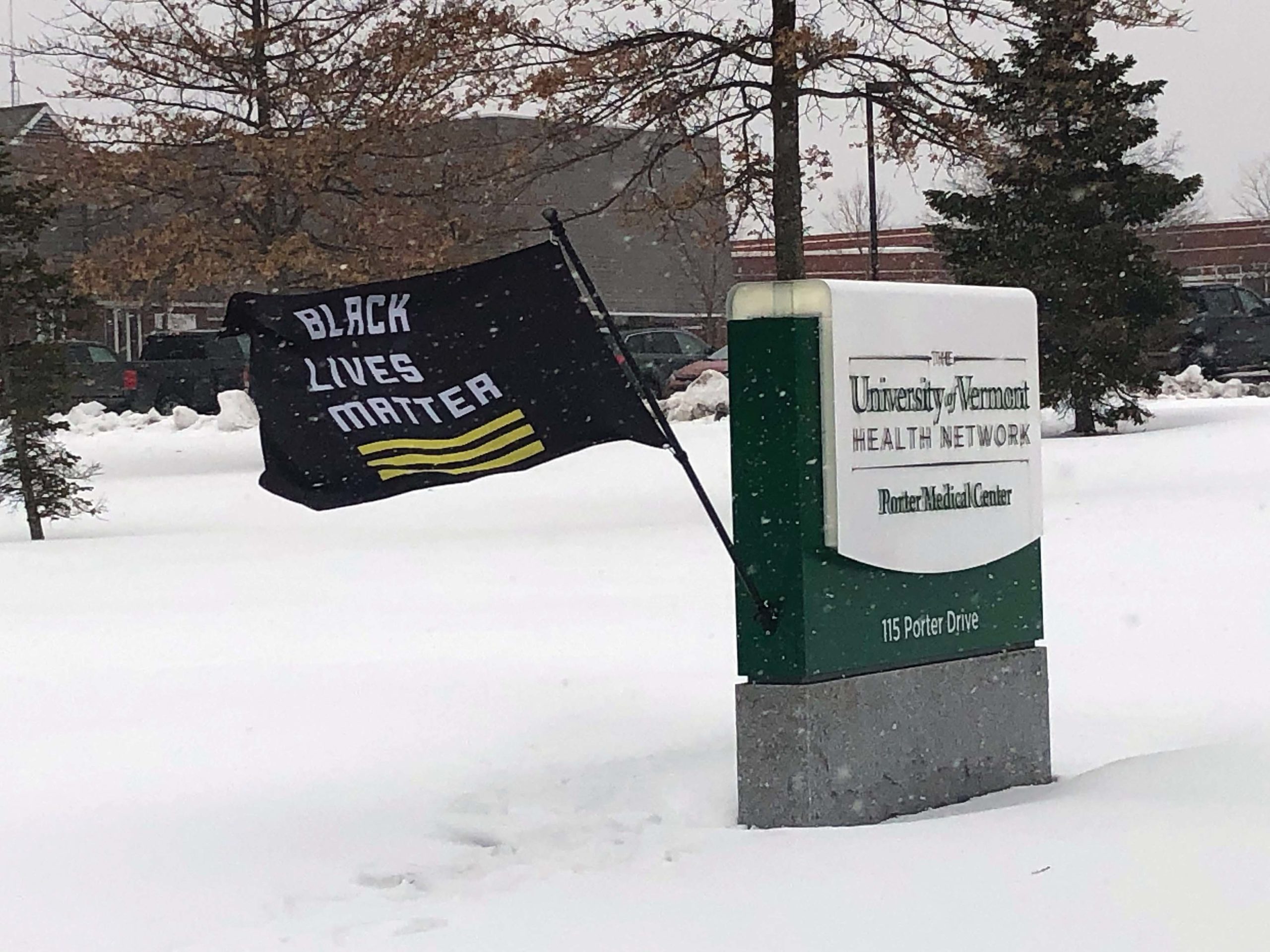 FLYING THE “BLACK Lives Matter” flag is one of several steps Porter Medical Center is making to improve diversity, equity and inclusion at the county’s hospital — not only for its workforce, but also for patients. While the flag might be symbolic, hospital officials said other actions are concrete.
By John Flowers

Stating that Black lives matter is simply asking that Black lives not be undervalued as they have been for centuries in our country. A counter-slogan like All Lives Matter somehow implies that all people experience the same kinds of oppression and to the same degree. This simply is not true. We want to acknowledge that.
— RN Becci Gordon

MIDDLEBURY — Porter Medical Center has created a Diversity, Equity and Inclusion (DEI) Council to help the county’s hospital create a more just, welcoming and responsive place for people of all colors, nationalities and religions to work and receive health care services.
It’s an initiative that started with conversations on the Porter campus a few years ago and has now taken off, joining DEI efforts at all of the University of Vermont Health Network affiliates.
Dr. John Brumstead, president and CEO of the UVM Health Network, stressed the importance of the DEI initiative through an email sent this past summer to UVM Health Network staff. He pointed to national data suggesting “persistent and appalling racial disparities” in health care outcomes — a phenomenon he noted is diametrically opposed to a hospital’s core mission of providing high quality, affordable, accessible care to its entire community.
“We are committed to creating a culture that is diverse, equitable and inclusive for our employees, patients and communities we serve,” he said. “This will be embedded in all strategies and tactics and will ultimately be a part of who we are as an organization.”
Porter’s dedication to DEI improvements is symbolically displayed through a Black Lives Matter flag flying at the entrance to its campus. Porter officials installed the flag at the beginning of this month to “honor the history and lives of those who have been engaged in this work for decades,” reads a statement from Porter.
Plans now call for the flag to remain indefinitely, “as an acknowledgement that this work must continue.” Also in the works is a permanent display in the hospital vestibule welcoming community members into the Porter emergency department and other clinical areas.
Dr. Francisco “Paco” Corbalan and RN Becci Gordon are two of the dozen members of Porter’s DEI Council, which formed last summer in wake of the May 25, 2020, murder of George Floyd, a Black man, by a Minneapolis Police Department officer. Porter Spokesman Ron Hallman stressed the importance of having the DEI project carried out by people on staff who are particularly familiar with diversity and equity issues.
“Relying on people on this council who have spent so much time thinking about this really deeply, and letting them chart the course, is really important to us,” he said during a recent Zoom interview that included Gordon, Corbalan and Dr. Anna Benvenuto, Porter’s chief medical officer.
“As administrators, we tend to want to check things off lists,” Hallman added. “You see a problem, you come up with a solution, you implement it, and then you move on. This is much deeper than that. This is something that needs to be handled very carefully. There’s a lot of emotion and a lot of complexity.”
Informing the DEI project will be results of an employee survey completed by 370 members (around 47%) of the Porter workforce.
Results, still being collated, stem from such questions as, “How comfortable do you feel at work, how much do you think your voice is being heard, and do you feel like you’re welcomed and valued?” according to Corbalan.
But the survey is only a part of the DEI effort. The council is already brainstorming specific actions to promote diversity, compassion and racial justice. For example, some of the council’s recommendations, according to Corbalan, are likely to include more onsite translation signs and phone options for Spanish speakers, clearly posted messages indicating discrimination won’t be tolerated, and efforts to increase the comfort level of transgender people.
“It’s kind of a two-pronged approach we have to take. How do we make this a more equitable place for us to work, and how do we make this a more equitable place to receive health care?” Corbalan said.
Gordon noted Porter — like other health care institutions — is legally obligated to provide services to everyone. But this goal needs to be put into practice. As an example, she pointed out that inclusivity is elusive for “someone who doesn’t speak English and they walk into our hospital and can’t find the department they’re trying to find … We’ve heard a lot from the community we don’t have enough Spanish language access.”

BLACK LIVES MATTER
Gordon hopes the DEI Council can also provide better community understanding of racial justice issues. The BLM flag is a prime example of this. Social media is replete with comments from those arguing “all lives matter,” as if the BLM mantra seeks exalted status for people of color. Gordon explained:
“Stating that Black lives matter is simply asking that Black lives not be undervalued as they have been for centuries in our country,” she said. “A counter-slogan like All Lives Matter somehow implies that all people experience the same kinds of oppression and to the same degree. This simply is not true. We want to acknowledge that.”
Evidence in the health care sphere shows that people of color haven’t had as good outcomes as the white population.
National health care statistics for 2017 released last year by the Center for American Progress showed that:
•  10.6% of African Americans were uninsured and 16.1% of Hispanics were uninsured, compared with 5.9% of non-Hispanic whites.
• 13.8% of African Americans reported having fair or poor health compared with 8.3% of non-Hispanic whites.
•  12.6% of African American children had asthma compared with 7.7% of non-Hispanic white children.
•  42% of African American adults over age 20 suffered from hypertension compared with 28.7% of non-Hispanic white adults.
•  Hispanic women were 40% more likely to have cervical cancer, and 20% were more likely to die from cervical cancer than non-Hispanic white women.
The Association for Community Affiliated Plans released a new report last week that assesses factors contributing to racial and ethnic disparities in the health care system, and it examines the role of Medicaid health plans in addressing them.
Porter’s DEI Council is just the latest in a series of recent racial justice efforts undertaken in the Middlebury area. The Middlebury selectboard in January formed a DEI committee charged with finding a consultant to work with town officials, and the community, on racial justice issues. The board will soon consider a contract with consultants Tabitha Moore and Lisa Ryan, who have already worked with Middlebury police on bias-free policing measures.
Benvenuto is pleased with how Porter’s DEI effort is unfolding.
“I’m really proud of the work the council is doing,” she said. “I think it’s foundational to our community, and it’s acknowledging the ways in which inequities and systemic issues — whether it’s racism or anti-LGBTQ sentiments — have created disparities in health care outcomes. Trying to address that is really important. And we also want to create an organization where people can show up every day being their ‘whole self,’ and feel respected for who they are.”
Reporter John Flowers is at johnf@addisonindependent.com.