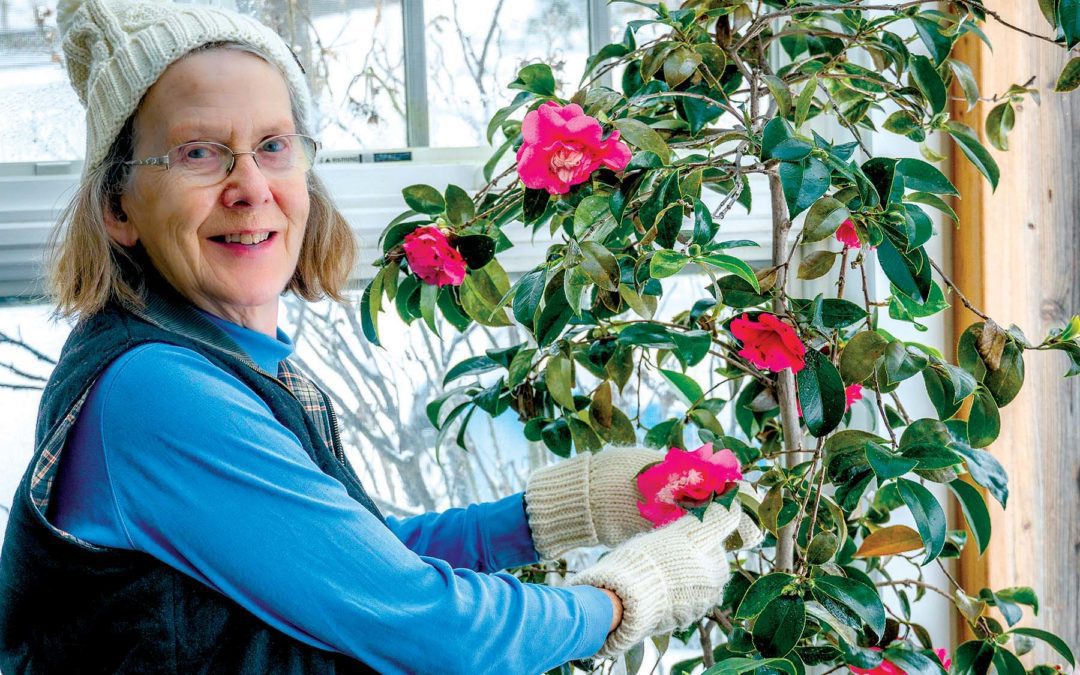 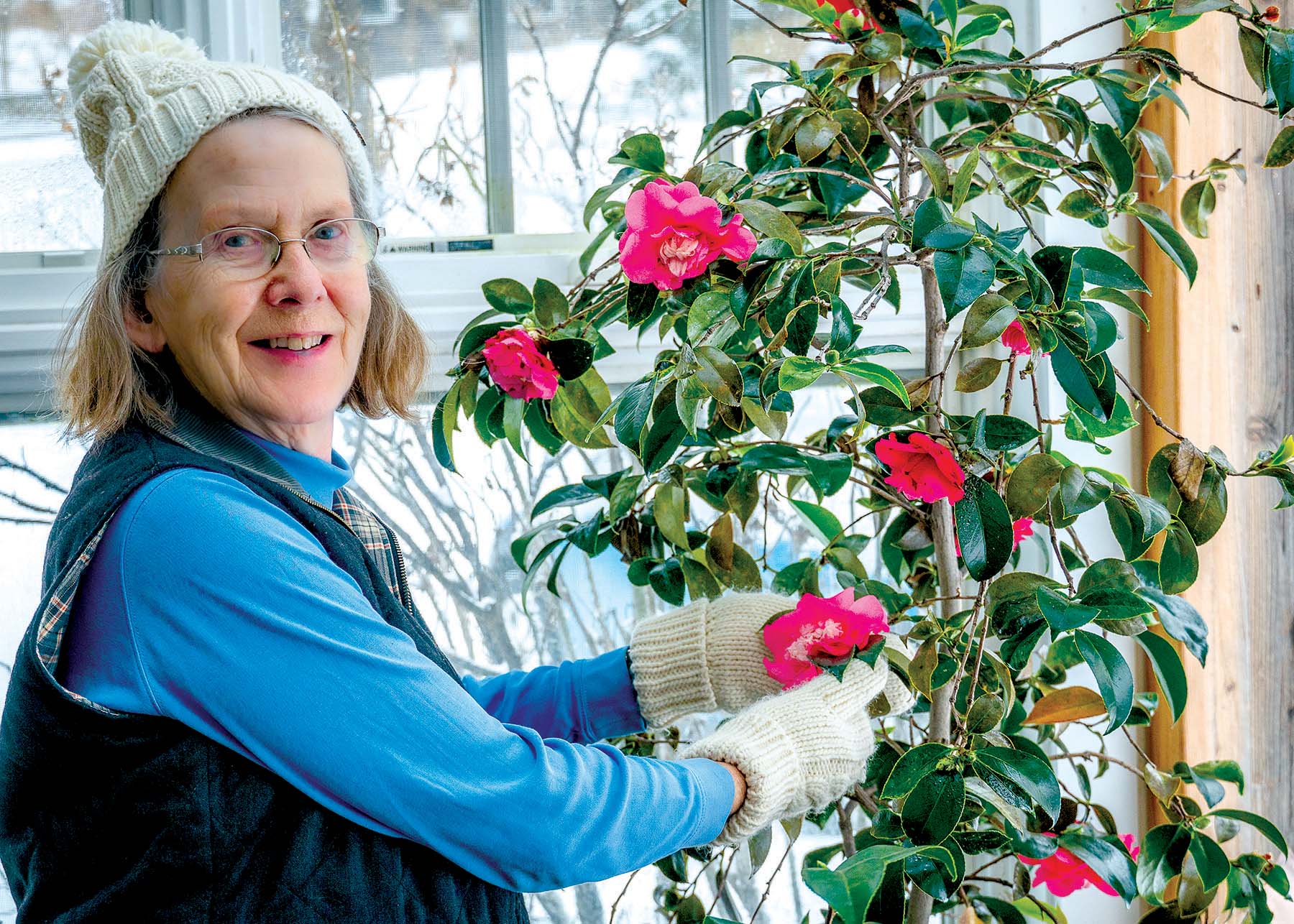 JUDITH WITH ONE of her favorite camellias. Photo by Dick Conrad
By Judith Irven

When people mention a greenhouse, the image that often comes to mind is a vast hooped structure, 150-feet long or more, filled with growing plants, either to yield food or flowers during the coldest months, or alternatively to be sold at garden centers or planted in the fields once spring arrives.
But, for avid gardeners, a greenhouse — sometimes called a sun-room or conservatory — is a far more modest structure, typically attached to the house, where we can enjoy plants throughout the cold snowy months of a Vermont winter.

A COOL GREENHOUSE
My greenhouse is just 18-feet wide and 10-feet deep, built off the southern wall of our house and reached through the dining room. On sunny winter days this ideal orientation creates wonderful natural light and plenty of solar heating.
This beautiful structure was designed and built for us nearly 15 years ago by Vermont Sun Structures, who sadly are no longer in business. However I will describe the key aspects of the design here. And, if you have additional questions, do drop me an email.
One unique aspect of their designs was to install ceiling windows on just the lower portion of the roof. In the wintertime, when the sun hangs low in the sky, the midday sun is able to reach all the way to the back wall and maximize the solar heating. But, by contrast, during the summer, when the sun rides much higher in the sky, even at mid-day it will only reach the front third of the greenhouse, thus reducing the overall solar heating — perfect for the time of year when you need it less rather than more.
The side windows can be opened in the warmer months, providing needed cross ventilation. This ventilation is aided by a large ceiling fan and a thermostatically-controlled exhaust fan.
Heavily insulated walls and thermo-pane windows help maintain the heat in the winter. And, since the floor is made of brick pavers set on compacted drainage stone (plus cut blue-board for added insulation) I can use the hose to water my plants directly onto the floor — a very nice feature.
We choose to set the thermostatically controlled baseboard heat a little above 50F, meaning it is technically classified as a “cool greenhouse.” While this certainly places some limits on our choice of plants — most notably heat-lovers like orchids — it is perfect for growing plants that hail from places where the winters are cool but not cold.
Indeed, if you already have a south-facing sun-porch, by enclosing the space with thermo-pane glass and insulating the walls, maybe you could create a greenhouse similar to ours and enjoy some of these same plants.
So, to give you an idea about choosing plants for a cool greenhouse in Vermont, let me tell you about some that I grow all winter long, up here on the western slopes of the Green Mountains.

WINTER FLOWERING CAMELLIAS — MY PRIDE AND JOY
Camellias are elegant evergreen shrubs, originating in Southeast Asia, that flower in the winter months. Traditionally the leaves of some varieties of camellias were dried for tea making. But, for many years now, plant hybridizers have been breeding camellias to achieve bigger and better flowers — resulting in a bewildering number of cultivars.
Today camellias are grown in gardens where the winters are cool but not cold and there is a decent amount of rainfall all year long, such as in the Southeast and in England.
So I asked myself whether camellias might also do well in our cool greenhouse. I started out by having a long chat with David, one of the owners of Camellia Forest Nursery in Chapel Hill, N.C., about ones he would recommend for growing under glass.
The plants I purchased from him are now between five and six feet high. Most are derived from Camellia japonica and they typically bloom from December to February when their stunning rose-formed flowers, each up to four-inches across, are nothing short of amazing.
My particular favorites are Charlie Bettes with rings of pure white petals framing a central cluster of yellow stamens, and C. M. Wilson with deep pink outer petals surrounding a paler pink center.
Since camellias grow naturally in areas with acidic soil and reasonable rainfall, these are the conditions I try to replicate here. I use a peat-based potting soil formulated for azaleas and plant each shrub in an individual pot that is large enough to accommodate the roots without crowding.
In May, once the weather is reliably warm, I relocate them all outside to a partially shaded spot for the summer months.
Also, since the new flower buds for next winter’s display actually begin forming in late summer, I am mindful to water the pots regularly and deeply when the weather is hot, and also to work some fertilizer designed for acid-loving plants into the top of the soil.
The only problems I have encountered with my camellias are occasional scale infestations, primarily on the leaves. When I spot any invaders I gently scrape them off using a rag soaked in rubbing alcohol, followed with some Neem oil spray (appropriately diluted), paying special attention to the undersides of the leaves.

SMOOTH SUCCULENTS — THE PERFECT GREENHOUSE PLANTS
Succulents — found all across the world in arid areas where rainfall is both infrequent and unpredictable — seem like the quintessential opportunists of the plant kingdom. Indeed, over the millennia they have evolved a variety of interesting techniques that allow them to readily absorb water when it is available and then — in anticipation of dry days ahead — store it in specially adapted tissues.
When the word succulent is mentioned, most people think of cacti, which store water in their swollen stems. Also, to help to fend off would-be predators, the leaves of most cacti have evolved into fiercely sharp needles — a very useful trait in the wild.
But, in the confines of a small space, these needles make cacti extremely unfriendly. So I choose not to welcome any into my own greenhouse. (Actually, for a similar reason, I decided to dump an elegant agave with vicious spines, which I had unwittingly purchased.)
But many succulents do indeed make delightful greenhouse guests. In particular I have had great success with various members of the Crassulaceae family (that includes the sedums we grow in our gardens,) which store water in their thick fleshy leaves.
Crassulaceae is actually a vast family found all across the globe. It includes a very large genus called Echeveria, delightful small plants characterized by thick leaves growing out from their stems to form beautiful rosettes, which originated in the semi-deserts of Texas, Mexico and southward to Central and South America.
I have several varieties in my greenhouse including Echeveria elegans (also known as Hens and Chicks). All are low-growing spreaders that gradually multiply via stem off-shoots.
I use a gritty potting soil (such as one formulated for cactus), water them intermittently and leave them in the greenhouse year round. Initially purchased as tiny plants, they are now large enough to warrant a three-foot wide shallow bowl, where their charming rosettes cover the entire soil surface.
I also grow three other gentle succulents (no spikes or spines allowed), which, since they all have different habits, I grow solo in their own pots:
• An ancient Aloe vera that came from Dick’s family, is an outward growing plant that always seems to be reaching to get outside its 12-inch pot.
• A Jade Plant (Crassula ovata), acquired as a cutting many years ago from a friend, is like a charming miniature tree.
• A Donkey’s Tail plant, (Sedum morganianum) with long stems covered in tiny succulent leaves that grow gently down over the edge of its pot.
The occasional infestation of mealy bugs, which look like a fuzz of white-cotton, is the only real pest problem I have encountered among my succulents. Typically found in hard-to-reach places like in the leaf axil, they can be difficult to eradicate completely, but with a little diligence can be kept under control. I start by gently rubbing the affected area either with a cotton-swab dipped in alcohol, or even just plain water to remove what I can. I then treat the whole plant with insecticidal soap, repeating this weekly.

THE BEST OF THE REST
Our cool greenhouse is also home to other delightful plants, including two large woody herbs — rosemary and bay laurel — both of which I love to use in cooking and which spend the summer outdoors.
Begonias also make excellent greenhouse plants and I have several of the familiar Rex begonias (grown primarily for their interesting leaves) as well as an enormous Surefire Pink cultivar (by Proven Winners).
I also have two plants that bloom towards the end of winter (after the camellias have finished). One is a fragrant Star Jasmine (a gift many years ago from a friend in North Carolina), and the other is a huge Clivia with clusters of pale orange flowers (that was brought from Germany over 100 years ago by Dick’s immigrant grandparents).
And last, but certainly not least, is a prize white azalea, which arrived as a miniature novelty — a Christmas gift from my daughter-in-law about five years ago Checking around I believe it is ‘Bloom-a-thon’ (also by Proven Winners) and definitely not hardy in Vermont.
I have gradually potted it up, and so it is now a small shrub about three foot across. It flowers, on and off, throughout the year and all winter long it makes a wonderful statement in my greenhouse Recently I counted over 40 blooms across the entire plant!
Judith Irven and Dick Conrad live in Goshen where together they nurture a large garden. Judith is a Vermont Certified Horticulturist and garden writer. She teaches landscape design for the UVM Master Gardener program and you can subscribe to her blog about her Vermont gardening life at www.northcountryreflections.com. Dick is a landscape and garden photographer; you can see more of his photographs at northcountryimpressions.com.