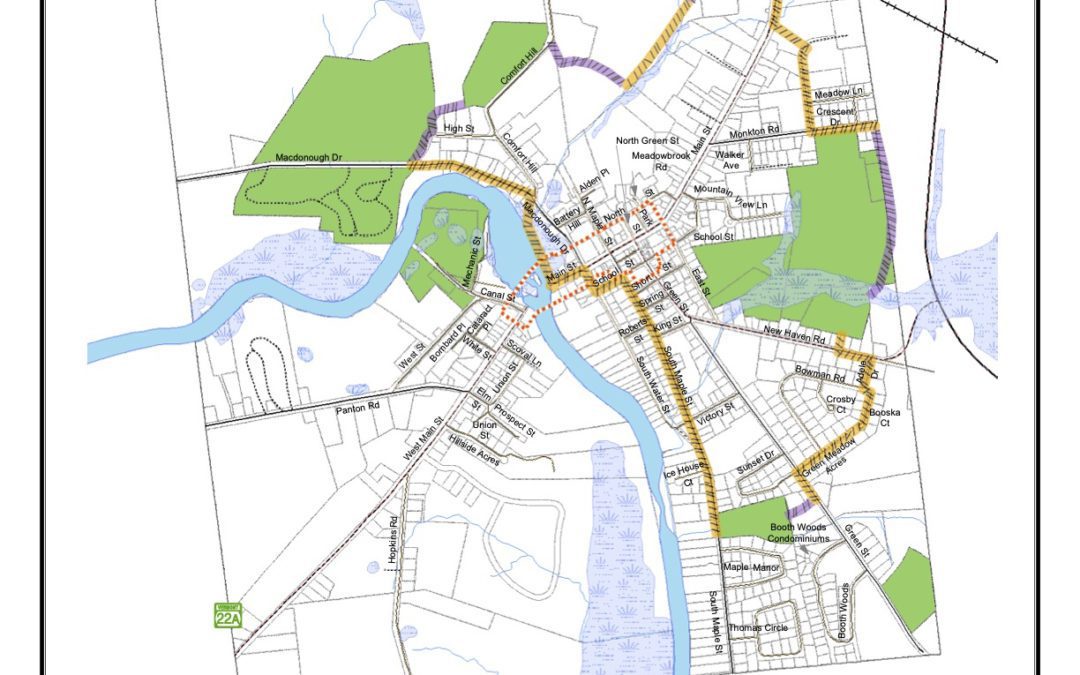 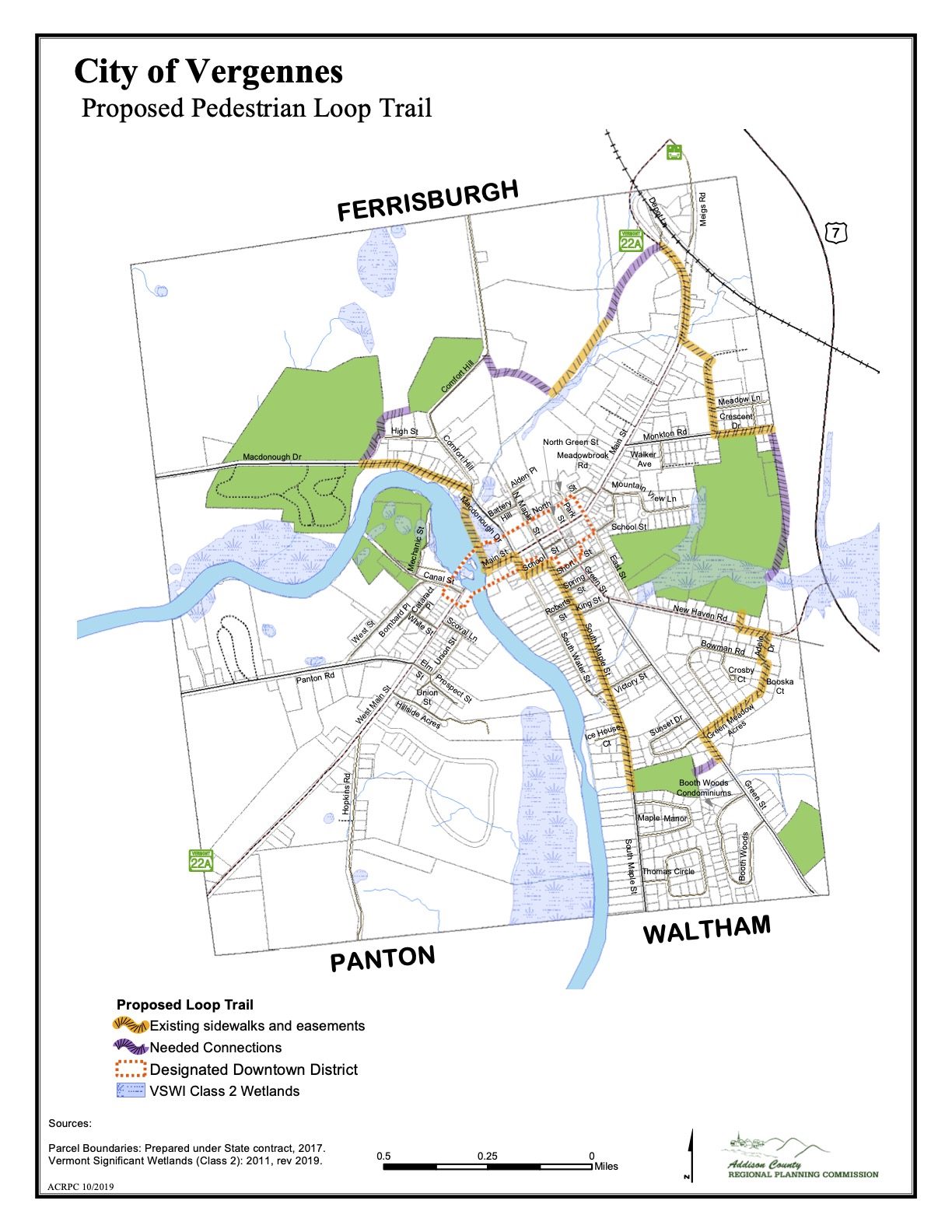 VERGENNES RECREATION COMMITTEE members hope to eventually complete this “Loop Trail,” shown here in the most recent city plan. Missing links are in purple. Committee members are working on several fronts to make those connections, including by seeking grants and rights-of-way.
By Andy Kirkaldy

One of the major things that brings young families into any place, particularly if they have small kids, is recreational opportunities.
— Renny Perry

VERGENNES — The Vergennes Recreation Committee is working on major projects in the Little City.
One is a 7,800-square-foot pavilion over the surface that doubles as an ice rink and basketball court in the city’s main East Street rec park, and upgrading that surface. The other is completion of a trail that would loop through the city and connect almost every city park and recreation area. Pieces of that trail already exist.
The Vergennes City Council heard from Recreation Committee members Tim Cook and Kathy Rossier and Recreation Coordinator Kim Buckley about those projects at the council’s Dec. 15 meeting.
Regarding the pavilion, the council supported a grant application to Ferrisburgh’s Hoehl Foundation to keep progress toward that long-range goal moving forward.
On the trails, Mayor Lynn Donnelly said on Dec. 15 the city would ask Interim City Manager Renny Perry to find up to $5,000 in the city budget to help fund the design for a crucial missing link in that loop.
The council also on Dec. 15 discussed a new recreation committee “charge,” or mission statement. That charge could be adopted as soon as this month once tweaks to its language are finalized.
City officials have reached consensus on most issues, including an increase in committee membership and the most central change: The Vergennes Recreation Committee’s name will soon be changed to “Vergennes Parks and Recreation Committee.”
As Cook, also a city planning commission member, explained, the change is more than symbolic. It means the city’s standalone pool committee will be folded into the rec committee, putting all city recreation and parks under one umbrella for the first time, thus allowing a coordinated approach.
That coordinated approach doesn’t apply to finances, however. Vergennes recreation funding now comes from the Water Tower and Watershed funds; modest general fund support, not all of it directly earmarked for recreation; and grants and donations.
Rossier, now the committee’s chairperson, wants to see more coordination.
“There’s never been a rec budget in Vergennes, and there still isn’t. I’m hoping to see it becoming a department like the police department or the public works department,” he said. “Right now a lot of our money comes from public works, or a lot of our money is found somewhere. It would be nice to evolve into a department.”
Now they and others hope a new charge could be another step, along with Buckley’s hire earlier this year to her 25-hour-a-week post, toward a long-range goal for backers of recreation in Vergennes — a city department that could better coordinate projects like the pavilion and the loop.
Those backers include Donnelly, a former rec committee member. Donnelly said the time is right for Vergennes to make the position permanent and consider a recreation department with its own budget.
Without both, the recreation effort will remain “piecemeal,” she said.
“Unless there’s a director there’s no organization, no point person, to keep the program moving forward. That’s why I think a rec department with a permanent rec director is so important to Vergennes. If we don’t do that, we don’t have a true rec department,” Donnelly said.

DEPARTMENT?
Why is recreation so important to the city?
As well as being good for residents’ mental and physical health, Donnelly said, recreation events can foster community.
“A recreation program is important to keep the community engaged together, bring (together) people that wouldn’t necessarily meet each other or know each other,” she said.
Donnelly and others also said recreation is good for business. They described money for recreation as well spent.
“If you bring a young family in they will stay for a long time and invest more in the community,” said Cook, who led the rec committee since it was founded in 2018, but just stepped down in favor of Rossier. “I definitely think of it as an investment.”
Perry is a former mayor and city manager and councilor not only in Vergennes, but also in New Hampshire and Massachusetts. He’s seen the difference a strong recreation department can make.
“One of the major things that bring young families into any place, particularly if they have small kids, is recreational opportunities,” Perry said, adding, “It can also be a way of getting people into Vergennes because of what we have. And when they come here because of what we have, they generally will spend some money.”
Like Donnelly, Rossier cited “building community,” and spoke about the economic benefits.
“People come to towns with strong rec programs,” she said. “They’re going to spend money buying a sandwich. They’re going to spend money even shopping in the downtown.”

PROJECTS
Meanwhile, the loop trail and the pavilion would both be major additions to the city’s recreation inventory, rec committee members said.
The loop trail is a goal in the city plan. Some of it exists, much of that along city sidewalks (see map).
Starting at the Otter Creek bridge, it runs along sidewalks to Booth Woods, and through Booth Woods to Green Street. A short stretch there needs to be accounted for. It would then run east through more sidewalks to New Haven Road, head a short distance to a city-owned parcel, and then east toward school-owned land known as the “outdoor classroom.”
This is where the $5,000 of city money comes in. It would pay to design a boardwalk needed to cross wetlands on school property, eventually allowing access to the Ferrisburgh Solar Farm along Route 7.
The rec committee will apply for a Vermont Department of Forests, Parks and Recreation grant that would, Rossier said, enhance the outdoor classroom and connect New Haven Road to Monkton Road. Cook added it would provide quicker pedestrian access for many residents to the Shaw’s Supermarket plaza.
Rossier said committee members met with representatives of Ferrisburgh Solar Farm to discuss a trail along its solar farm property. She said it was a “positive meeting,” with more information needed on liability questions.
Moving north, the next key link is land owned by the Addison County Community Trust between Armory Lane and North Main Street that host senior and affordable housing buildings.
A trail already exists between those buildings and the shopping center, and ACCT Executive Director Elise Shanbacker said the organization is willing to look into more.
“We’d certainly consider a (right of way) for the trail network and would welcome the opportunity to collaborate with the Rec Committee on enhancing the area,” Shanbacker wrote in an email.
If that link were established, North Main Street sidewalk could bring pedestrians to the city’s police station, near the head of an old rail trail that leads toward the Otter Creek basin.
Youth Conservation Corps volunteers did work on some of that trail when Perry was city manager more than a decade ago, but other areas would have to be upgraded to allow the trail to reach the new bike park on Comfort Hill. Perry sees it as possible.
“If it’s truly a trail, not a pathway for bikes and everything else, we might actually be able to build it,” Perry said.
The Comfort Hill park could then link the trail to state land, including that occupied by Northlands Job Corps. If a deal could be reached there, Macdonough Drive could close the loop.

PAVILION
The pavilion will also require a long view, not to mention funding. The Vergennes Partnership is writing the grant on behalf of the rec committee. Cook estimated at least three years, more likely five to seven, and possibly 10, before potential completion.
With cost in mind, the project has been divided into three phases, Rossier said. She described them in an email:
Phase 1 would be site improvements at requested grant funding of $286,000, including work to level the site because of a 10-inch dip at one corner that complicates making ice. Work would also include a proper base, replacing the asphalt with concrete, footings for the pavilion, and upgrades to power and water lines. Rossier added, “An improved rink site would be a huge start to moving forward with the complete project.”
Phase two would be pavilion construction for about $337,000, including “design, materials, labor and project management. In-kind donations and volunteer hours are estimated at $20,000.”
Phase 3 (about $47,000) “is for landscaping, lighting, improved warming hut, tables, benches, etc.”
Buckley explained the benefits in an email. She said the pavilion would “be a recreational asset, offering a potential gathering space for various activities such as picnics, parties, school projects.”
She added it would offer offseason storage for basketball and rink equipment, that the ceiling would be high enough for basketball, it would be large enough to allow for three pickleball/hoop courts, and new lighting and the roof would allow use “into the evening hours” and in bad weather.
In discussing the pavilion, Rossier sounded a theme that has been common over the years in discussion of Vergennes recreation — such as pool maintenance and pool house projects, elementary school teacher Robyn Newton’s annual work to install ice at the rink, residents gathering for rink upgrades last winter, and volunteers carving out bike trails on Comfort Hill.
“There were many, many volunteer hours involved in writing this grant,” Rossier said. “Everyone’s lives are so busy, and we are fortunate to have residents who will volunteer their time and expertise to enhance recreation in our greater community.”
Donnelly said volunteerism could be better harnessed by a rec director and department.
“We have a very strong volunteer base. We just have to have someone to direct those volunteers,” Donnelly said.
And Rossier said if Bristol and Middlebury can have rec departments, so can Vergennes.
“Come on, Vergennes, we need this,” Rossier said. “I’m kind of a cheerleader for this, but this is what we need.”