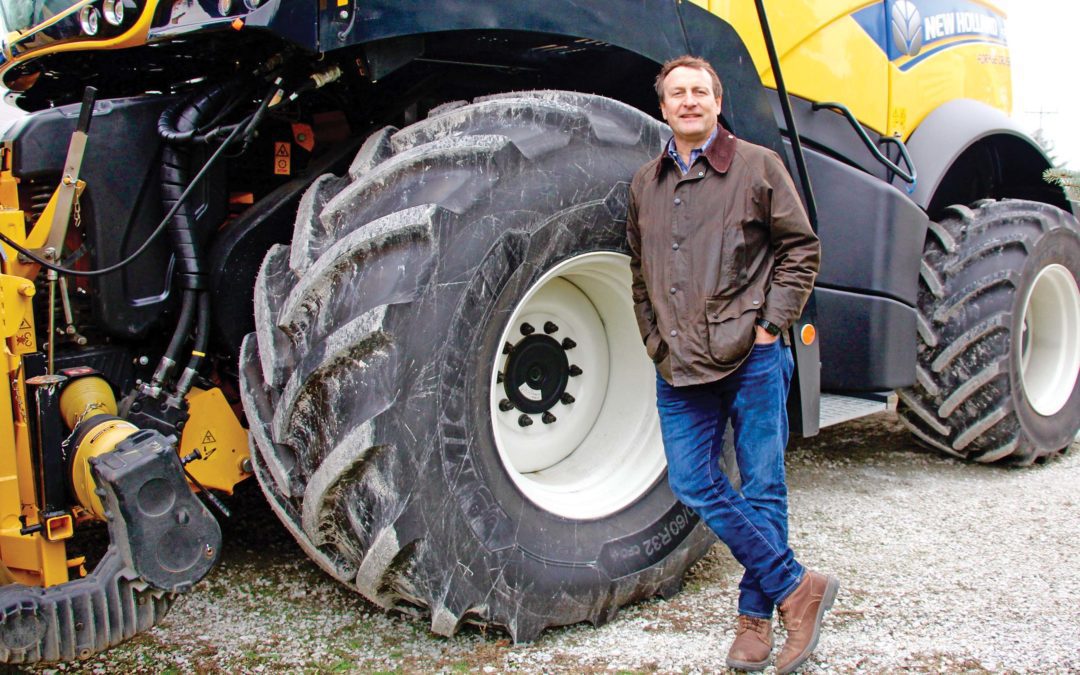 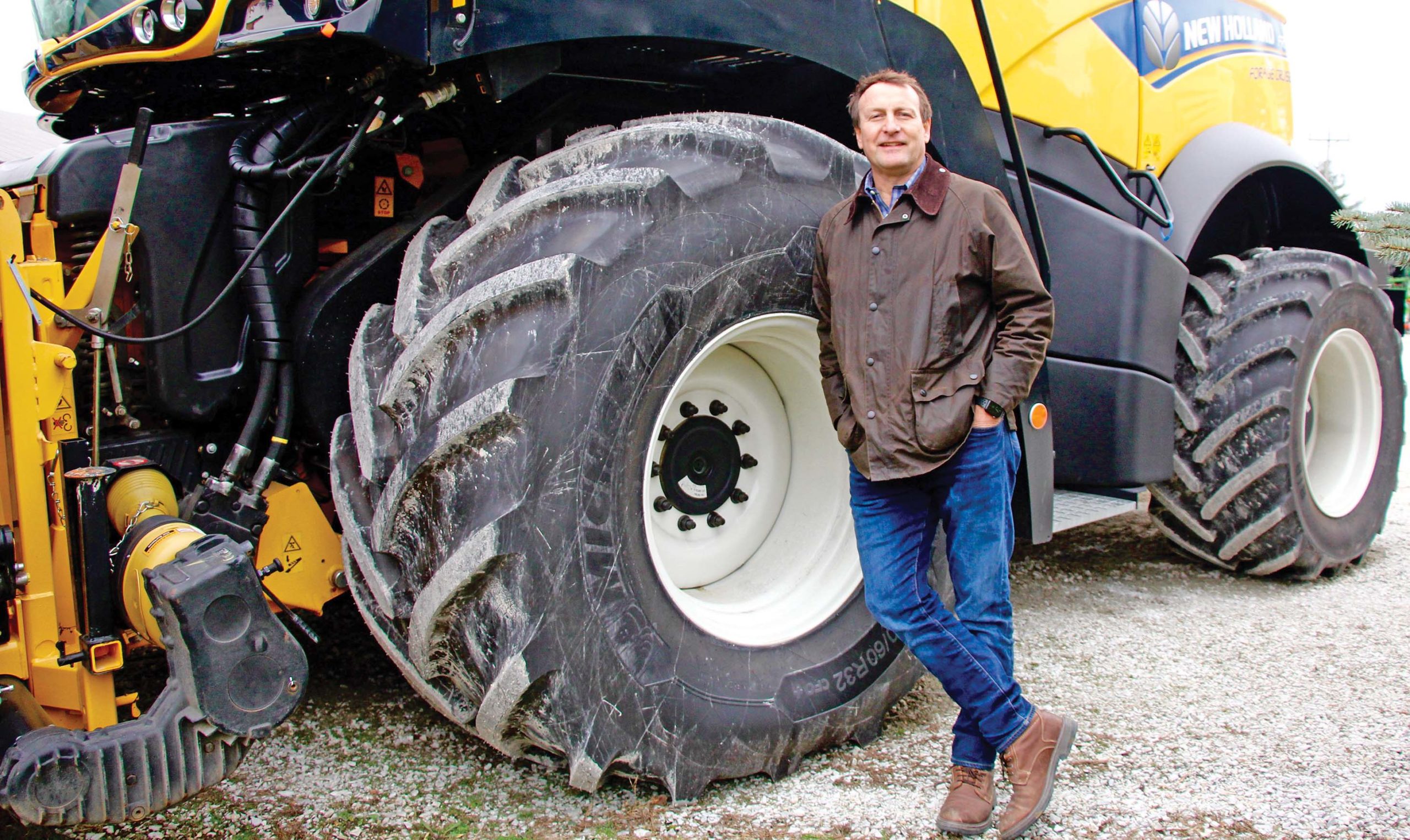 CHAMPLAIN VALLEY EQUIPMENT CEO Brian Carpenter and his colleagues are celebrating the 50th anniversary of the Middlebury-based business, which now has four locations throughout the state that sell farm, lawn & garden, and light construction equipment.
By John Flowers

I don’t see our farm community declining. I see it changing.
— Brian Carpenter

MIDDLEBURY — Thirty years ago, the Carpenter family wasn’t sure if their business, Champlain Valley Equipment, would survive.
World and national events, and a major recession, were creating tough times for CVE and many other businesses.
“At the time, we were having Desert Storm and the economy hit the skids; it became really tough,” recalled Brian Carpenter, the third and most recent generation of his family to guide the Middlebury-based enterprise.
“By 1992, my father (Russell C. Carpenter) was trying to figure out whether he was going to keep going or sell.”
He didn’t, and it turned out to be the right decision, because CVE has blossomed into a four-store dealership business that’s a major force in farm, lawn & garden, and light construction equipment.
It all began back in December of 1970, when Russell C. purchased Middlebury’s Knapp Farm Supply and opened Champlain Valley Equipment as a single-store Ford tractor dealership.
“He and my grandfather (Russell F. Carpenter) had decided he was ready for a career change,” Brian Carpenter said during a recent interview. “He had done agricultural lending before that, and he decided to join my father.”
The original CVE headquarters was on Seymour Street, near where Adams Electric and Danforth Pewter are currently located.
Brian recalled his family spent one year living in a second-floor apartment above the fledgling business. They then moved into a house on East Munger Street.
It was in 1989 that the Carpenters bought a piece of Middlebury College property off Exchange Street that in 1990 would host the new CVE headquarters we see today. The company worked out of rented space across from Foster Motors (on Route 7 South) while the new Exchange Street digs were built.
Celebration of the new location was muted, as the recession suddenly put CVE’s short-term future in doubt. Russell asked Brian — who had left the state for school and a military career — if he was interested in infusing new energy into the family venture.
Brian had married in 1990 and decided he was ready to return to the Green Mountain State. He was up for the CVE challenge.
“I decided I wanted to come back home and raise my family here in Middlebury,” Brian said. “So I took over (CVE) in January of 1993.”
By this time, Brian’s grandfather had retired. Brian was one of 10 employees at CVE, then a Ford/New Holland tractor dealer, that also offered Gehl hay tools.

DOG-EAT-DOG MARKET
Brian successfully navigated the company through choppy economic waters throughout the 1990s that were made more perilous by the fact there were seven different Addison County businesses competing in the local farm implement/equipment market.
“There were too many dealerships, and farm numbers were dropping,” Carpenter explained. “There wasn’t enough market to keep seven dealerships going.”
While other dealerships cut back in response to the tougher economy, the Carpenters looked to expand and thus grab a bigger share of the market. Their opportunity came in 2001, when Reg Bishop agreed to sell Green Mountain Tractor in Middlebury to the CVE partners.
“I knew Reg’s kids weren’t interested in the business, so I approached Reg about buying him out,” Carpenter said. “Over the course of a year-plus, we put a deal together.”
The purchase included the right to sell the New Holland hay tools, Case IH and Kubota brands.
“It brought enough mass of high-end product lines and business, so that the store became quite profitable,” Carpenter said.
“We added quite a bit to our infrastructure here  — a much larger shop, more parts space. We gained efficiencies, and it set us up to be a survivor during what was a very dog-eat-dog market.”
Suddenly, CVE had gone from survival to growth mode.
In 2005, CVE acquired Fine Line Equipment in St. Albans, thus becoming a two-store dealership. It was also during this year that Jason Bessette joined the company as a partner.
Three years later, CVE added Derby Equipment to its portfolio. The then three-store dealership added Josh Provost as a partner.
Yet another opportunity for expansion came in 2012, when CVE acquired Desmarais Equipment, a Kubota and Massey Ferguson dealer in Orleans. The partners consolidated that business and product line within the CVE Derby location. And 2012 would conclude with CVE’s acquisition of Berlin-based Riverside Equipment, a Kubota dealership.
So during his first 20 years helming CVE, Brian Carpenter had taken the company from a struggling family enterprise to a four-store dealership that was named 2006 “Dealership of the Year” by Farm Equipment Magazine.
CVE’s staff has grown to around 100, dealing in a product line that includes New Holland, Case, Kubota, Krone, Bobcat, Polaris, Woods, Landpride, Great Plains, Bandit, Kuhn Knight, H&S, Ventrac, Jamesway, Stihl, Sunflower, Kinze, Manitou, Gehl, FarmiForest.

BIGGER TRACTORS
Carpenter marveled at the way farm equipment has changed during the past 50 years.
“A 100-horsepower tractor was a large tractor in the 1970s; it was $1,000 for every 10 horsepower,” Carpenter said. “Now, tractors go up to over 500 horsepower, and it’s more like $1,000 per horsepower.”
In addition to being a lot more powerful, today’s tractors are endowed with sophisticated computer systems and hydraulics that can help the machines perform most tasks almost effortlessly.
“You have tractors that control themselves in the field; you just need an operator there for safety and oversight,” Carpenter said.
High-tech equipment has required a new level of skill for those charged with repairing or tuning up the machines.
“The knowledge requirements for a tech back then were different it was much easier to train them on the job,” he said. “But now, for a journeyman tech, there’s so much formal schooling required — the understanding of electronics, hydraulics and pneumatics. We’re asking a tech to be able to diagnose and repair this stuff.”
Carpenter has also seen big changes in the farm industry. Some farmers are looking to expand their operations to achieve economies of scale. At the same time, there are opportunities for small-scale operations making specialty ag products.
“Some of it is driven by consumer expectations to continue to have cheap food, as well,” Carpenter noted. “Our federal policy is part of what’s driving this. If consumers want to continue to have a small portion of their income going to food… we have to be very efficient in our production of the food.
“I don’t see our farm community declining,” he stressed. “I see it changing.”
Not every farm can afford state-of-the art equipment, so they have to find a niche.
“A large chopper now, you’re looking at $600,000 to $850,000,” Carpenter said. “To run that with 200 cattle, it’s a lot of debt load per cow, but if you have a couple thousand cows, that keeps the debt load more in check.”
He praised Vermont’s farm-to-table movement, emphasizing local food production.
“We have a nice growth in young people who are producing some phenomenal products,” Carpenter said. “We have some great cheese here in the state, made on small, owner-operated farms.”
And CVE has made sure its range of products are accessible to diverse agricultural operations.
“Really, it’s what attachments you want to go with (the tractor),” he said. “We’ve helped a lot of young farmers become more efficient and keep their costs in check.”
Brian’s grandfather retired from CVE during the early 1980s. His dad step down in 2015, and, sadly, passed away unexpectedly earlier this year.
Brian will turn 59 in February. While he’d like to do some traveling with his family, he has no plans to leave CVE.
“I see myself leading the company for maybe another 10 years,” he said. “I love the business, I love our customer base and I love Vermont.”
Carpenter had no idea back in 1993 that CVE would grow as big as it has.
“We were just looking to have a profitable business and stay within our community,” he said, adding there could be more growth on the horizon for CVE.
“I’ve always been of the opinion that if you’re not trying to grow and develop, then you’re probably falling behind,” he said.
Reporter John Flowers is at johnf@addisonindependent.com.