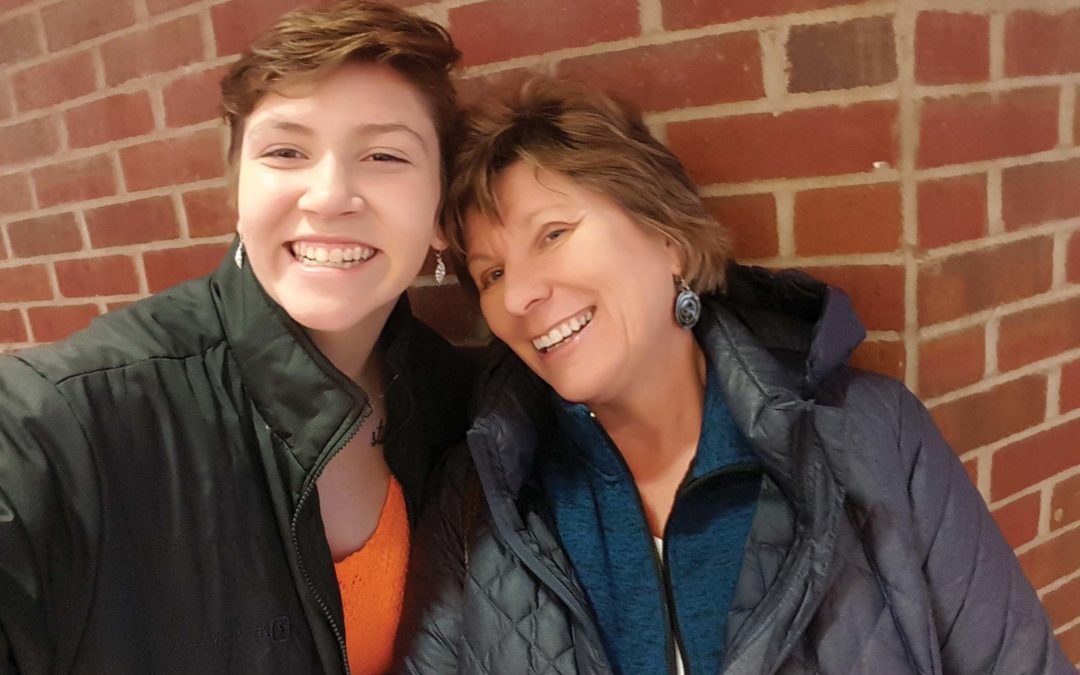 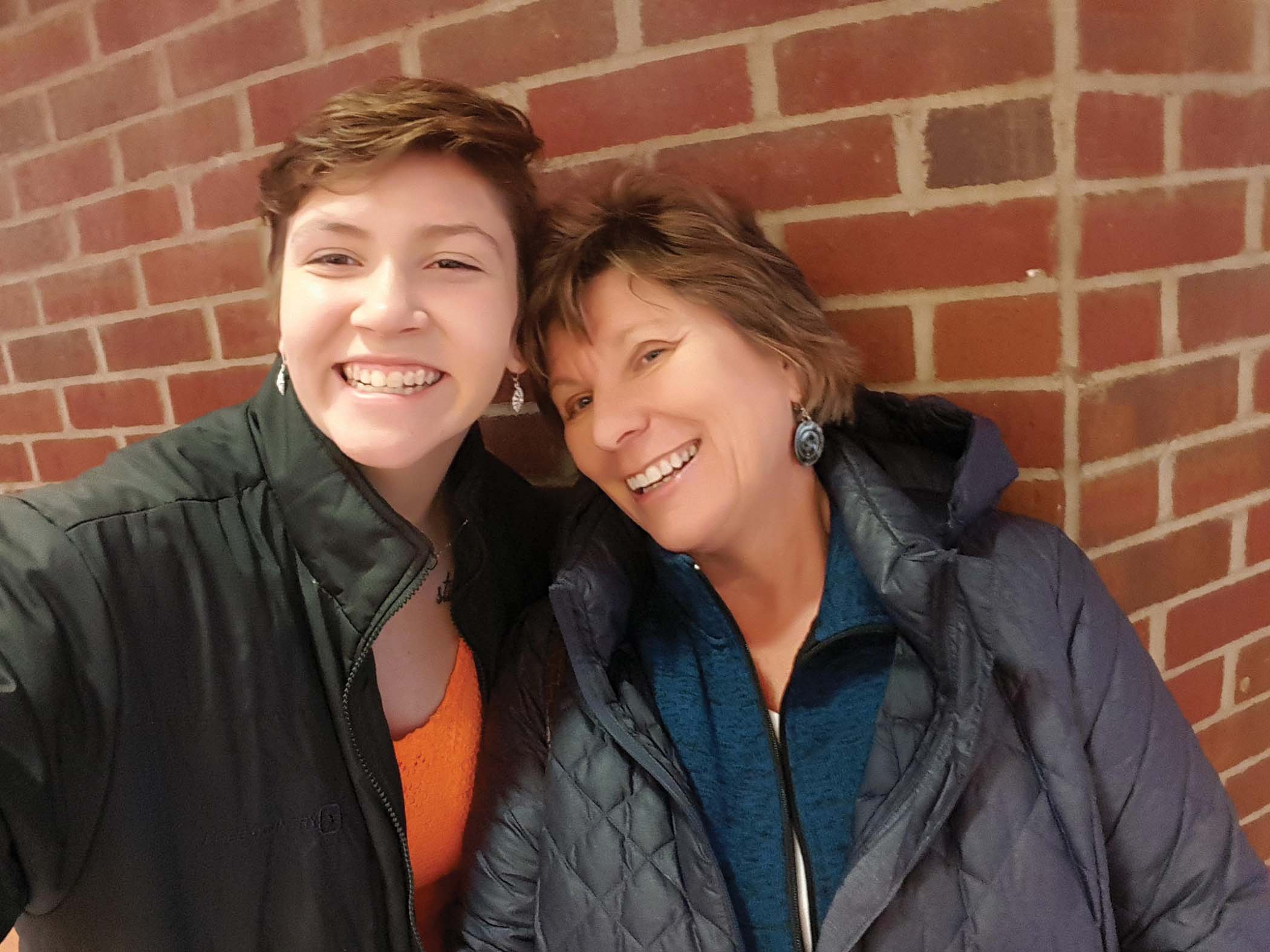 JOANN JARVIS, RIGHT, mentored Justice Green from first grade in South Burlington, through her transfer to Robinson Elementary School in Starksboro, and all the way through middle and high school at Mount Abe. The MAUSD Mentoring Program excels at fostering such relationships between students and community members.
By Christopher Ross

BRISTOL — Joann Jarvis began mentoring Justice Green more than 10 years ago, when Green was a first-grader at the Central School in South Burlington.
For an hour a week, they would spend time in the school eating lunch or playing games.
“We played Go Fish a lot,” said Green, now a first-year college student.
She laughed at the recollection, then paused.
“Having lunch with Joann in school was nice because I often ate lunch alone,” she said. “I didn’t have many friends at Central, and my family was in a different financial situation from many of the other kids. Joann helped with emotional stuff. She was a friend.”
In third grade, Green moved to Starksboro and attended Robinson Elementary School, where a robust and unique mentoring program had been flourishing since 2005. When the program’s director, Amy Johnston, asked Jarvis if she’d like to continue mentoring Green in the new program, she readily said yes.
But Jarvis figured Green would outgrow her one day. By middle school, maybe high school, Green would no longer need her. Maybe she would find her mentor’s school visits embarrassing.
Jarvis, who adores Green, was not looking forward to that day.
“I want you to come see me graduate!” Jarvis remembers Green saying when she was still a youngster.
“But Justice, I’ll be 60 years old by then,” she replied.
“That’s OK,” Green told her mentor. “They have wheelchairs!”
Their relationship, it turns out, persisted through middle and high school at Mount Abraham Union High School.
“As I got older there was less playing games and more just talking, real-life conversations,” Green recalled. “Joann became like a second mom. She was just like always there.”
They continued to have regular lunches at Mount Abe, and Jarvis cheered from the sideline when Green participated in her three sports: soccer, softball and wrestling.
Jarvis, who turned 60 this past June — without the aid of a wheelchair — did get to see Green graduate from high school, though like the rest of the community she had to watch remotely because of the pandemic.

THRIVING PROGRAM
What began as a single-school program 15 years ago eventually expanded to other schools in the entire Mount Abraham Unified School District, whose member towns include Bristol, Lincoln, Monkton, New Haven and Starksboro.
The programs consolidated for the 2018-19 school year, and this year all are running at full speed.
MAUSD Mentors currently has 85 community volunteers from all five towns.
It’s a unique program in Vermont because it’s the only district-wide K-12 community program in which mentor matches can stay together throughout a child’s school career, said Johnston, who now directs the larger program.
Unlike school mentoring programs, where matches can only meet at schools, community mentoring programs like Mount Abe’s allow matches to meet outside of school if they want.
This hasn’t been a particularly easy year for the program, however.
“As you can imagine, because of COVID-19 restrictions, mentoring youth has become more complicated and requires more effort than ever before,” Johnston said.
As a result, mentors have found creative ways to connect with their mentees, Johnston said — playing games and chatting on Zoom, exchanging letters, hiking, kayaking, soccer or picnics.
One mentor took their mentee owl-banding. Another match biked up to Burlington and went swimming.
Jarvis and Green had “car visits” during the final months of Green’s high school career, conversing side by side from their respective vehicles, Jarvis said.
Throughout the year, MAUSD Mentoring typically hosts events such as movie trips, apple picking, pizza and game nights, bowling or visits to the ECHO Center or the Vermont Statehouse, where matches can get together for group fun.
But because of the pandemic those activities have been suspended.
Consequently, “our mentors are going above and beyond during the pandemic to reach kids in spite of restrictions,” Johnston said. “This is particularly necessary now as kids struggle with the uncertainty of our world.”
Mentors’ efforts, she added, have been “truly heroic.”

MENTORING WORKS
MAUSD Mentoring serves primary school students ages 5-13 and secondary school students up to age 18. Mentors and mentees commit to at least one year in the program, and they meet for a mimimum of four hours per month.
Research cited by MAUSD Mentors shows that students who were at risk for falling off-track but had a mentor are:
• 55% more likely to enroll in college.
• 78% more likely to volunteer regularly.
• overwhelmingly (90%) interested in becoming a mentor themselves.
• 130% more likely to hold leadership positions.
“(MAUSD Mentoring) is an excellent program,” Jarvis said.
Green, who now studies early childhood education at Elmira College in New York, is living proof of that.
“I want to be a teacher for little kids,” she said. “A lot of that came from wanting to be there for little kids the same way Joann was for me. I would not have turned out the way I did without her.”
Those interested in more information about MAUSD Mentoring may contact Johnston at amy.johnston@mausd.org.
Reach Christopher Ross at christopherr@addisonindependent.com.