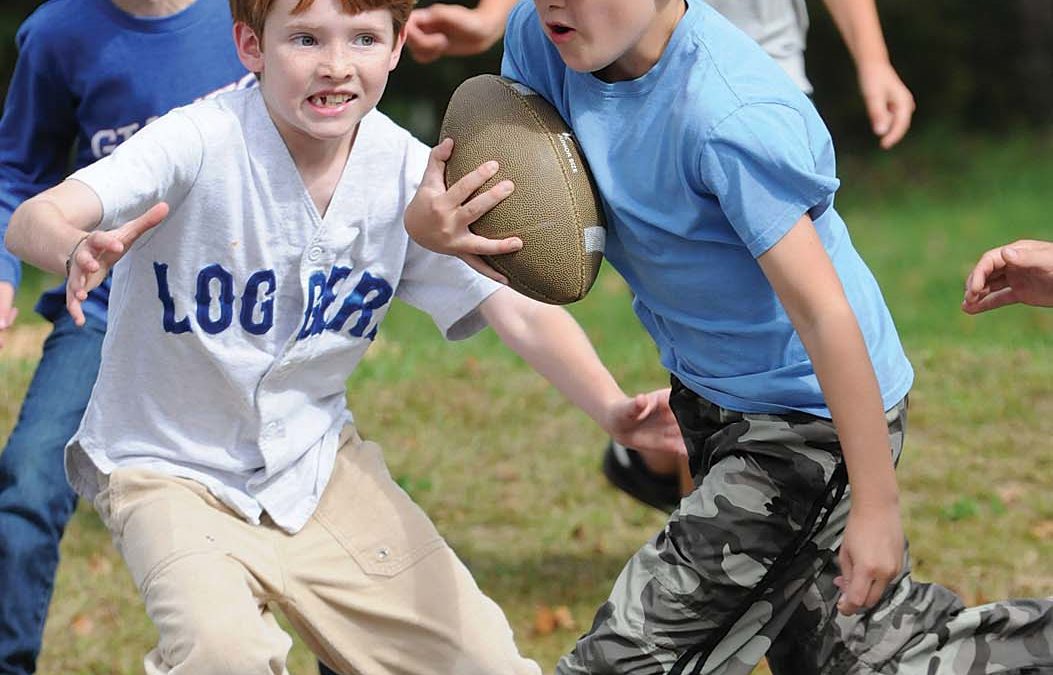 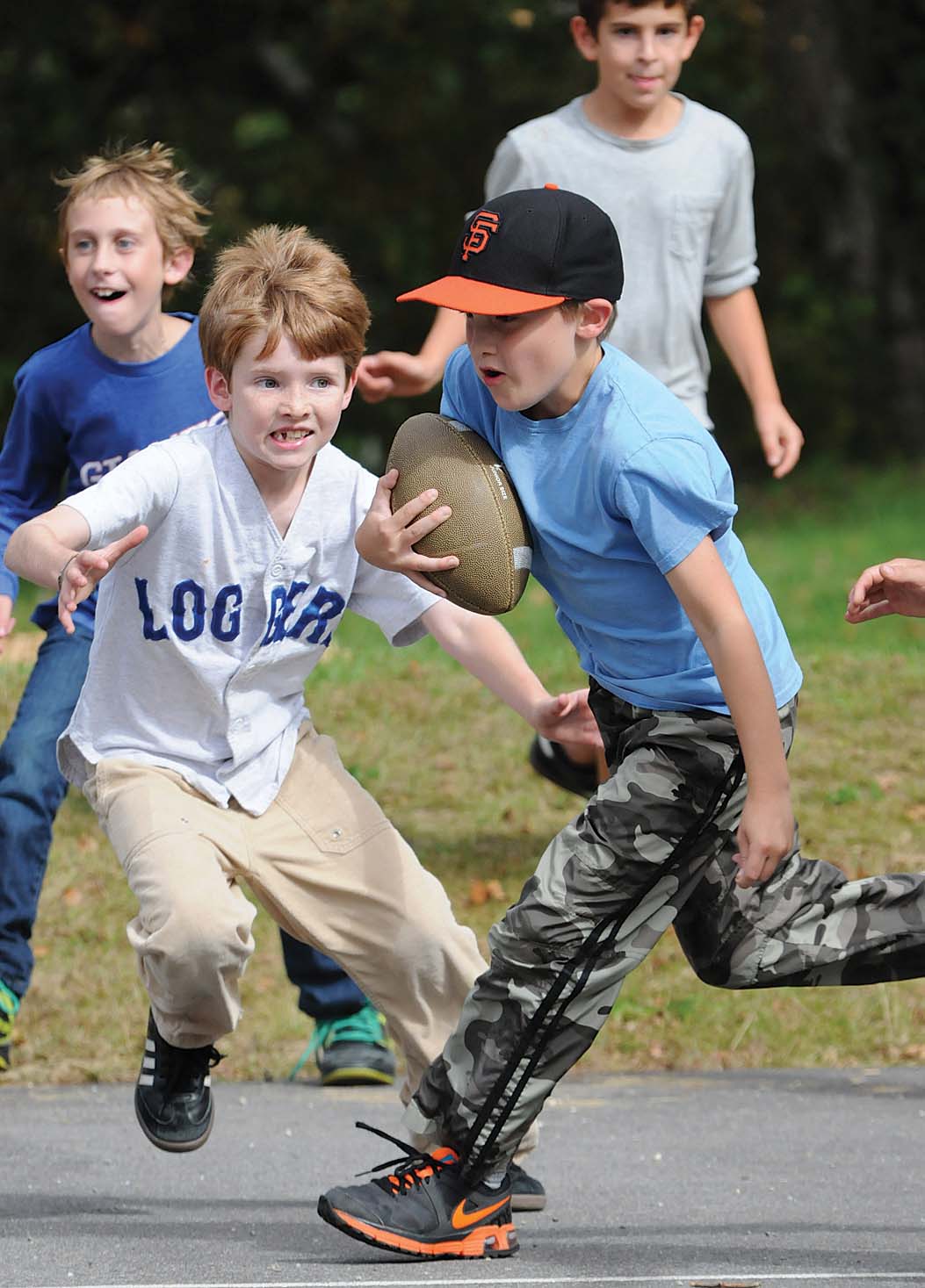 LIKE THE CLASSIC column by Karl Lindholm, this image made by the inimitable Trent Campbell in 2013 is also a classic around the Addison Independent newsroom. It shows Lincoln Community School student Eli Burgess getting tagged by classmates Creed Stilwell and Neil Guy while Dustin Lavigne looks on during a game of touch football at recess seven years ago.
By Karl Lindholm

Editor’s note: This Thanksgiving column by popular columnist Karl Lindholm is an oldie but a goodie. Originally published in 2001 (all the ages are almost two decades out of date) and then again in 2007. It evokes what is in some ways a bygone era, and yet we feel it is also timeless in its appeal to memories of childhood, family and home.
Over the river and through the woods to Grandmother’s house we go.
Driving to Maine for Thanksgiving, I’m thinking about the “Turkey Day Classic,” the annual two-hand touch football game that was played in my neighborhood on Thanksgiving mornings when I was growing up.
Most years, I just watched, too young to play. The core of the teams were the four Finn boys, my cousins, and the seven Clifford boys. There was only one Lindholm boy, the youngest child on the street.
When we moved to Lewiston, Maine, in 1945, we settled in next door to my Aunt Mary, my mother’s sister, and Uncle Jack, and their five kids, on Nelke Place. Only four houses stood on the west side of Nelke Place, a quiet street, not far from the College (Bates) where my dad worked.
Mr. Nelke built each house a little more grand than the last. The Finns lived in the first house, and we were next. The Cliffords lived in the last house, on the corner, and we played the “Classic” in their big yard. Bobby Clifford, the second youngest Clifford boy, lives now in the third house, and has for some time. He’s a judge on the Maine Supreme Court.
At ages 90 and 87, my folks still live at 12 Nelke Place. I have spend many Thanksgivings there — and every single Christmas of my life, missing not a one, a fact which  astonishes my wife, the peripatetic Westerner.
There will be no Classic this year, nor has there been for many years. The Finn boys and Clifford boys, are all old men, more or less, like me. On Thanksgiving Day, we will watch others play football, on TV, before we eat.
Uncle Jack Finn was a great football player at Holy Cross in the 1920s. A huge man, called “the Chief” by his kids, he weighed 16 pounds at his birth. My mother will attest to this fact in a written affidavit.
All my cousins, the Finn kids, were tall: Johnny was 6’6”, Billy, 6’5”, Jimmy 6’2”, Charlie 6’1”, and Mary Jane, pushing 6’0”. They all played basketball at Lewiston High, except Charlie, who played football. Mary Jane had the misfortune to be an athlete before Title IX, but she was vindicated when two of her daughters earned athletic scholarships to Big Ten universities (Michigan and Wisconsin) in soccer.
Johnny and Billy were only a year apart in age and played on the same Lewiston High School basketball teams. In the winter, on days of games, they assembled in the Finn dining room with their friends and teammates, Fern Masse, Paul Buckley, and Freddie Hall, and played low stakes poker. I was occasionally allowed to watch. I recall the brightly colored chips and the banter and horseplay.
All I ever wanted in life, at this stage, was to be a Blue Devil and play sports for LHS.
The Clifford boys I knew less well. They were generally older, unrelated, and lived at the end of the street: Jere, Richard, Bill Jr. (or Bim), Paul, Peter, Bobby, and David: no Jasons, or Bradleys, or last names first. Bill, the patriarch, was a lawyer in town, and three of his sons joined him in the firm. Richard went into the priesthood and became a teacher and scholar.
Alice Clifford, the mother, was a kind woman, who went to church every day, often walking the mile or so to St. Joseph’s Church in the middle of Lewiston. Connie, the only daughter, a lovely young woman, died in her early 30s. My mother once said she thought the Cliffords were the “Kennedys” of Lewiston.
I was happy to watch the Classic from the Cliffords’ lawn until I got to junior high and was invited to play. In the game, no one ever threw me the ball. I was still the youngest. I would ask Jere Clifford, or Billy Finn, the quarterbacks, what I should do on the play they had just diagramed on their palms. “Stay in and block,” they’d say, or “go long,” or “get open in the flat.”
“Billy, I was wide open,” I’d complain, after the play.
“Sorry I missed ya,” he’d apologize. “Do it again.”
In the game itself, creativity was highly appreciated. It was all forward passes, laterals, ends-around, Statue-of-Liberty plays. Blocking was allowed, but too much exuberance while blocking was discouraged. There were many entertaining arguments.
One year, my friend Bobby Lux, the son of the athletic director at Bates, was allowed to play. He was a good athlete, precocious, and he starred in the game, catching passes and running wild, while I stayed in and blocked or got open in the flat. I found his play an almost unforgivable act of betrayal and was furious. He lived on Mountain Avenue, not Nelke Place!
In fact, I quickly forgave him. He was a nice boy, a year older, and popular in school. Besides, he went out with the beauteous Suzanne Gagnier, and I was pleased just to be in their circle. Poor Bobby never got a chance to star for the Blue Devils: after his freshman year at LHS, his parents exiled him to Andover Academy.
This year, we will drive from Lewiston to have dinner with my sister in Brunswick. She has two grandchildren almost exactly the same age as my kids, the two most recent ones. My dad and I will watch some football with Jim, my brother-in-law, the fisherman, who coached football at Bowdoin for 13 years, while the little kids play in the living room.
I hope your Turkey day this year is a classic too.