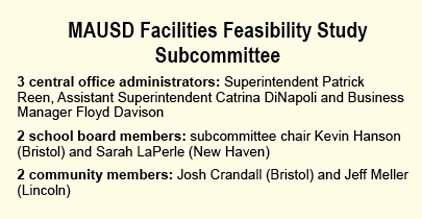 For me, the notion of a ‘town school’ has been a real stumbling block to this entire process.
— Josh Crandall

BRISTOL — After months of deliberation, a Mount Abraham Unified School District committee has narrowed down a wide range of building closure options and will soon make a formal recommendation to Superintendent Patrick Reen.
Like many of its Vermont peers, the MAUSD has been struggling with declining enrollment, which reduces the Bristol-area district’s income from the state. It also faces increasing costs, especially those related to employee health care.
Reen has projected that MAUSD annual budgets could exceed state-mandated spending thresholds by millions of dollars in coming years, resulting in costly penalties and skyrocketing tax rates. He has suggested the district could save millions of dollars a year by consolidating students into fewer school buildings.
With this in mind, the school board created the Facilities Feasibility Study Subcommittee (FFSS) earlier this year to serve as an advisory resource for Reen, who is scheduled to make a final recommendation to the school board next month.
“I think the subcommittee did a good job getting up to speed with the complexity of our fiscal challenges,” said Reen, who is also a member of the subcommittee, in an email to the Independent. “After much deliberation and some healthy divergent thinking they came to consensus around three options they think I should consider much more closely.”
The district commissioned NESDEC (New England School Development Council) to produce a demographic report this summer, which concluded that declining enrollment will likely be a long-term phenomenon. As previously reported, the NESDEC report outlined a number of possible facilities options, including merging with the Addison Northwest School District.
The FFSS divided all the possible school closure options into three “buckets”:
•  keeping all schools open (this wasn’t really a bucket so much as a one-item category).
•  closing some schools.
•  closing some schools and merging with ANWSD.
At its last meeting, on Nov. 2, the subcommittee agreed to recommend the following options to Reen:
•  Operating six schools: keep Mount Abraham Union Middle/High school and all five elementary schools — in Bristol, Lincoln, Monkton, New Haven and Starksboro — open.
•  “Charge Scenario II A”: close three elementary schools among those in Lincoln, Monkton, New Haven and Starksboro, and host grades 6-12 at Mount Abe.
•  “NESDEC Option B”: Close three elementary schools, merge with the ANWSD, and dedicate either Mount Abe or Vergennes Union High School as the new district’s middle school, and the other its high school.
According to the MAUSD articles of agreement, only the voters in the town hosting a school have the authority to close that school. Revoking that authority would require changing the district’s articles of agreement, which would have to be voted on by the entire district, but this is not an option the school board has said it would be willing to explore.
A final report from the subcommittee is forthcoming, but Reen said at the meeting he has what he needs.
“Listening to their perspectives and hearing their thinking has been very valuable to me as my thinking evolves leading up to making a recommendation to the board as they have directed me to,” Reen told the Independent.

WINNOWING CHOICES
Committee members spent nearly three and a half hours on Nov. 2, working through a set of bullet points toward their final recommendations.
During a discussion of the advantages to kids and towns of keeping all elementary schools open, Josh Crandall, who lives in Bristol, said it all comes down to transportation.
“For me, the notion of a ‘town school’ has been a real stumbling block to this entire process, because we are not providing less service (by consolidating), we’re providing more services potentially, and we are part of the 5-Town area, which is still part of this community,” he said. “Yes, it’s a little bit longer of a drive (but) people have been going to Bristol to get their pizza since as long as I’ve lived here in the 5-Town area. We go to the Fourth of July celebration at Mount Abe. A lot of people go to New Haven to jump into the river…. So I find it really challenging to conceive of the ‘town school’ and to start the conversation there.”
During a later discussion about schools being the “glue” that hold towns together, a concept neither committee members Kevin Hanson nor Crandall seemed convinced by, Sarah LaPerle questioned whether it really affected the students.
“I think it … comes down to the heart of the story, which is you actually have to vote to close something that you don’t really have that many negative things to say about, and so how to emotionally wrap your head around that is pretty tough,” she said. “You’re really not able to articulate why, except I don’t want it to be gone…. I don’t know. The kids aren’t voting.”
“Right,” said Crandall, “so this is all the parents.”
“Or people who’ve lived in a town for a long time and it’s important to them, and it’s part of their identity, and I appreciate that,” LaPerle said. “But I don’t know if it’s an advantage to kids.”

FINANCIAL IMPACT?
Subcommittee member Jeff Meller was not able to attend the latter portion of the meeting, but in a Nov. 5 email to the Independent, which was cc’d to Reen and MAUSD board chair Dawn Griswold, he said he would have voted “no” for all of the choices.
“Not because I opposed all the choices,” he explained, “but because we have received no financial information on any choice. So there is no basis on which to make a choice.”
There was no discussion at the Nov. 2 meeting about the specific financial implications of one school closure option versus another, although Reen did say he believed there were consolidation options that would not require major construction projects to implement.
But financial discussions were supposed to have happened, Meller said, and indeed, the school district has been telling residents that they arehappening.
“The Board expected the sub-committee to give Patrick perspective on 18 Essential Questions,” Meller said. “In June the sub-committee reduced its charge to only 3 Essential Questions. All questions of cost, ‘Dollars’ in Bucket No. 2, were removed from our consideration.”
Yet the second of three planned video “MAUSD shorts” (Oct. 12, tinyurl.com/y6ptvznk), claimed that the subcommittee is “considering … operating, maintenance and renovations costs of each building,” Meller pointed out.
And “at the Oct. 12 (special board) meeting the board was told that the sub-committee is ‘Working on two activities — one is the charge questions re: logistics and costs,’ ” he continued.
“In a financially driven restructuring, it was perplexing that the sub-committee charged with considering the financial ramifications of restructuring alternatives was given no financial information,” Meller said. “One would have expected, or at least I did, that before we considered closing elementary schools the sub-committee would have evaluated every conceivable change which might be made in our local elementary schools to keep them open. In fact the sub-committee never considered this question.”
Starksboro resident Herb Olson expressed similar concerns at the end of the subcommittee meeting.
“I’m just concerned that because you guys narrowed it down to one option (per bucket) … if (Reen) accepts that, we’re really not going to have a robust discussion about the options and we’re not going to have the financial information needed to really kind of sort out what’s best for our students’ education.”
Community resistance to school closures has begun manifesting itself in towns where residents believe their schools will be targeted.
This week, Lincoln residents Devon Macleod and Maureen Rotax encouraged their neighbors to sign an open letter to the town selectboard and to MAUSD officials, opposing the closure of Lincoln Community School.

TIMELINE
•  Dec. 7-11: Reen is scheduled to make a recommendation to the school board.
•  Dec. 9-30: school board community engagement.
•  Dec. 30-Jan. 13: community survey on Reen’s recommendation.
•  Jan. 21-30: the window for warning a vote on school closure.
•  March 2: Town Meeting Day.
“I think it’s pretty heartbreaking to have to vote,” LaPerle said at the Nov. 2 meeting. “I think that part’s going to be a challenge.”
Reen agreed:
“It’s heartbreaking to have to make a recommendation.”
Reach Christopher Ross at christopherr@addisonindependent.com.