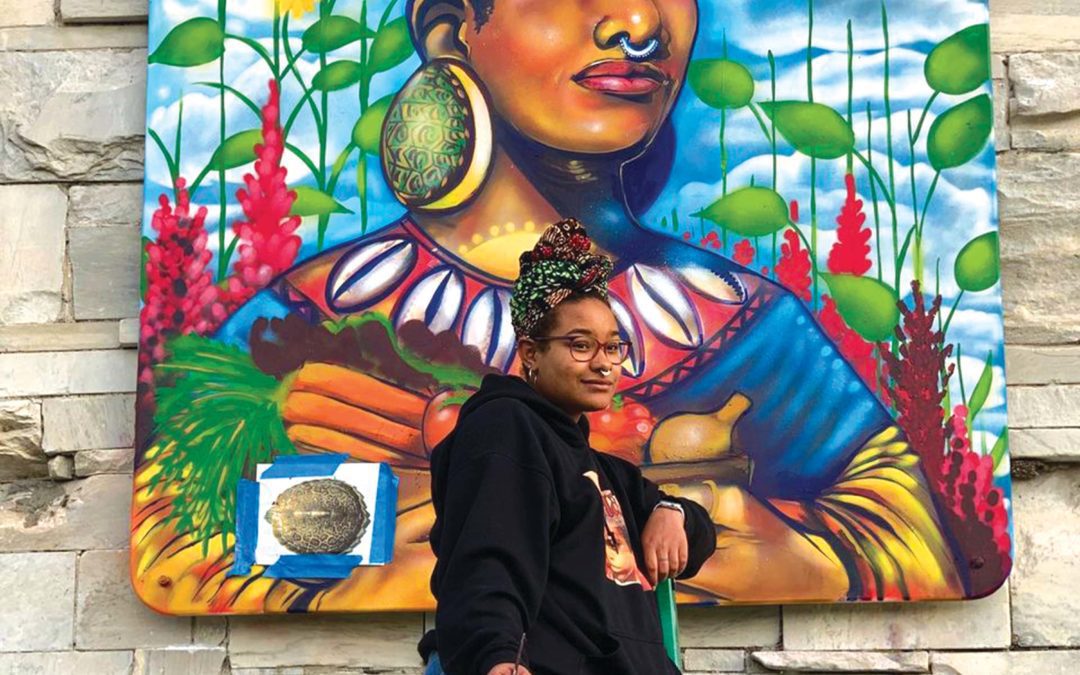 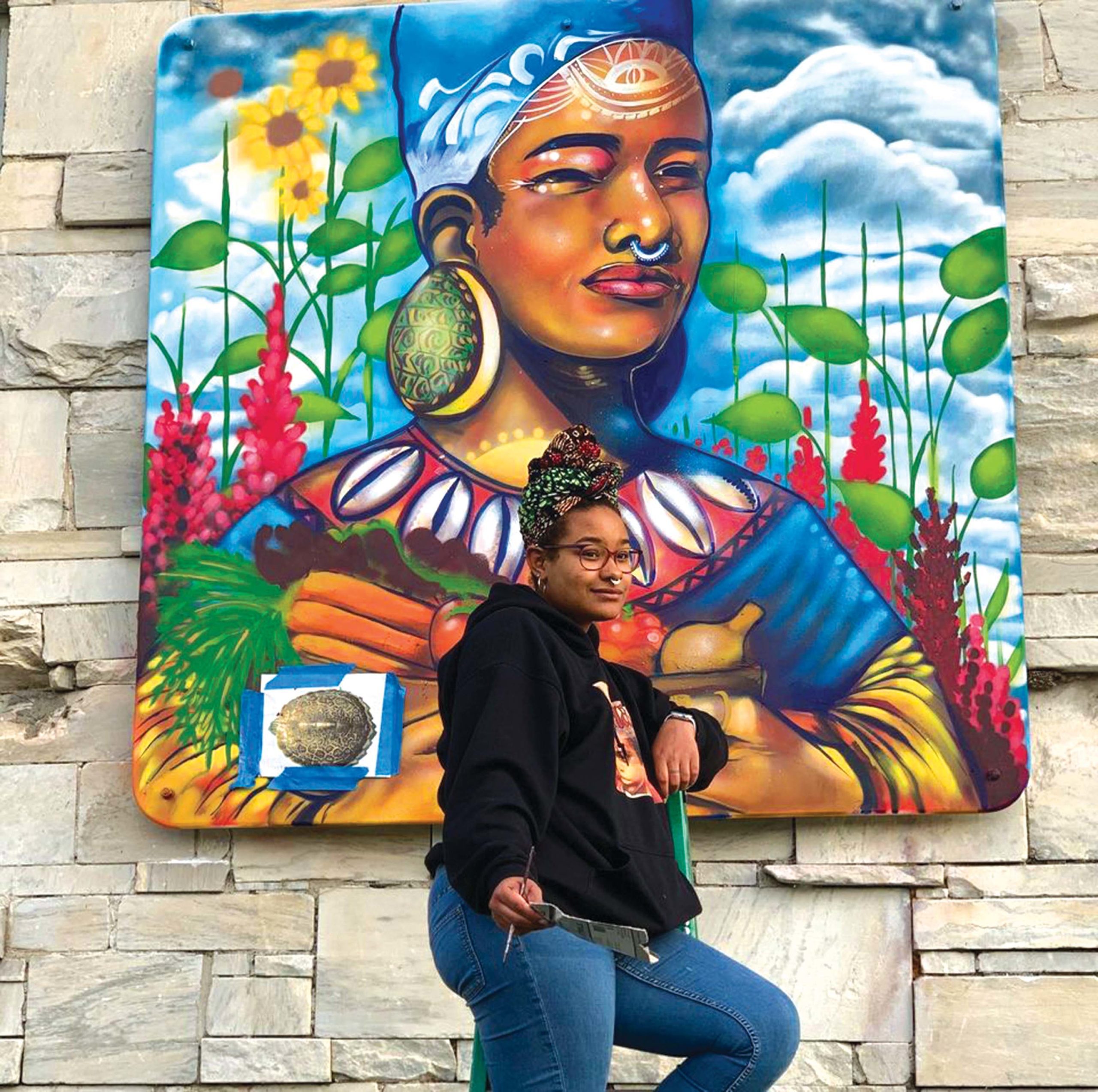 RECENT UVM GRADUATE Alexa Herrera Condry, Will and Jennifer’s daughter, is a videographer and photographer who often serves as a model for her parents’ murals, including this one at American Flatbread restaurant in Middlebury. The mural is titled, “Nourishment.” Photo by Jennifer Herrera Condry
By Lee J. Kahrs

Art plays a crucial role in how we feel our emotions. It’s essential to see us (Black people) in representations of joy and abundance.
— Jennifer Herrera Condry

BRANDON — Sometimes, if they’re lucky, when two people come together the gifts they each bring complement and strengthen the bond they form. At a time when race and activism are socio-cultural touchstones in the United States, Jennifer Herrera Condry and Will Kasso Condry are working to spread understanding and community through public art.
The husband and wife art duo moved to Brandon two years ago and formed their business, Juniper Creative, which paints large, public murals. During the recent years’ social unrest, they have been traveling throughout the region working on murals commissioned by businesses, schools and others who want to promote inclusivity and celebrate the Black Lives Matter movement.
I first encountered the couple one night in early September in the Marble Works district in Middlebury. Will was on a ladder under a white light, painting a mural on the wall outside American Flatbread restaurant. Paint spray was alive in the light as he worked on a painting for Flatbread co-owner Danielle Boyce. “They were thinking about what they could do with art that could raise Black voices in a Black experience,” Jennifer said. “A depiction not centered on death and pain and trauma.”
The painting is titled “Nourishment” and reflects the idea of the harvest and what the restaurant means to the community. It features a Black woman holding vegetables and bread, sunflowers in the background. The couple’s daughter Alexa Herrera Condry, 22, a University of Vermont graduate and a videographer and photographer, serves as the model for some of the couple’s murals, including the one at Flatbread. “It’s about love and peace and flatbread,” Jennifer said that night. “Scenes of joy and happiness centering on Blackness. It’s the beauty of art. Art plays a crucial role in how we feel our emotions. It’s essential to see us (Black people) in representations of joy and abundance.”
Because of the COVID-19 pandemic, the Flatbread mural was the first outdoor commission the couple had taken on since March, fitting it in over four days before heading to Burlington. They are currently working on a large mural at Champlain Elementary School that incorporates the character of Kelis the Afronaut, a strong Black warrior woman, and will be complemented by pieces of collage done by the school’s fourth- and fifth-graders.
At Juniper Creative, Jennifer uses her expertise and communication skills to work with clients and glean a sense of their values and priorities in designing the murals. “I’m the creative and concept designer for our business,” she said. “Then when I’m involved with the community, I’m doing active listening and asking probing questions and finding out what’s important to them. What do they want to feel, what is the iconography and symbolism that reflects their values?”
She said she and Will also get inspired by these conversations, which often redirect a concept into something even deeper than originally intended. “As we’re working on it, things start to evolve,” she said.
Jennifer, who does ceramics and is an experienced weaver, often makes the initial sketches for a mural based on those community conversations.
Given this year of civil unrest and protests over the death of Black people in police custody, the demands for social justice and the fight against systemic racism in the U.S., Jennifer said the art the couple creates is healing and necessary. “It’s what will help us rebuild,” she said. “It sends a message of optimism.”

TWO SOULS WITH A COMMON BOND
Will, 43, is a painter who works in graffiti art and airbrushing to create large, colorful murals featuring strong Black figures and others amidst symbolic and meaningful backgrounds. He studied art at the College of New Jersey before leaving to pursue art and raise a family. “Life happens,” he said simply.
Will, who came to Middlebury College a few years ago to be the Alexander Twilight Artist in Residence, began as a portrait artist, then moved into airbrushing and then graffiti art. He started a nonprofit called SAGE (Styles Advancing Graffiti’s Evolution), a grassroots organization that aimed to change perceptions of graffiti and street art. “Instead of using art to vandalize, we’re using it to rebuild,” he said.
Jennifer, 50, has worked for Middlebury College for the past 18 years in several roles, most recently as the associate director of the Anderson Freeman Resource Center. She also served as the assistant director of student activities, and as the senior advisor for diversity initiatives. She holds a bachelor’s degree in art history and business, and a master’s degree from the Middlebury College Spanish Language School.
The two met nine years ago when Will’s niece was a student at Middlebury College. Jennifer, who specializes in multicultural student affairs, was part of a team looking for a muralist to do a piece at the Anderson Freeman Resource Center depicting namesakes Mary Annette Anderson and Martin Henry Freeman. Anderson was the valedictorian of the class of 1899 and the first woman of color to graduate from Middlebury. Freeman was the salutatorian of the class of 1849 and was the first African-American president of a U.S. college.
Jennifer and Will became good friends and kept in touch via social media before becoming a couple in 2016. “It wasn’t thinking it could happen,” Will said, “but the laws of attraction have a way of pulling you back together.”
Will said the age at which they met comes with positives and negatives.
“It hasn’t been easy because we’re older and we came with baggage,” he said. “But along the way, because we are mirrors for each other, we had to push through that and come together as a unit, holding each other and recognizing when trauma is surfacing.”
That said, the couple has learned how to work through those times.
“We’re art and business, but we do the arts for our own personal enjoyment,” Will said. “So, when we have issues, we work through them creatively. She holds me accountable when I start to float off to other things. Over the years, we’ve learned where one of us starts and the other ends.”

ART FOR THIS MOMENT
The couple is booked until the end of the month. Once the Champlain Elementary Afronaut mural is complete, they head to Main Street on the Burlington waterfront to do a vaulted ceiling mural. Then they can retreat to their house in Forest Dale, which Jennifer calls their “sanctuary.”
“When we saw it, we knew it was the place,” she said. “Our neighbors are great, it’s been really nice and cordial. We’re so proud of where we live… We tell everyone we live in Brandon.”
Painting murals is a physically intense endeavor and Will admitted they are still getting their legs under them having been away from mural painting for six months. “It pushes you physically to the limit,” he said. “We’re doing what we love, but it takes its toll. We have a good time, we pace ourselves.”
Still, never has there been a more timely moment for the couples’ work and art than right now, and they know it. “Especially in a time like COVID, when people are looking to be connected, people stop by and look and want to talk,” Will said. “We paint feelings, we paint joy. It doesn’t matter who you are, we do it from a place of love.”