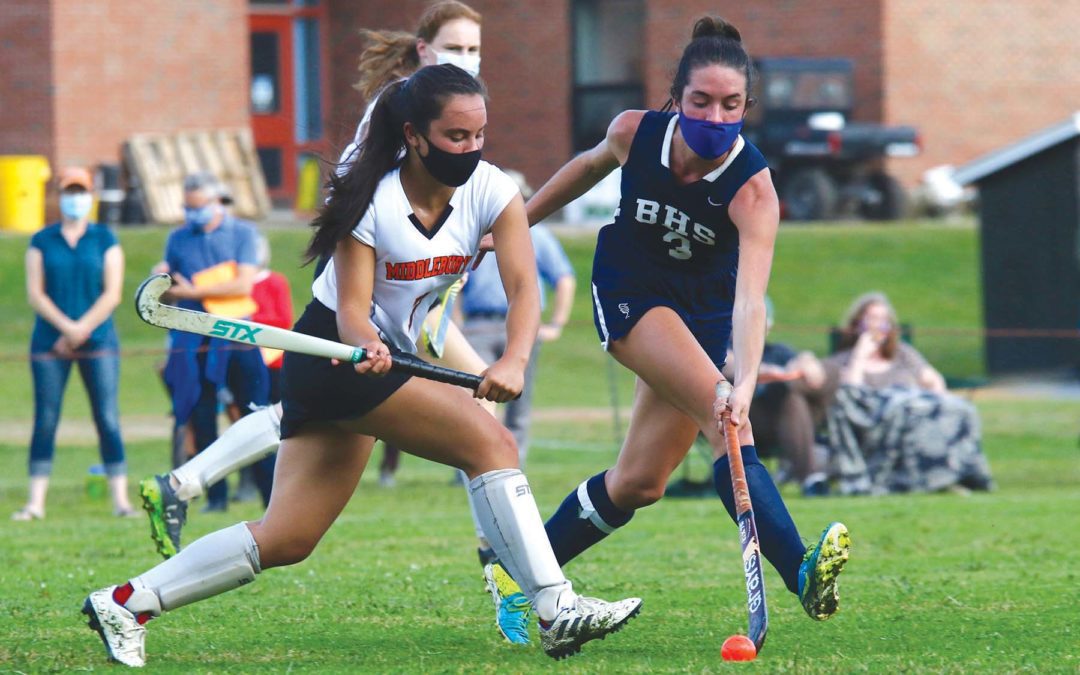 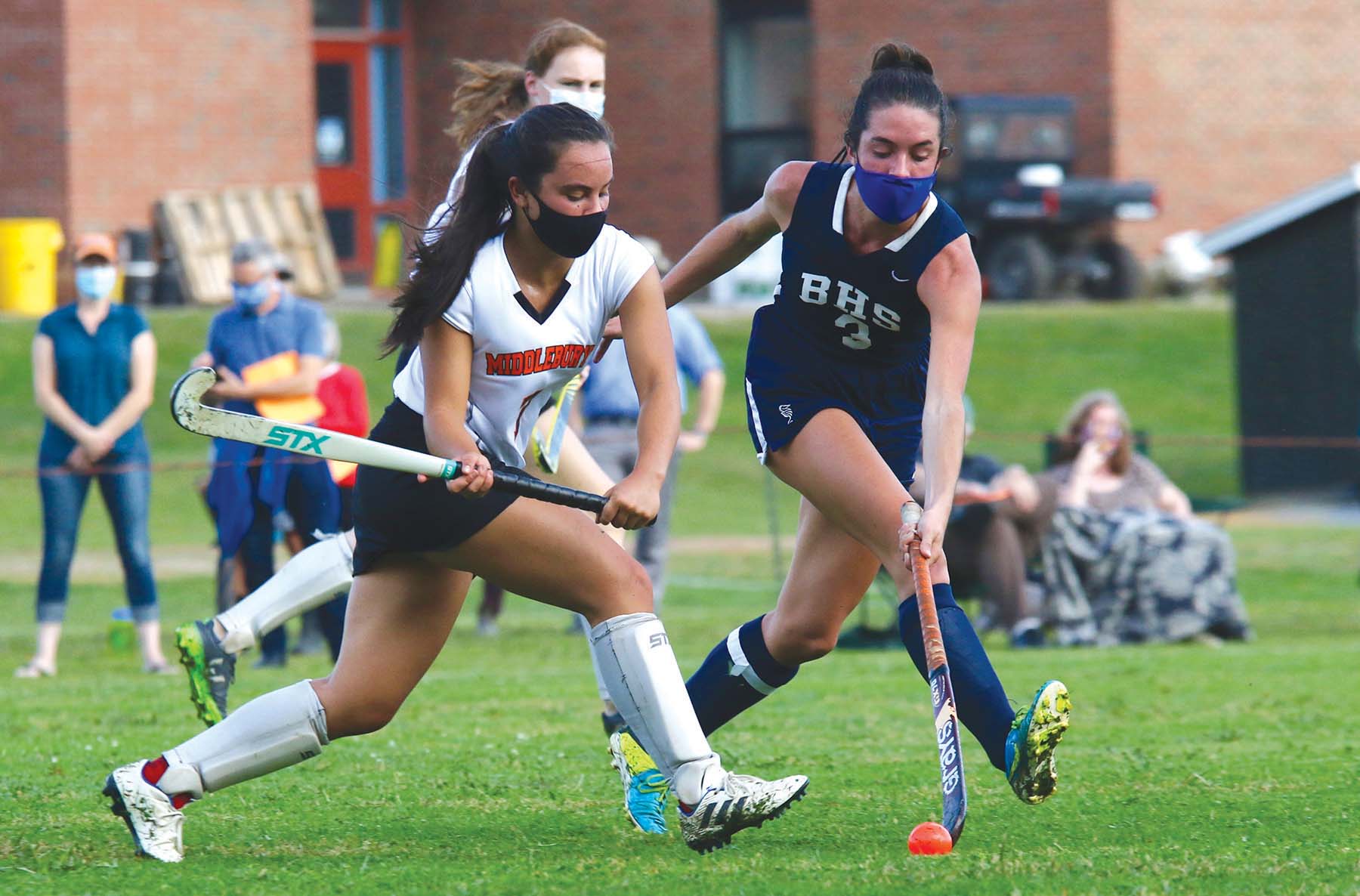 TIGER JUNIOR VIVIANA Hammond moves the ball forward against Burlington High School’s Skylar Clarke in the first half of the Tigers’ 3-0 loss in Middlebury on Monday.
By Andy Kirkaldy

MIDDLEBURY — An improved Burlington High School squad bested the host Middlebury Union High School field hockey team on Monday, 3-0, in the opener for both teams.
The Seahorses outshot the Tigers, 14-3, and broke the game open with two goals 1:18 apart late in the third quarter to take a 3-0 lead.
There were good signs for the Tigers. The defense, led by senior Lydia Deppman and junior Kenene Otis and also getting solid work from senior Sarah Nicolai and ninth-grader Erin Mulcahy, for the most part held up under pressure. Junior goalie Cassie Bettis blocked 11 shots, and senior center mid Kaitlyn McNamara supported the back line well.
The Tigers also showed signs of being able to develop an attack by working on the flanks through junior wing Patience Hanley and sophomore middie Hana Doria, who began to create opportunities for senior middie Lois Alberts and senior forward Clara Wolff in the late going.
And, said Coach Chelsey Giuliani, the Tigers played better as the game wore on.
“I was really happy to see despite the score they continued to improve throughout the course of the game,” Giuliani said. “They’re a young crew, and most of them have not played with one another yet, and we had a couple new varsity starters, and I actually thought a couple of the newbies performed really well today. And they’re a really positive group of girls, and super coachable, so I’m really optimistic about what we can ultimately do this season.”
But Monday belonged to BHS, who earned 16 corners to the Tigers’ four. Two came in the first five minutes, but defense by Deppman and Nicolai nullified those chances.
The Seahorses took the lead at 8:21 of the first quarter on the third of three rapid-fire shots near the right post. Bettis stopped the first two, but BHS senior Violet Blustein poked the second rebound home.
The Tigers had one promising rush in the quarter, courtesy of junior forward Viviana Hammond and Hanley, but the BHS defense broke it in the circle.
The Seahorses lived in the Tiger end in the second quarter and added six more penalty corners, but Bettis and the MUHS back line held firm.
The third quarter saw the Tiger defense stave off four more BHS corners before the Seahorses broke through at 3:37. Blustein stole the ball near the top of the circle and fed junior Paige Moody out front, and she pulled the ball to her left and tucked it home.
At 2:19 Moody carried the ball into the left side of the circle, and her shot through traffic found its way inside the right post, and it was 3-0.
That goal seemed to spark the Tigers. As the quarter closed Doria carried down the right side and served a strong ball in, forcing BHS goalie Elise Hollway to come out and kick it away from the Tiger attackers.
Then the Tigers forced four corners in the first seven minutes of the final period, with Hanley, Alberts and Doria doing good work. The best chance came on the second one, but Hollway made a brilliant point-blank blocker save on Wolff’s bid at the left post.
“In the fourth quarter we started using our transfer balls, so we started getting a lot of forward mobility that we were just not getting in the first three,” Giuliani said. “And I thought our midfielders, Hana Doria and Lois Alberts, were really critical in moving the ball upfield and then my attackers in the fourth quarter were in great position.”
Giuliani added that maybe it took her young team until the fourth quarter to gain the confidence it needed to match the Seahorses’ pace and intensity.
“It’s not because they couldn’t hang with them, it was just that adjustment,” she said.
Giuliani also credited BHS.
“I thought their one-v-one skills were very strong, and they had great presence in front of the net,” she said.
But, Giuliani added, “I would love to face them again at the end of the season after a little more development and time, which is all I think this team needs.”