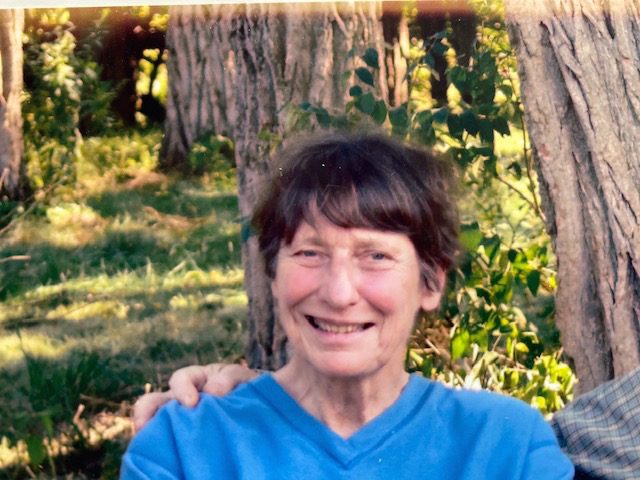 SALISBURY — Barbara J. Chamberlain, loving wife of Erling W. Chamberlain, and mother of seven children, passed away in her sleep at home on Sept. 8, 2020, at the age of 87.
Barbara was born in Queens Village, N.Y., on June 1, 1933, to Ernest and Pearl Blau. She was pre-deceased by her older brother, Ernest.
Growing up in Queens Village, one of her favorite pastimes was playing ball with the neighborhood boys. As the only girl on the team, and the best short-stop in the neighborhood, Barbara sometimes found herself rushing through her piano practice to go play ball.
Barbara graduated from Barnard College in New York City, and then got her master’s degree in Geology from Columbia University. She taught geology at Hunter College and Vassar College until moving to Vermont.
While at Barnard, Barbara joined a Lutheran group. The Lutheran group would have get-togethers with the Christian group, which is how she met her husband Erling William Chamberlain. They got married on Aug. 25, 1957, in Cape Cod.
Barbara’s love of geology and Cape Cod eventually lead her to write a book about the geology of Cape Cod.
In 1960 they started their farm in Salisbury, Vt. and named it Stonehenge Farm after the notable Stonehenge in Salisbury, England. They adopted seven children, six boys and a girl. Along with raising and homeschooling the seven children, Barbara also oversaw the day-to-day running of the farm.
Barbara was an active member of the Salisbury Congregational Church for many years. She hosted the annual Church picnic, which always included a huge game of ball. She helped at the annual ice cream social and the Christmas pageant. When the Christmas pageant would come around, Barbara would occasionally provide a farm animal for the manger scene, one year even providing a donkey.
Never without a camera, Barbara was able to capture her passion for life through her photography. Over the years she captured many an amazing moment with her camera. Her love of life and all things natural is seen in the thousands of photographs and videos she kept from the farm and all of her trips. Her love of nature later led her to write a photographic book about her cat and its adventures around the farm, for her children and grandchildren.
One of Barbara’s many gifts was her ability to quote scripture, poetry, and sayings, from memory. When her children were growing up if there was a saying that could go with a moment, Barbara would quote it from memory.
Barbara had a love of music from an early age. She learned how to play the piano as a young girl. Oftentimes she would play the piano while her children gathered around and sang. She also played the cello and enjoyed getting together with friends and family and playing music. Because of her love of music and books, she wrote a musical, based on a children’s book, for her husband.
She was passionate about education. Even though Barbara taught geology at Hunter and Vassar, she was far more of a teacher to her seven adopted children. To Barbara and her husband, education was the foundation for a good life. While raising their seven children the opportunities to impart knowledge and wisdom were abundant. The seven children were all home-schooled up until high school. A walk in the field might turn into a lesson on wildlife; a trip to a mountain could be a geology lesson; a trip to a different country would be about history and foreign languages, and different cultures. Barbara was always a teacher, providing guidance and always looking for educational opportunities for herself, her husband, and her kids.
Barbara is survived by her husband of 63 years, Erling W. Chamberlain of Salisbury, Vt., and seven children: David Chamberlain of Milton, Fla., and his children, Mikaela and Julia, and his wife Cynthia, and Mikaela’s son, Preston; Jacob Chamberlain of Salisbury, Vt., and his children, Rachael and Marissa; John Chamberlain and his wife, Erika, of Falmouth, Maine, and their son, Karl; Benjamin Chamberlain and his wife, Lauris, of Bristol, Vt., and their son Linwood and his wife Katie; Sophie Strout of Limington, Maine, and her husband Kevin, and their children, John, Caleb and Inger; Joshua Chamberlain and his wife Maija, of Bridport, Vt., and their children, Samuel, Rebekah, Elizabeth, Emily and Katherine; and Timothy Chamberlain of Lunenburg, Mass., and his children, Hannah, Meaghan and Kiley.
A private graveside committal service and burial will take place, at a later date, in Holman Cemetery in Salisbury.
Memorial gifts in lieu of flowers may be made, in her memory to Addison County Humane Society, 234 Boardman Street, Middlebury, VT 05753.
Arrangements are under the direction of the Miller & Ketcham Funeral Home in Brandon.◊