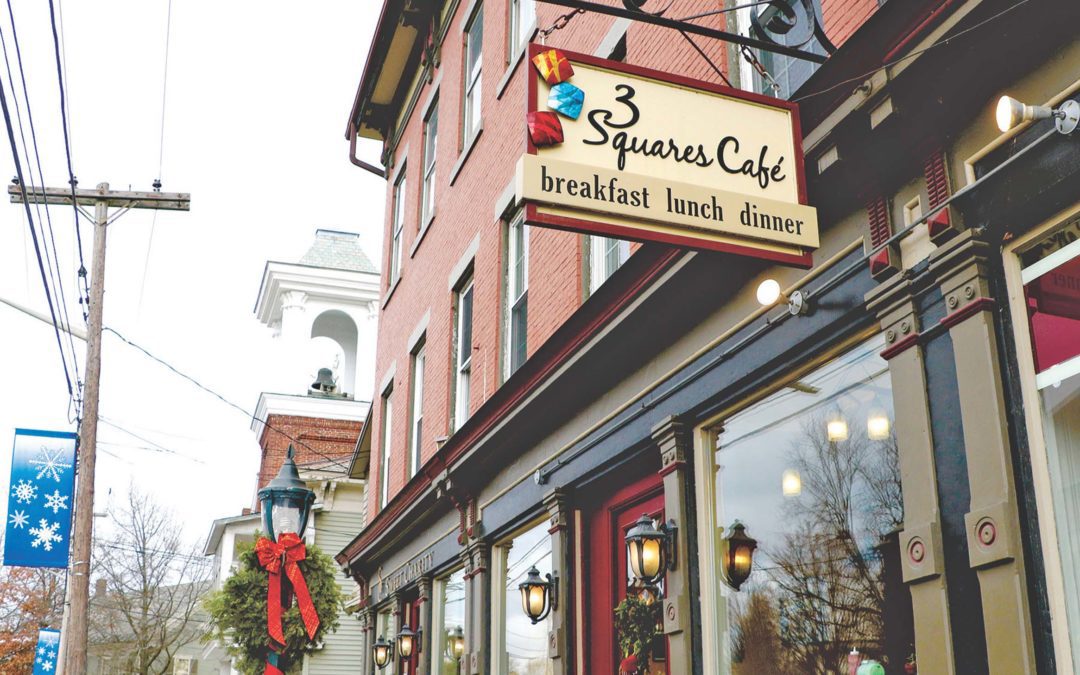 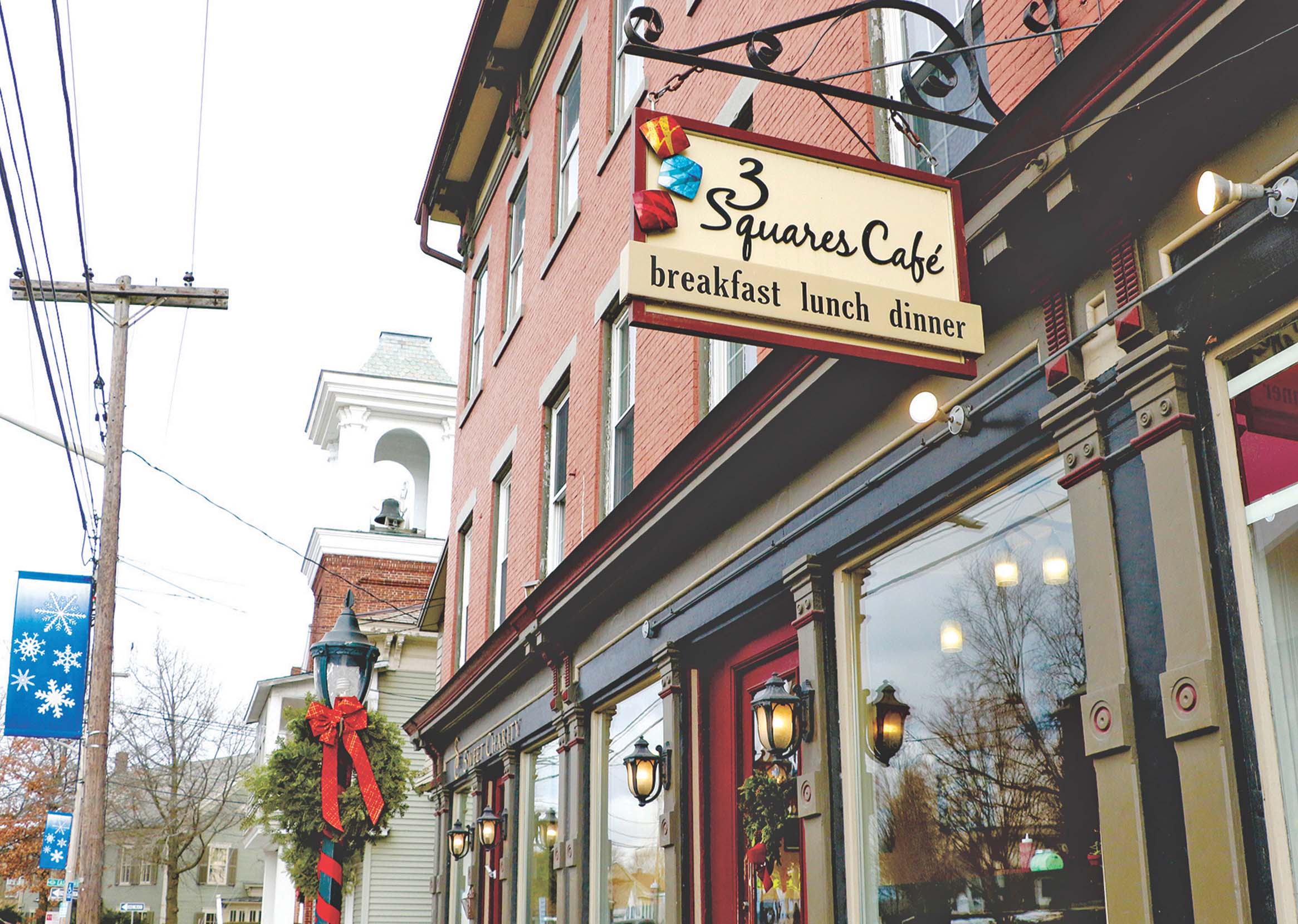 BAR ANTIDOTE OWNER Ian Huizenga, with help from 3Squares Café owner Matt Birong and the Boys & Girls Club of Greater Vergennes, is spearheading a new free meals effort that will begin in the city area and could spread wider in Addison County. It will run through at least December and also employ a number of restaurant workers, all thanks to a state-administered federal grant.
By Andy Kirkaldy

It helps everyone involved. It goes toward our overhead. I’ll be able to bring staff back at a pretty good rate, too. We’ve got a pretty good food budget. Obviously, it’s not designed to be profitable. It’s kind of a break-even thing.
— Bar Antidote owner Ian Huizenga

VERGENNES — A new effort set to begin on Sept. 14 will provide hundreds of free meals to residents in need in the Vergennes area — and possibly beyond at some point. It will also provide jobs to a number of cooks from downtown Vergennes restaurants.
The effort, supported by a $181,000 “Everyone Eats” grant — funds that came from the $5 million awarded to Vermont from the federal Coronavirus Relief Fund to support the program — will be overseen by Ian Huizenga, owner of city eateries Bar Antidote and Hired Hand Brewery.
Boys & Girls Club of Greater Vergennes interim administrator Cookie Steponaitis wrote the grant application to the statewide Everyone Eats program.
The club, which served thousands of meals to those in need around Vergennes between March and August — with technical and logistical support from Huizenga and Bar Antidote — will also serve as the contact point for those interested in receiving meals.
Huizenga also credits 3Squares Café owner Matt Birong and chefs of both restaurants — Eric Montgomery from 3Squares and Dustin Simmons from Bar Antidote — for helping both programs take flight.
He said their work to help the club’s effort succeed — it served food based on a menu worked on by the restaurant pros and stored at Bar Antidote, prepared in the Vergennes United Methodist Church’s basement kitchen, and delivered by volunteers — paved the way for the new program.
“We already had this template in place,” Huizenga said.
The new program will be different. The grant will pay $10 per meal produced, allowing Huizenga to pay cooks and delivery people from the hard-hit restaurant sector a decent wage, up to $16.50 an hour. To start with about a half-dozen will come aboard.
The larger point, he said, is that the program creates jobs while helping those in need.
“It helps everyone involved. It goes toward our overhead. I’ll be able to bring staff back at a pretty good rate, too,” Huizenga said. “We’ve got a pretty good food budget. Obviously, it’s not designed to be profitable. It’s kind of a break-even thing.”
The Boys & Girls Club is happy to continue to help out, although with the club reopening for members this week it could not also operate a meals program.
Club Programming Director Steven Maluenda said meals program volunteer Sue Hameline will coordinate outreach, client communication and delivery routes for the new effort. Hameline will also serve as the club’s liaison with the Bar Antidote crew.
“We want to make sure anyone requesting a meal has a point of contact,” Maluenda said. “The more people we can touch and provide meals for if they need, the better.”
Maluenda said anyone interested in the meals, whether previously served by the club program or not, should go to the club’s website — bgcvergennes.org — and sign up. Maluenda said the website has a link dedicated to the Everyone Eats program with registration forms and information.
Huizenga said Bar Antidote and Hired Hand will continue to be open for sit-down business — outside — as long as weather permits.
But once cold weather arrives, the restaurants will be dedicated to takeout and Everyone Eats.
“We’re just going to combine the Bar Antidote and Hired Hand menus, and we’re just going to do takeout once the outside dining is done. So my entire restaurant has the capacity to handle large amounts of volume,” he said. “My dining room is going to turn into essentially a production line. We’ll be getting staff from Matt (Birong).”
That also means his restaurants will have plenty of production capacity. Huizenga expects to start on Sept. 14 with about 200 meals a day, but he believes demand will rise and to be able to meet it with a larger crew of up to about 10, including drivers.
“We’re hoping by the end of September, early October, we should be up to 2,000 meals a week, with the possibility of going up higher,” he said.
Initially, the program will deliver to Addison, Ferrisburgh, Panton, Vergennes and Waltham. But those involved are thinking bigger, especially after looking to Hunger Free Vermont for more mouths to feed.
“We’ll be looking to expand to whatever Hunger Free Vermont comes up with. We’re looking for added partners with people who need assistance. We could easily go to Monkton, Bristol, those five towns, or shoot down 22A,” Huizenga said. “We’re really trying to help be a hub in Addison County. We’ve also reached out to a couple of other restaurants in Middlebury in case this gets larger.
“Once we get a couple weeks under our belts, I think we could coordinate a county-wide system pretty easily.”
The initial grant will support the program just through Dec. 13, but Huizenga doesn’t see the need ending there.
“We’re hopeful this will go through April, to really get people in need through,” he said. “I think all of us know we haven’t seen the worst of it yet, because we were at the end of flu season last year when this started. Now we’re going into it. Child care is up in the air. School is up in the air. Parents need two full-time gigs to support people. I think the real hardship is going to be coming now.”
Huizenga is looking to national politicians to get their act together.
“I think this is going to come out of the second round of stimulus,” he said. “I’m hopeful. This isn’t just a New England or Vermont thing. This is a country-wide thing.”